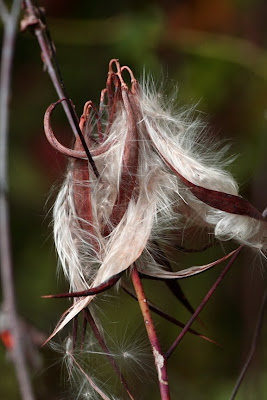 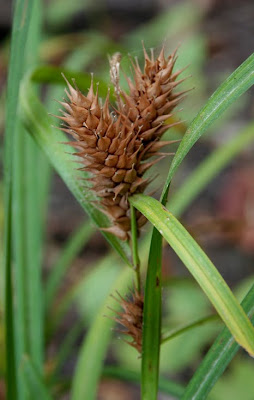 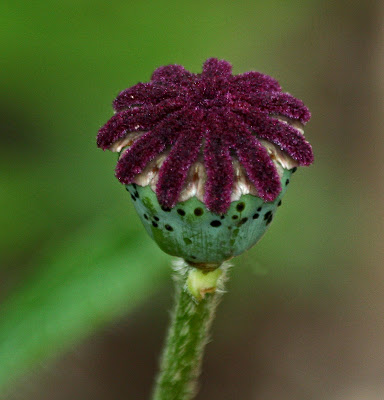 (Since I am now on travel, I have decided to leave a few pre-posts for gentle mental reflection.)  Above is last spring's poppy seed head, a peaceful example of divine symmetry.
Posted by Tabor at 2:54 AM 7 comments: 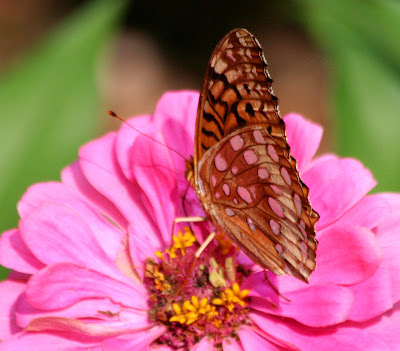 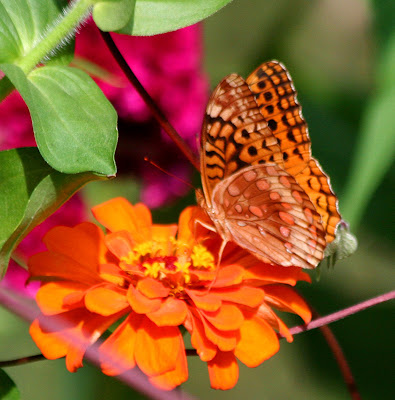 If you look ever so closely and compare the two photos above, you will see that this butterfly's spots reflect the color of zinnia petals on which he rests. That is a really nice ability.  Don't you wish we could so easily reflect the beauty of those around us?
Posted by Tabor at 12:00 PM 8 comments:

I Told You So. 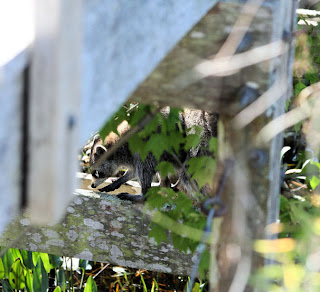 " I told you that fall was just around the corner.  Cold weather is breathing down our necks!  But, oh no, you have to spend time playing with that stupid muskrat, collecting shells on the shore, and pretending that you can out scream that fat old owl at night!  Now look at our situation!  We have no fruits or nuts tucked away, you missed the harvest on the wild paw paw tree, and perhaps worst of all, you believed that Tabor women when she said that was not a fig tree in her front yard...just a tree with big leaves.  What was she tucking in her apron then?  I ask you!" 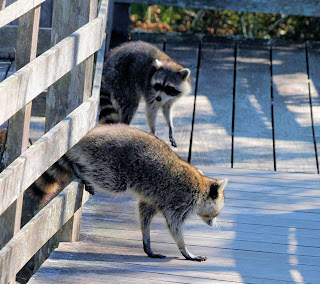 "Hurry up.  We don't have all summer.  The leaves are falling."


(I will be traveling in the week or so ahead...please keep an eye on these little thieves!)
Posted by Tabor at 10:17 AM 15 comments:

This crowd hangs out frequently at the private dock in this cove.  It is a mixed bag of sea birds,  seagulls, cormorants and the rare pelican. 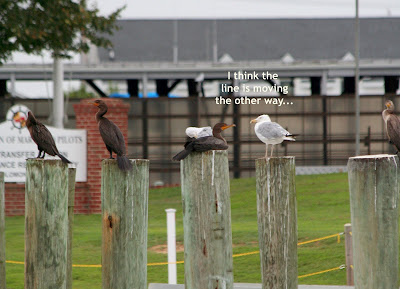 Seems to be some confusion today.
Posted by Tabor at 7:01 AM 19 comments:

CPR But Not Mouth to Mouth...Eeewww!

We found this little fellow in the crab trap the other day.  Crab traps are supposed to have turtle excluders, and ours does, but this diamond-back terrapin got caught somehow.  We estimate he was held under water for perhaps 5 hours.  This looked like a dead terrapin, but hubby is stubborn and watched and saw a tiny movement....

Here is hubby giving CPR after clearing the water inside his lungs by holding him head down for a little bit.  Hubby would gently press on the back carapace and then wait about 30 seconds or so.  (We could have checked on the Internet for proper procedures, but time was of the essence.)

After about ten minutes of this process the turtle lifted his head and sucked in air. (I think he was also smiling.)  While he remained very lethargic, although degrees of lethargy are hard to determine in turtles/terrapins, he continued to lift his head and breathe in air every once in a while while hubby continued the CPR.

Once we determined he was definitely alive but still weak, we kept him in a cooler on the deck overnight with a little fresh water and some fish food. He was definitely too weak for release that evening.  By sunset he had pooped!  Those of us who have raised children know this is a good sign.

When we checked on him the following morning, he responded as all terrapins and turtles should respond, with total introversion of every appendage.  (Go Away!)

We released him into the grassy edge of the river and he was extremely happy.  He tucked under a stick and would pull his head above the water's surface every once in a while.  We went to check out crab traps and upon our return just a minute later he had disappeared into the river.  Hubby saves another life! 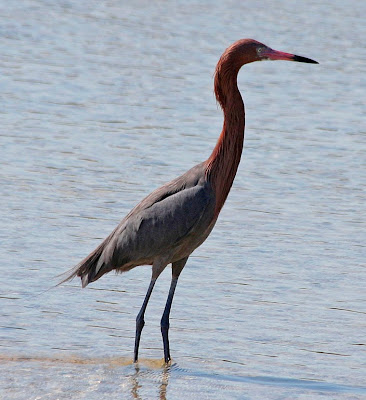 I reduced the size of this photo for memory space issues with Blogger, but I think you can still see how interesting and different this bird is. This is first reddish egret I have ever seen and photographed.  I thought at first that is was a heron because it was so large...but the stabbing bill is supposed to be the give-away if my research understanding is correct.

This was taken in Florida a year or so ago. I am having company so I am posting this just to keep this blog up-to-date.
Posted by Tabor at 10:25 AM 7 comments: