Thought I would share photos I took of a few of the leaves that have left this past month. 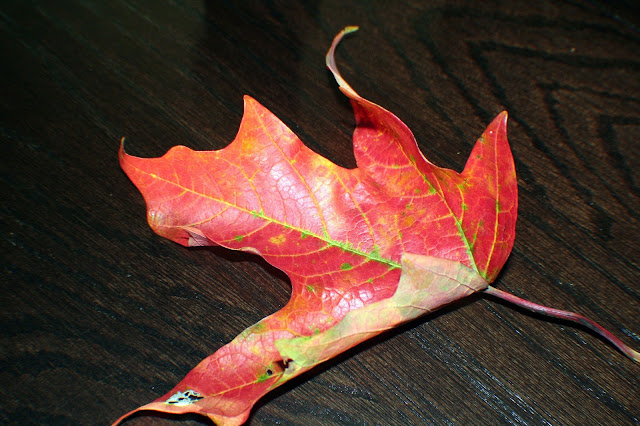 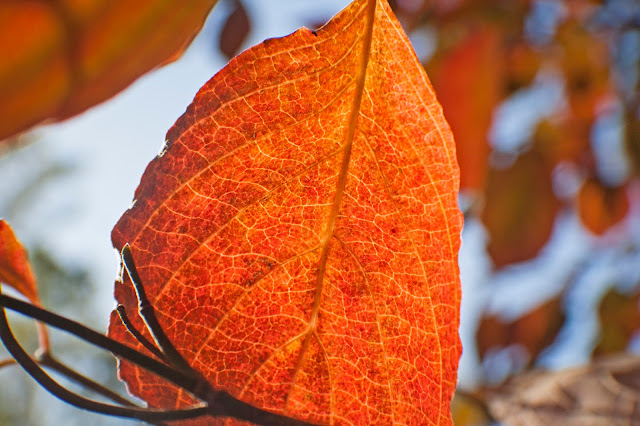 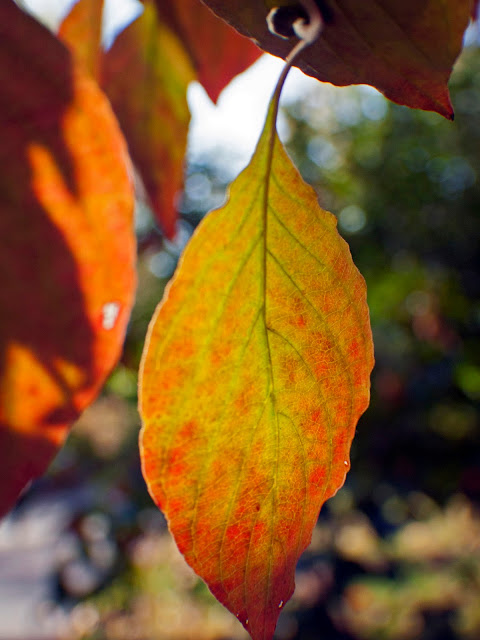 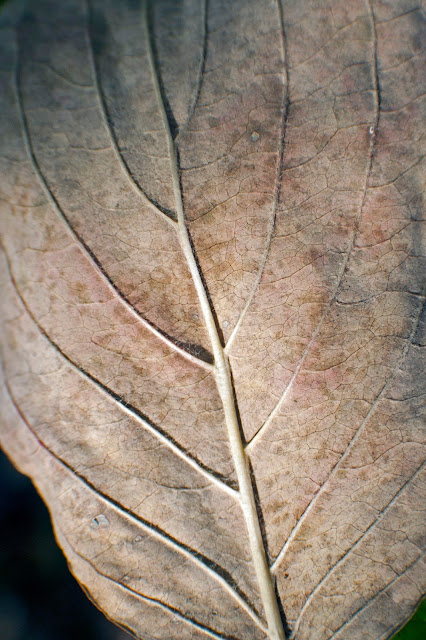 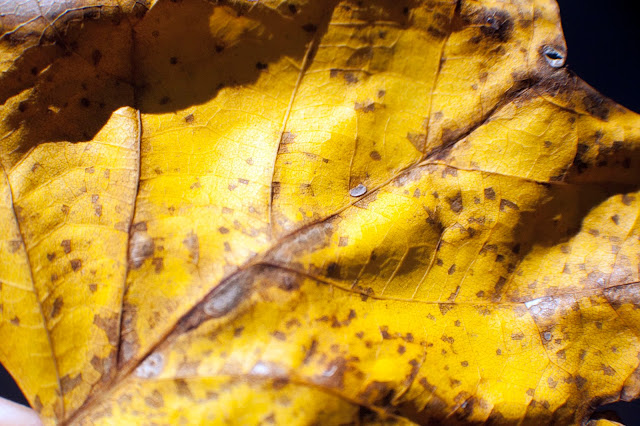 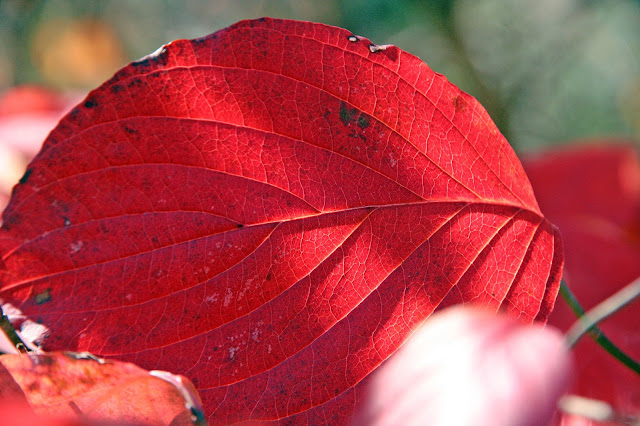 This golden time of year has been gentle and ever so slow in our woods.  I usually blink and we go from brilliance to gray silhouettes and bruising cold winds.  We patiently wait for a winter snow that comes late and sometimes lasts only a day or two. 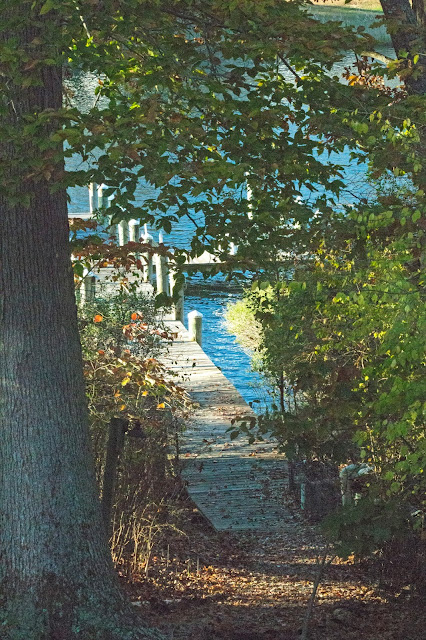 But this November is transitioning into an "Indian Summer" as December slides on in.  The earliest source of the expression according to the ubiquitous Wikipedia is from an essay written in the United States in the late 1770's, perhaps based on a Native American description of a warmer than usual hunting season.  With the warming of the planet, these Indian Summers will be even more common.  The angle of the sun turns the water that unusual turquoise blue that is most often seen in the high mountain lakes of Canada rather than the rivers of the Mid-Atlantic.  The green algae have sunk to the bottom and the sunlight filters pure. 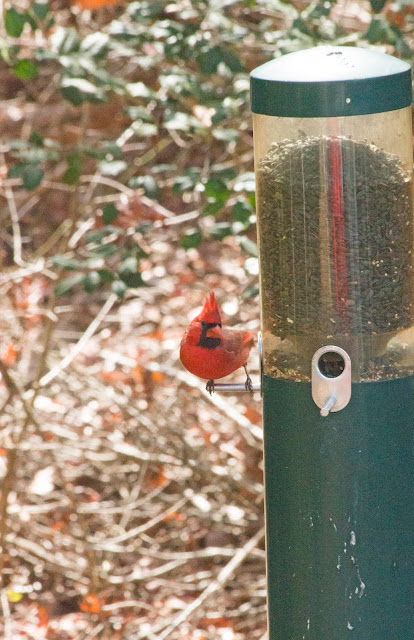 Not many birds come to the feeders as the weather is warm and they need fewer calories.  I count birds for Cornell and my numbers are going to be small this fall.

I harvest an abundance of persimmons as I watch the oak leaves sail like golden-brown kites across the yard and glide to my feet. 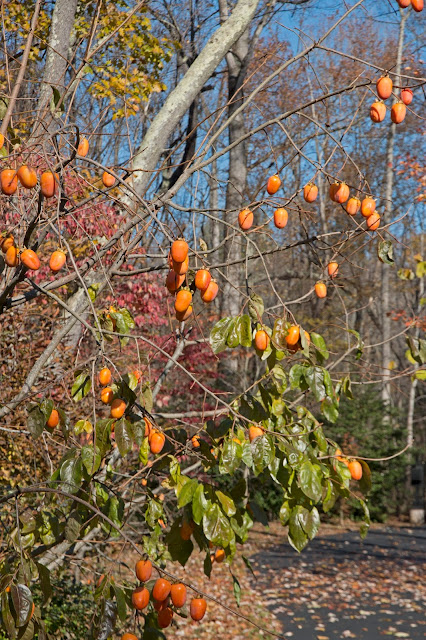 The lawn has been covered in outdoor carpeting and I like it that way.  The first to arrive were the red maple leaves. 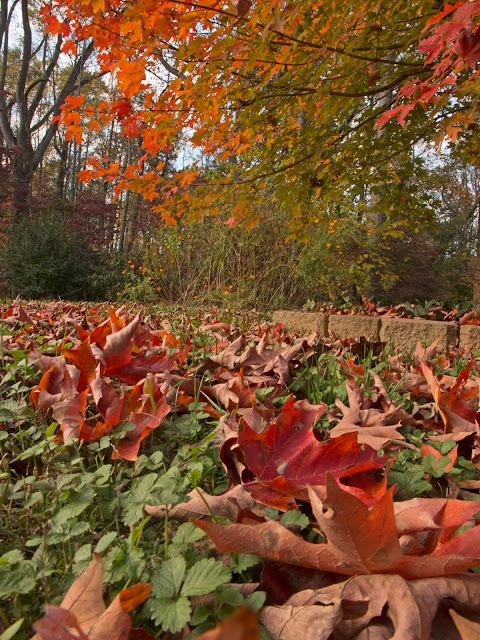 This was followed in a week or two by the leathery oak leaves creating a brown carpet in the backyard hiding the path to the dock under a crunchy sound alarm, making it impossible to sneak up on the waterfowl for photos. 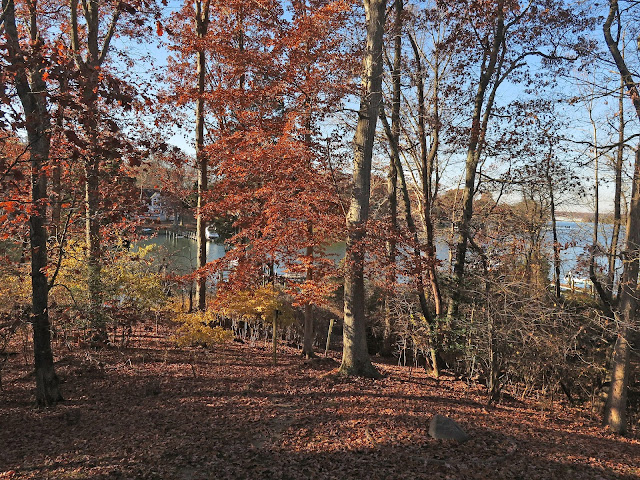 No complaints on my part.  All is well in the season of autumn.  I can be patient.

That Time of Year

We are easing into that time of year for the fall and winter holidays. Strenuous for some and a celebration of joy for others. I have little work to do this year other than shop for gifts. Thanksgiving is being done mostly by others.  My expectations are low which is a peaceful place to be.  So, I am going to go to my happy place and enjoy the wonderful fall weather we are having and select a blessing each time I snap the shutter. 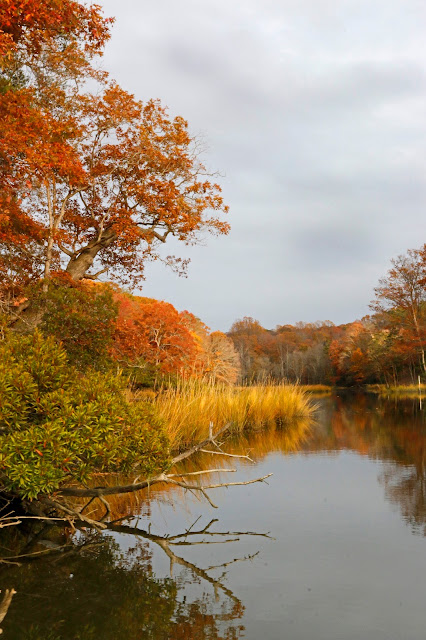 I am blessed to have the time to follow the birds and plants and their changes on this land as they head down for a long winter's sleep or at the very least slowing down. 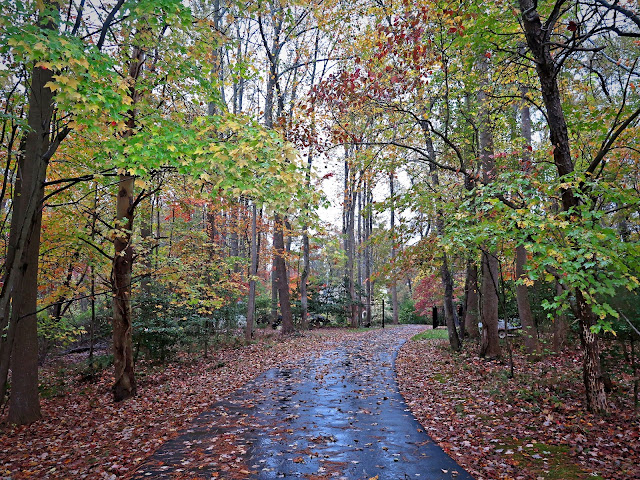 I am blessed that the rain this year has come at all the right times and pretty much in the right amounts. 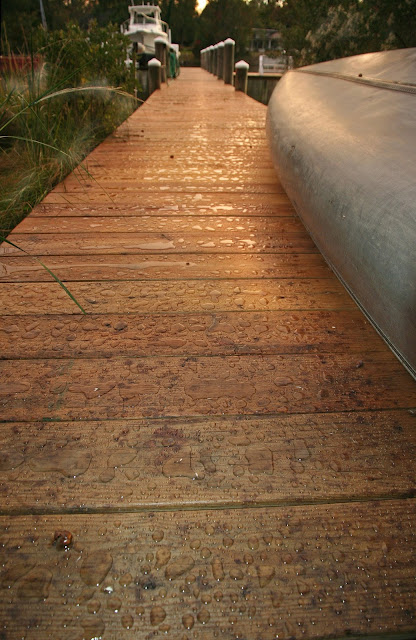 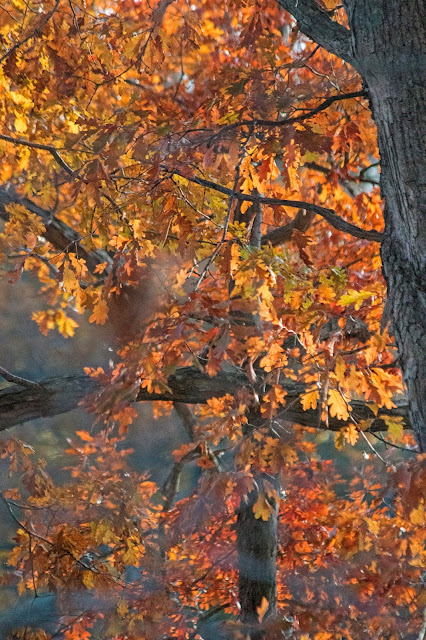 I am blessed to have these giant oak trees as friends that put on such a show throughout the year. 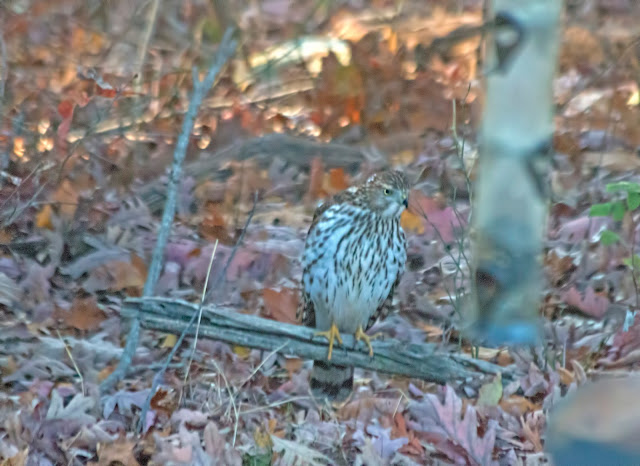 And I am blessed to have to rare hawk stop buy to shop for food.  Have a peaceful and healthy Thanksgiving!
Posted by Tabor at 11:17 AM 10 comments:

When I bought and planted this sugar maple tree, I was told that the climate warming changes to my state meant that the tree would really struggle as the winters became less lengthy...and perhaps less cold.  I was told this was not the place to plant such a northern tree.  I did not care because I just love how this pioneer catches fire each and every fall never failing to warm my soul.

Please note that the colors in these photos are what the camera was able to capture with no color boost! 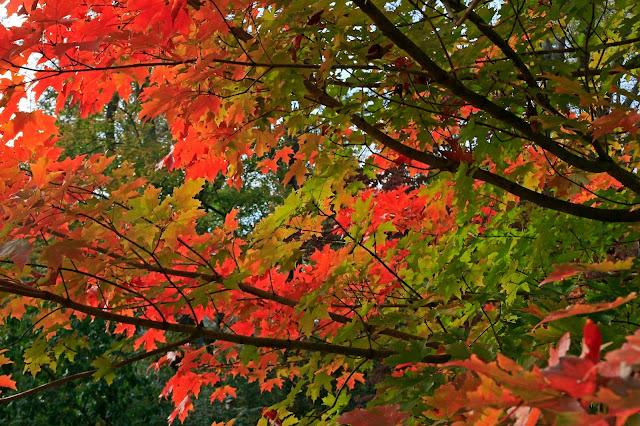 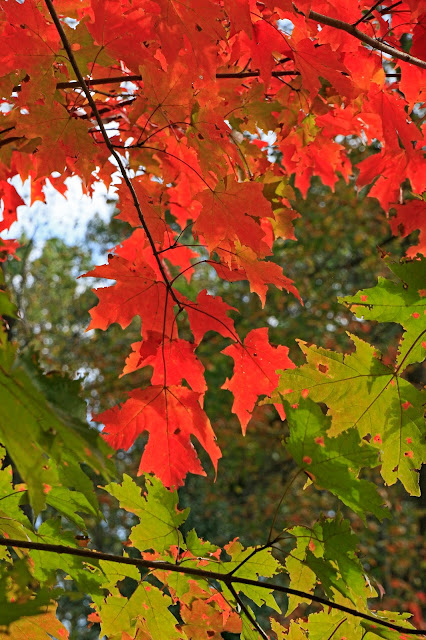 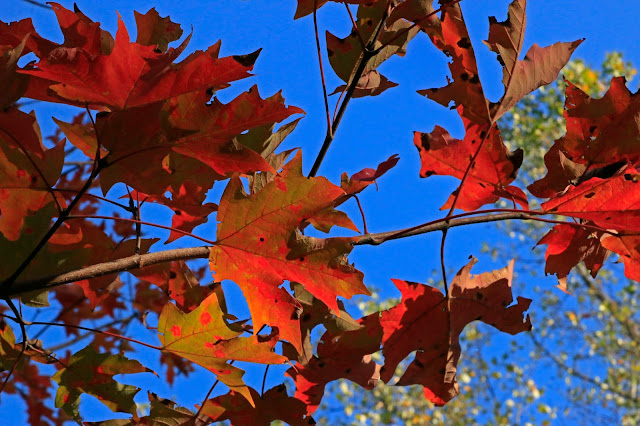