The last of my ice fairy photographs. I took snow boots in hand, without treds(!), onto the icy road and docks, but found it was not as slippery as I expected. And the walk was so worth it. The sun was just coming up adding a soft pink to the ice on the wooden structures. At the dock the sun kissed the tops of the trees and then I was also able to get a lovely sunset as the winter day moved onward. 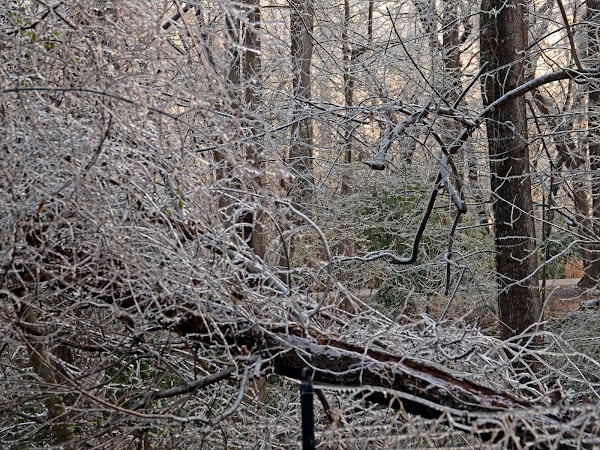 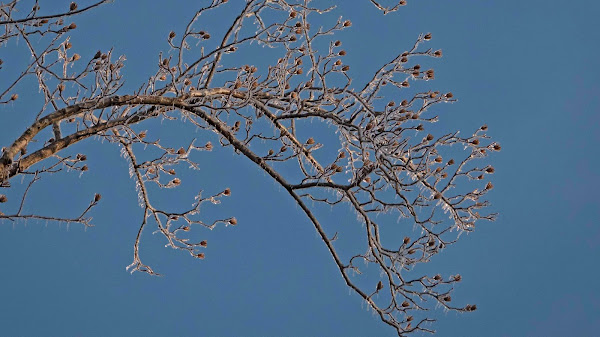 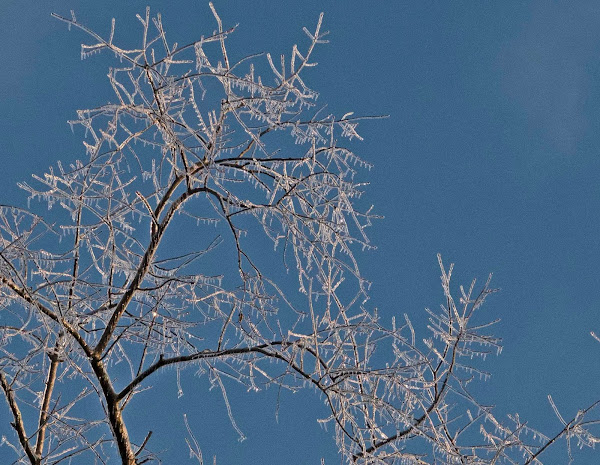 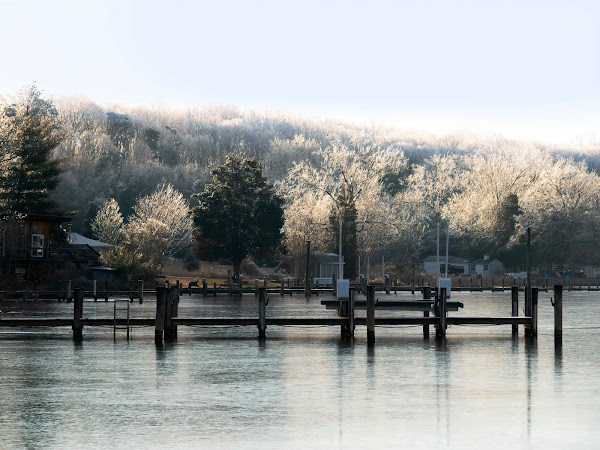 The days ending looked much warmer than it actually felt. 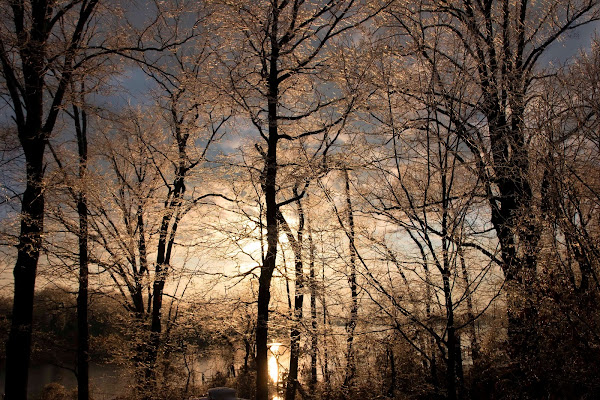 A Break From the Monotony of gray

We did not get above freezing for several days. Even today, with all melted, the air is very crisp and I am staying indoors. Here are a few more photos of the lovely icy artwork that Mother Nature is so famous for. 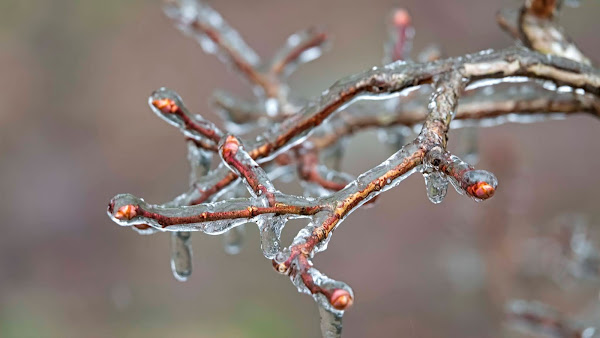 If you look closely, there is still a lot of color out there. 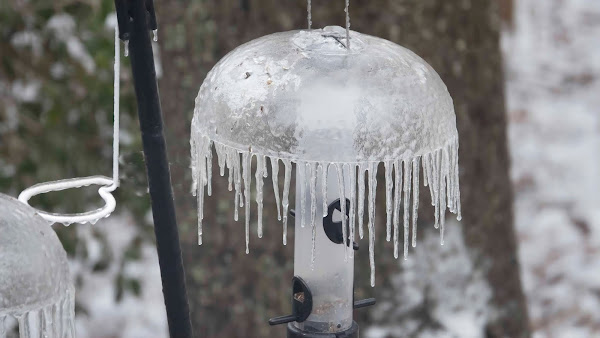 The birds were feeding each and every day and I should buy stock in birdseed. 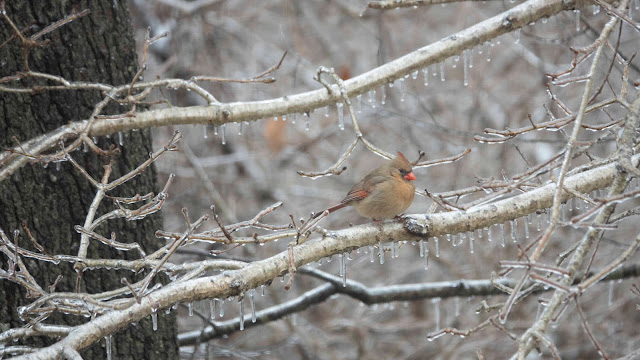 Above I had fun with layering to bring out the female cardinal. I am always amazed at how they weather the weather!
Posted by Tabor at 10:47 AM 12 comments:

While much of the central southern United States is under a stressful and dangerous winter, the edge of that storm just touched us, touched us with beauty.  Temps rarely went about freezing and while those who ventured out may have regretted it, we stayed in our little woodlands and watched the ice fairy paint over all the shrubs and trees.   We did lose electricity for just ten minutes and were so thankful.
This morning as I write this, the crackle of ice as it slides from the naked arms of tall trees and hits the ground makes for a noisy morning.  While the temperature is still 27F that wind is pushing the ice off.  Some of the icing is hard and jagged and you would not want it hitting you on the head! 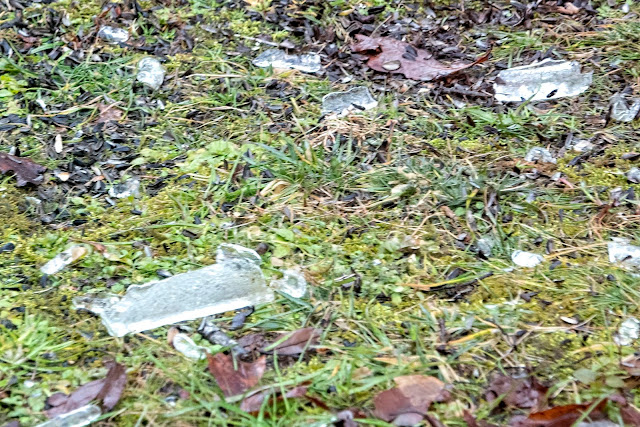 All the same, it made for an excellent opportunity to carefully walk across the less slippery areas and take photos. 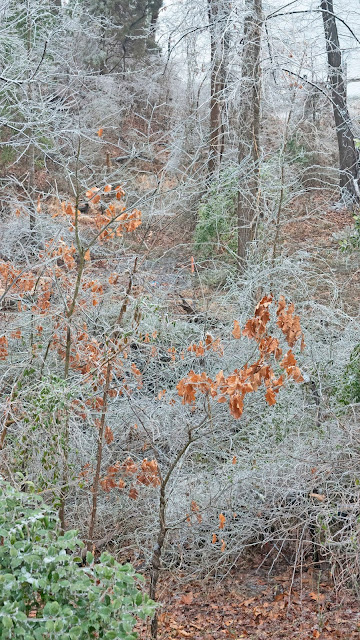 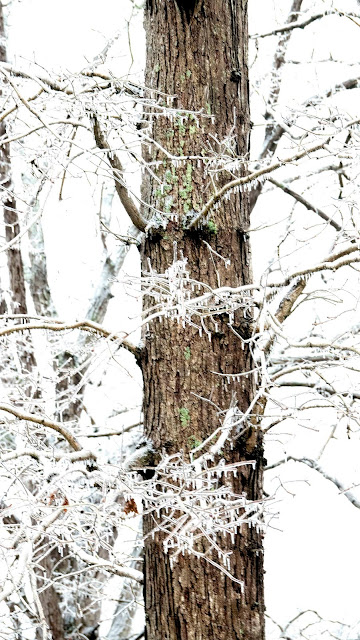 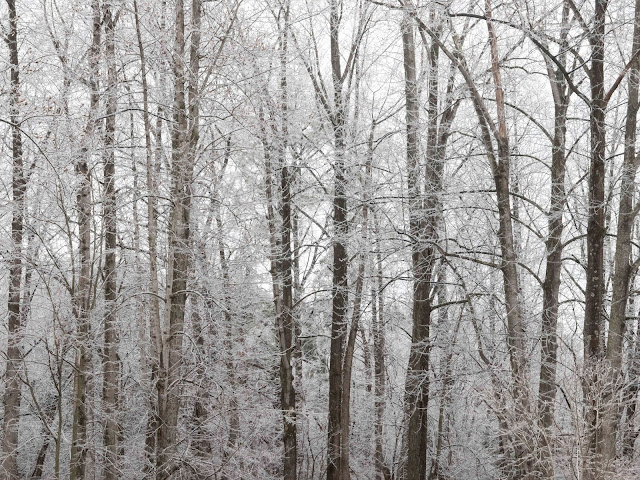 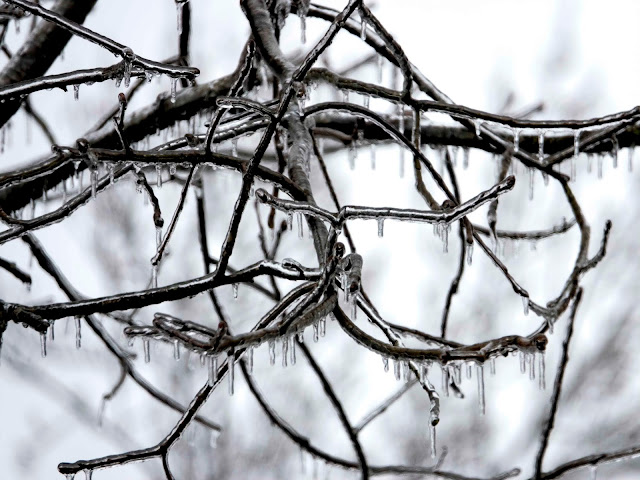 Now I must head back inside for something warm to drink.  In the next post I will share some lovely sunrise and sunset colors against the ice which was with us for several days.
Posted by Tabor at 10:45 AM 15 comments: 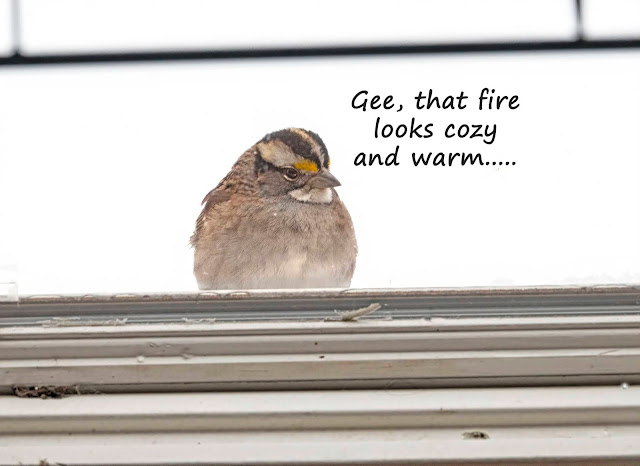 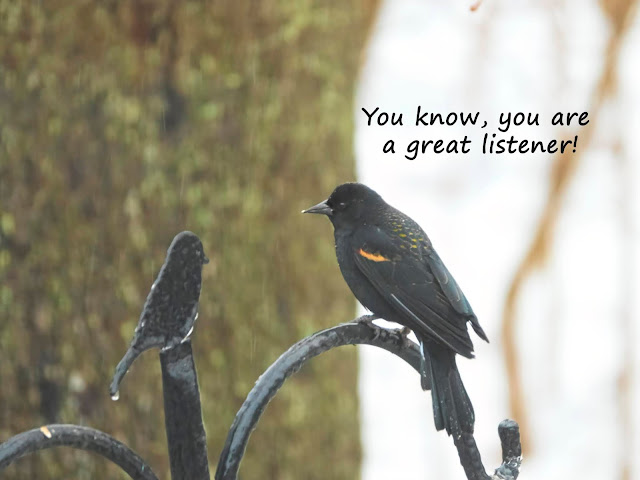 That is what teenagers now say when things are too weird to understand or believe. Without going into details, that has been my week. So to move away from "cra-cra" I will post some photos of the lovely white dust that decorated us this past week and forced us to slow down. We are a little too excited because this is the first snow in years that was visible and lasted.
It started light and with very small snowflakes. 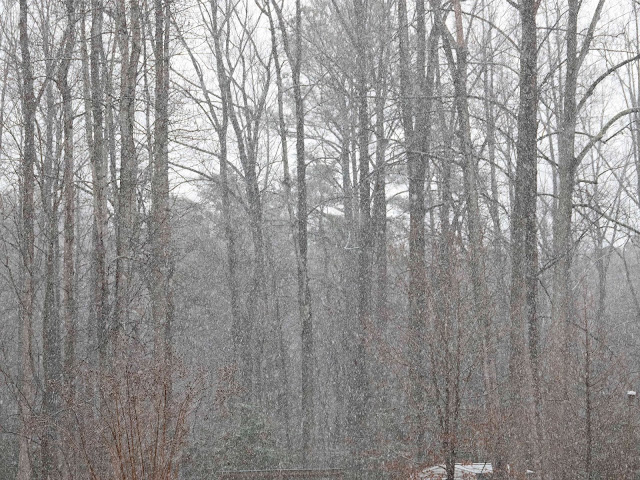 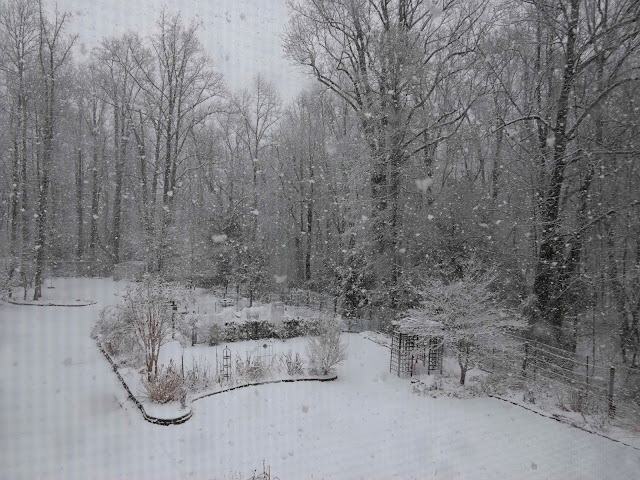 Above taken through a screened window from the second story.  You can see the flakes getting larger and starting to cover everything. 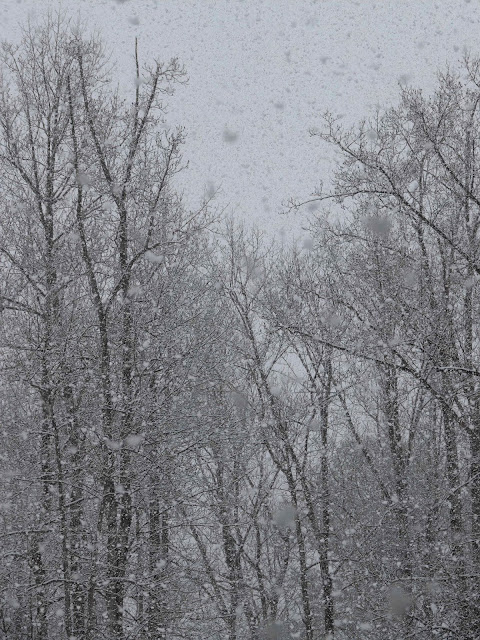 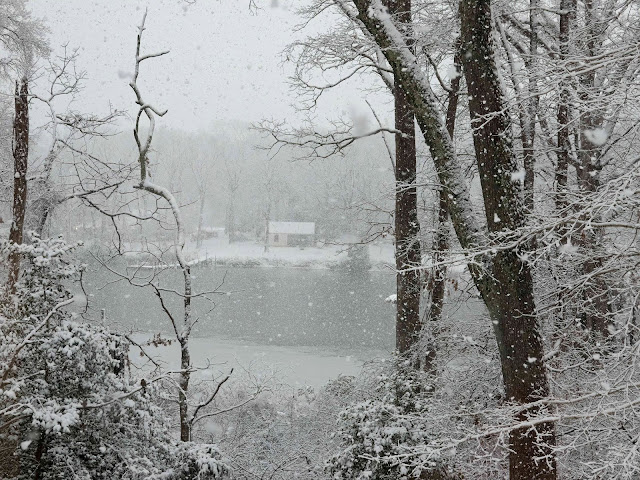 Soon the scene across the river was starting to become hidden behind the flakes as large a duck feathers. 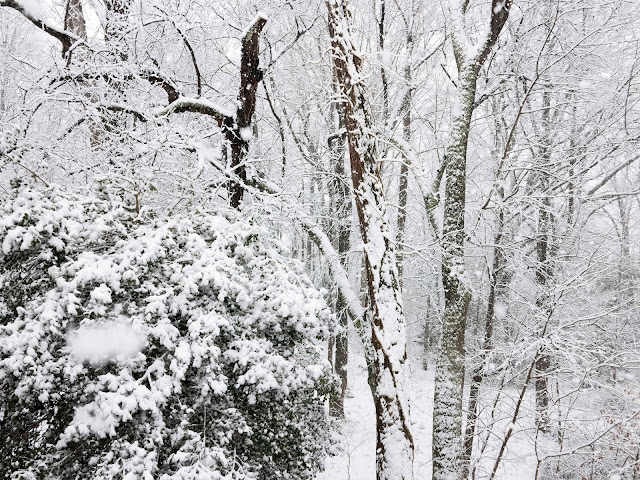 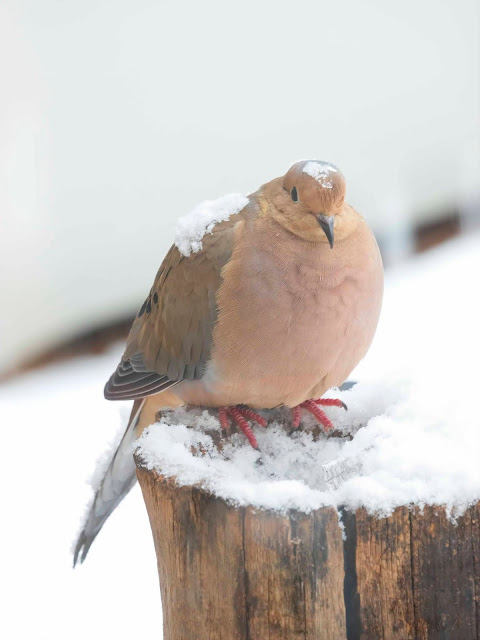 Even the birds were dressed in snow!
I looked out the kitchen window and it looked as though a fox had visited recently! 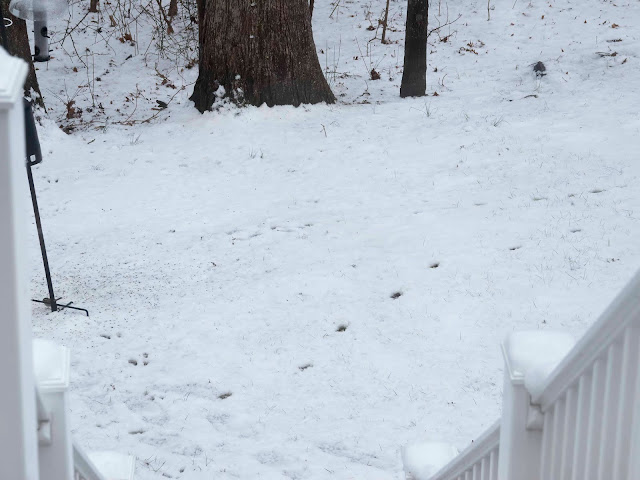 I grabbed my coat and scarf and put on snow boots.  I also got a plastic sleeve to cover the camera and see if I could find that crazy fox, as I had stumbled on the pair a few years ago after a snowfall. 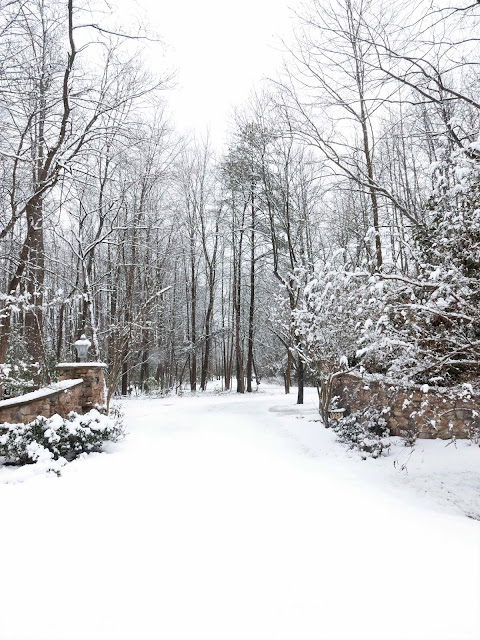 I was early enough that most of my neighbors still have unblemished driveways.
The street itself bore different markings. 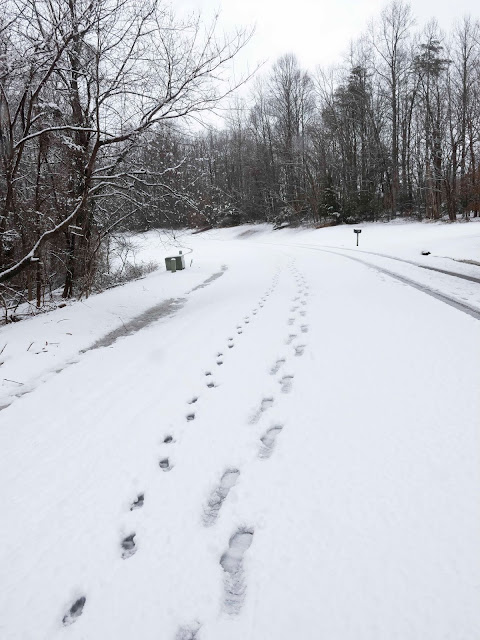 A man outside the neighborhood with a large dog walks down our rural street.  I must have missed him by an hour or so!
It was a lovely if brief walk in the cold, and for those of you who are sitting outside under a palm tree or shopping in a busy city, I hope that this was a bit of change.  For those who are under snow, I hope this was not too boring.
Posted by Tabor at 12:23 PM 11 comments: