Guess who visited a botanical hothouse while waiting for grandchildren to get out of school? 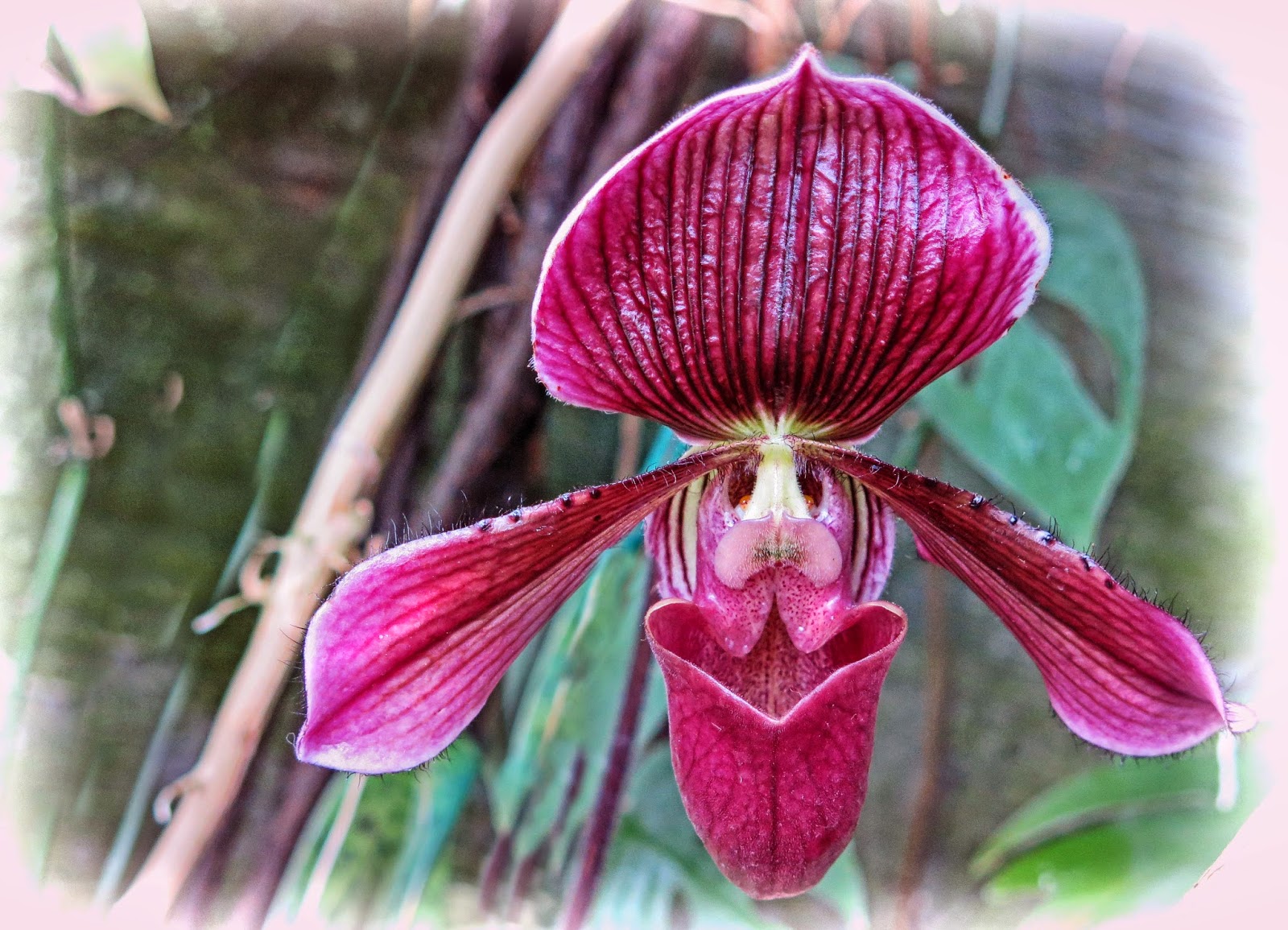 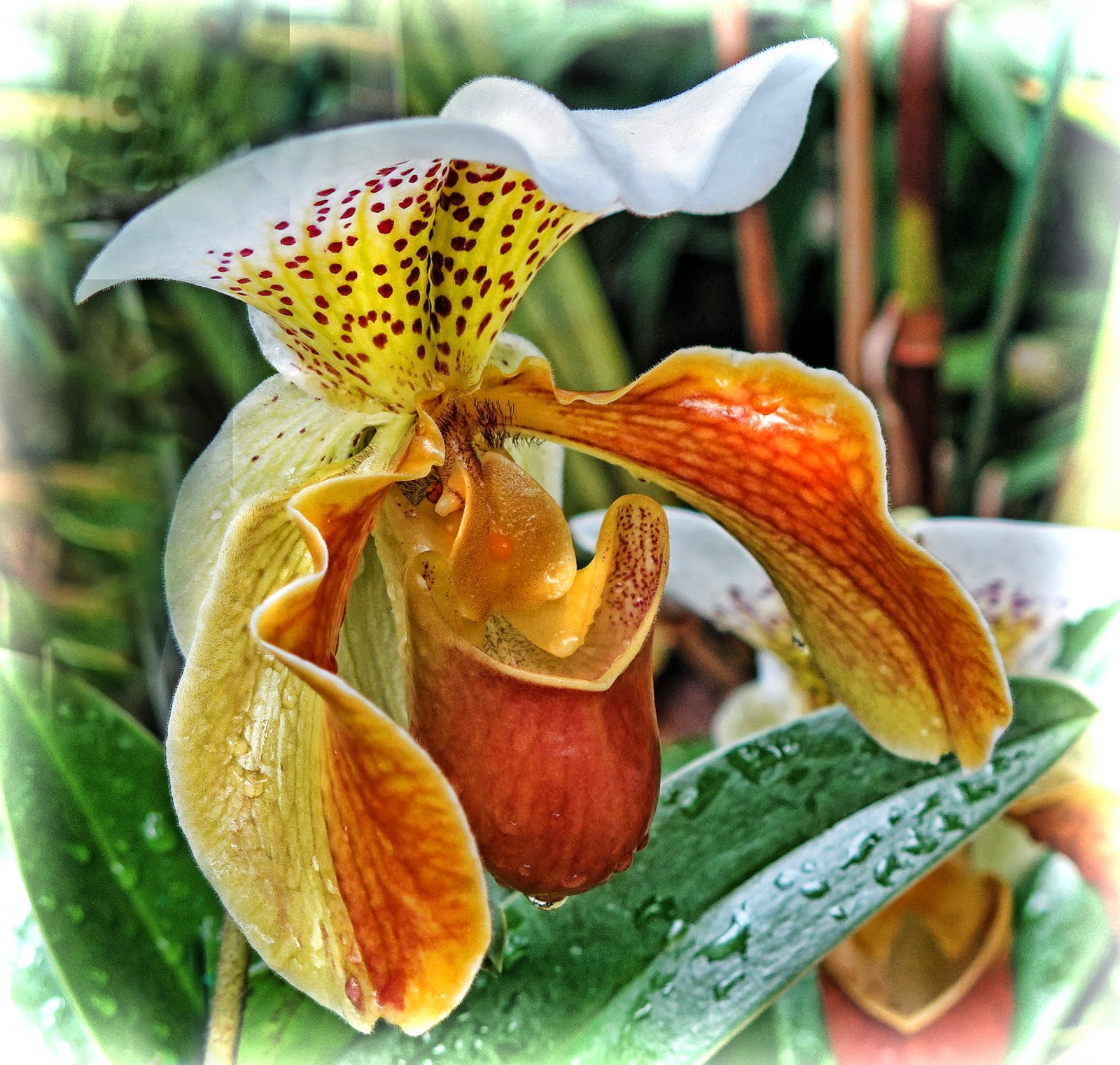 I once tried to grow orchids, but failed on the misting and moisture I am guessing, because they dried up like raisins. It was 40F outside and nice and cozy inside at the Washington, DC botanical conservatory.
Posted by Tabor at 5:44 AM 3 comments:

Just a Tease of What is to Come

Our weather here has been a tease.  Tiny little purple crocus shyly thrust their heads through grass that is still a winter gray green.  The daffodils are blooming here in the city where I have come to spend the week.  Witch hazel has spread its spidery fingers along the branches of the tree arms.  Yet in spite of the timid and tiny yellows and lavenders, the weather is still cold and the skies mostly gray.  When the sun does shine, the weather is just warm enough you can loosen your neck scarf but not take off your coat.

Tomorrow is supposed to be our first real spring day, maybe even warm enough to pretend it is the first day of summer.  But I am not going to put away the heavier sweaters just yet as early April can still be a disappointment with cold rains.

I have been walking grandchildren to school each morning and then picking them up each afternoon and treasuring this golden time that I thought had left my life when my children were grown.  They noticed the crocus and I point out the robins and blackbirds and we can smell spring on the air.  WE both enjoy anticipating what we know lies ahead.

It Is New to Me

Those of us who are birdwatchers love being able to see a species that is new to us and to add it to our list.  It is a bit of an addiction and some bird watchers keep much better track of their numbers and may even use them to brag a bit.  Since some success is dependent on free time, money to travel and other things, I do not keep track of total numbers.  But I was able to see a bird that I had never seen before.  It took us an entire day of wandering on trails in the scrub brush of Florida.  I also saw a gopher tortoise which is somewhat rare and which I had never seen.  All I got was his butt heading back down the minute he saw me! 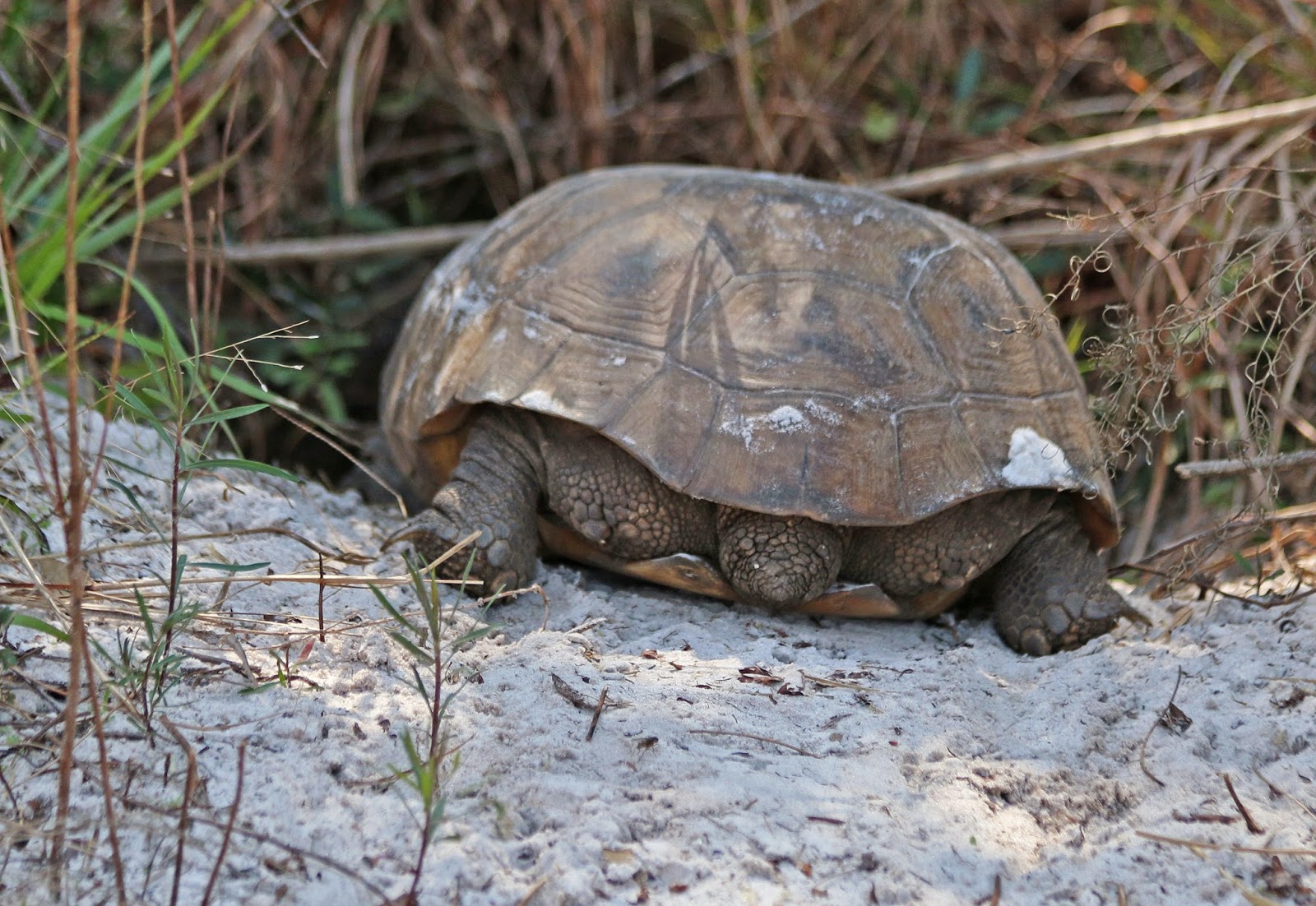 Please note that this tortoise was over a foot in width!  I do not know if it was male or female (male shells are more concave), perhaps some reptile reader can tell from this rear view, but I do know they can make underground tunnels 40 feet long!  This digging provides shelter for over 300 other animals types and thus this turtle is considered a "keystone species."  In Florida they are also categorized as a Threatened Species, certainly due to loss of habitat as Florida continues to pave paradise to make a parking lot.

BUT, I digress because I also saw on this trip my first scrub jay--Aphelocoma coerulescens.  As I wrote earlier this took a lot of walking around and listening for jay calls and just hanging out in the rather boring brush.  Glad it was a cool day.

The first one I saw was sitting high in a tree near the trail as the sun was going down. 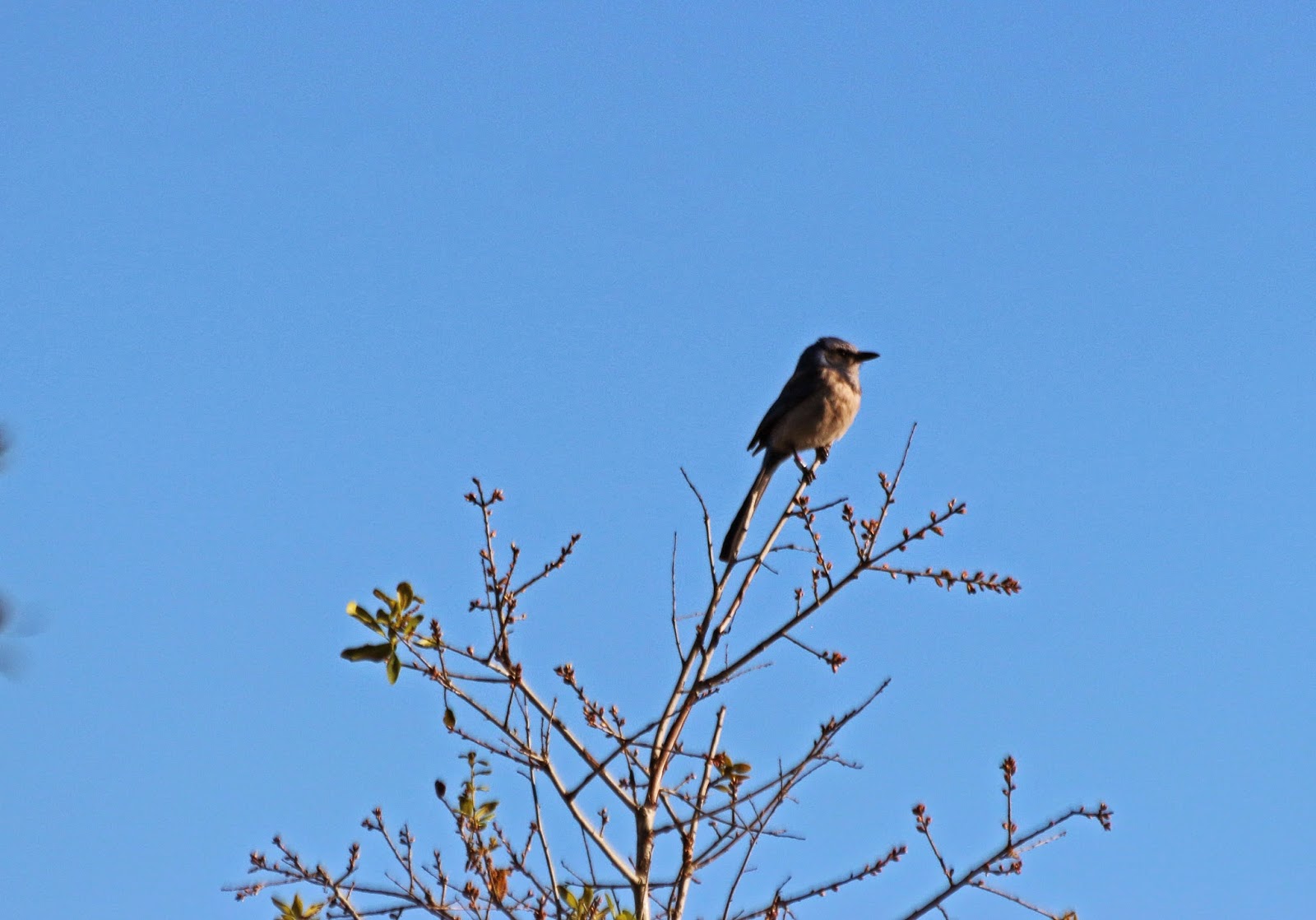 The nice thing about jays is that they are somewhat curious, sometimes beggars, and therefore, not intimidated by man as you sneak in closer.  It is illegal but they can become hand fed.  I think this above was the male on the watch post.  He has different calls for snake(!), hawk(!), etc. 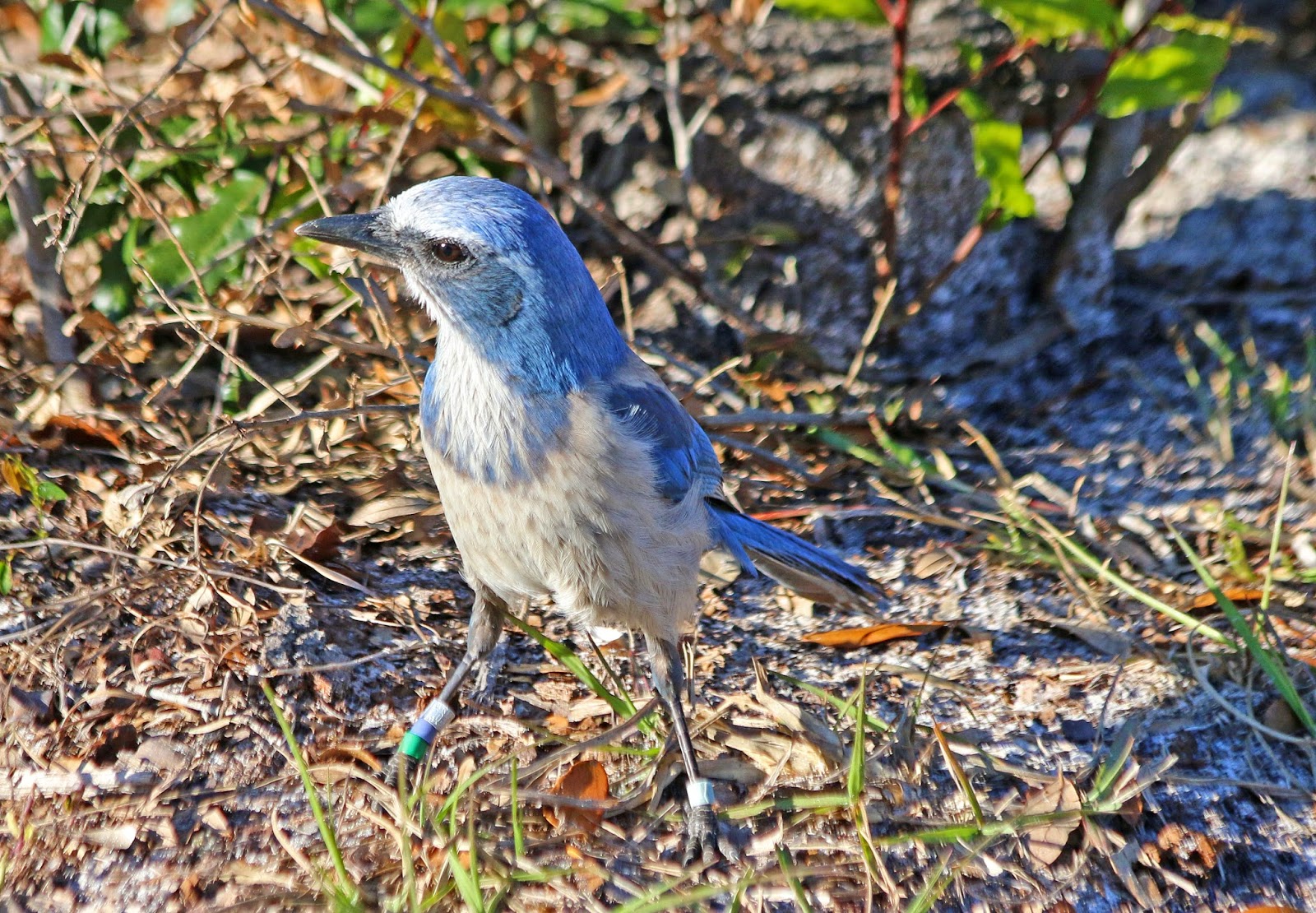 You will notice in the photo above that he/she has not one, not two, but three bands on the legs.  Their habitat of rare oak scrub is being taken each and every day.  This natural habitat must also face a regular burning for survival of their food.   Like the tortoise it is also a Threatened species.

Below the jay is eating some of those precious oak seeds. 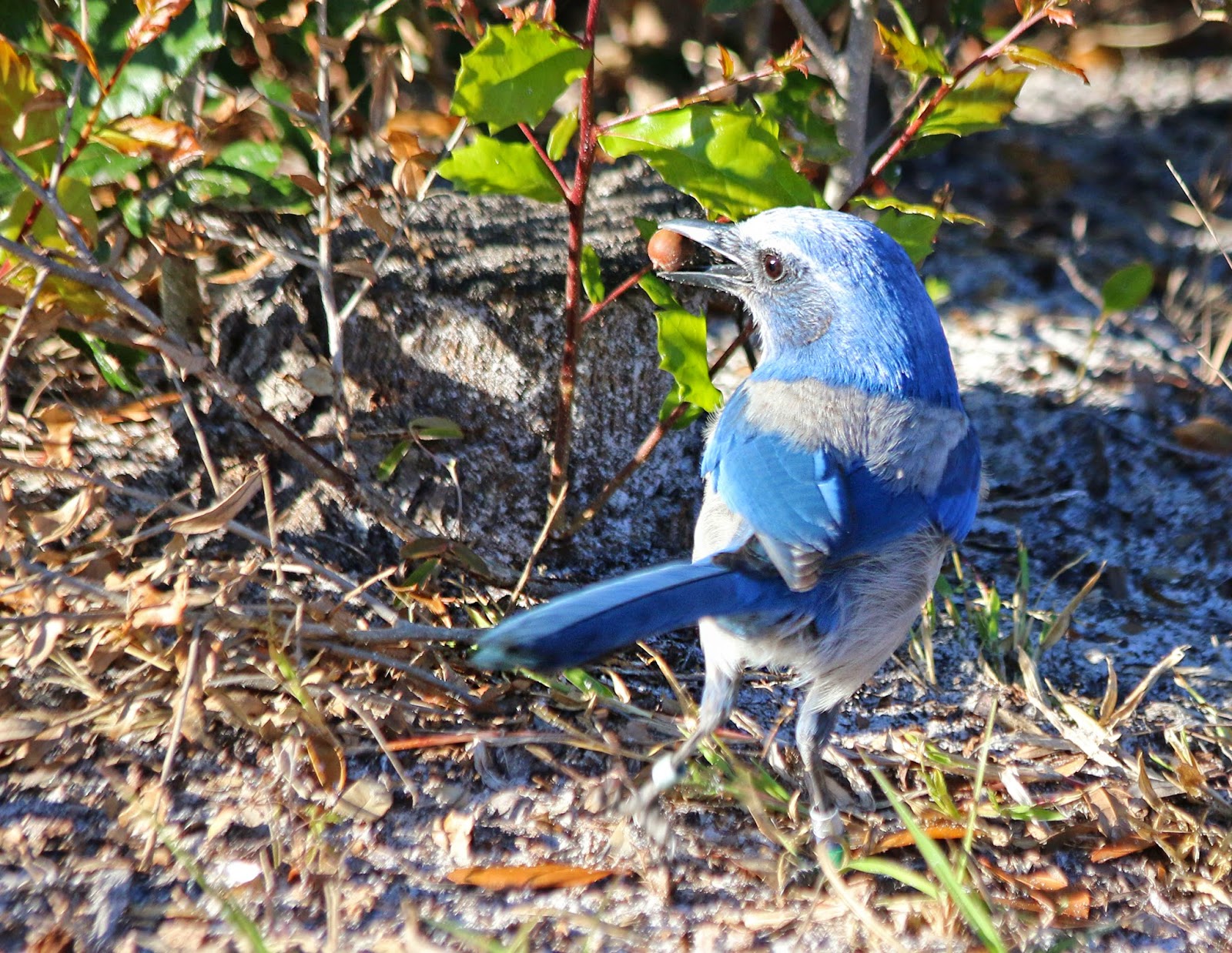 Next time you are in Florida scrub oak, keep your eyes pealed.

Flowers to Make Me Sneeze

At the time of the writing of this post I have a "toad" in my "dnose" and a tickle in my throat.  Achoo!  So I leave you with some "purdy" flowers that I saw in Florida weeks ago when I could actually enjoy a fragrance. 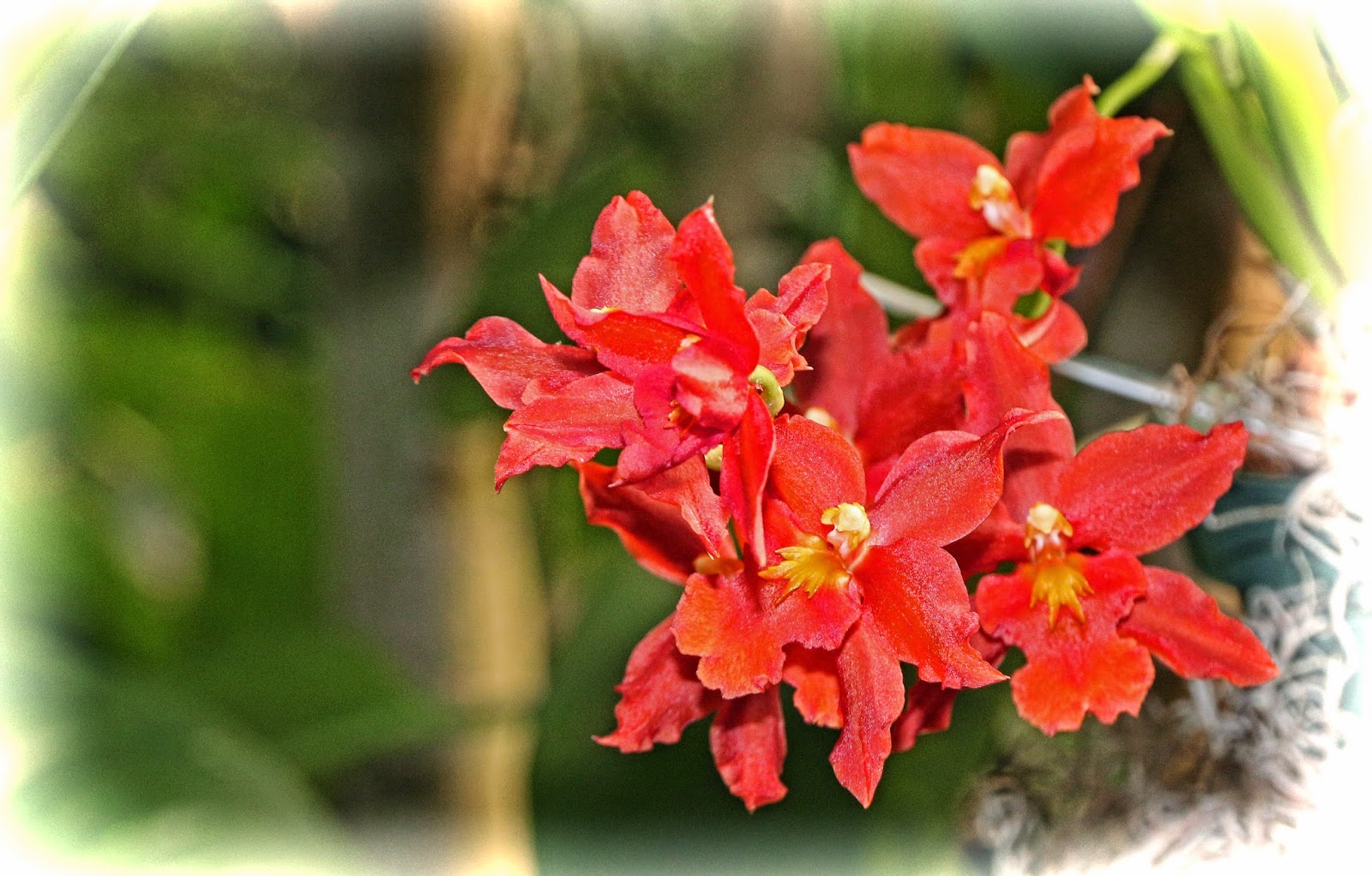 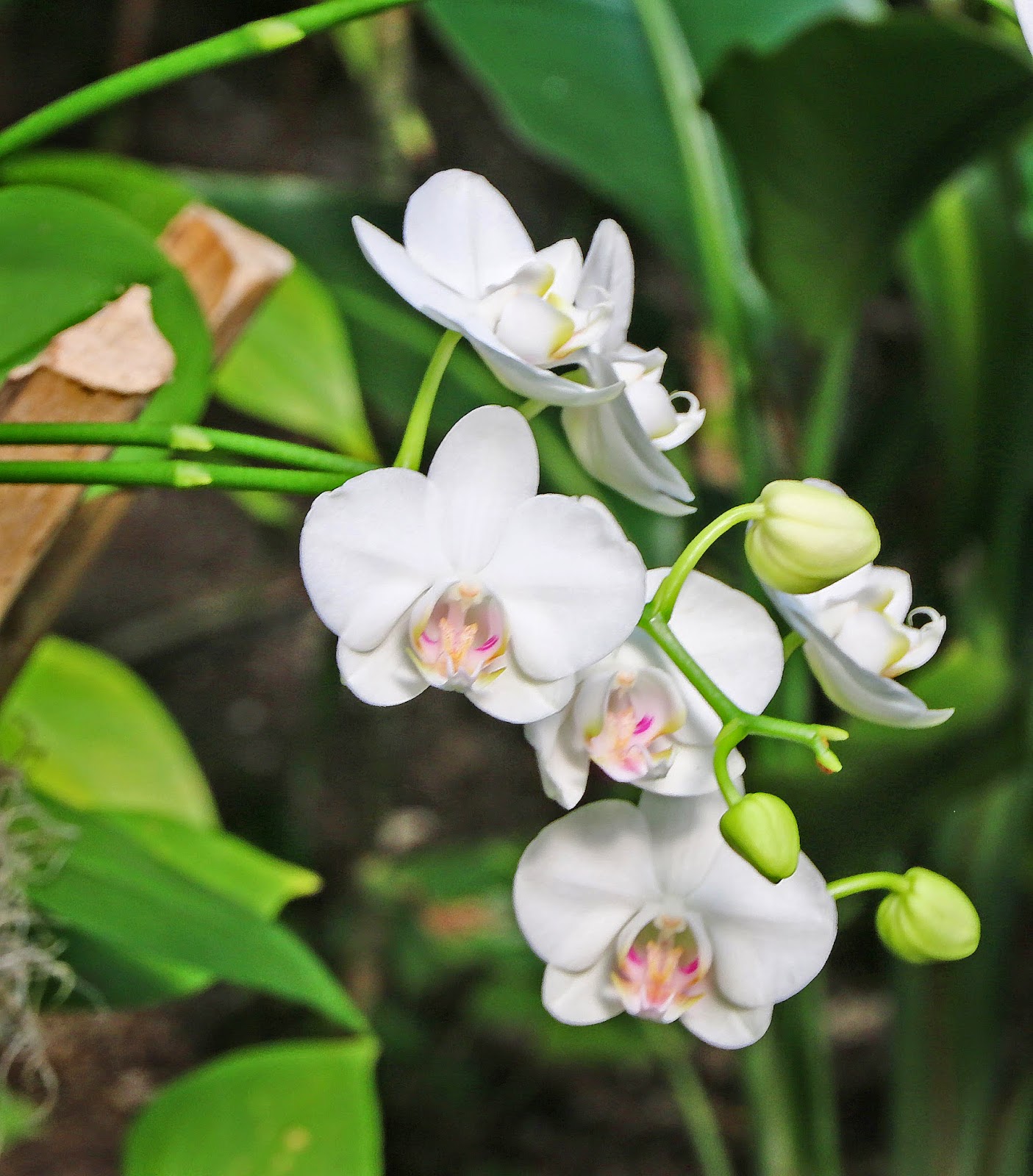 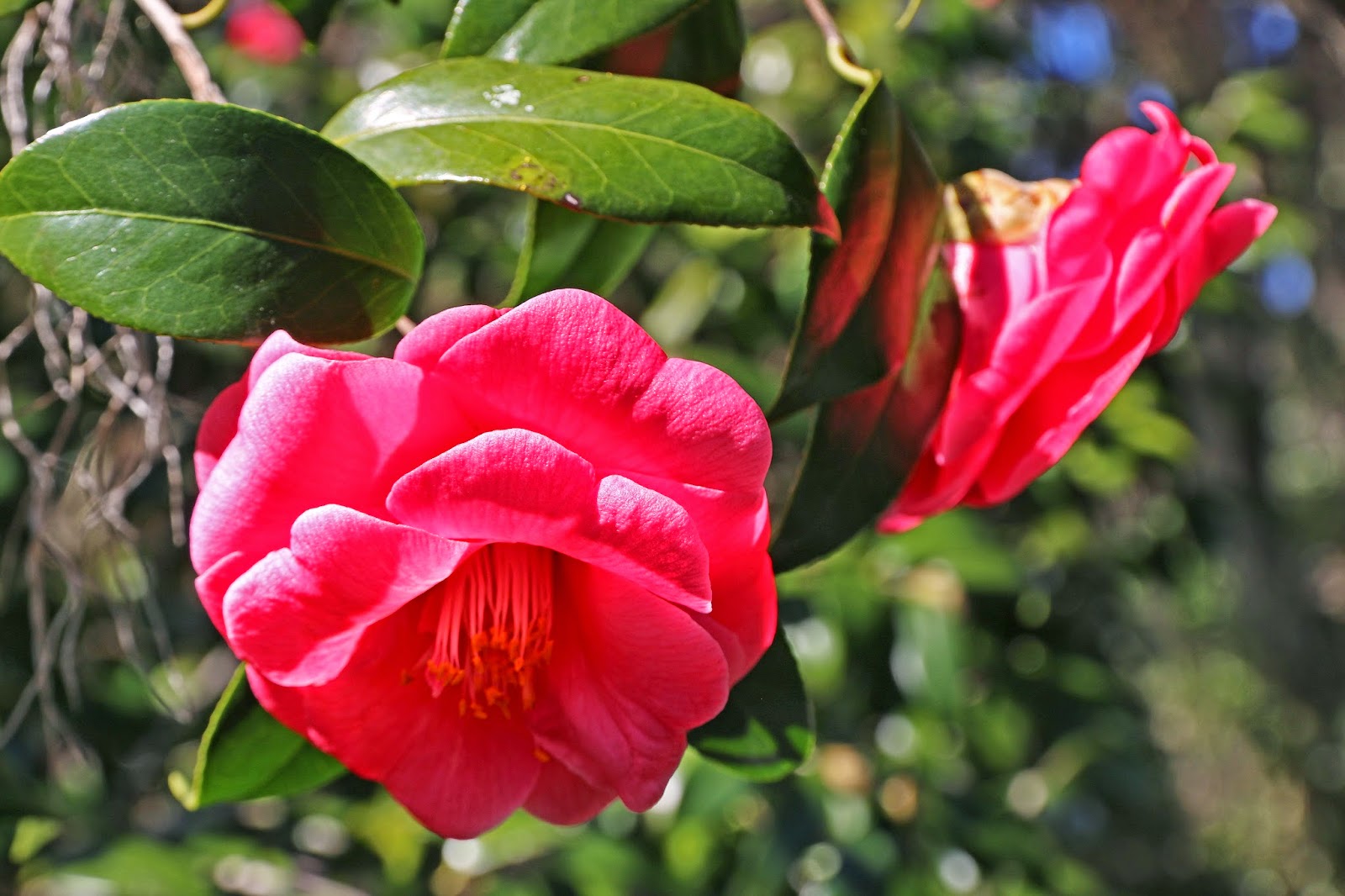 Orchids and camellias, who could ask for anything more? 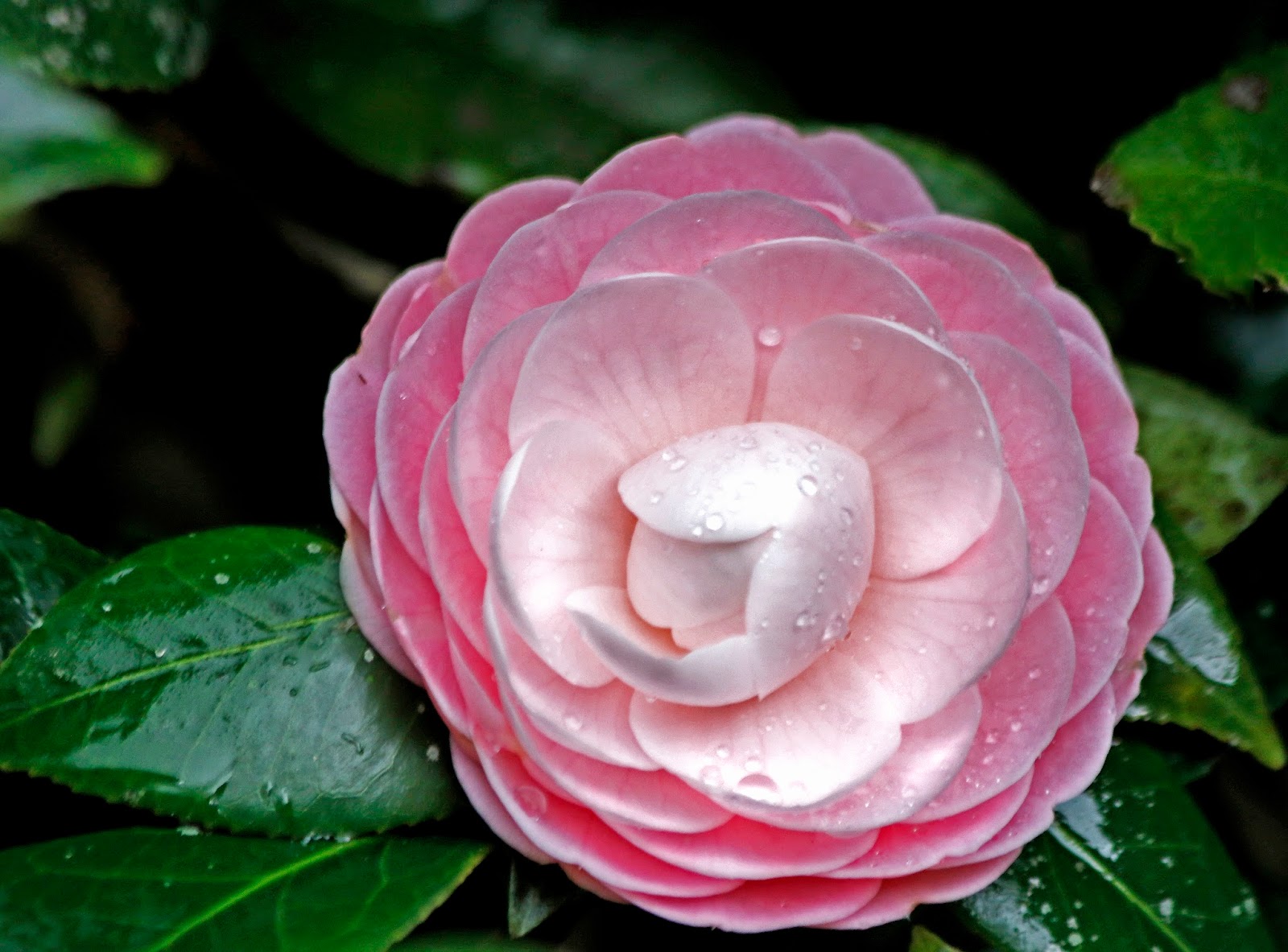 This last was taken at my friend's house in Florida.  She is undergoing therapy for breast cancer and I hope her blooming camellias keep her spirits up!

I looked out the window the other day and saw that the grass was turning green!  Daffodils are about 4 inches above the ground.  All of the snow is melted and the ground seems only damp and not totally soggy.  I actually am eager to hurry outside to catch one of those memorable sunsets in the evenings and the sun is setting later, so we have usually finished dinner.

Come along with me and make sure you still have a heavy jacket, because 49F degrees is still a little nippy.

Here are four different sunsets this week.  In the last two you can see the ice that is still on the river, but soon to be gone! 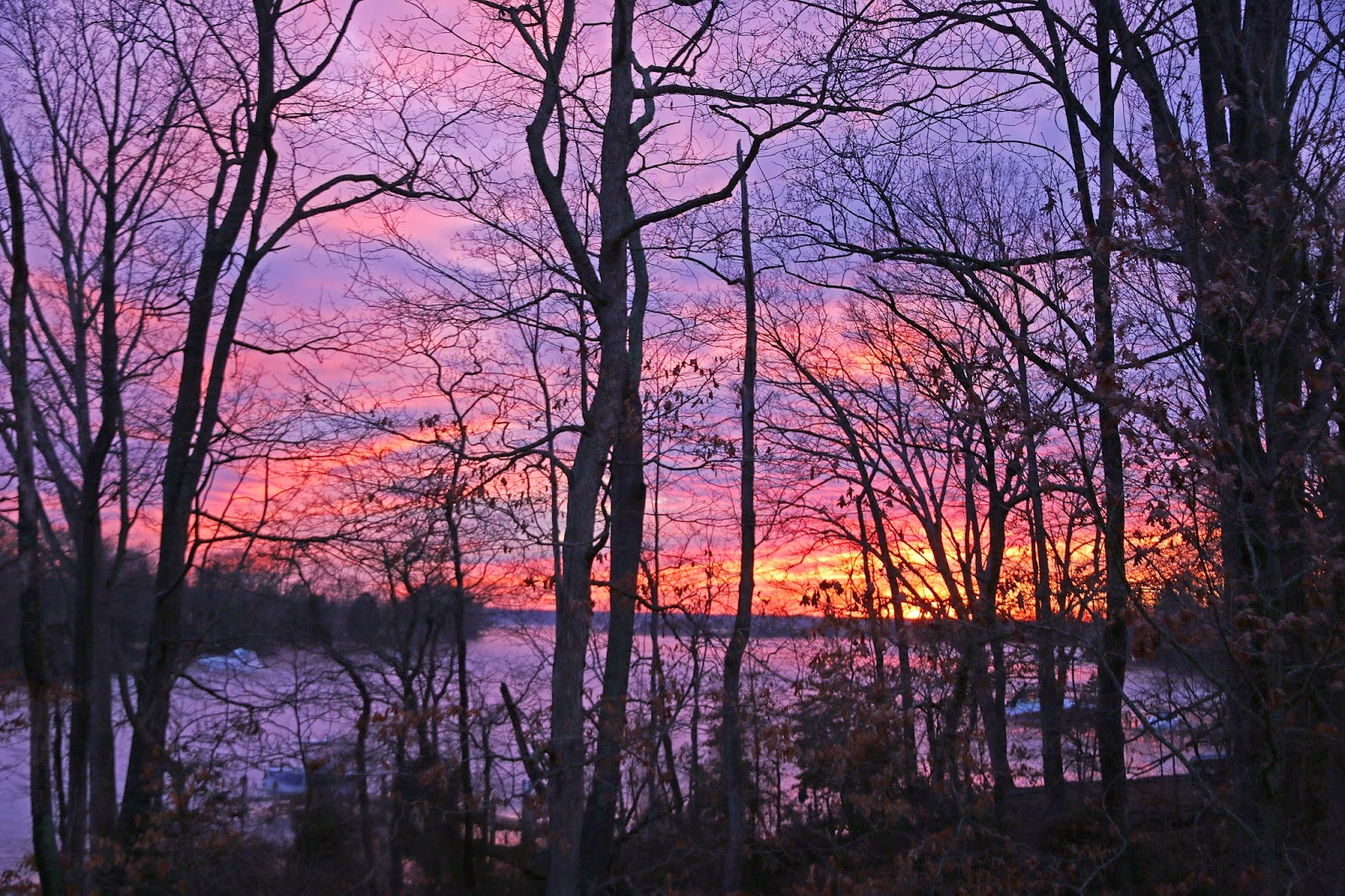 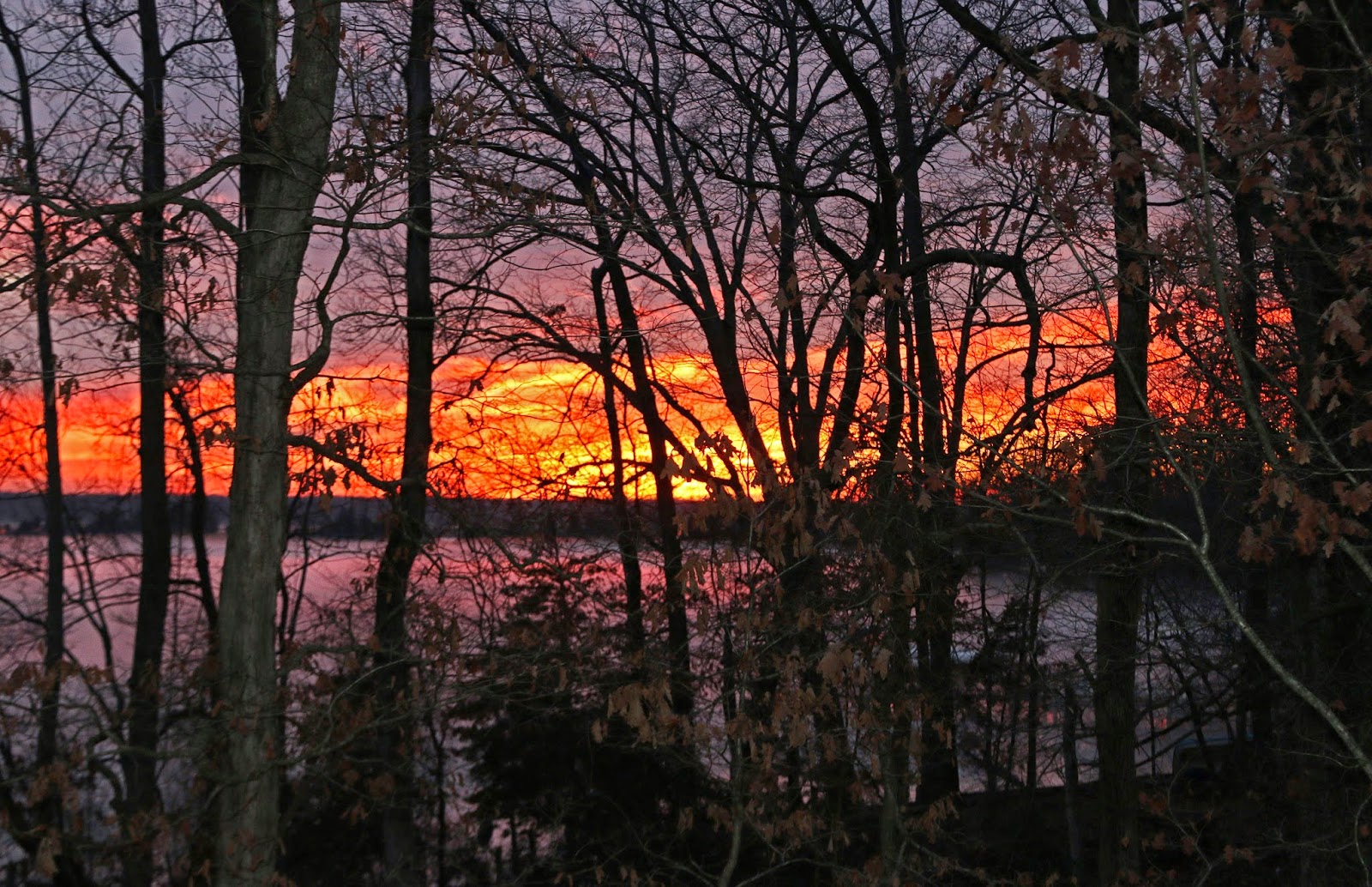 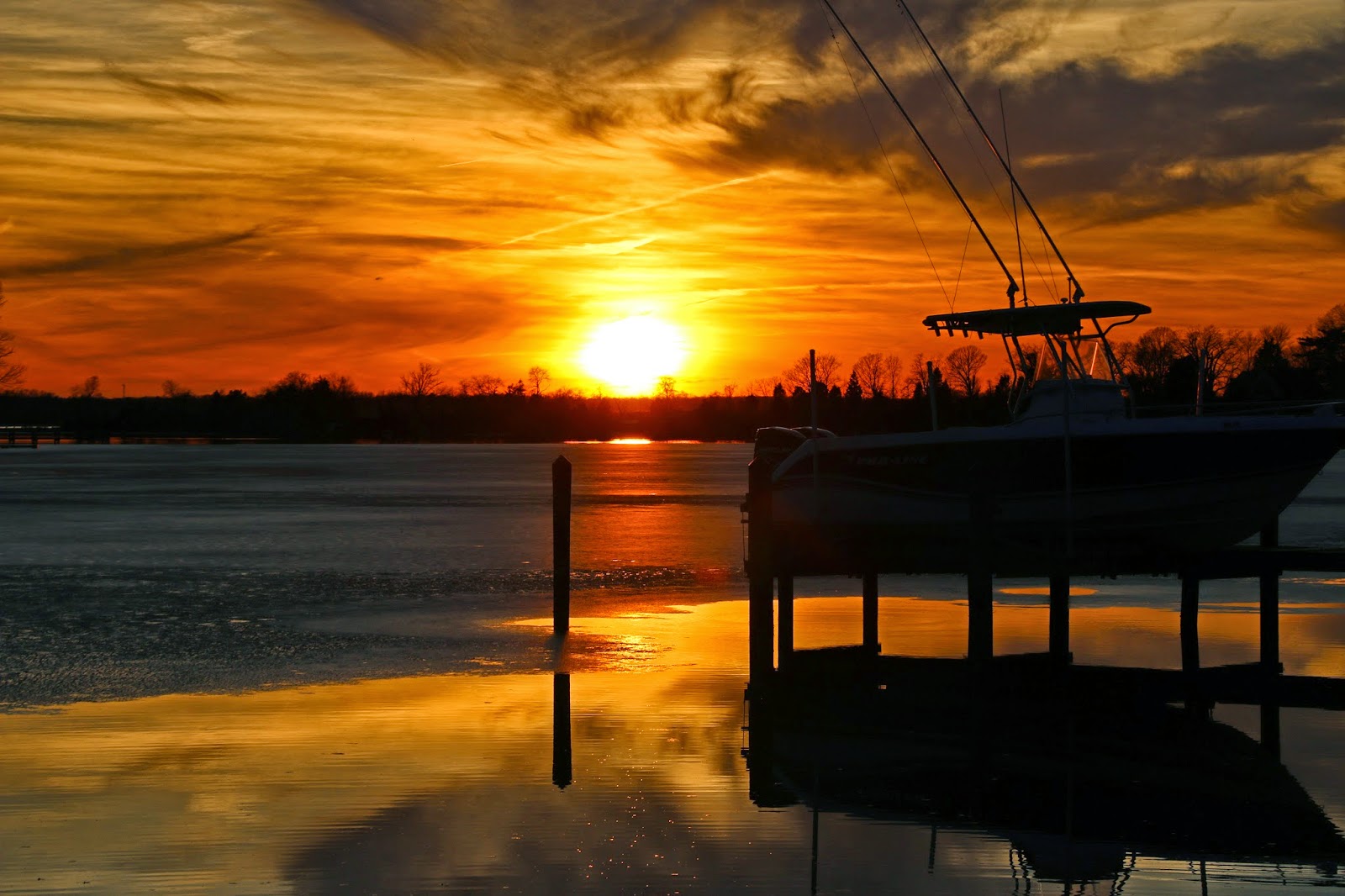 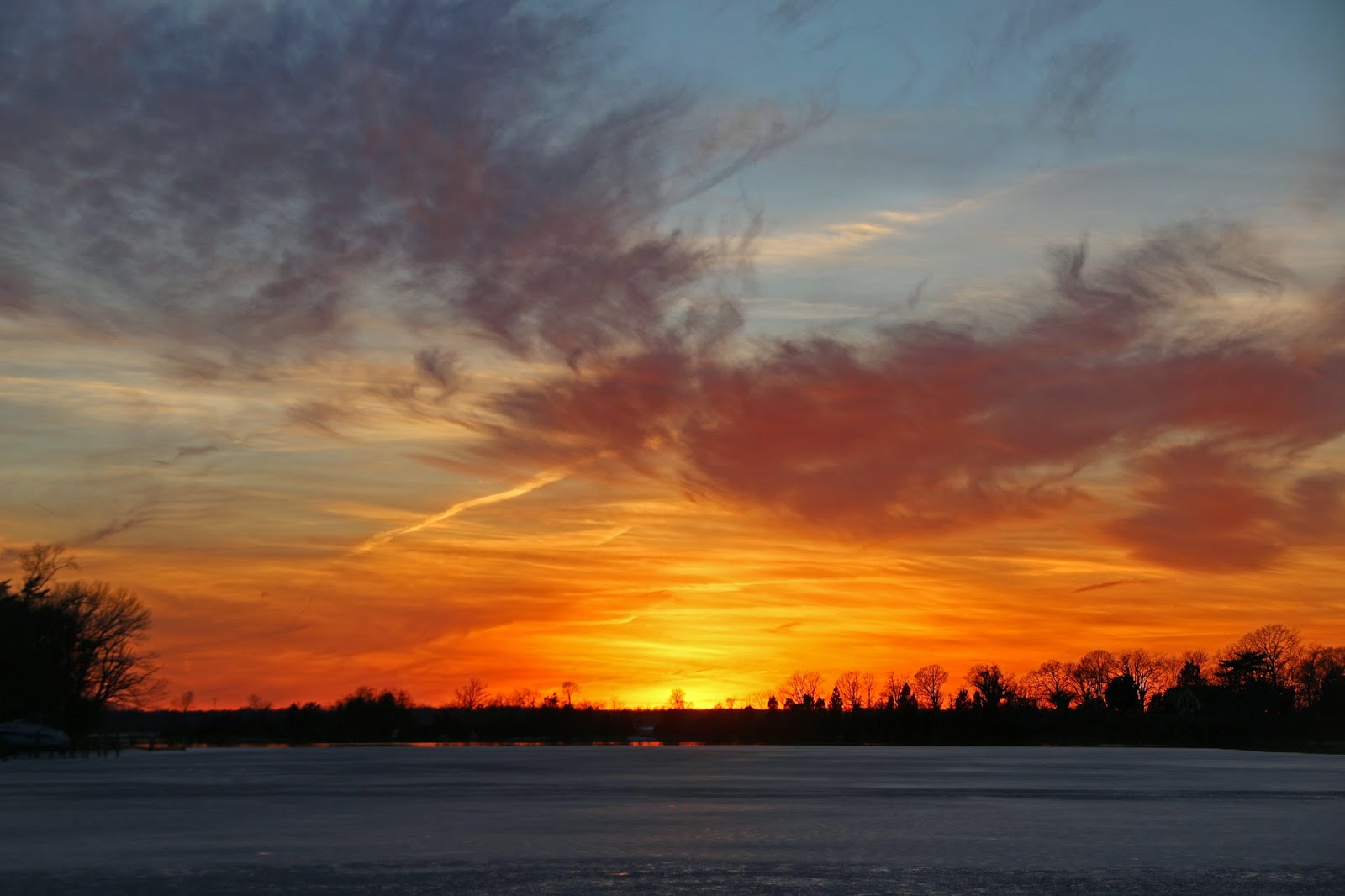 Lots of birds winter over in this  North Carolina refuge area, but without a tripod and fearing disturbing them, I only got a short afternoon's worth of photos of most of the birds.

Below is the gang all together.  There were many pods of birds like this all over the refuge.

Most of these water birds were shy.  I never did get a decent shot of the coots without them paddling like madmen/women to a far shore!  You can tell by that bird in the lower left, I am not welcome. 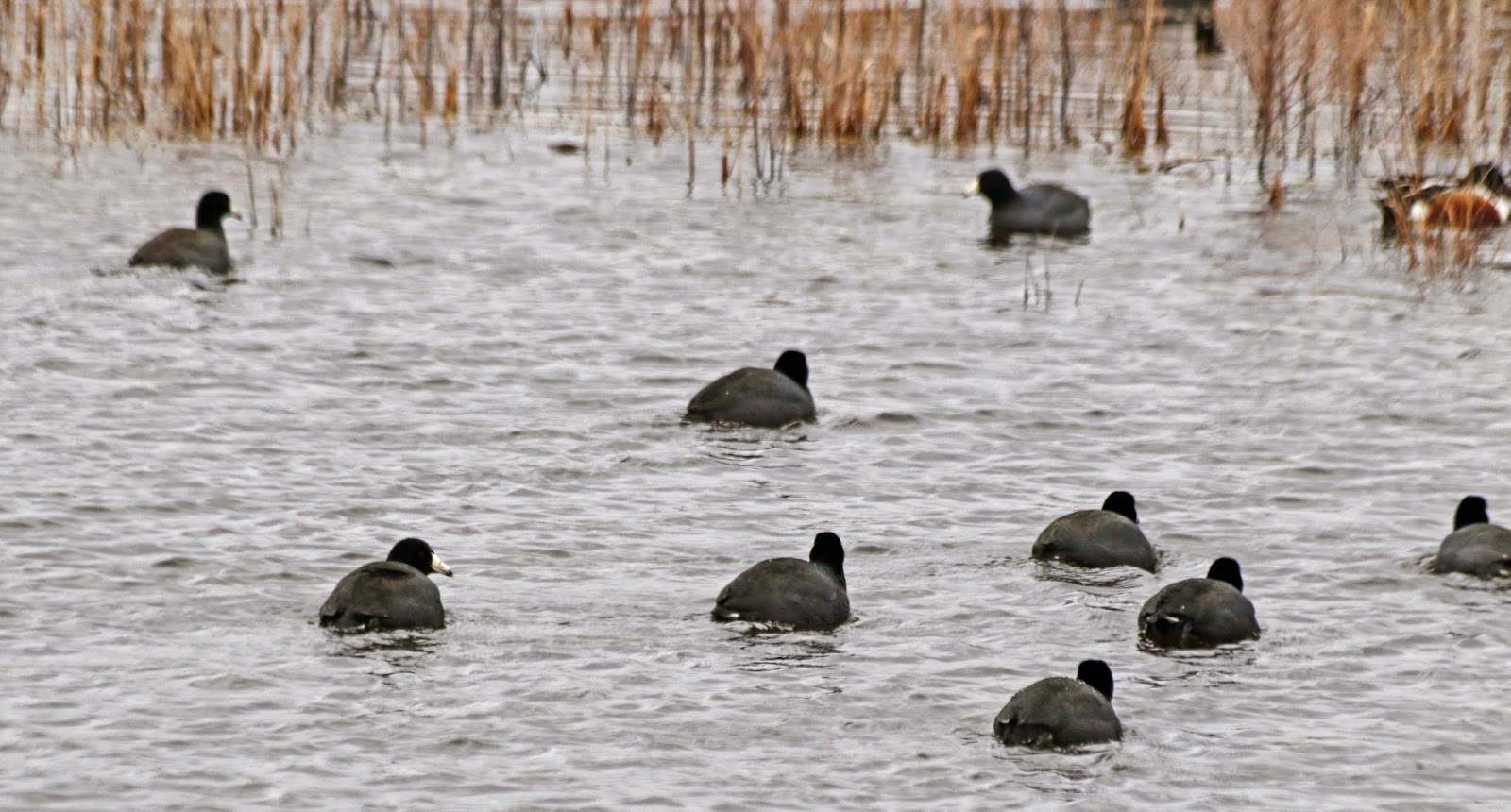 I tried to get some photos of these shovel bills, since I do not have any of this duck, but they were also shy and rarely had their head above water and this photo does not do justice to their colors!  Actually they are probably packing on the carbs for the long trip ahead. Finally, I did get one shot of pintails with the male showing that lovely blue bill and you can see why they are named pintails. 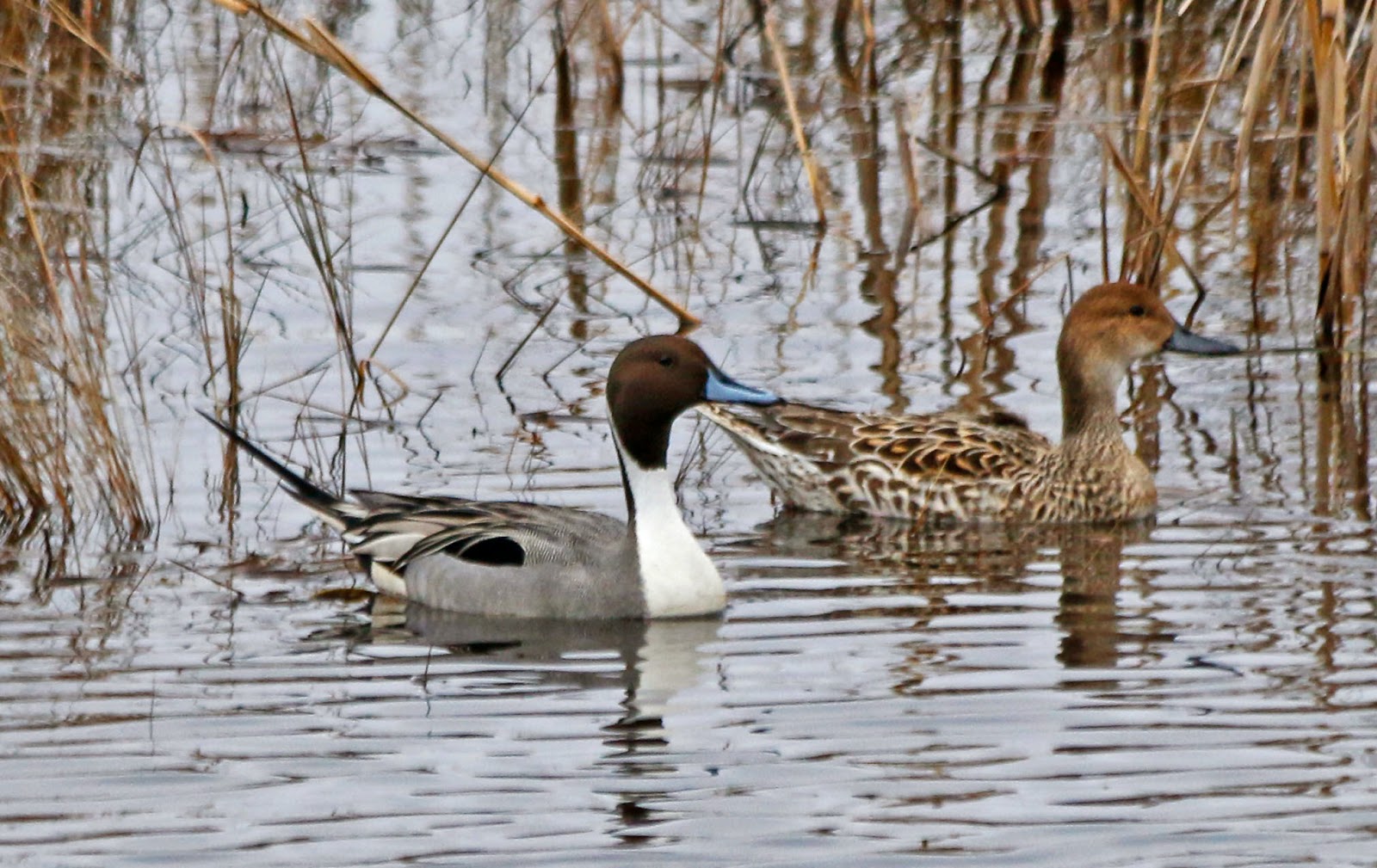 Precious White Elegance and It Is NOT Snow

Years ago, before Hurricane Agnes came ripping through this area, I was told that one could see dozens (maybe more even) of swans on this river of 'mine'.  They came in during the late winter to wait for warmer weather north and ate grasses that grew along the shallow river's edge.  Hurricane Agnes pushed salt water deep into shallows for days and all the grasses died that year.  Sadly, they never made it back.  Then the Dept of Natural Resources, in their infinite wisdom thinking that they can control the planet, spent a few springtimes addeling the eggs and destroying the nests of the few non-indigenous swans (mute swans) that moved in.  So, I have a dearth of swans in my land.  Therefore we went to the Mattamuskeet National Wildlife Refuge on this trip south and managed to see the hundreds of swans gathering before their flight north.  We had missed their departure by days, so felt very blessed that cold weather had held them here.  (Many of the photos are poor because I was determined not to try to get too close and disturb their rest!  Those of you who cannot make this trip with me, and who perhaps will never visit this area in the cold of early spring, will enjoy those blurry photos, I know.  The last photo I made into a painting since the clarity was poor.)  These are tundra swans and they set up housekeeping in the far north of Canada where they nest and lay three to five eggs each year.  Those that are still too young to mate hang out together in various areas in Canada.  They nest on the grassy ground and are subject to all sorts of predators, so they are precious to see.  Our Canadian friends are probably familiar with them, but for us in the mid-Atlantic they are brief exotic visitors that come by without a castle or princess in the background.  Note the yellow patch on the middle swan in the last photo showing his link to the Bewick's swan in Europe. 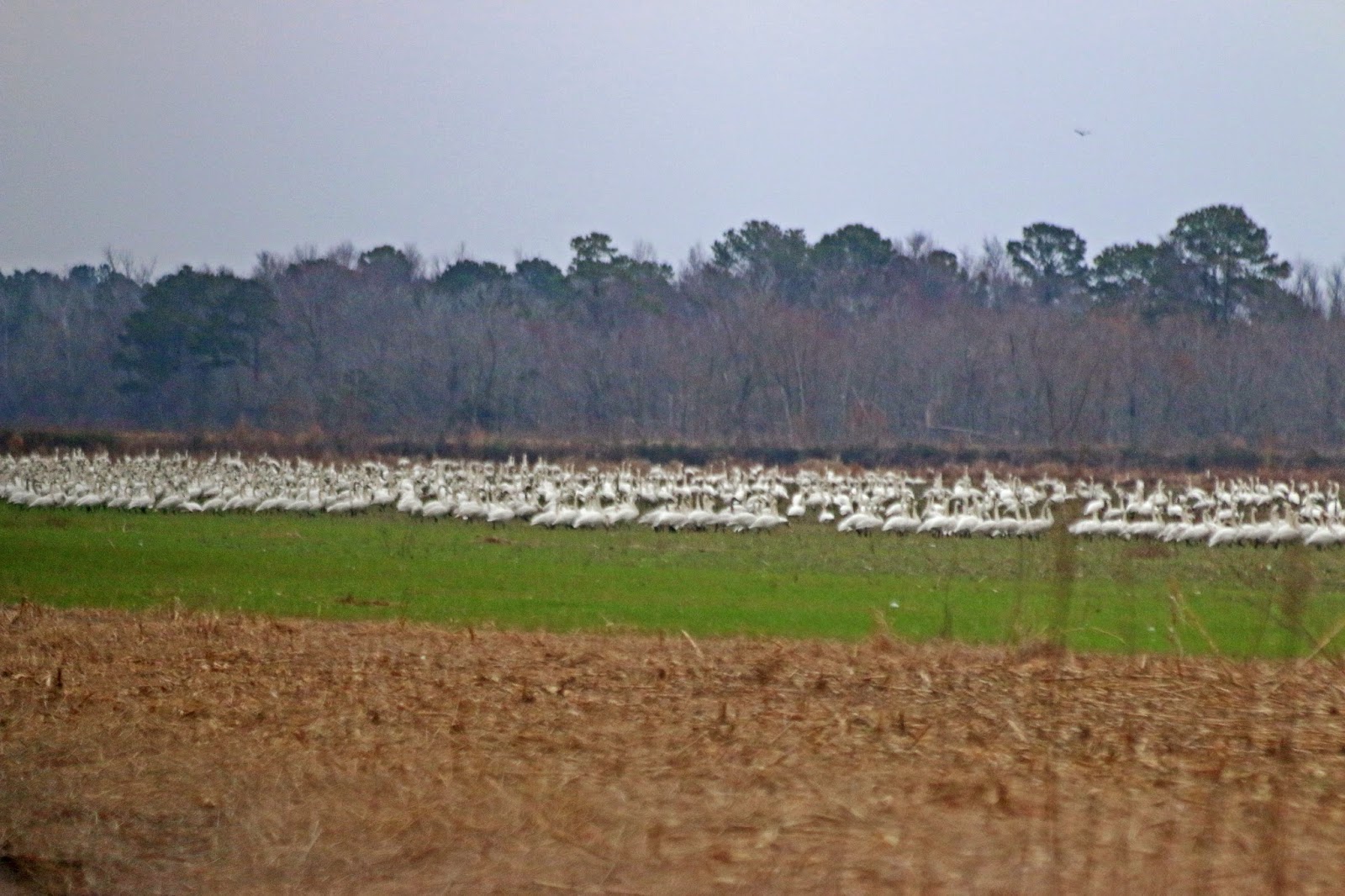 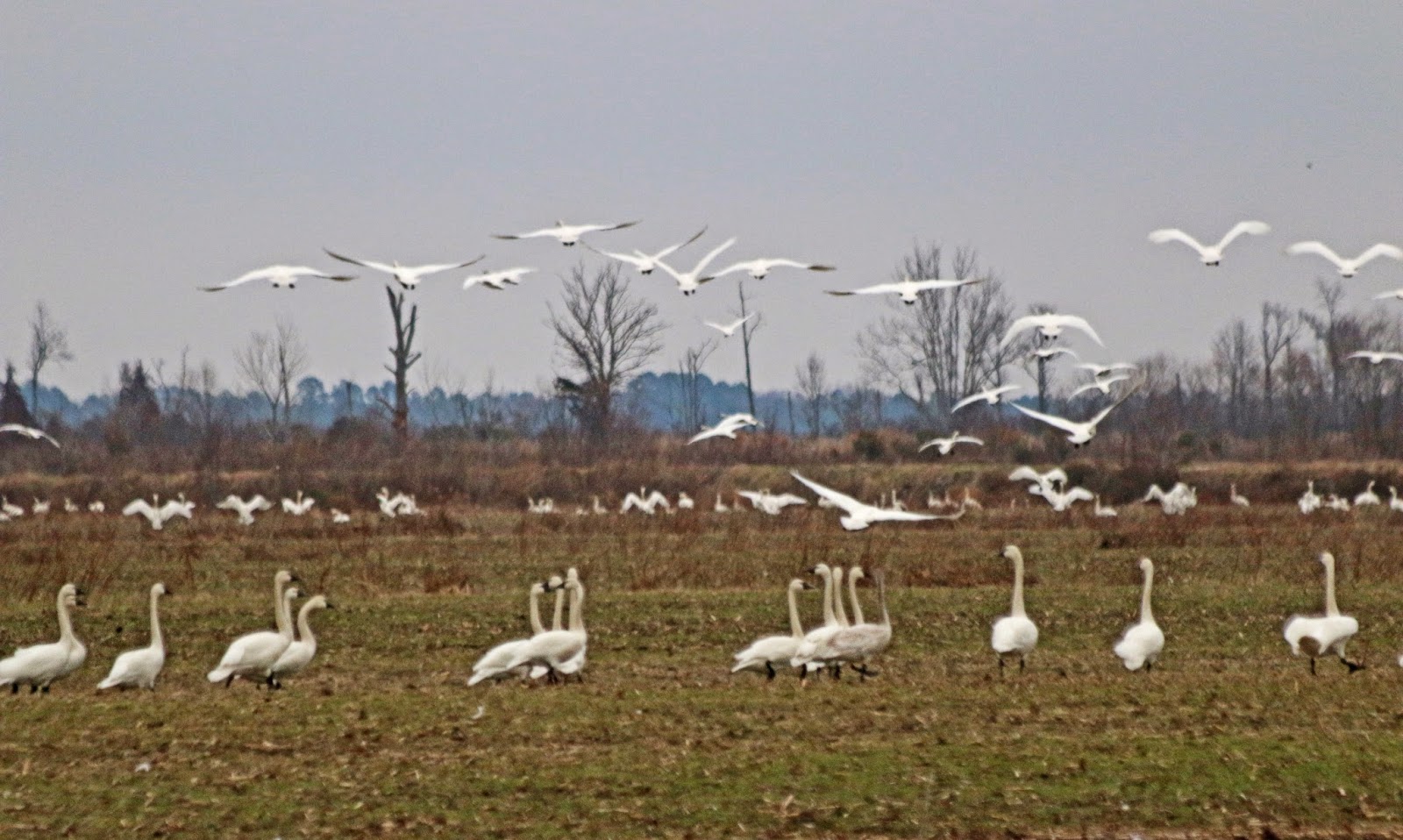 With so many swans it was not surprising to see that at least one had met his demise.  Perhaps a fox, a strong Eagle, even a coyote that now roams this area. 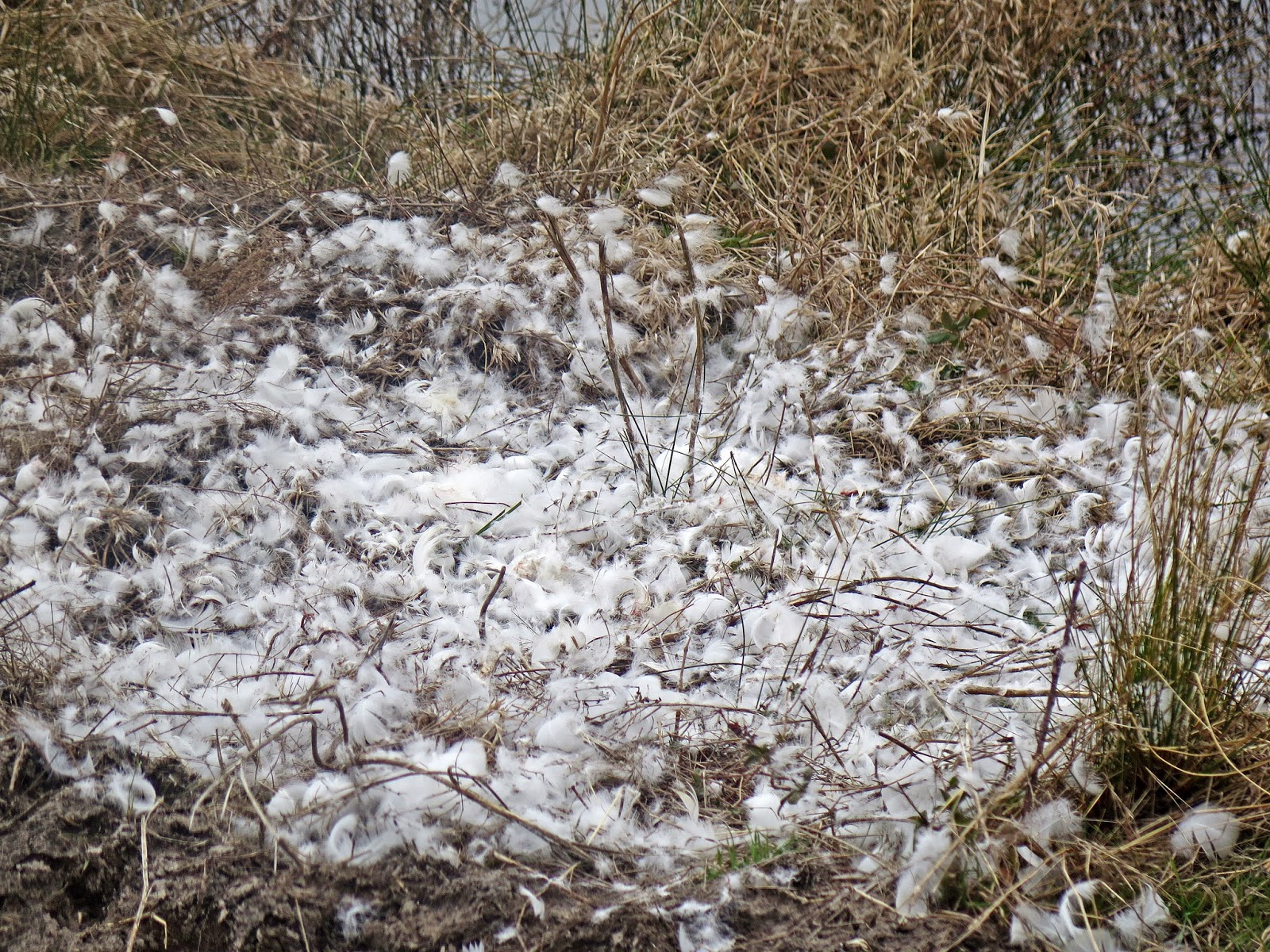 But to leave you with a better vision: 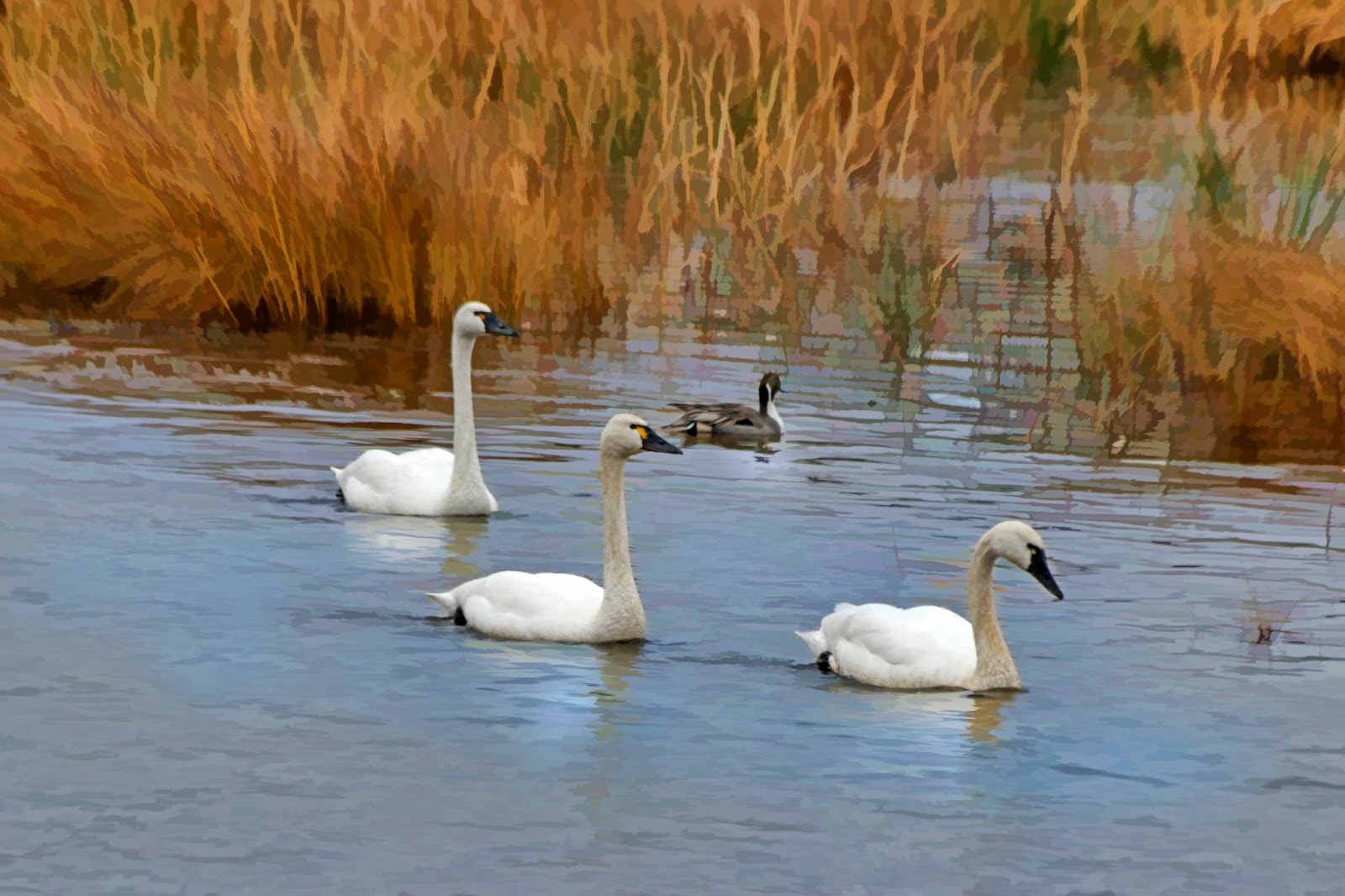 The graph below was taken from the Cornell University site and shows their migratory paths.

It was a cold morning.  Somehow, something, somewhere called to me.  I put on my camo and got my shooter and headed outside to see what was going down.  The sun was still behind the horizon shooting cold rays against the cloudy and threatening sky.  My first steps resounded like cannon fire as I punched through ice covered snow sinking to my ankles in the white stuff and marking the perfection of the yard with scars.  I was an uninvited giant to this reception.  The make-up crew had already come and gone.

The red-head had been gel-packed with all her curls.  Someone sprinkled glitter on her head just for the joy of it. 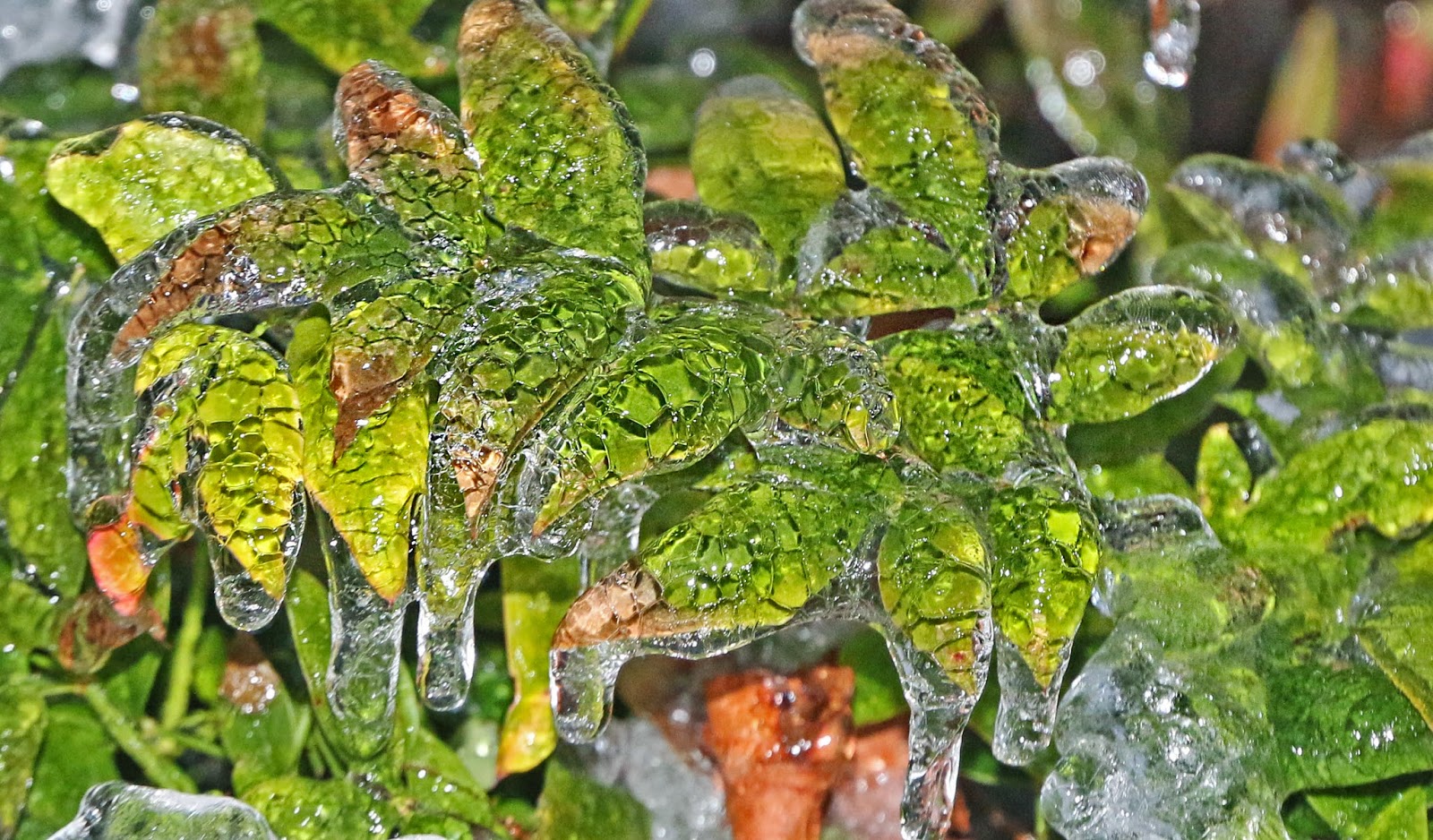 The Nandina had held his green color this long winter and decided to wear a slick alligator zoot suit over it to the reception.  He look a little over the top with all the gilding. 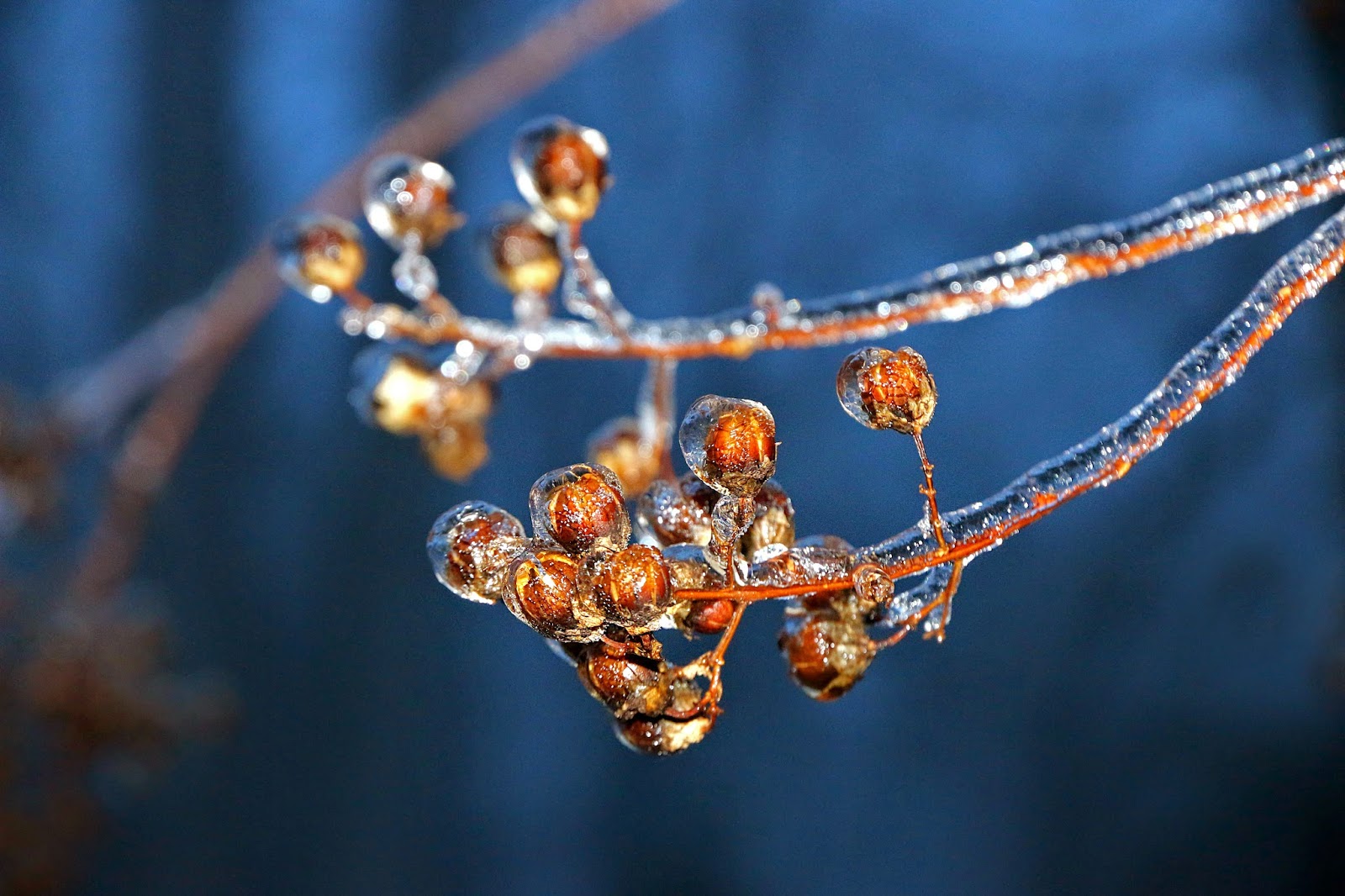 There was lots of bling in the way of swing in the way that diamond-like necklaces add their sparkle, and almost everyone wore some jewelry to dance in the winter wind. 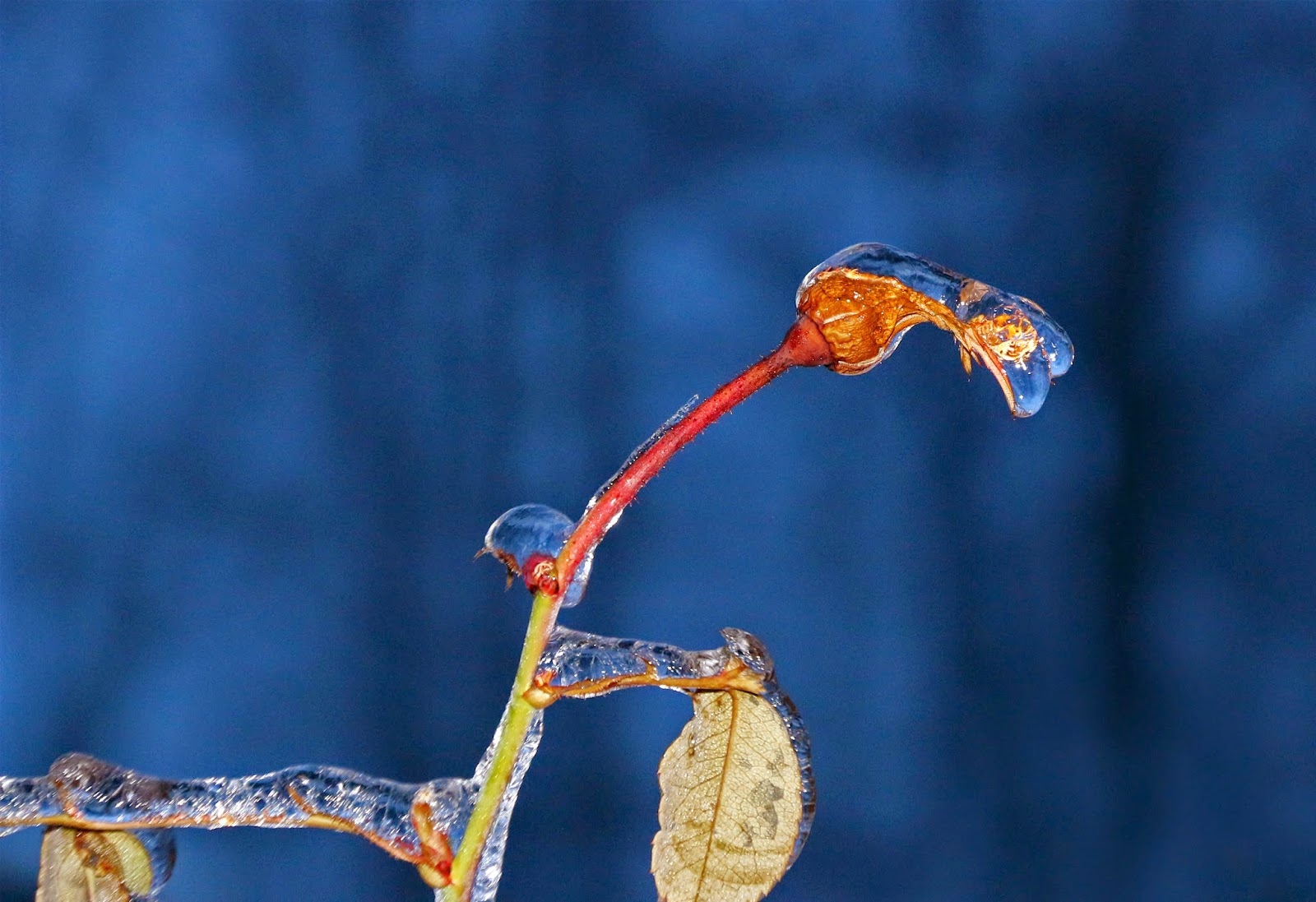 Even last year's rose hips leaned in to the beat of the Winter Ball tossing a ponytail ice mop around to show they were not too small or tender to go unnoticed or too brittle to get down to the beat.

One last ball before winter moves on to the south of the planet.  He does not always throw around such gems and glitter in his celebrations, but this time we sort of needed that.
Posted by Tabor at 9:00 AM 8 comments:

How can something so cold look so warm? 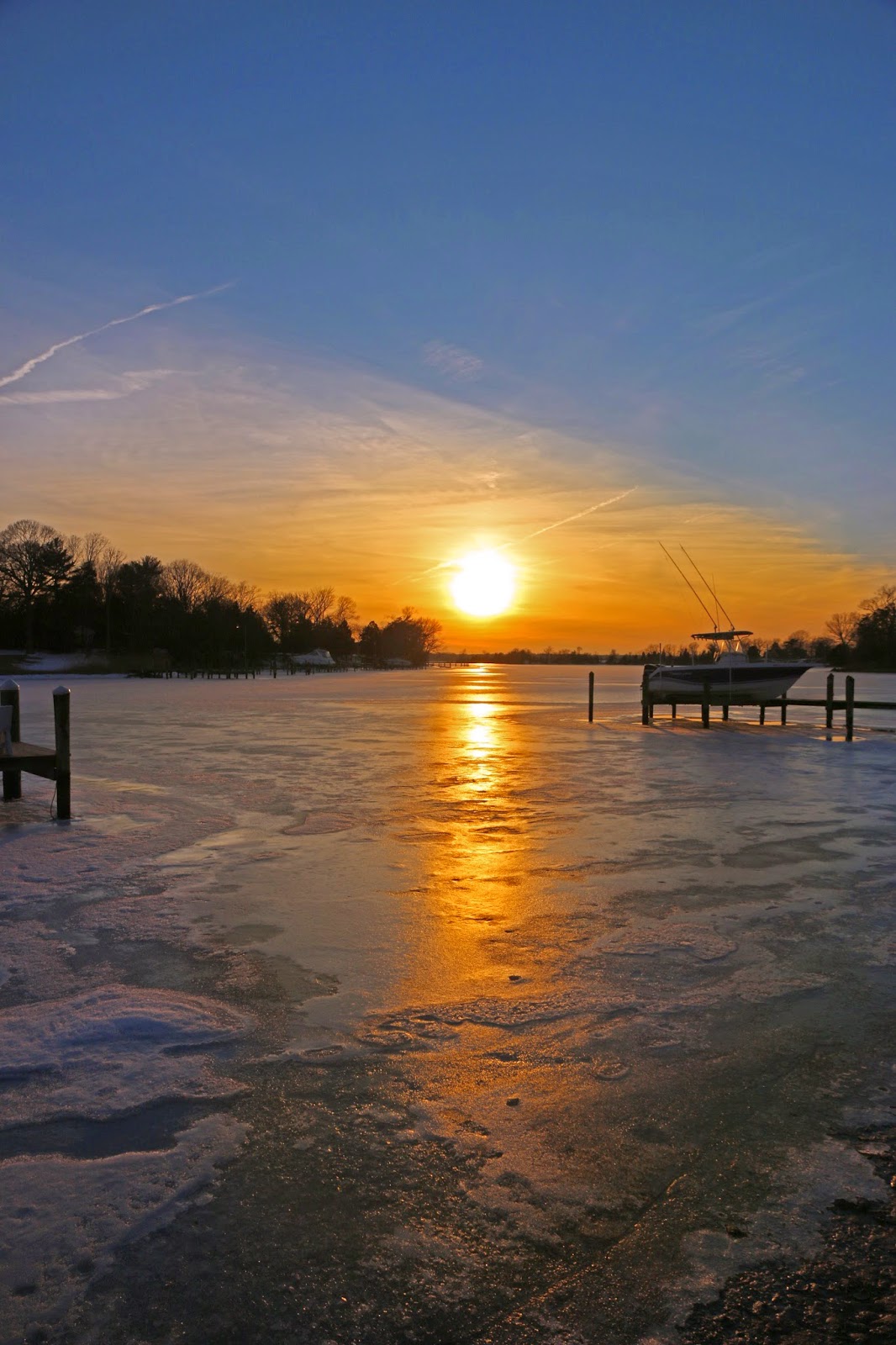 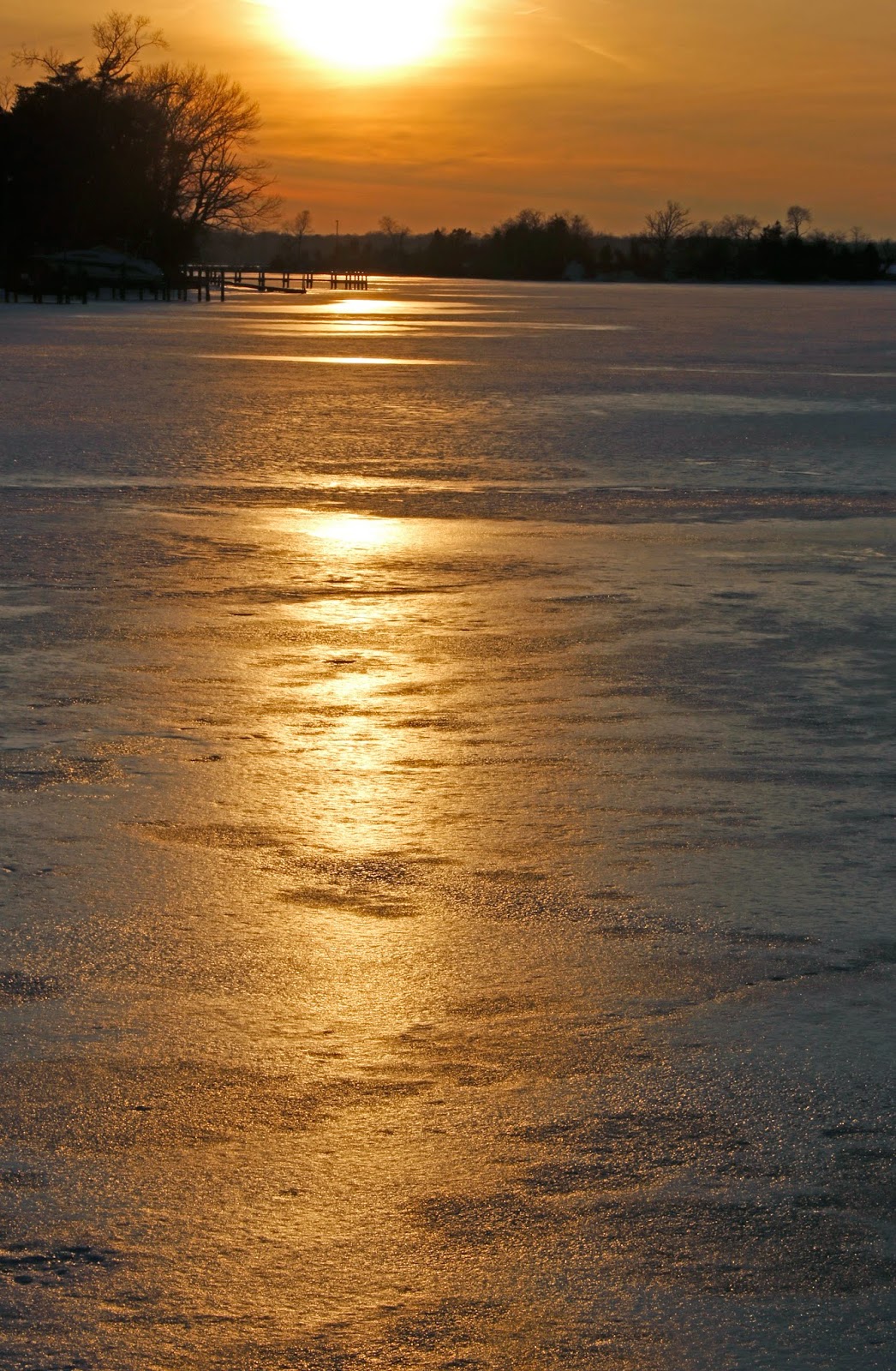 Frozen all the way to the mouth of the river upon our return!  Supposed to be about 3 inches of more snow today, but this early morning does not show that.
Posted by Tabor at 4:59 AM 11 comments: 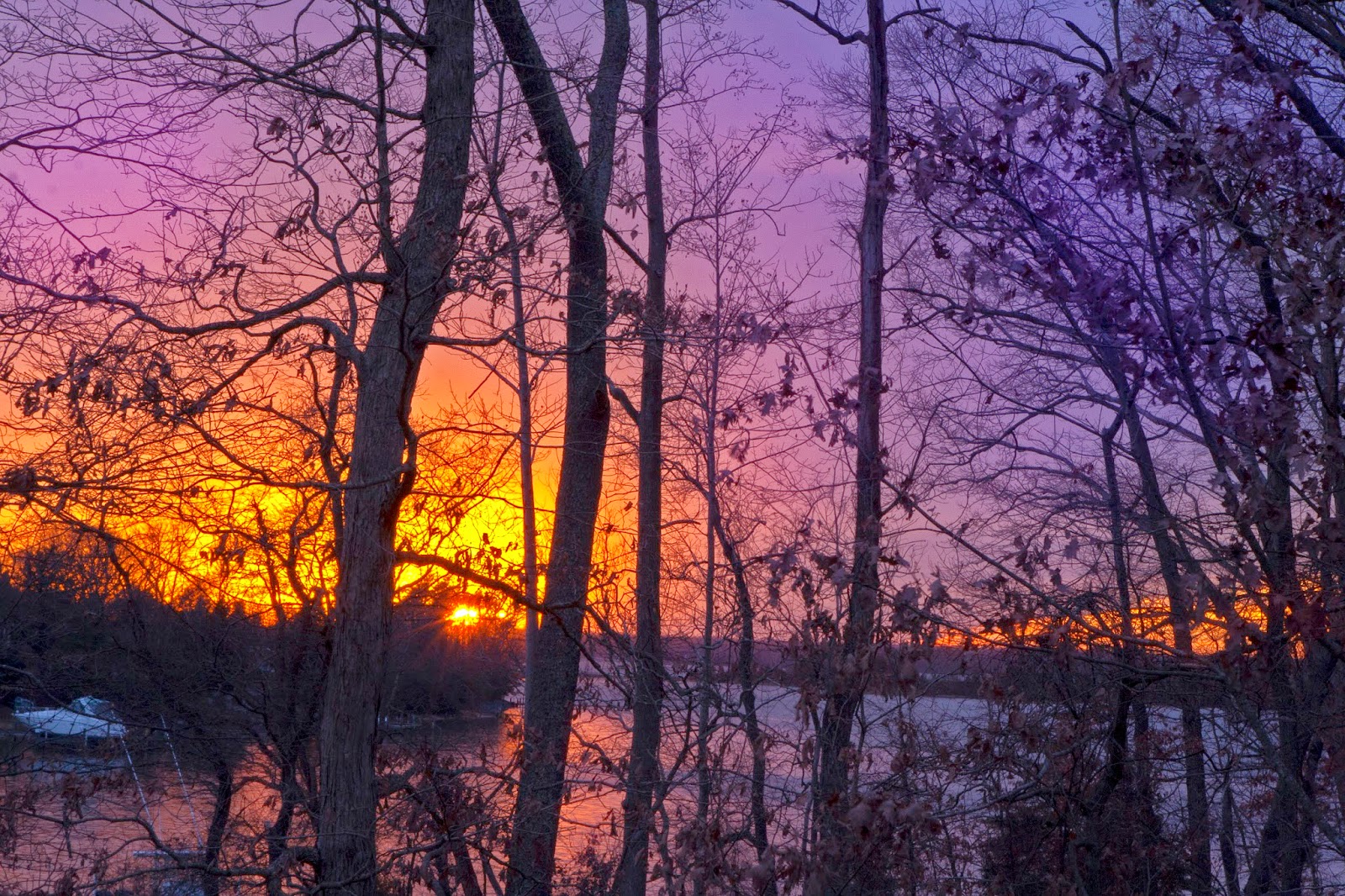 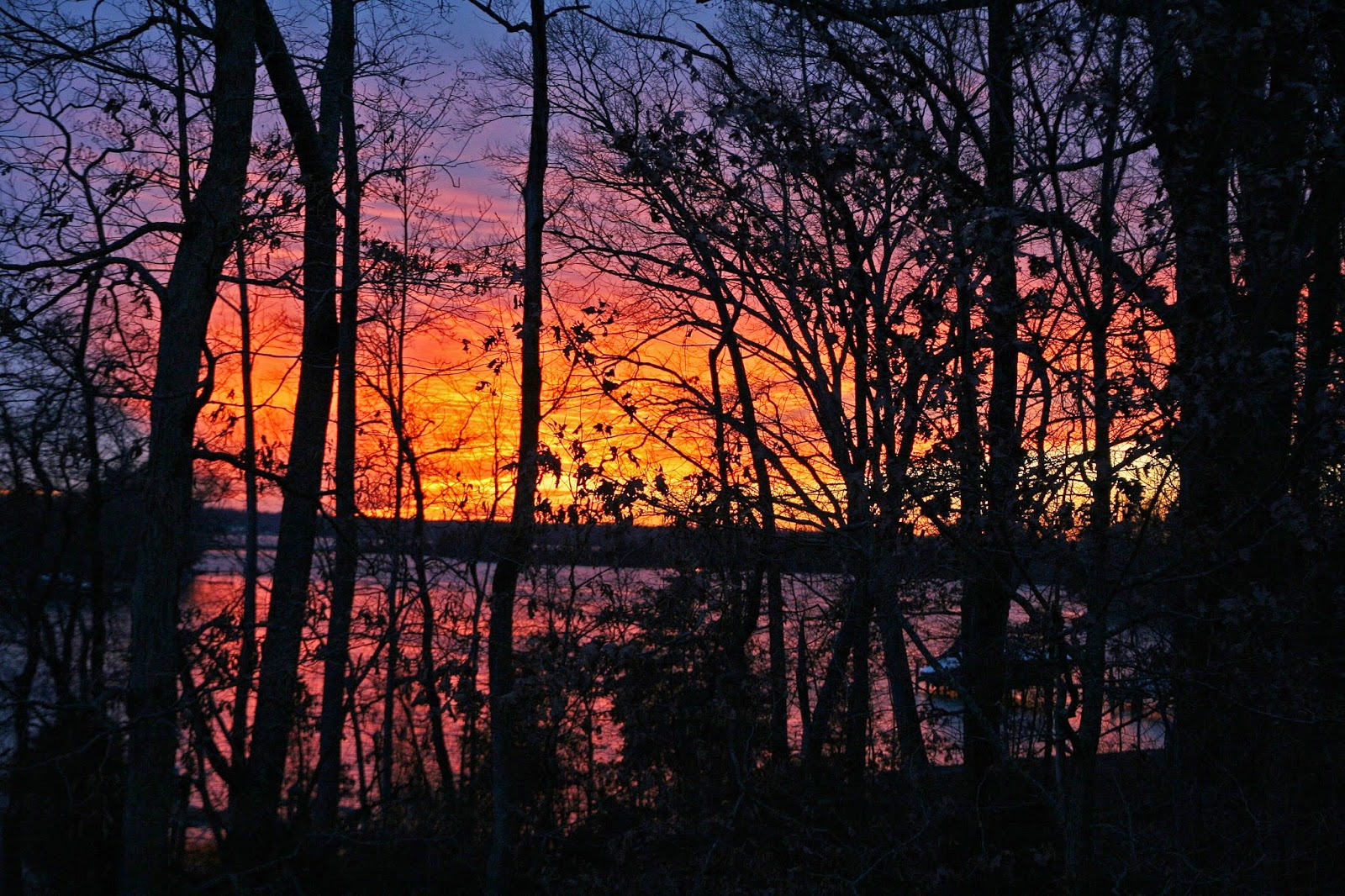 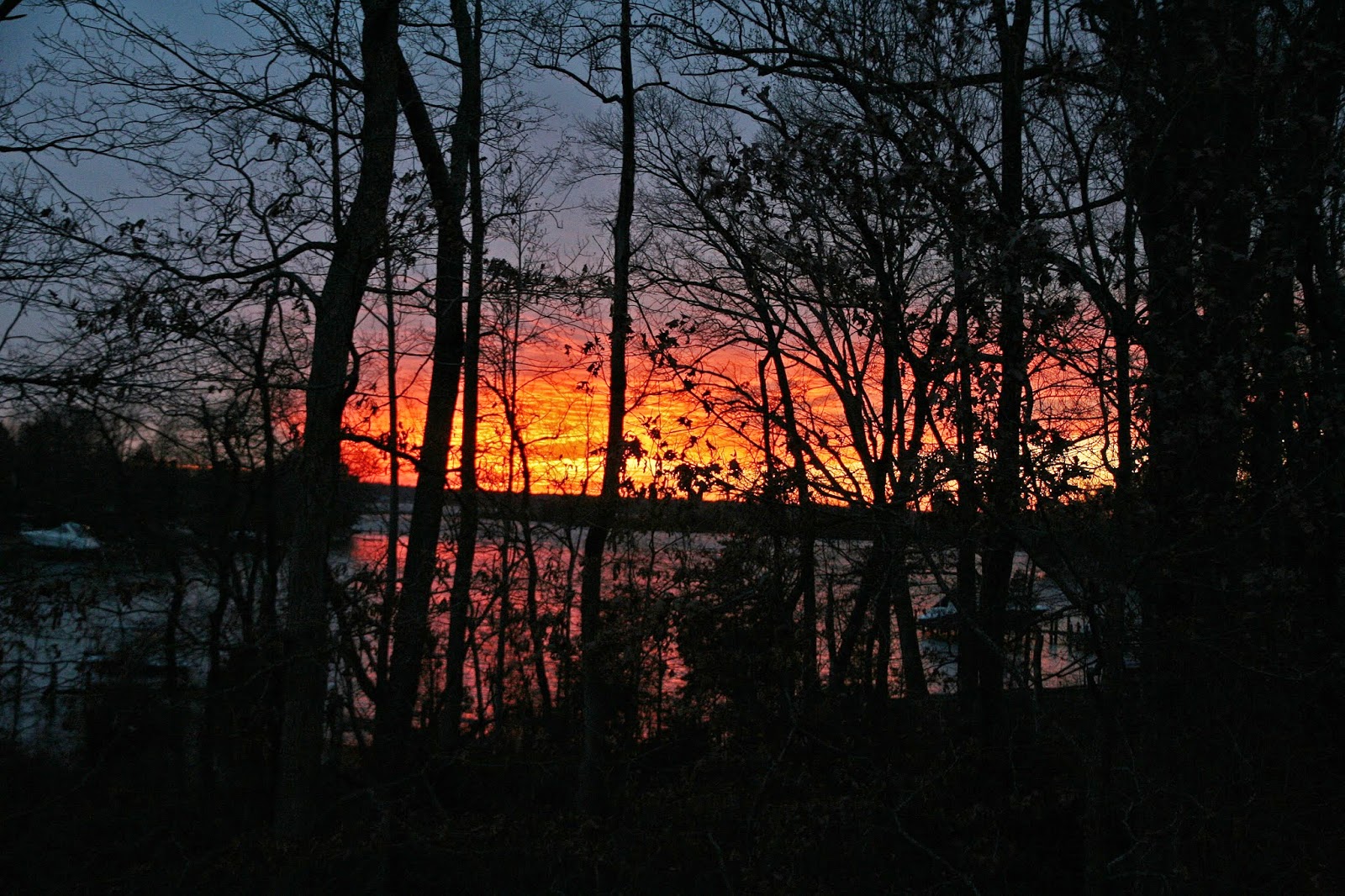 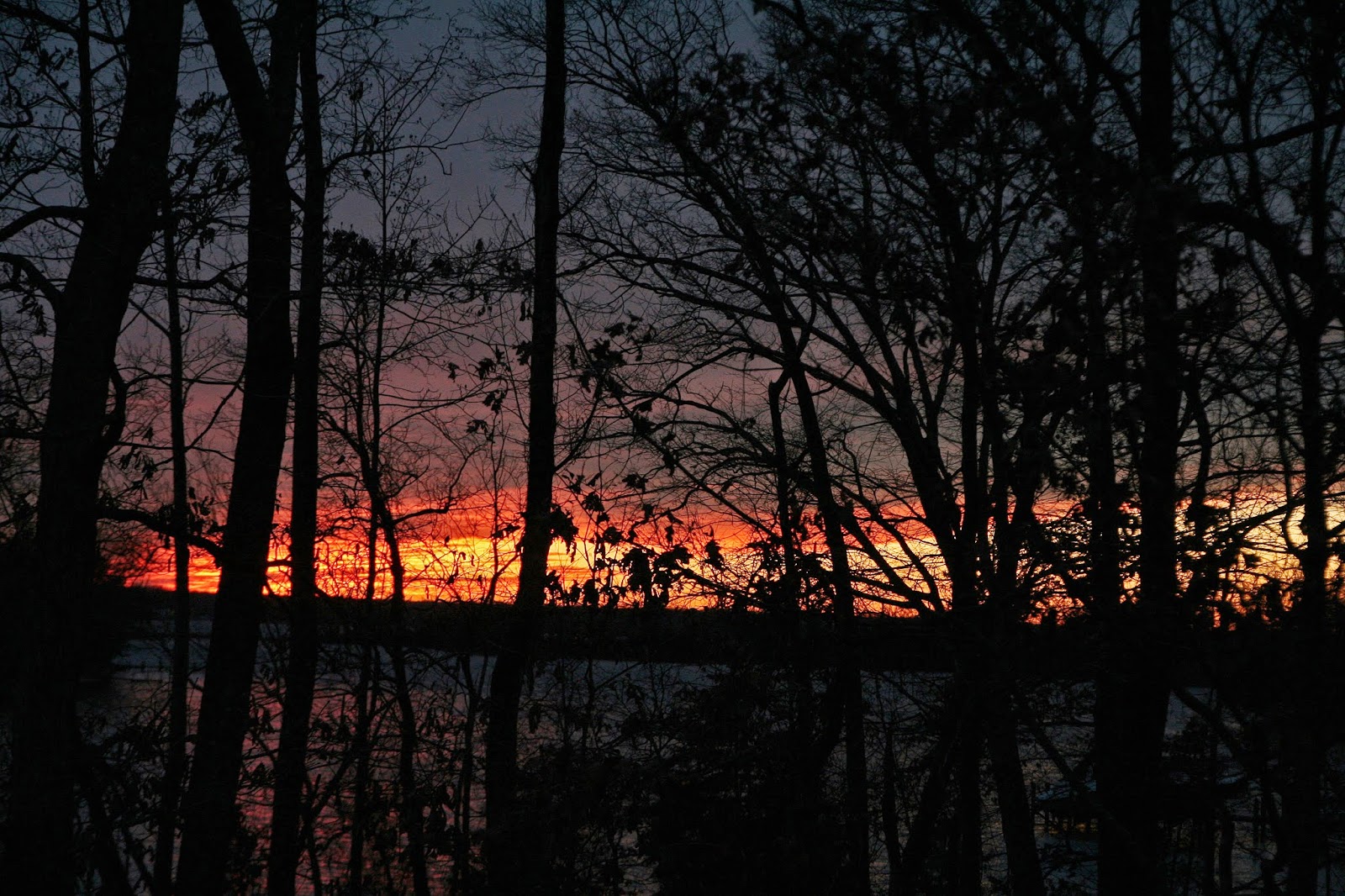 Some days have a spectacular way of saying goodbye.  Above is a series I took before heading to Florida.  Two days ago I said goodbye to that tropical state.  I returned to find our finger of the river frozen all the way to the mouth!
Posted by Tabor at 10:38 AM 12 comments: