Some days I feel like everything I attempt is a struggle. The whole day remains out of sync. It is as if some black whole is sucking out my energy and then laughing in my face as I trip my way forward. Getting someone to respond to an email, getting someone to respond to an invitation, getting the weather to cooperate, getting my exercise schedule back on track, keeping that overstuffed pantry organized, slowing down time are all struggles. Then I stop what I am doing and take a short boat ride with hubby and we head down a part of the river we have not visited in a long time. I take a deep breath and this juvenile bald eagle appears in silhouette in the distance on a branch and then flying overhead and I am able to capture the perfection of his/her ballet in the sky. Sometimes when I just snap, there is no struggle with my photography. So much for trying too hard. 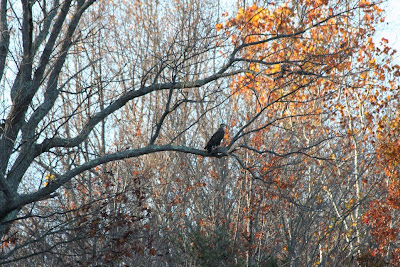 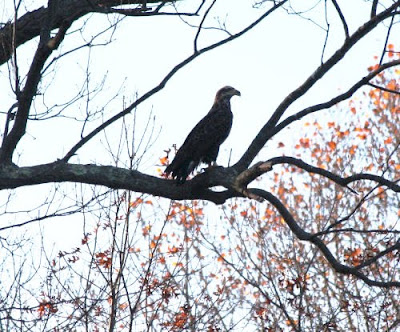 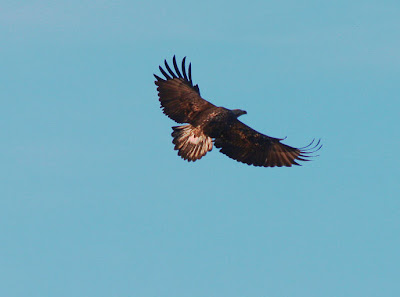 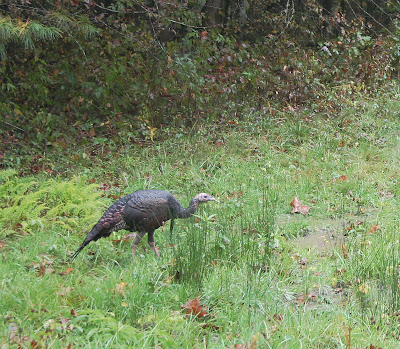 I know, this is not your best day. Just keep your mouth shut and your head down! 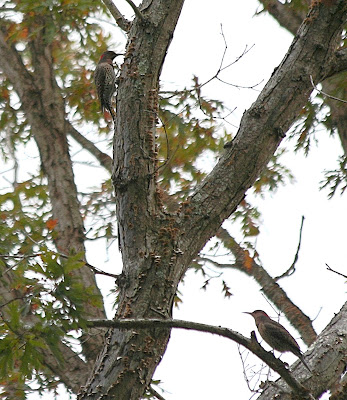 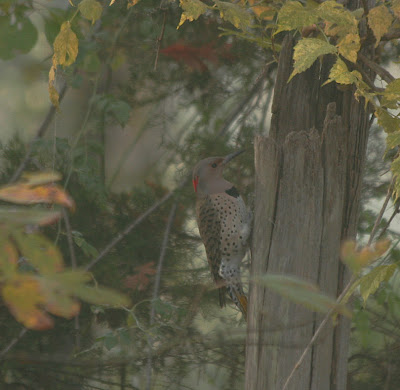 The flickers (Colaptes auratus) come from out of the deep forest as the leaves begin to fall. They are always calling and darting along the base of trees in the interior of the forest during the summer and hard to find when I want to photograph them. These woodpeckers are now easier to see because of the leaf fall which opens the woods. My woods are old so there is plenty of dead wood full of insects and lots of ants and bugs under the leaves on the ground. Flickers are not friendly neighbors as they chase away other birds and fly in small gangs. They are the lesser bullies in the playground and followed the gang of robins across my front yard last week, keeping them from getting all of the bugs. But as a gang of brutes, they do dress nicely. I think these are females (except for maybe the one on the top) since the males have moustaches! (One of these days I AM going to get a really good photo of this bird!)

Not the Leonids, But Just as Nice 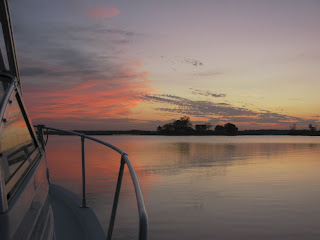 We set out on the boat just at sunset on the evening of November 17th to see the Leonid meteor shower that was being promoted in all the science news columns and which was supposed to peak around this time.  The gentle breeze was cold and so we were bundled with gloves and hoods and prepared for an uncomfortable wait.  Lying back on boat cushions on the bow of the boat at odd angles, we saw at first the fake beauties of mankind that shine in the heavens, the planes and the satellites going on their speedy ways.  I thought that satellites all moved in similar orbits, but not those in my sky above the river.  They are just like mankind, no sense of patience about them and criss-crossing everywhere in their buzyness.  This photo below shows both a plane and a dock light that were distracting as the sun sunk low into the grayness. 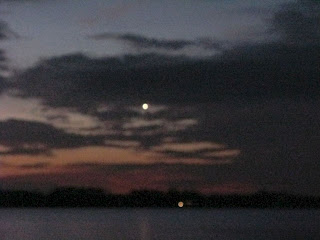 Then finally as stiffness set into my old joints and I thought I might never move again I turned my neck slowly to the eastern sky and I saw a shooting star!  Just one, not the dozens predicted.  It was bright but not long.  Then as I was gazing in that direction and my eyes refocused I saw Halcyone, Sterope, Celaeno, Electra, Maia, Merope, and Taygete in their misty glow.  They were not easy to see.  I think they hide because they have been pursued by Orion due to their unusual beauty.  Seven sisters gathering in one place is not to be ignored.  They winked at us from behind a few misty clouds.


When I got back to the house and downloaded my little collection of photos, this one was revealed.  I did not try to take a picture of the stars.  Do you think the Seven Sisters included this photo and wanted me to remember them? 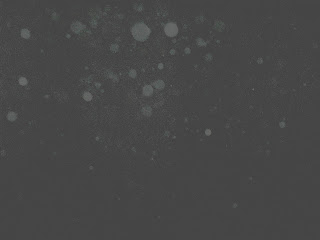 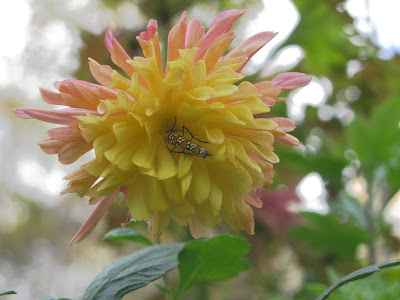 This photo was taken about a week ago. I love this mum for its cone shaped petals and its pink tinge on the border petals. It almost looks like a dahlia. I guess I really love this mum for its ability to use jeweled accessories so dramatically ;-). I have searched to identify this beetle without success. I have seen it before in my garden and it looks like it is searching for small insects inside the flower. (When I went out two days later just before the cold norther, this long beetle was still there!) Click on the photo for a better look. 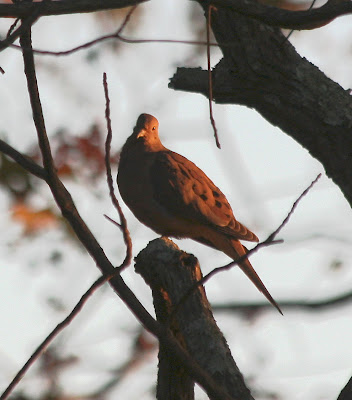 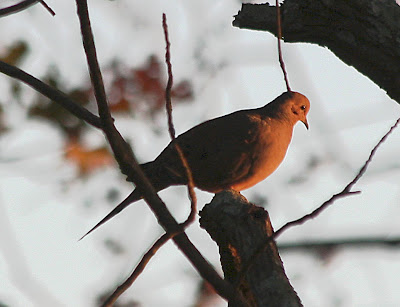 That time of year when naked trees no longer hide the birds has come. I can spend time watching them with my binoculars and trying to capture their beauty with my camera. The gray doves are here all year, but mostly seen feeding on the ground beneath the bird feeder. This one flew high onto a snag and then posed with that coy tilt of head in the warm glow of the sunset. He looks bronze rather than the soft gray that is his true color. There whiffet and whistle of wing when they fly is common to most. Some people feel their song sounds like a mourning call, but I find it very soothing as if comforting a small child. Their feathers are most seductive looking as if they were made of smooth and soft suede and inviting you to stroke them. They can live many years. I once owned a ring-neck dove and each morning his song would sing me awake. We had to give him to a friend before a long-ago move, but I think he is still alive and that was over a decade ago. For some reason they remind me of chubby and loving nannies.

We (I) Beat the Thieves! 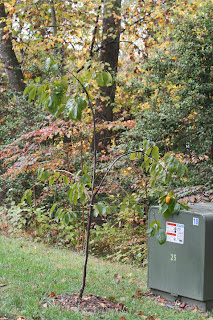 This scrawny little Asian persimmon tree was planted last year as the anchor for an ornamental bed that would help to hide the ugly electric box beside the driveway. This bed has been slow to develop as we were waiting for the deer fence to be installed to protect anything that was planted, but the tree standing by itself has thrived. 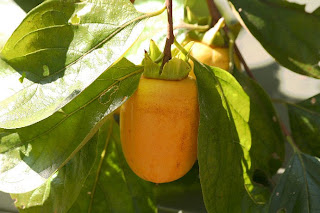 It is about 8 feet tall and it produced about 8 fruit this year. These persimmon are oval and unlike the traditional Asian round persimmon that can be purchased in the grocery stores during the winter holidays. We watched with care the ripening of each orb. While we have wild persimmon in this area, this exotic variety produces larger and more flavorful fruit and has no seeds. Besides, Tabor is not willing to climb that high like the racoons do for such reward. 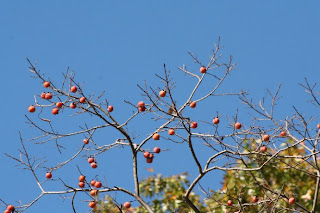 If picked too soon persimmon are very mouth puckering as they taste of alum from the high tannins. But if you wait until the exact day of ripeness they are perfect envelopes of sweet juicy fruit. Of course, you have to beat the four legged thieves by picking them exactly one day early and letting them further ripen on the kitchen counter. Needless to say, they do not all ripen on exactly the same day, so guess who spends their time molesting fruit waiting for it to feel like a water balloon? I did just read that I can pick them earlier and let them ripen on the counter or put them in the freezer for 24 hours. With only 8 I hesitate to experiment. But with hubby gone during the time I harvested them I did get to eat them all myself.
Posted by Tabor at 7:42 AM 11 comments: 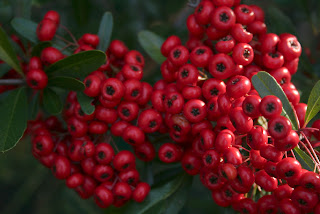 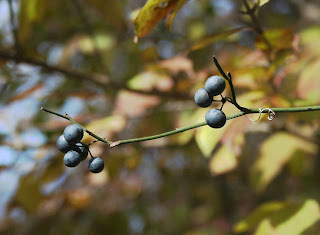 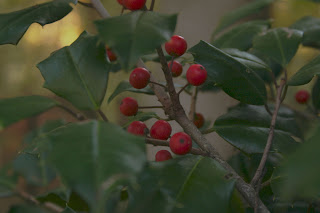 Brightly colored beads
Jewels left behind
On naked arms and bare necks.
Recently washed
By the angry rain.
Refusing to break away
And tumble like the colored leaves.
Determined to glow
Even when the white snow
Crests their faces
In months to come.
Or, perhaps, waiting until someone eats them. 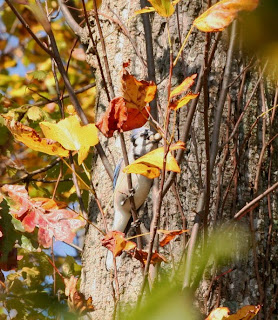 Rare is the Wood of the Koa Tree 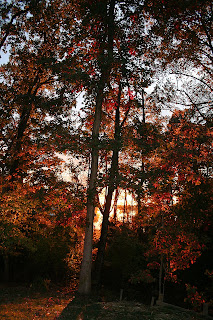 I am tucked away in my cave of technology watching a contrived scary movie and eating popcorn for dinner. Suddenly, there is a flash of gold and red and bright glitter just outside my deck door. The room is filled with the light of fire. Is there a party going on across the lawn? I think I see that someone has set up tiki torches and someone else with nice pectorals is juggling flames over the top of the water. There is probably laughter and island music, I'm sure. I hear a sexy drum beat. I think I hear the Pesaga Boys or maybe it is the Beamer brothers or wait, I think I see the sun browned shoulders of IZ sitting on the dock. I set aside my glass of wine. There must be something sweet with coconut and rum waiting for me. I rush to the deck so that I do not miss one second of this celebration of the end of this fall day. Please click on the photo to join me and don't forget to bring your grass skirt.
Posted by Tabor at 5:41 PM 9 comments: 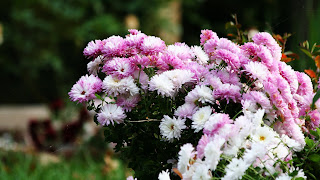 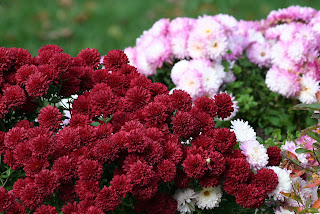 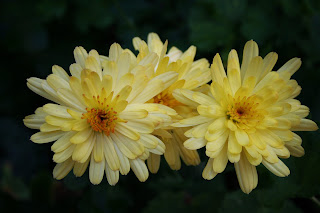 Mums are in their full regalia even after the heavier rains earlier in the week. They are the most faithful and healthy of friends returning each fall. Several new plants are blooming beneath the pyracantha hedge where I carelessly broke off branches, and, instead of putting them in the compost pile, I stuck them in the ground this summer. Mums are hardy and can be grown almost anywhere. I am now on the hunt for some new and more exotic varieties to decorate the yard and to extend fall next year. (You really need to click on the last one!)
Posted by Tabor at 9:13 AM 3 comments: 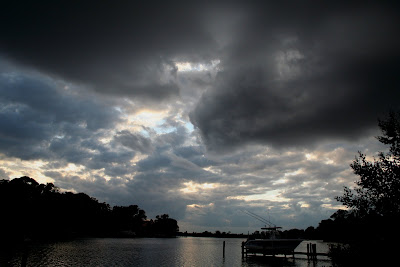 This is the emotional time of year when passions run high and nature throws her dramatic fits due to all the farewells that are happening everywhere. Goodbye flower petals, goodbye butterfly wings, goodbye warm air kisses. This time of year is filled with rushed goodbyes.

An angry front of cooler air that had brought a gray hello moved in last week. It was preceded by the most exciting swirls of dark clouds, some hung high and others were gray and feathery and just grazed the tops of the trees. This storm was silent. Even the lower part of the dramatic winds only moved the low hanging clouds and did not bend branches or toss their leaves. The leaves that still had a strong grip shivered ever so slightly as if in excited anticipation of the powerful event yet to come. The sun was shoved abruptly behind the horizon as bright stage lighting was not needed for this drama. There were no special effects such as thunder and lightning. Only the power of the air moving like a giant invisible hand pushing up high.
I stood barefoot on the dock and shivered myself, although not from any cold, because the air temperature was still very nice. No birds, no fish, no wildlife hung about to welcome this first act. I was alone in the audience.
Posted by Tabor at 6:40 AM 9 comments: