Am I watching my world more intently this year? Am I observing Mother Nature more closely than before? Was the hot weather here at this time last year? This season seems to be much wetter when compared to the same time last year. Are we becoming a tropical micro-climate?
Can I keep up or am I going to always be a mediocre/bad gardener?  Continue reading my rant and enjoy the beauties from my garden.

This year I am just a bit ahead of the weeds, but I know that Mother Nature will beat me eventually. She always does. She is such a marvelous chess player and at least four moves ahead all the time.  I am just ahead of the diseases by removing infected parts of plants and not spraying.
This summer I focus on native plants.  I am trying to get rid of many of my non-natives.  NOT ALL OF THEM!  I have the favorites that I love in spite of the fact they do not contribute to pollination or to insect habitat.  But I am trying to make more room for the natives, the locals, those that arrived before we started keeping track of which plant belongs here and which does not, which plant is not invited to the garden party and which plant has a long life-cycle of supporting all that is living but absolutely no joyous beauty and spreads like crazy.  I have to be careful because there are environmental Nazis out there in the plant world that go crazy if you even think about a non-native for your yard.  Maybe when they start paying the taxes I will listen more closely to their myopic chant. 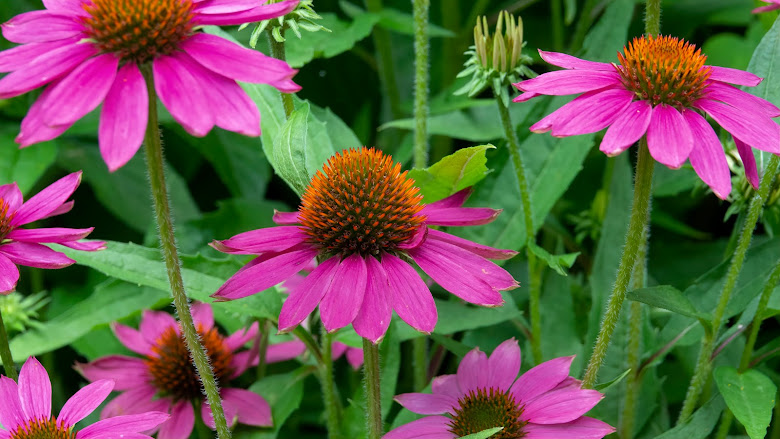 I used to not speak up, but now I no longer care that my yard is designed by me without adherence to some tightly structured environmental map. I do not use pesticides, use very limited and careful spraying of a fungicide on my roses on non-windy days in the early and mid-season, and do enjoy the varietals of native echinacea and St. John's Wort...even though these do not meet strict compliance of the true native.
How about you?  Are you a purist when it comes to gardening?
Posted by Tabor at 11:12 AM 8 comments:

I used to sketch with a pen and ink when I lived overseas.  Clearly self-taught.  I sketched seashells because I loved the shape and symmetry and because I lived in the South Pacific and had little to do when I was not a work.  Natures beauty has always captured me.  This was before children, of course.
Now I sit at home and read or watch TV or cook. The cooking part is really something I should avoid. So, instead, I then turn to working on my photographs. With spring and early summer blooms there is plenty of stuff to digitize.
I always admired the flourishing of art and science under the Medici family in Florence, Italy in the 1500-1600s. I even have a cookbook with Florentine recipes collected by Lorenza de Medici and accompanied by paintings by Giovanna Garzoni, a famed female miniaturist of that time. The cookbook was a gift and published in 1994.  While perusing that cookbook for recipes it stimulated my still early attempts at still-life art below from my photographs. Each takes 3 to four hours from beginning to end if I do not count all the sorting and deleting!  I also sometimes go back days later and "fiddle."
I admit that these are still broadly stylized and derivative with no consistent style, but I do like doing them. I have not moved into the areas of bugs, fruit, and animals...yet.  Do you have a preferred one? 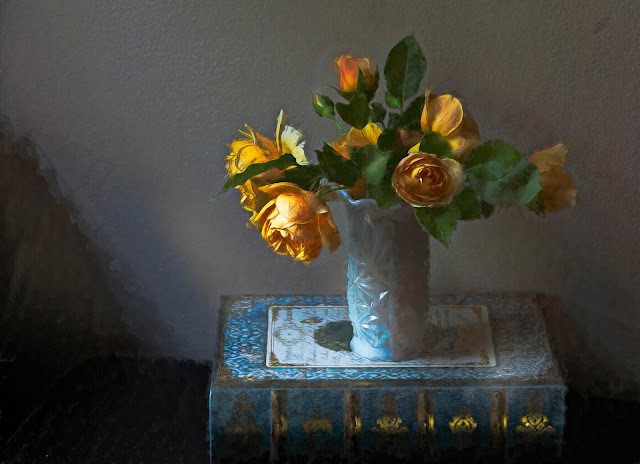 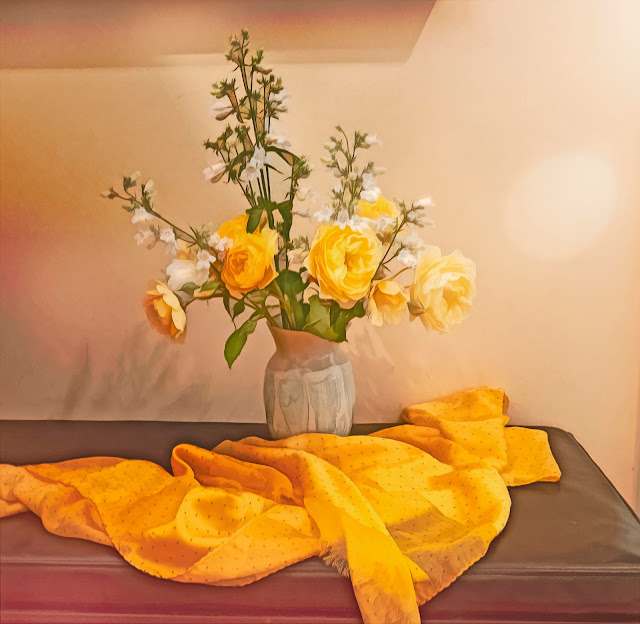 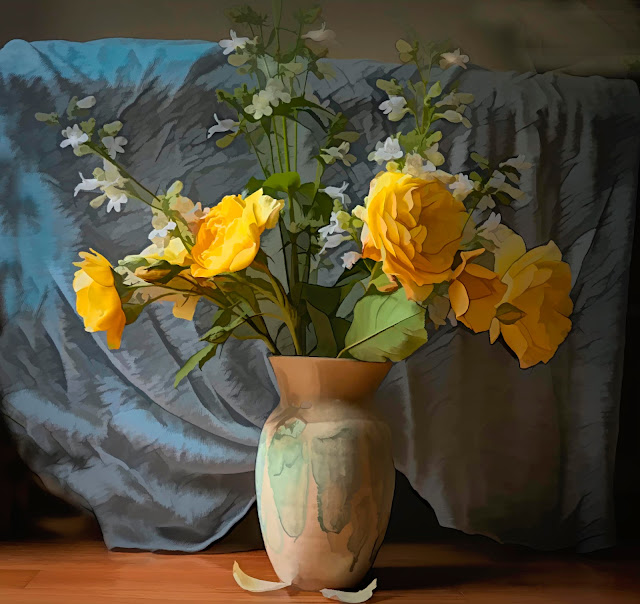 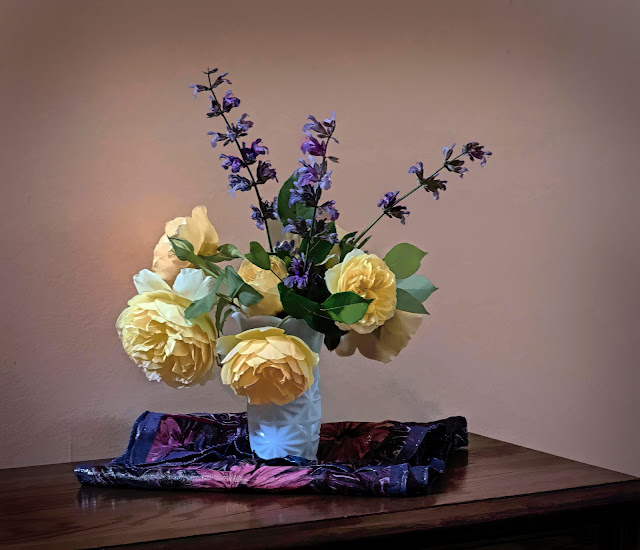 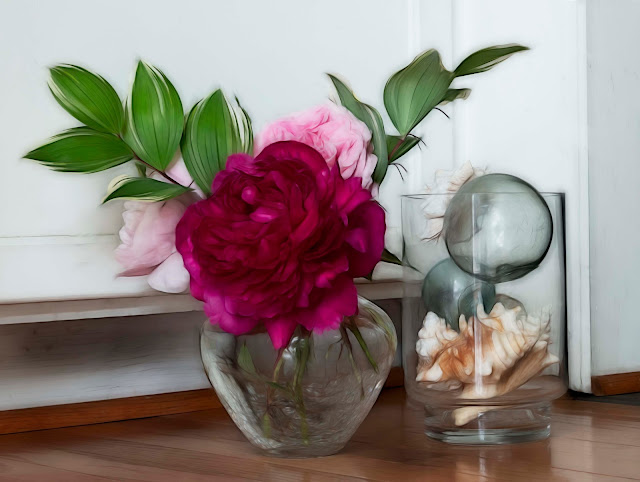 What is the Rush?

The problem with spring is that it leaves so quietly and carefully that you only notice when the grandstand band of colors arrives pushing an air of heat and humidity ahead of itself and down your throat.
I soon realized in my mid-morning weeding the other day that I will have to get up earlier.  I accepted that the long-sleeved shirt I was wearing might protect me from the sun but needed a much lighter weight to protect me from perspiration drowning.  I have already gotten three tick bites this year and not even left my yard!  Summer is here.
Below some of my beauties for your lock-down pleasure. 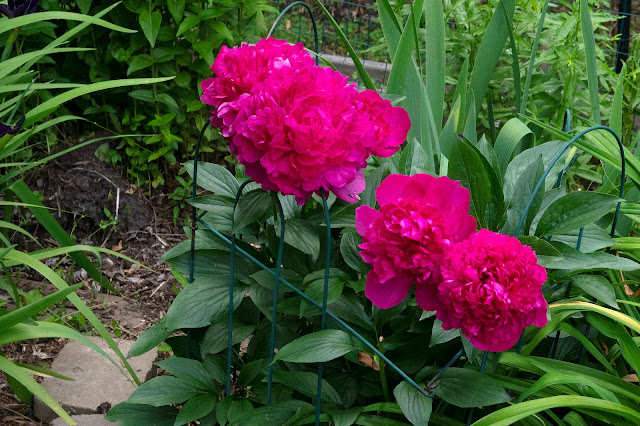 These peonies above have finished blooming weeks ago but they made lovely bouquets. I had promised myself I would try some still-life photos, but never got around to it. 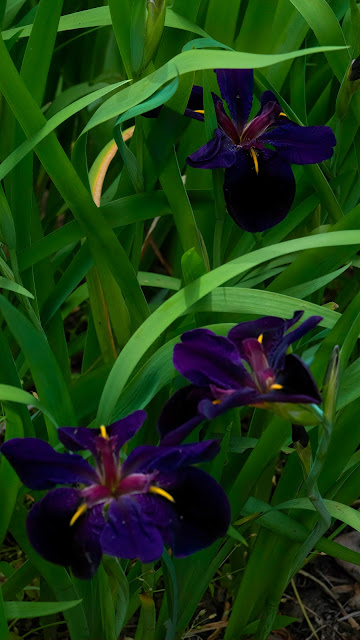 These Asian iris above are blooming abundantly in the sun and last only a day.  They spread like crazy so I will have many tubers to give away in the fall. 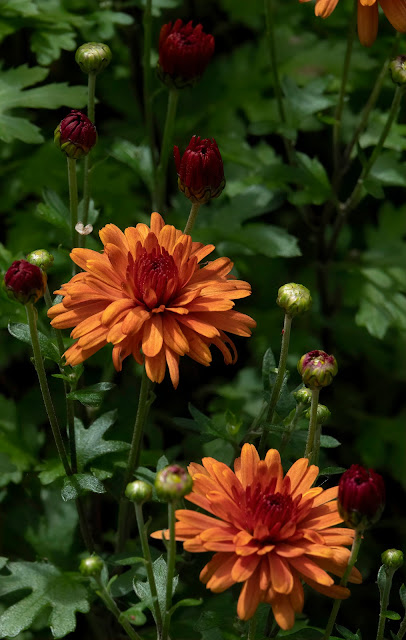 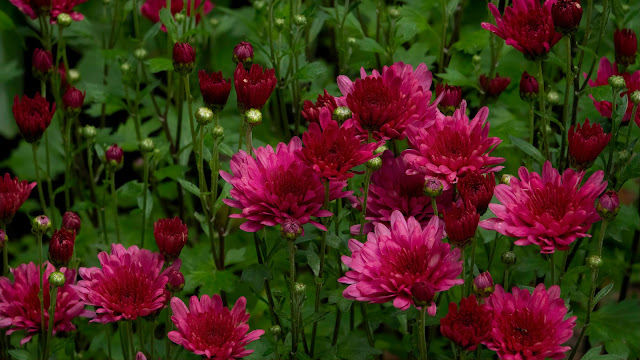 I realize that mums are supposed to bloom in the fall, but even after pinching these back, they were in a rush to show their colors!  I am hoping they are double blooming??  Some mums are and I am too stupid to remember which ones because some are new and did not double bloom last year. 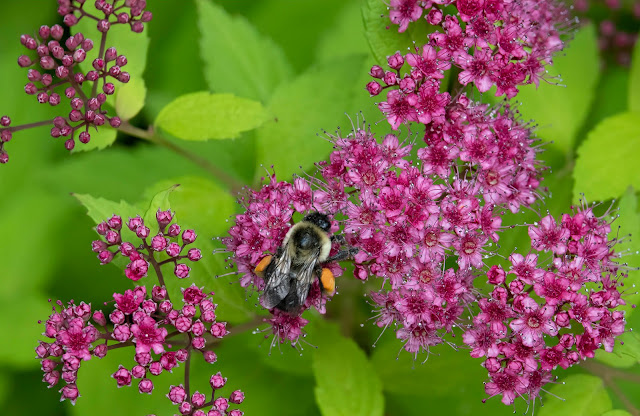 And while the bumblers arrived in the spring, they are here throughout the summer!  Note the pollen saddlebags on this fellow!  If he can fly I can survive this pandemic.
Posted by Tabor at 8:18 AM 11 comments: