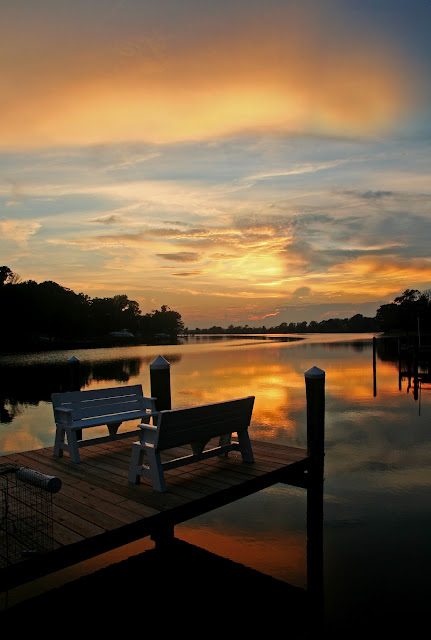 Nothing wrong with my hearing.
Posted by Tabor at 3:09 PM 18 comments:

Laced in a ribbon of perfection was this gift of unbelievable proportion that can only be appreciated by those who have been given so many gifts in their gray-haired days and this afternoon it fell in my lap.  Reading a P.D. James mystery, which requires some work on my part as my short term memory is challenged with the introduction of each new but well-described character, I took a glass of white wine out on the deck with the book in hand and fell into the chair sighing as I leaned back in the dappled shade of a late autumn afternoon.  Chores were done and party plans for a volunteer who was departing had been completed.

As I rested my head, I looked high in the clear blue sky directly above and saw between the dance of still-green leaves two osprey playing in sweeping lazy circles, perhaps getting into a Zen mood for their long journey south in the coming weeks.  The angle of the sun caught the soft snowy white of the underside of their wings with each circle they made.  Their dance had been well rehearsed in years before and it was a synchronized ballet of love and friendship as the steady breezes of changing weather caressed their backs and lifted them higher.

I turned back to my book, but soon was distracted by three red-naped flickers whose rusty call demanded my attention.  They were thrilled at the full larder in some dead tree limbs high above or perhaps they were just joyful at the perfect weather that had finally arrived after a hot summer.  They hopped from tree top to tree top in noisy joy acting like teenagers given an early break from school.

Before I could return to the story of the novelist who had hung himself (or was it actually murder?) the ducks in the river started laughing like old men as if some dirty joke had been told.  Their flat quacking laughter carried all the way up the river.  I could just see the Vs cutting the surface of the green water through the tree trunks as they moved back and forth calling names and laughing.

The final gift on this precious afternoon was the lilting song of the common house wren perching on the snag of a nearby tree to celebrate sunset.  The call was so pure and sweet and phenomenal because it came forth in such silver song from such a small brown bird.

Who needs pearls, rare orchids or Swiss chocolate when my neighbors provide this talent for free?
Posted by Tabor at 8:32 AM 15 comments: 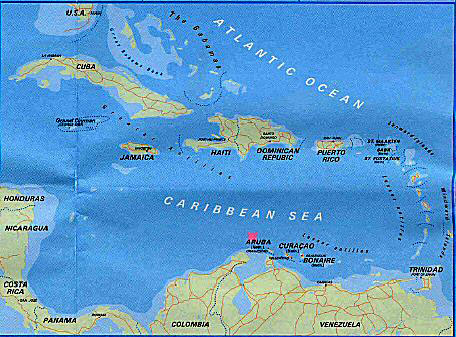 I am always amazed at the combination of strength and beauty in birds. Some, like pigeons used bits of iron in their heads and shoulders to determine direction from the magnetic poles of the earth. Others must line the stars and moon and the sun in some magical mapping strategy, because they return to almost the same resting places when going on their thousands of miles migratory journey twice a year. Hundreds of millions of birds make the 600-mile non-stop trip across the Gulf, or take the longer route around it twice each year.  The longest trips are more than 24,000 miles round trip each year!  Almost half the birds in the United States are migratory species.  Birds fly an average of 15-45 miles per hour, making me now feel guilty that I do not get off the couch more.

These feathered athletes need places to stopover for rest and refreshment, and it is amazing at how these places are within yards of the place they stopped the year before.  Therefore specific habitat such as forests of maritime live oak and pine that rim the Gulf are crucial for their survival, as are undisturbed water ponds and marshes.  And some birds like Osprey split up for the winter months down south taking separate vacations and then reunite successfully months later.

I was thinking of this when I saw several species of birds  on Aruba.  They have over 200 species and  I saw only a few.  My photos are not great as I was with family and did not want to hold people up while I diddled and dabbled.  Many were shot from the open window of the car!  But you may enjoy the Olympian fliers of Aruba. 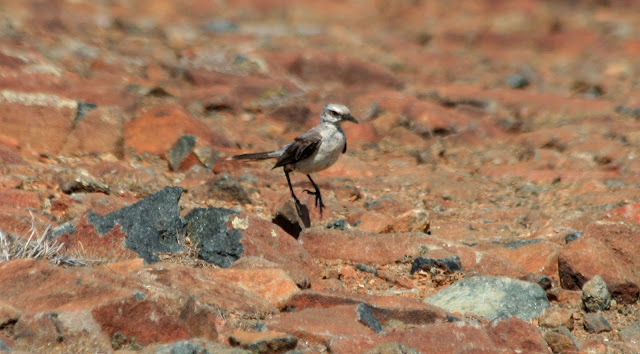 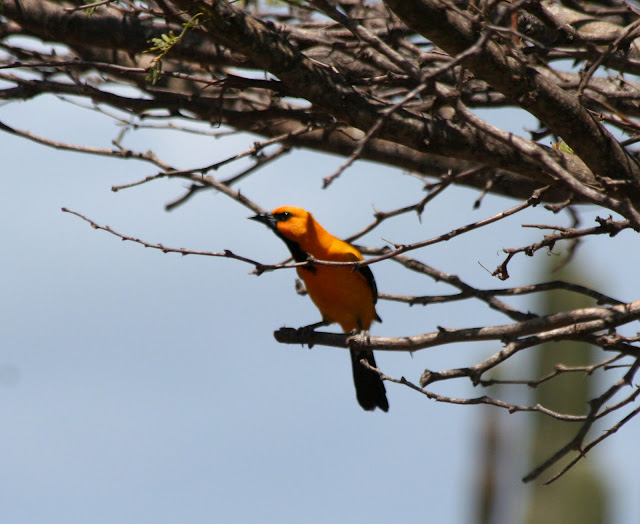 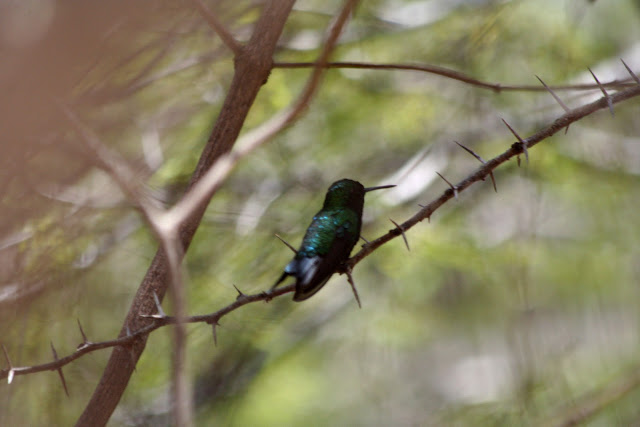 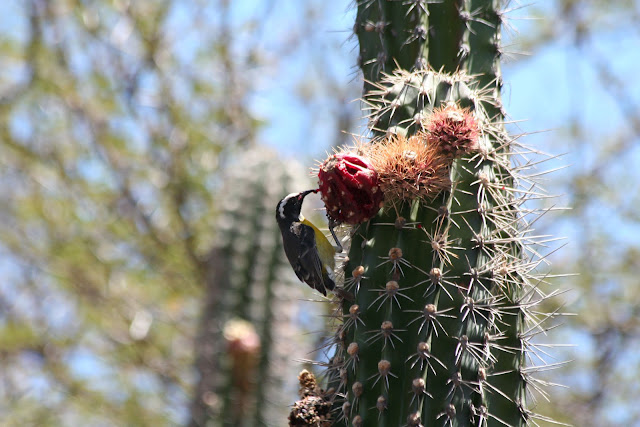 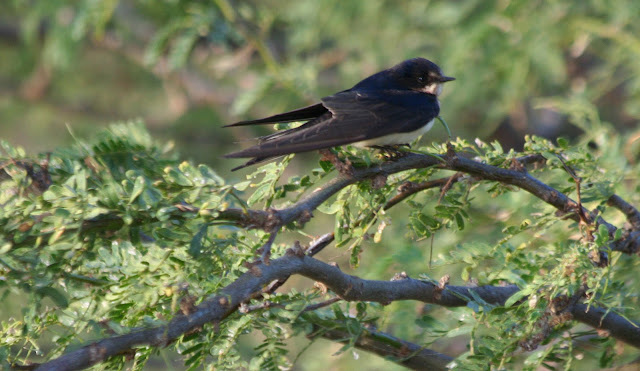 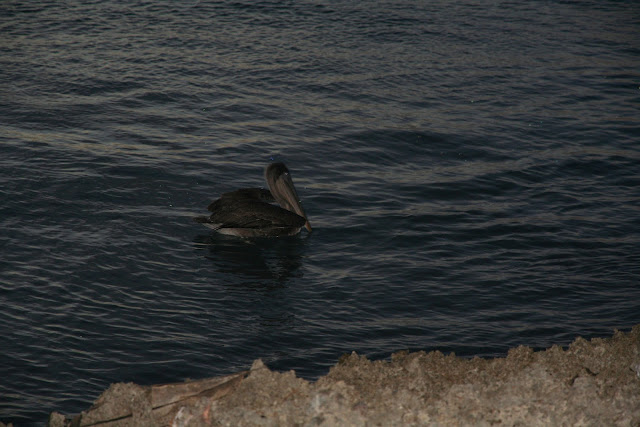 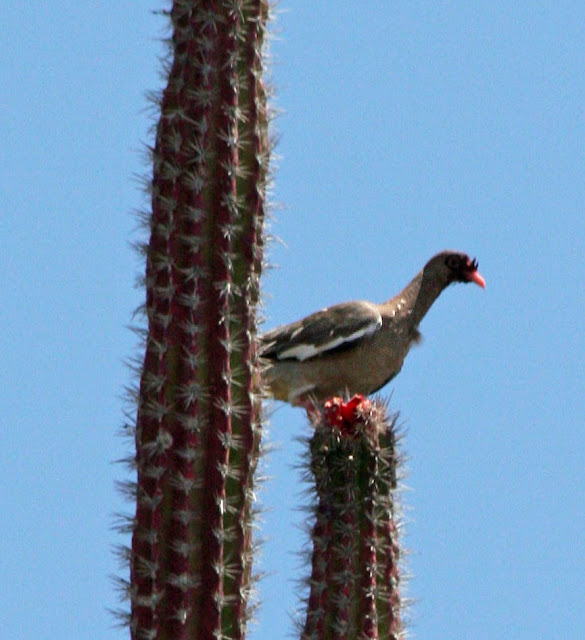 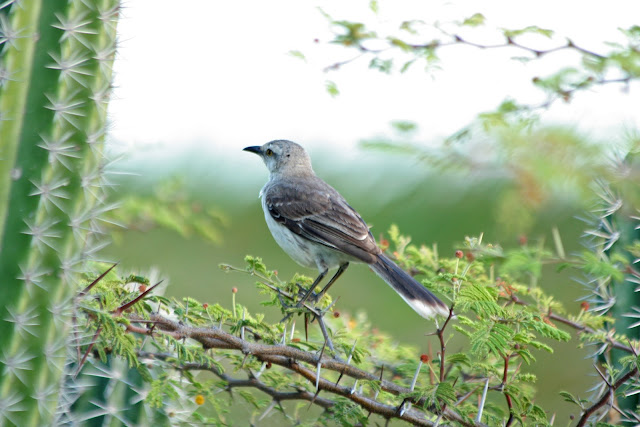 My recent escape was to the desert island of Aruba.  Temperatures were about 90F with a constant trade wind blowing across the whole island.  Why would I leave the beautiful fall in my woods for such an experience?.  I had 'points' that were about to expire and that made the condo FREE!!  It was the low tourist season for them and that meant no waits in line at any restaurants, no re-scheduling of any tours, beaches that were not crowded and a swimming pool that might have only one other family using it at the same time as we did.  The weather was hot, but the shade was just fine. 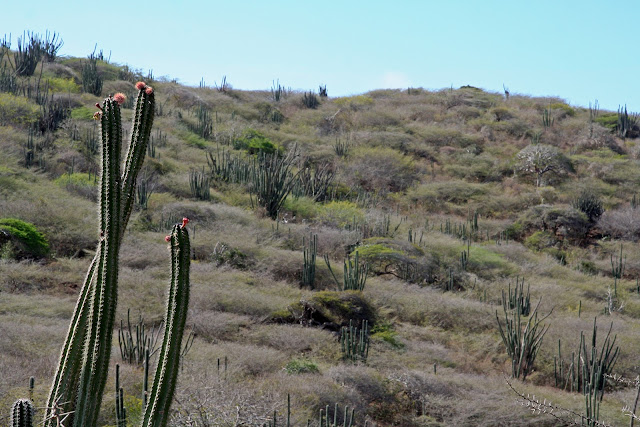 Their desert is exotic and full of a quiet beauty that I do not see where I live.  I even saw small succulent flowers blooming in the valleys between rocks and squat barrel cactus waiting to trip me.  I did not see the rattlesnakes or boa constrictors that live there.  I did see several lovely birds which I will post for your edification later. 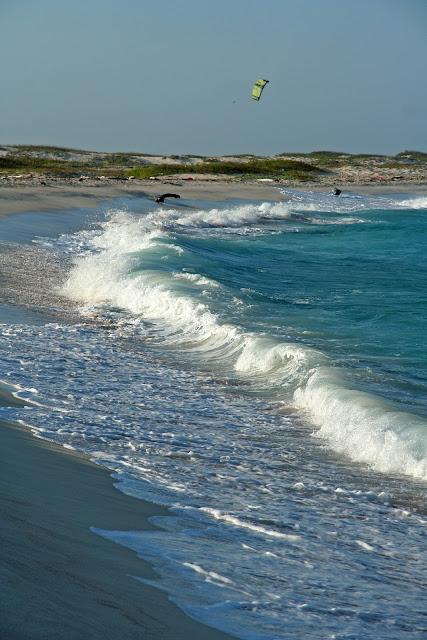 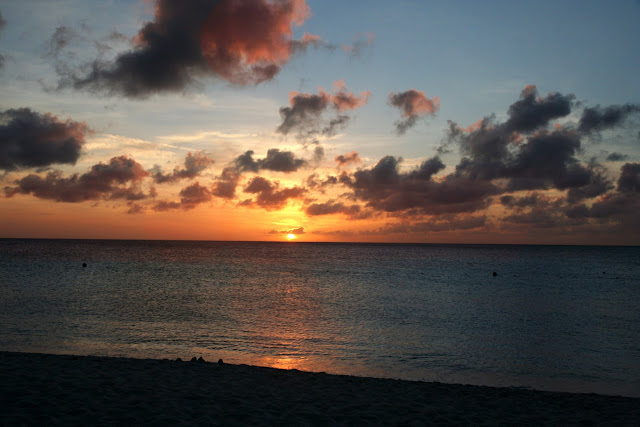 The tourist side of the island with low-rise and high-rise hotels has beautiful calm waters and extensive beaches with rocky outpatches for snorkeling and watching dozens of species of fish and sea creatures and sipping island drinks while watching the best sunsets!

The First of the Aliens

It sneaks around corners and into pathways that you had forgotten were there.  Because it is so exquisitely erotic and such a nuanced change, you are forgiven if you forget how it heralds the cooler weather that will be followed by the colder weather that numbs the toes.  Just when you have lost your heart to this brilliant tease and promised way too much to get it to linger longer, the lovely season will move on and disappear into a crisp gray landscape for months and months, until your heart has fully healed.
The first brave height-challenged agarics emerge from the decay of the end of summer and cause you to pause intrigued, wondering if indeed fairies do dance beneath their shelter under an autumn moon. 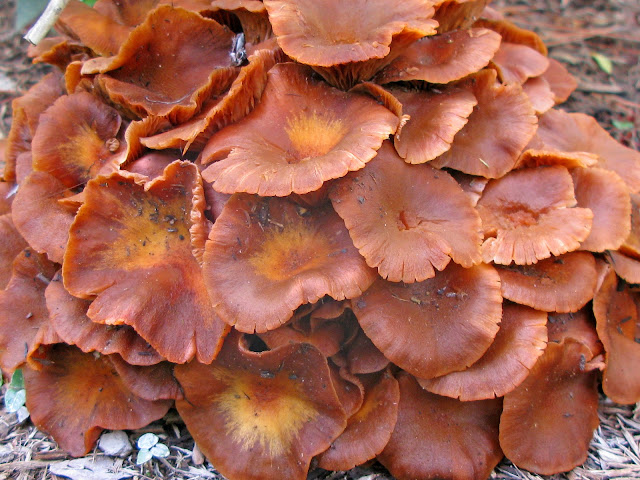 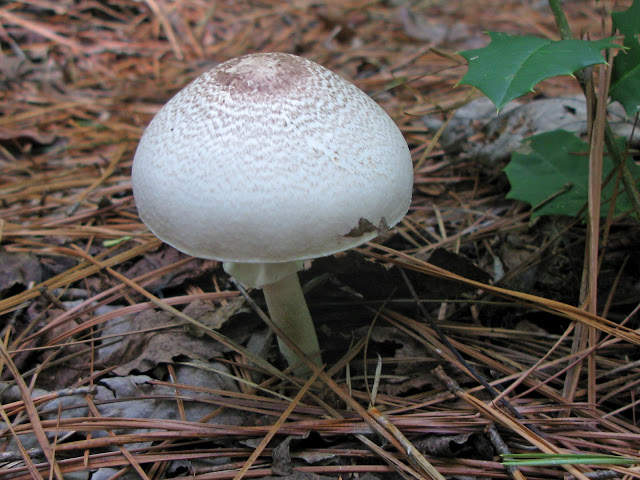 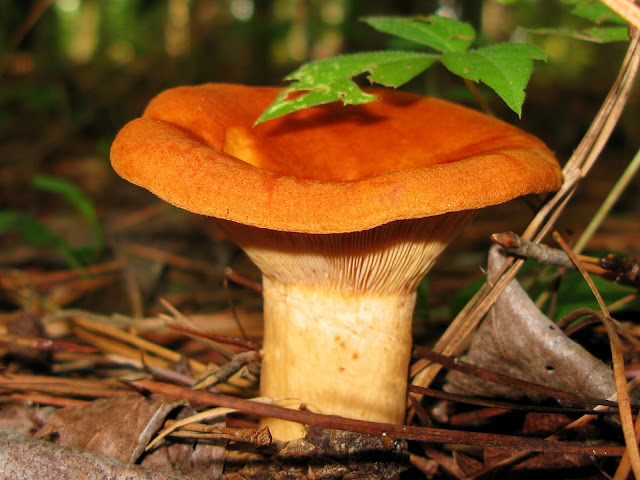 This is followed by the early show-offs who are not afraid to paint themselves red and yellow and then strip away each leaf in a slow seductive dance.  Why does this season seem so short?  Why is it so time-challenged? 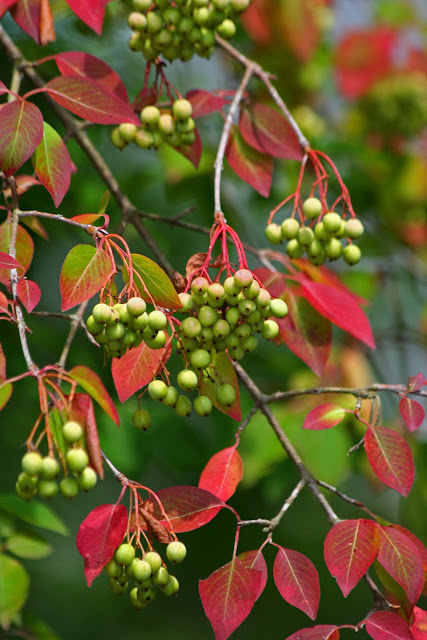 This tree in the photo above that grows down by the water and which my husband calls a 'wildplum' (which is a misnomer I am afraid), is the first to begin the flirtation this month.
Posted by Tabor at 10:18 AM 15 comments: 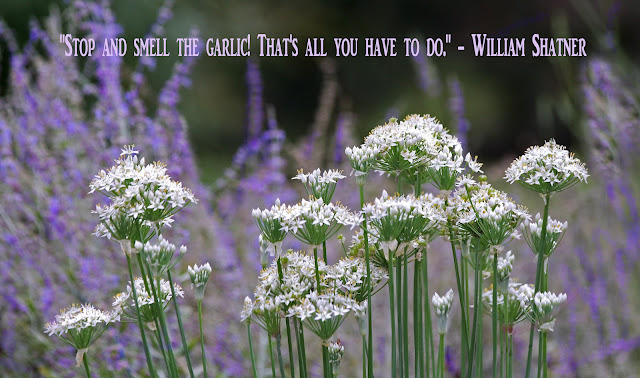