Time to share some seasonal changes in the yard and area around.  Spring is long gone and we have had a week of 92 F degree weather followed by 62F weather and this week it will be 80F degree weather.  It is amazing that my plants can keep up!!
Early summer storms prepare us for dramatic times ahead. 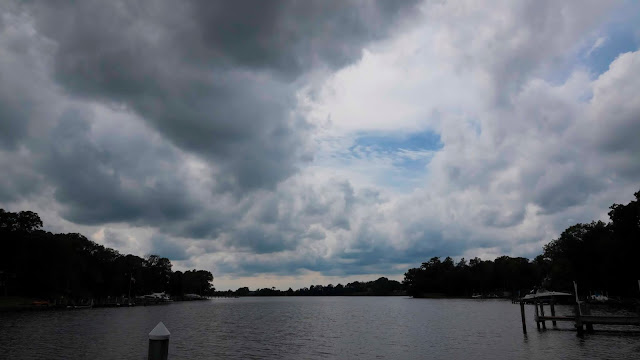 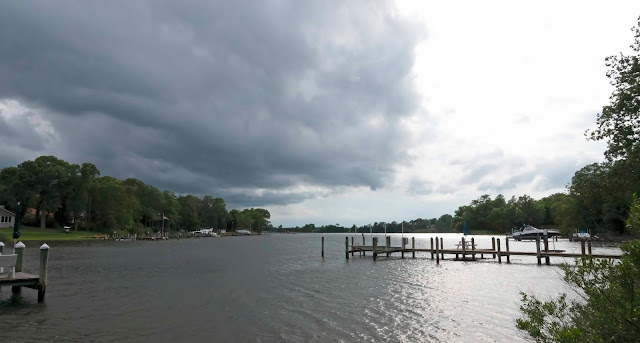 But spring and summer showers bring the flowers, so I am not complaining. 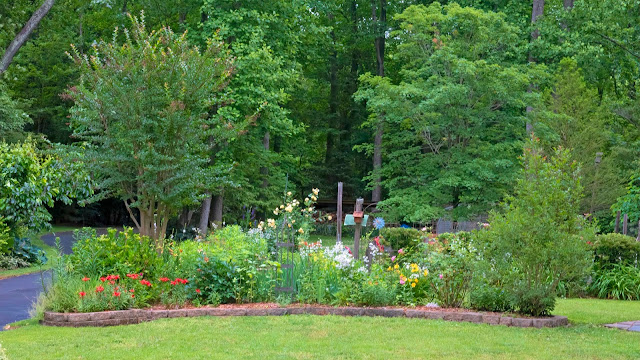 This flower bed is working on full blooms already! 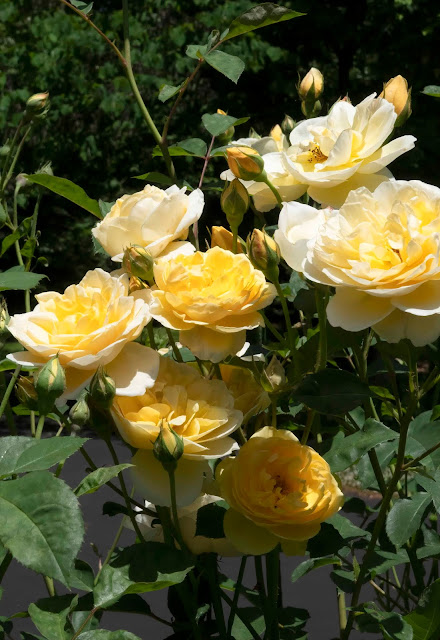 With hurricane season just around the corner, I am enjoying the calmness of these weeks (days) ahead.
As I wander down by the river I notice that the little goslings are getting their adult colors and soon will no longer need such careful watching by the adult geese. 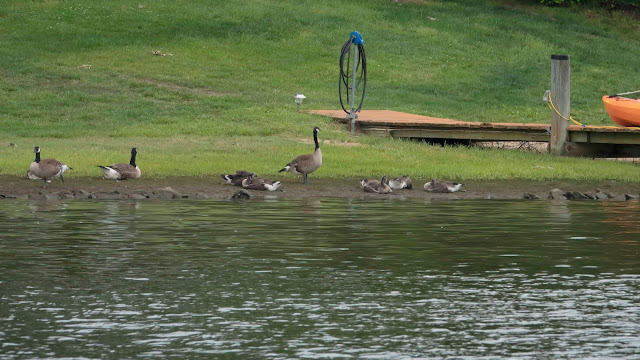 It all 'almost' seems the earth is returning to a pre-COVID routine. It is moving back to the climate change new "normal".
Posted by Tabor at 5:58 AM 13 comments:

I had mentioned that I would provide the saga of the geese that had overtaken the osprey nest this spring.
You will remember ( of course because your lives are not filled with other trivia)  that hubby spent several times a day chasing the geese off the osprey nest using his kayak and paddle.  This was even AFTER the osprey had failed to dive-bomb and scare them off.
Once the mama goose had laid her egg(s) all bets were off and she would not fly away as hubby threatened in a kayak pass.  Once she realized that hubby was all shout and no action she settled down for the long haul.
The osprey would sometimes buzz the nest, but you will remember they had successfully built a small mansion on the sparse branches of the tree across the river.  They are very good nest builders. 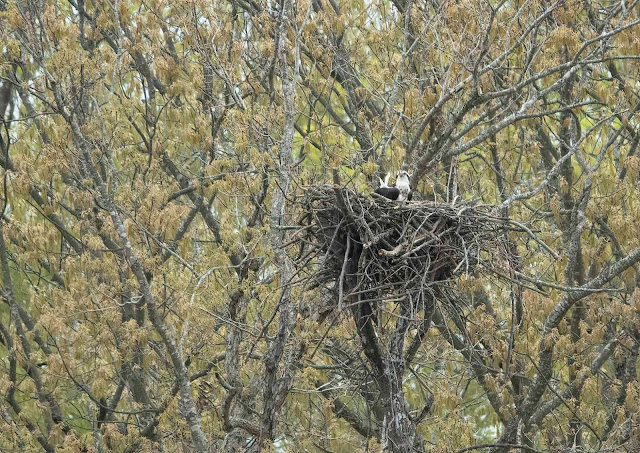 All of us humans (including the neighbors who shook their heads at our futility and loss of faith in osprey nest building) went back to our regular spring activities.
Every once in a while I would hear the geese arguing or calling in fear or pain.  I would look out the window at the nest and not see an owl or osprey or other predator and wondered what was going on.  Every once in a while the gander would peck harshly at his mate and puff out his chest.  Was he angry that she had not laid any eggs? 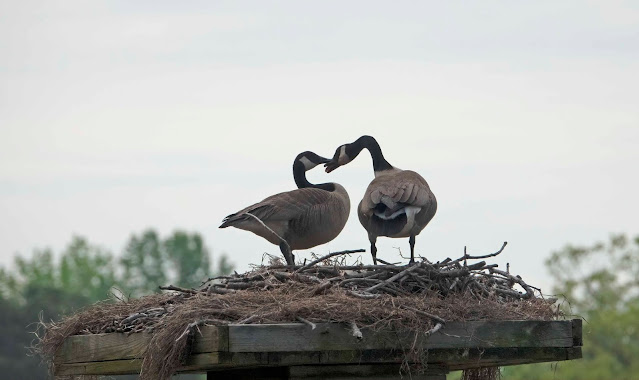 Weeks passed and the geese moved off the nest and sometimes returned and sat on the edge. 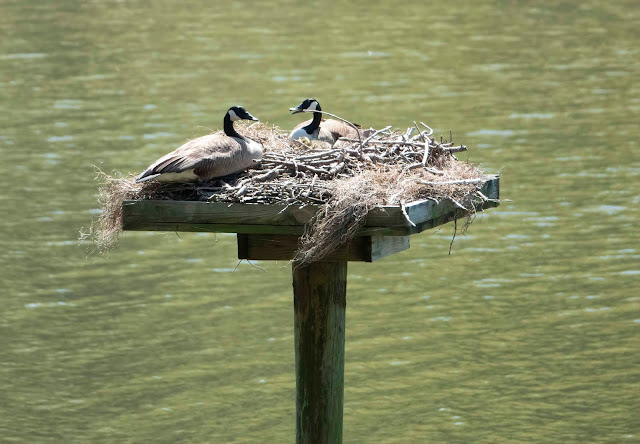 I would sometimes see the nest empty and found them camoflauged in the nearby grassy reeds. 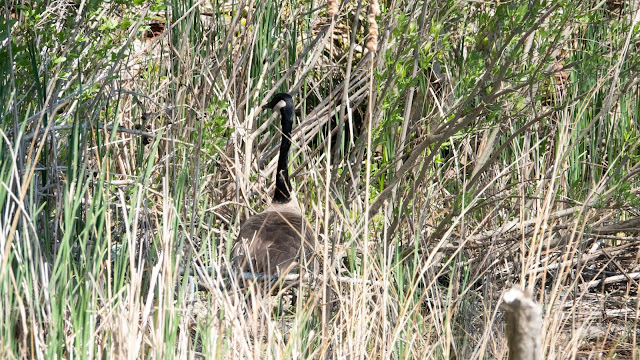 I saw, or think I saw, at least one or perhaps two goslings tripping over the sticks in the nest.  Can you see it as I zoom in?

A day or three or four passed as I got busy and when I looked out the window again maybe a week later,  I saw crows on the nest.  I knew this was not a good omen.  The geese were gone and crows were flipping gosling feathers about. 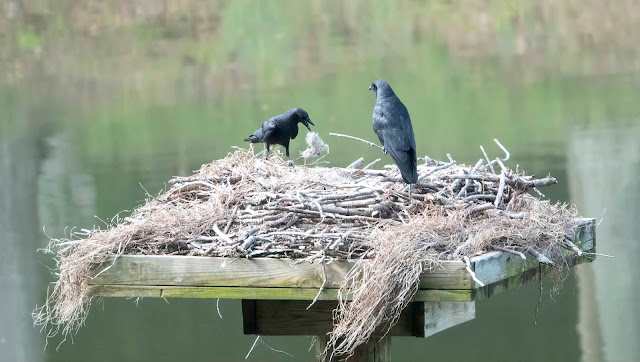 I kept up hope because later I did see a pair of geese with two little ones. 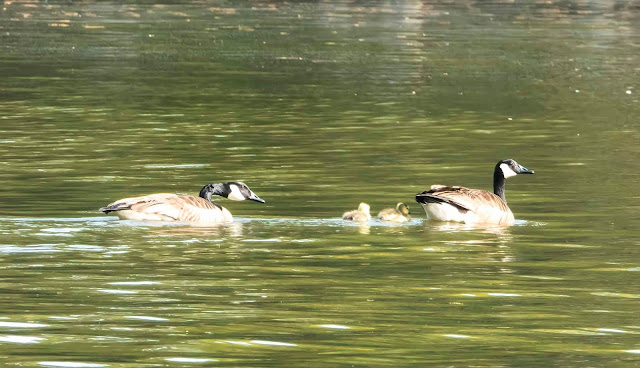 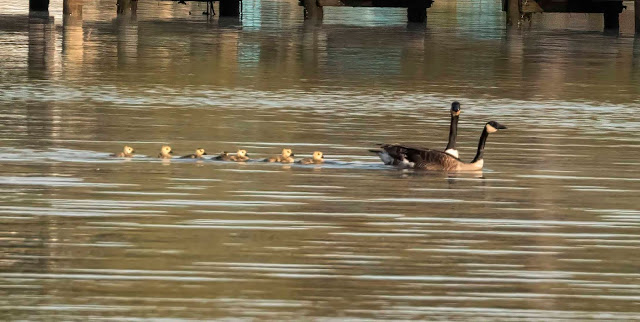 As the season moves into summer the families tend to join up for greater protection... 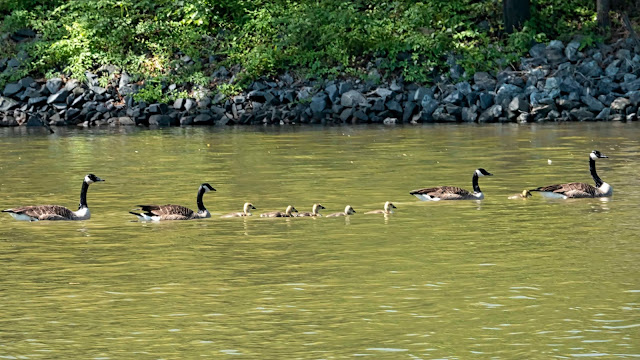 ...and just like human children, they grow faster than weeds. 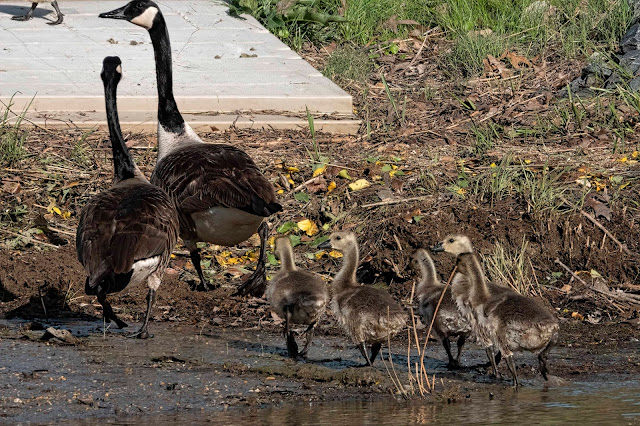 I have not been out to photograph them, but the young ones are getting their adult colors and may be better able to protect themselves.  I will never know if any of these are goslings from the osprey platform, but it gives me no less joy to see them healthy and eating all our algae around the dock.
Posted by Tabor at 10:05 AM 16 comments: