There were just a few other water birds that I found in Mexico which caught my eye but were barely caught by my camera lens.  I was being a good photographer this time in spending more time enjoying and looking at where I was instead of trying to set up shots for the camera! 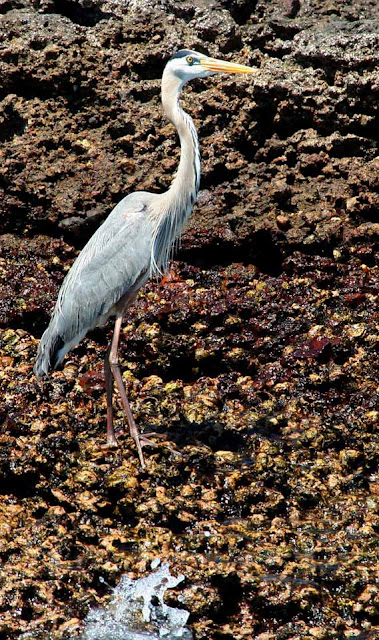 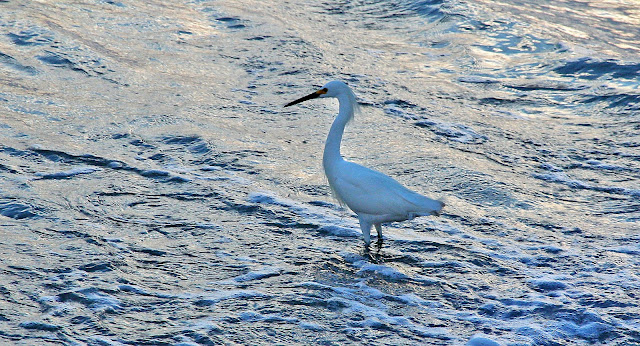 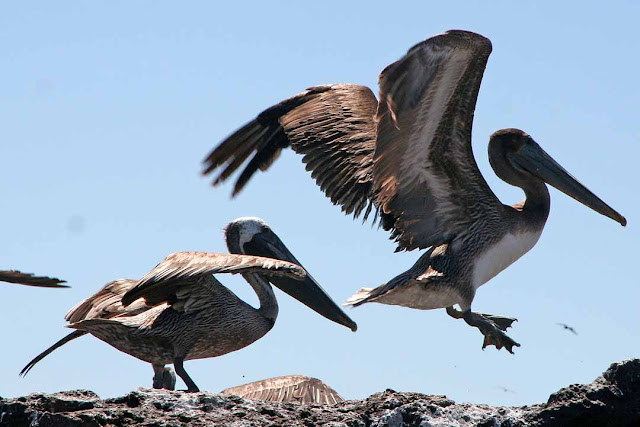 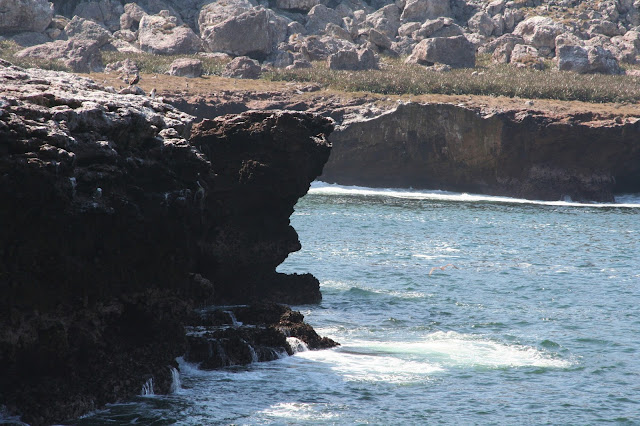 Back to our boating day...we started to circle one of the islands as the guide explained more about the various birds that were sheltered here. 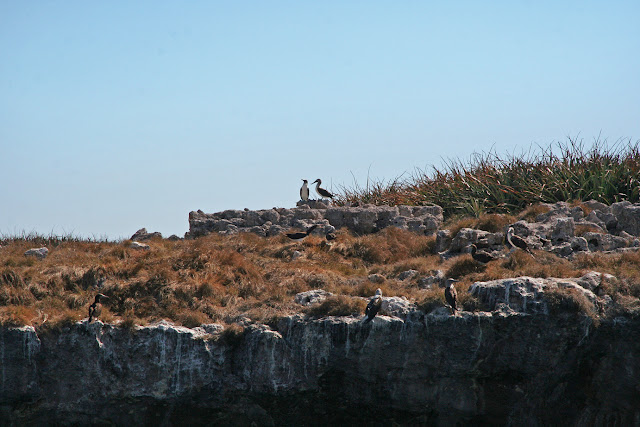 My first site of my rare bird was waiting on the top edge of the island and silhouetted against the blue sky.  I immediately was a snap happy camper. 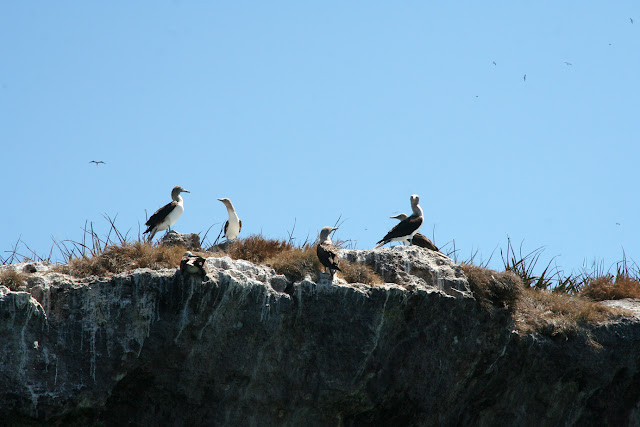 We drew in closer and they watched us carefully as our boat avoided crashing against the rocks.  They seemed to be puffing out their chests and looking condescendingly down on another boatload of gawking overweight tourists. 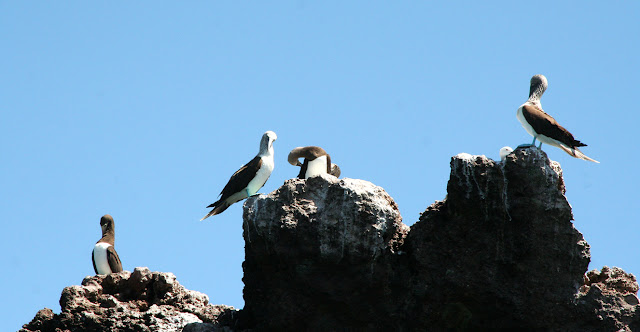 If you look closer and click on the photos below you can see the blue feet of my bucket bird, the rare blue-footed booby.  Below, one has just taken flight.  Be sure to click on the photos for a larger view. They are mixed in with the red billed seagull who is impressive in his own coloring style.  The blue footed booby males lift and plant their blue feet as part of a stylized mating dance which can be seen at the dance link. Since the female only mates with the bluest-footed dude she can find, each new booby generation is assured of having bright blue feet.  They got the “booby” moniker from Spanish explorers, who called them bobos, which means “dummies.” The birds were not afraid of humans and showed no fear. The explorers thought that was unintelligent behavior, because it made the birds an easy catch for dinner.  According to Wiki  "The blue color of the webbed feet in Blue-footed Boobies comes from carotenoid pigments obtained from the diet. The pigments are antioxidants and stimulants for the immune system, so there is a trade-off between immune function and signaling, since any incorporation of the pigments into the feet is a direct detraction from those that could be used for immunity and detoxification."  The color blue must come from blue algae I am guessing.  Scientists have done some experiments with hiding foot color in males and females after mate selection and found some interesting change in both egg size produced and care of young. 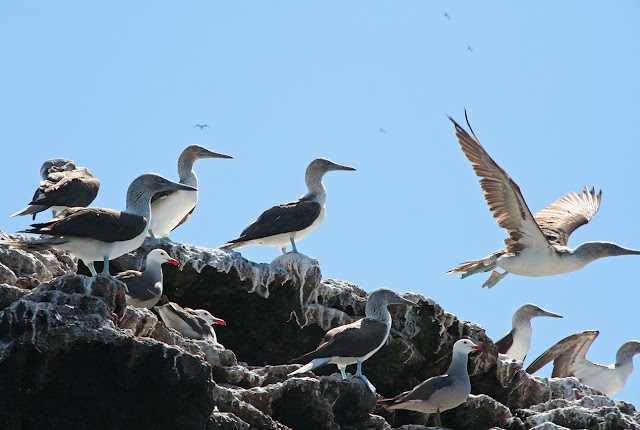 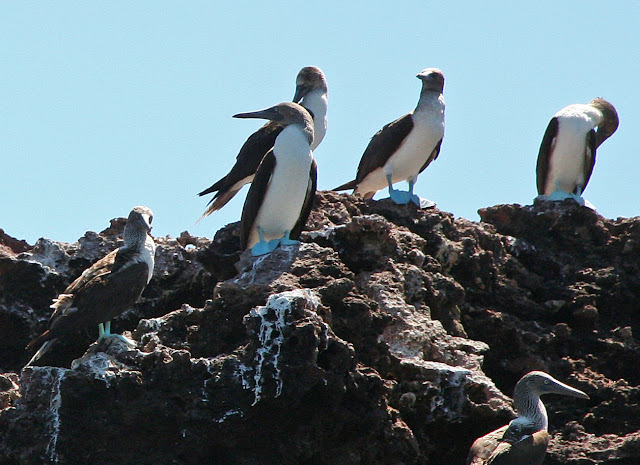 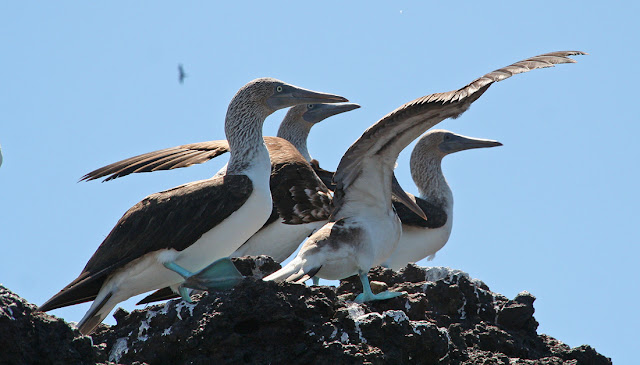 Some days the gods are in a good mood and their bacchanal of the night before has not left them fogged and stubborn.  Instead they bring forth a day that is fresh faced and friendly.  This is a special reward when you are on vacation and the days are numbered. 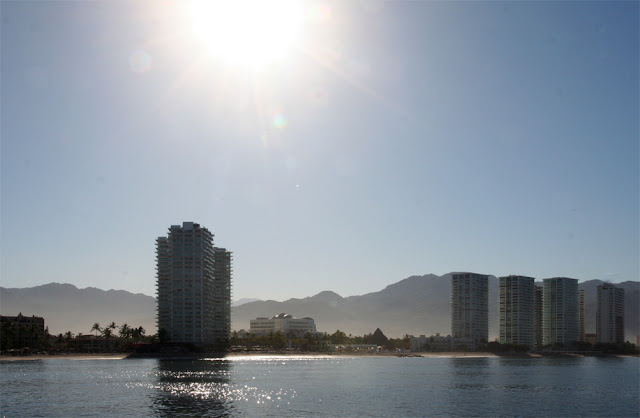 We left early (well actually not so early) one morning on a tour boat out of Puerto Vallarta and even ignored the haze that was a permanent part of the view against the striking mountains and even more evident from the ocean side of the world.  Today was a day of adventure.  We were going to the Marietas Islands of Jacques Cousteau fame. He had visited it once...a long time ago... and the islands are perhaps now not so special because of the thousands of tourists that visit every year and the hundreds that 'ooo' and 'aww' over it every day.  The Mexicans still carefully protect this bird sanctuary from the mass loving that could destroy it.  The name Marietas came from a tale of a lost maiden, Marieta, who had been found on the rocks.

It was a good 45-minute ride over calm seas before we could begin to see the harsh chalky shapes in the distance as the islands are 20 miles from the city.  The three islands are small and sit at the mouth of Banderas Bay which is the largest bay in Mexico. 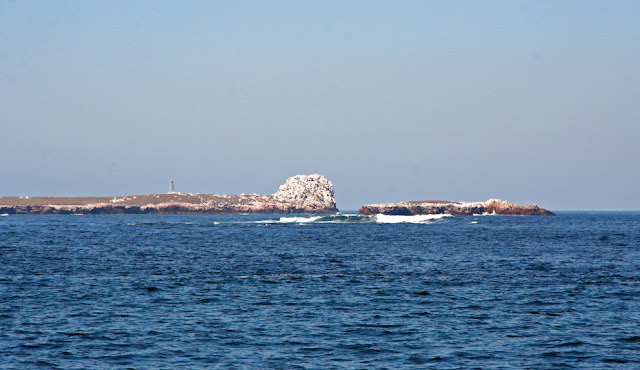 This trip is not worthwhile if you are looking for something soft and lovely and quiet.  The waters were murky and while we saw fish we saw more than our share of green gunk, the ocean was cold, and there were more people than animals! (I have carefully avoided that impression with my photos.)  They market a "mysterious hidden beach" to tourists which is actually small and disappointing.  I was nostalgic for a pre-tourist Mexico that hubby and I might have explored years ago on a private sail boat, but that Mexico was history as were the pirates that had frequented the Tres Marietas so many years ago.  Still I had come with a different agenda and took this boat trip to see a bird that was on my bucket list. 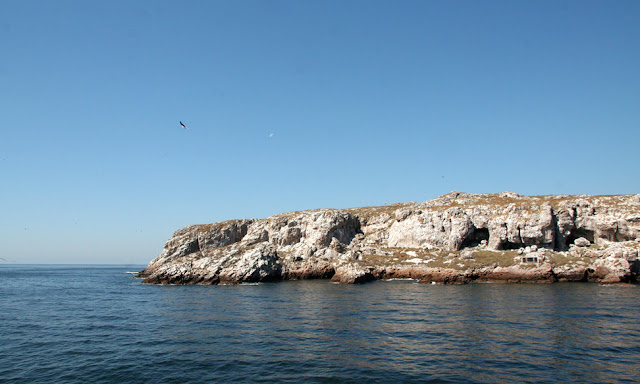 The "fragrance" of birds became stronger as we got closer to the sanctuary.  Fortunately. the surge of waves was manageable for both boat and swimmer. 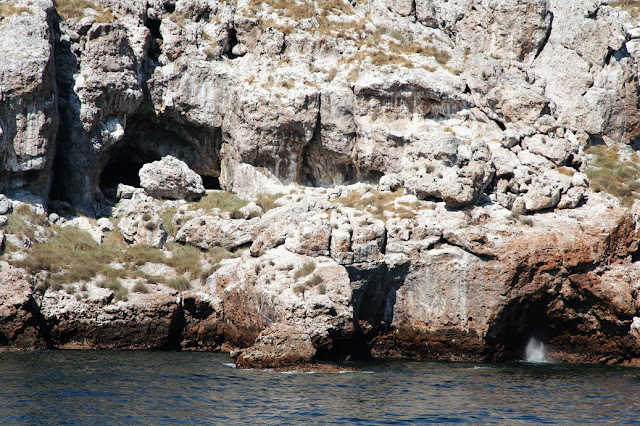 Caves large and small revealed how the ocean was slowly wearing away at these rocks formed so long ago by volcanic activity.  Most of the caves have been caused by bombing and explosives years ago before an international outcry made the islands protected.   While we were able to swim to the beach we were not allowed on any other part of the island.  The Mexican guides were very knowledgeable  and careful  in protecting both tourists and the islands. 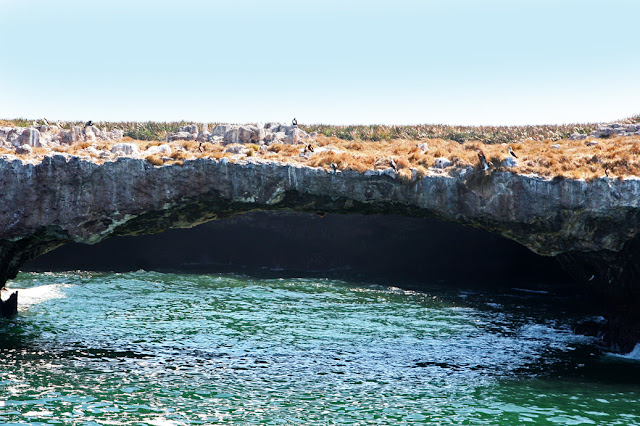 As we got closer to the lee side and you can see the birds dotting the rock outcroppings.  The next post is on my "bucket bird."
Posted by Tabor at 5:31 AM 11 comments:

A Whale of a Story

I must admit that I have had prior opportunities to view whales and passed because I easily get sea-sick and Dramamine makes me very sleepy.  I threw caution to the wind on this trip and took the big D, did NOT get sleepy, and did NOT get seasick.

We saw humpbacks...the ones that blow bubbles under the herring to make them rise to the surface in a tiny group and then the whales can have dinner!  They also sing lovely haunting songs...which as I am sure you have read is probably the basis of the mythology behind sex-starved sailors and mermaid songs.  Quick stats so that you can appreciate my poor photos where I decided not to bring a telephoto on the boat...big regret, although there was really no safe place to store my camera bag once we went snorkeling, safe from the elements was my concern not theft.  They can be up to 50 feet in length, weigh 50 tons, filter small plankton along with small fishes such as herring, they are usually near the ocean surface and thus the easiest to photograph.

Before you scroll below, let me tell you of an adventure my husband had while SCUBA diving doing graduate work in Hawaii.  He was counting organism settlement on the underside of large concrete pipes that had been placed as a substrate for an artificial reef in about 40-50 feet of water.  While down there he heard the most awful sound...like a giant barn door squeaking open and closed...and the reverberation within the pipe made it more terrifying in sound.  He stopped his counting, stopped his breathing in the regulator, and peaked out the mouth of the large pipe.  There just a few yards away was a whale just singing along as if hubby was no where near.  I think my wet suit would have needed careful cleaning if that had happened to me.

Photos below are not good (I know I say that and you get upset...but REALLY they are not great) but pretend you are sitting on the bow deck and taking photos.  Photo number four with the city in the background is of a mom and her calf and the mist of a spray. 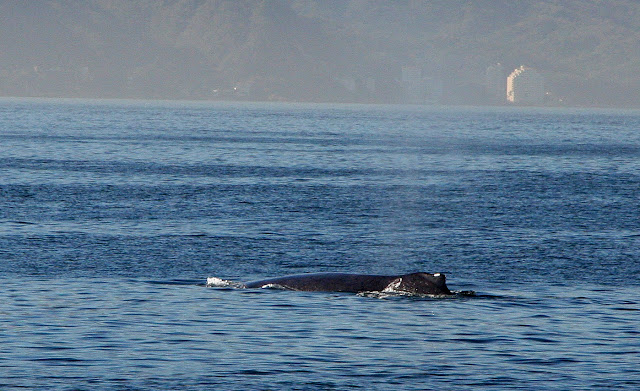 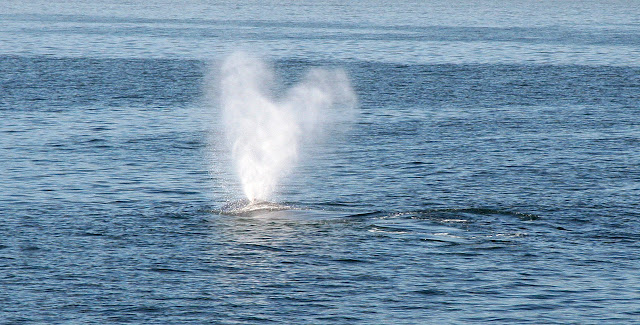 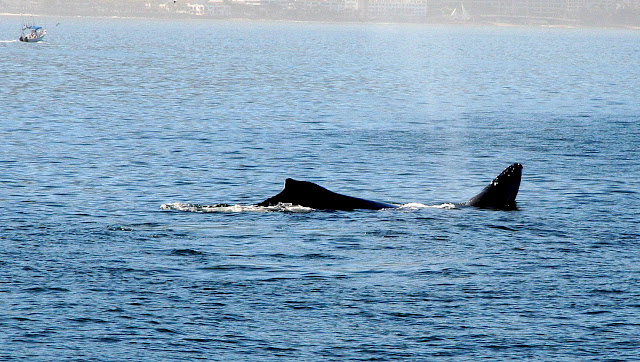 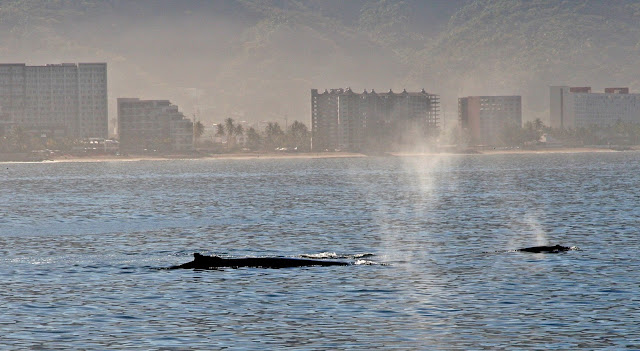 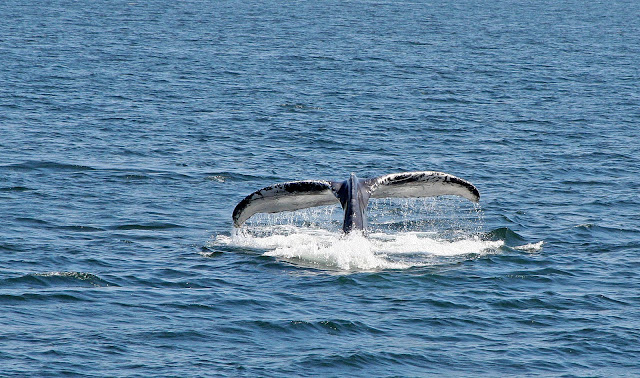 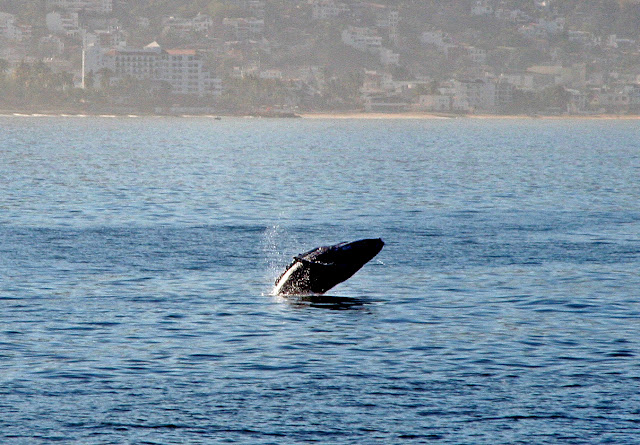 Snipe, curlew, dowitcher...this is one of the sandpipers, but I am not expert enough to clarify.  I had fun watching him along the Pacific beach in Mexico.  He would probe with his long bill until several inches below the sand he would find something to eat. 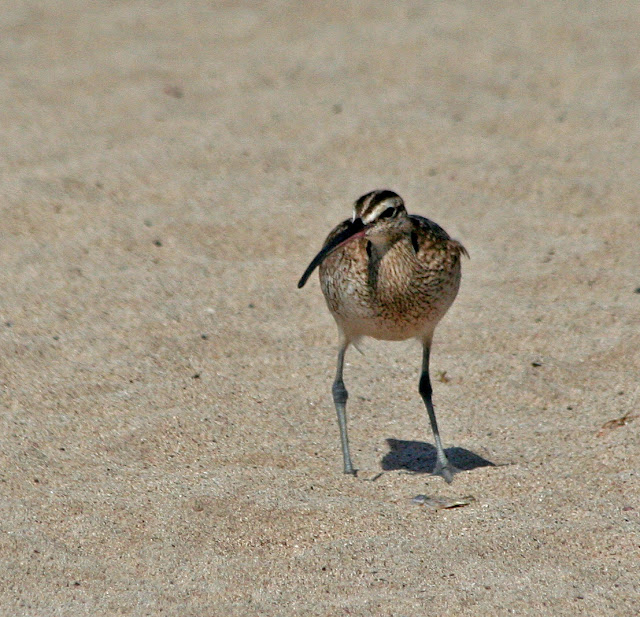 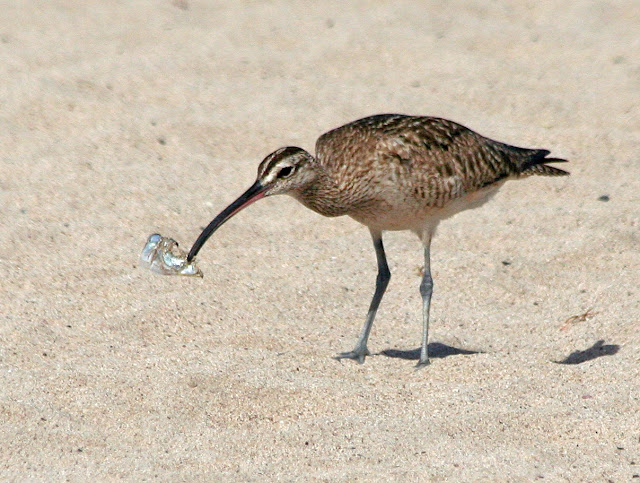 I am not sure what he has here since it looks just like a fish scale or piece of crustacean shell, but he must think it is worth something  until... 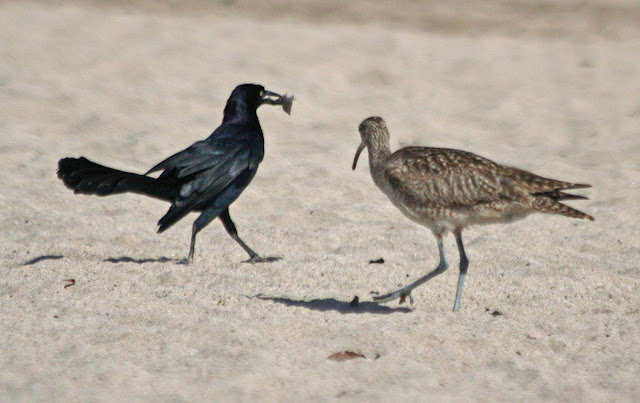 ...this paddle-tailed crackle comes along dressed smartly in his black tuxedo and snatches it right out of his mouth.  The sandpiper looks forlorn but does not seem willing to argue.  I think this kind of dance goes on for some time until the grackle feels well-feed and the sandpiper can fish for himself again! 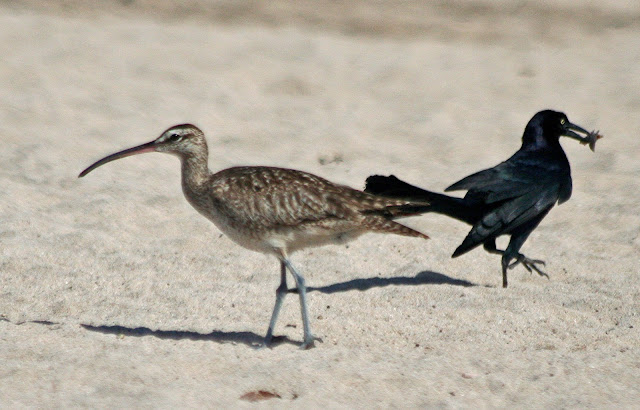 There are eight living species of this odd gangley bird. Half of the species nest on the ground and the other half nest in trees. They have been around for 30 million years. I think these below are brown pelicans. They can soar up to 10,000 feet (with up to a 6.5 foot wing span) and usually fly in colonies. Like many water birds when you see them moving their bills over their backsides they are preening to release oil from glands to improve waterproofing of their feathers. They are monogamous and can live up to 25 years in the wild, longer in captivity. They eat mostly fish but have been seen eating other birds, reptiles. crustaceans and even small dogs. (Hide that chihuahua!) In mythology the pelican could be found on funeral walls to ward off snakes and provide a safe passage to the underworld for the dead. My photos are not great...shooting into the sun...but I did not have a say in where I was moving!  You may ask if I could smell it in the last photo and I must admit...yes. 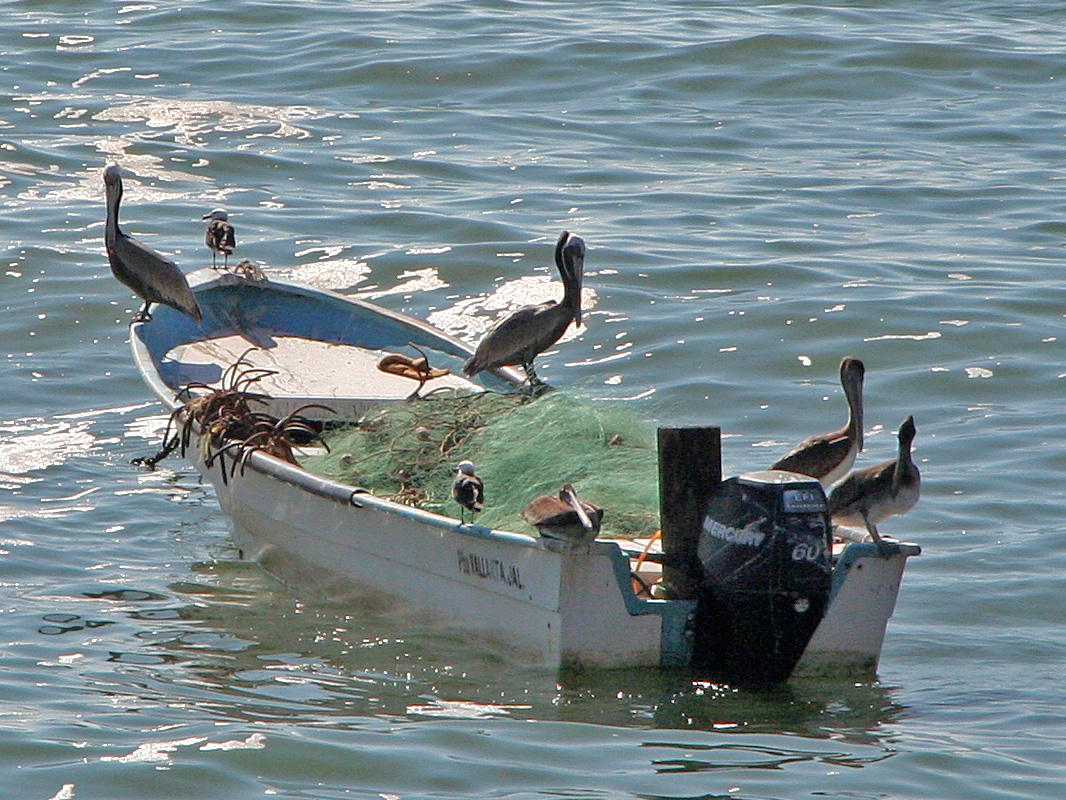 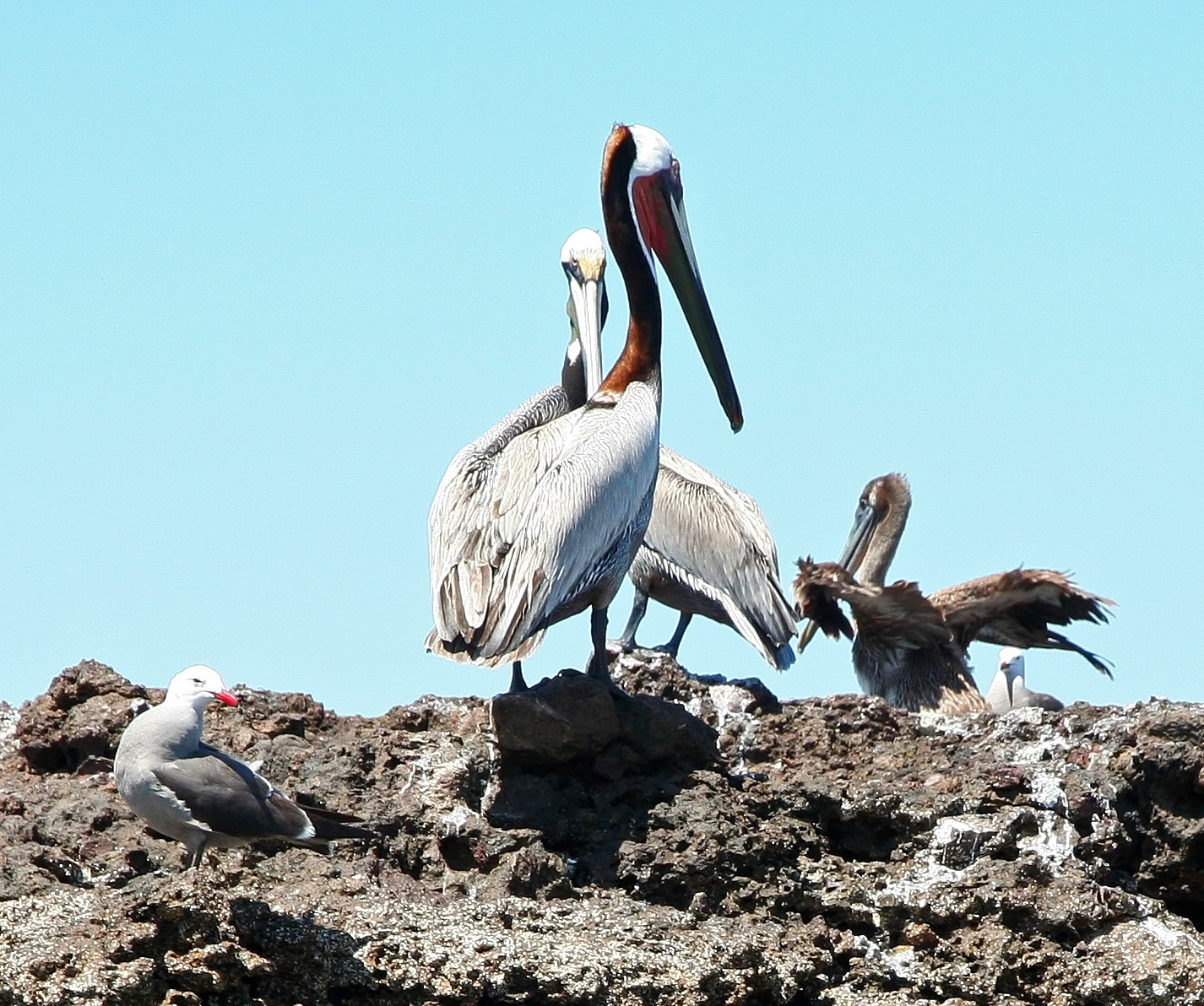 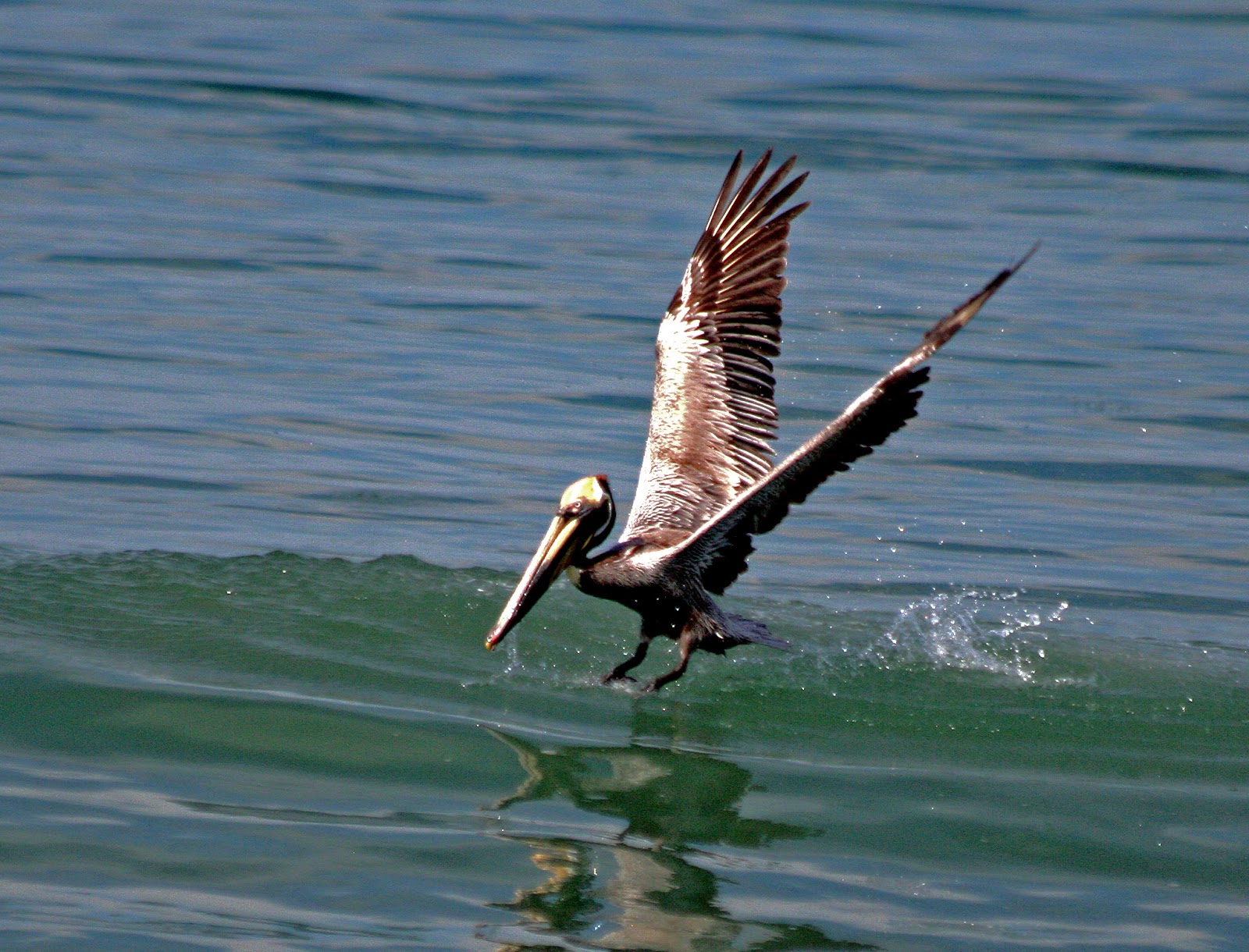 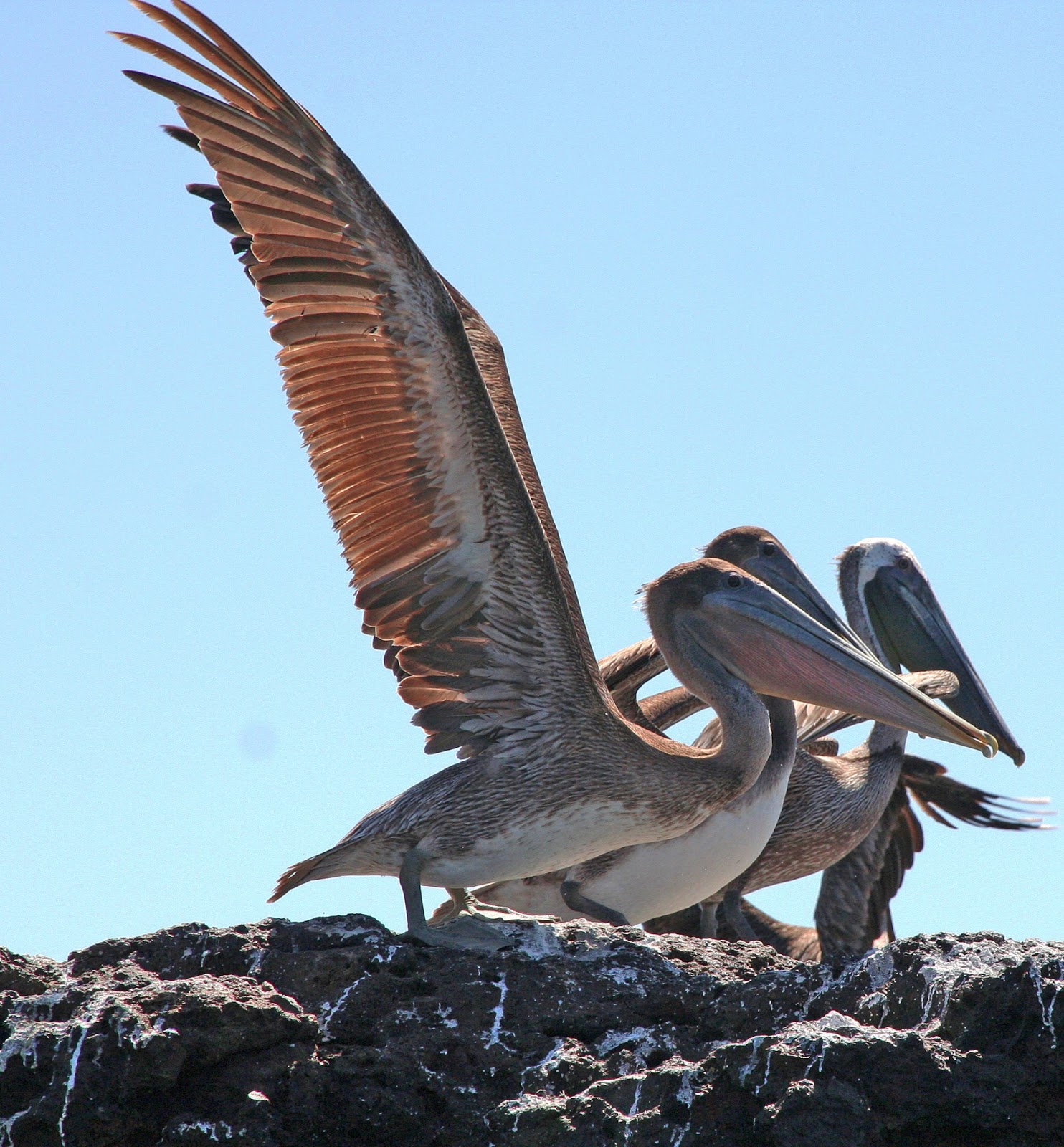