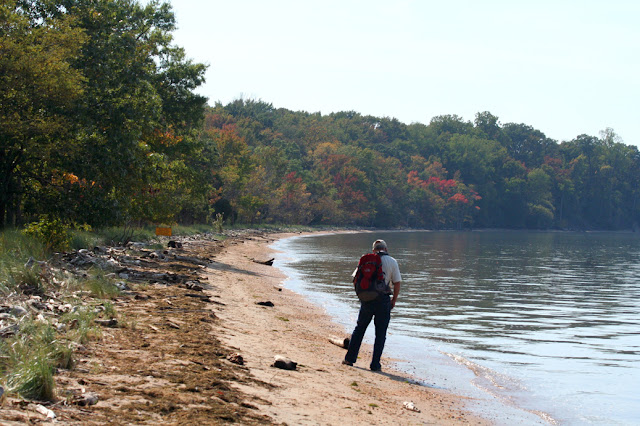 On a fall day in early October we took a drive and hike to the bald eagle preserve that is a short drive from our home.  There were no eagles to be seen as many of them are starting to migrate south, and also, during the months when the eagles nest and rest here the preserve is closed to hikers.


We just enjoyed the last of the warm weather sun on our shoulders, the beginning color in the leaves, and were impressed by the very large number of acorns (from all varieties of oak trees) falling through the papery leaves and crashing to the ground at our feet missing our heads by a breath.  The squirrels and deer will be fat this winter and perhaps the woods will be thicker in years to come.  Perhaps this abundance of nuts was due to the long drought in July or the heavy rains in early September or maybe it is an annual dance rhythm of nature.


Hubby in the photo above is pondering the land at his feet for colored stones.  Something his grandchildren taught him to do this summer.  I smile at this, because a decade ago this would have been a big waste of time for him as he was a dedicated one for keeping the engines revved all the time. 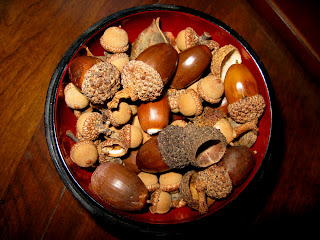 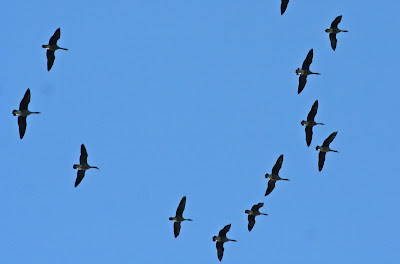 I heard the call of the wild the other afternoon. They have that 'Hoorah' thing going this time of year, and like a military brass band they march across the blue October sky with precision.  They are like old friends returning with their tall tales of life in the ponds of Canada this past summer, tales of making love, raising well-behaved little ones, eating lots of good aquatic grasses, flying high over the prairies, and avoiding deathly two legged and 4 legged dangers, and now they 'hoorah' because they can party like single adults once again.
Posted by Tabor at 7:41 AM 19 comments:

While watching the sun scatter its warm fall kisses across the water, across the saltbush feathery seeds and against the underside of the golden tulip tree leaves high against the blue sky, I looked up just over my head and saw this beautiful example of reproduction hanging in the green fall air.  What a nice offering for a fall necklace! 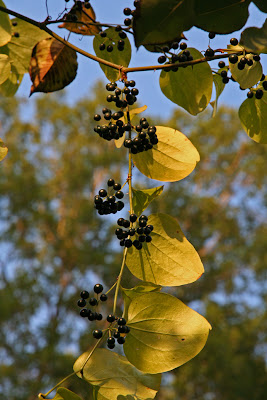 The berries are a deep, dark purple and the leaves had lost their intense green of summer and much of their waxy gloss.  These berries are eaten in the winter by many types of birds and animals including my little waxwings, woodpecker, and raccoons.  This was the noxious greenbriar that I wrote about this summer and which I try to eradicate near any paths.  This one has its feet planted about 12 feet from my dock deep into the trees but has stretched itself over a wild bush just to reach me.


I am glad that I did not remove it all even though it bites like a bee!

I was happy see a few of the larger animals on our Canadian adventure. They were not too far off the roadways or hiking trails, and thus, the challenge in getting a good photo was not totally impossible.  I just had to remember to charge the batteries and allow the autofocus to work...I am learning slowly but surely.

Doesn't this planet just take your breath away sometimes?
Posted by Tabor at 7:43 AM 14 comments:

Larix...Not to Be Confused with Dr. Seuss's Lorax

According to the highly respected Encyclopedia Britannica (you remember what an encyclopedia is...don't you?) the larch is any of 10 to 12 species of coniferous trees of the genus Larix. One species is found only in the Himalayas.  Another is known to grow in Siberia.  It is a plant that, like a monk, seems to need and want the simplest of life styles.  The most widely distributed North American species is the tamarack, hackmatack or eastern larch.  But the Pacific northwest is home to the western larch L. occidentalis which I think was the one I saw planting it roots so firmly in the harsh mountain limestone just at timberline in the Canadian Rockies.  See the golden sprays that look like aspen, and glow in the gentle sun above the evergreens in the photo below?  They cling to the mountain rim with such tenacious life and delicate beauty. 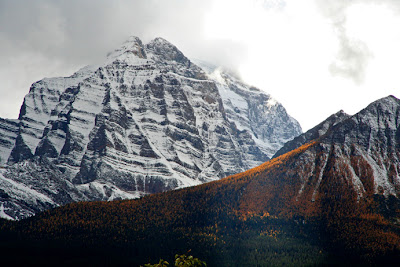 This tree is so unusual because it looks like a conifer and has needles and cones like a conifer, but changes color in the fall and drops its needles like a deciduous tree.  It also is unusual in that the needles are soft as kittens' whiskers when you touch them.  If you want to see this fantastic tree, you must pay your penance by hiking up the mountain past mud, grizzlies and snow into the thin and biting mountain air.  Since you may not want to do that, I will post a few of the beautiful rewarding trees I saw on my hike in their bronze fall glory. 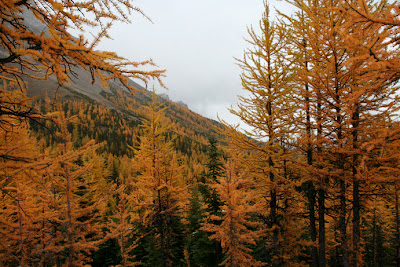 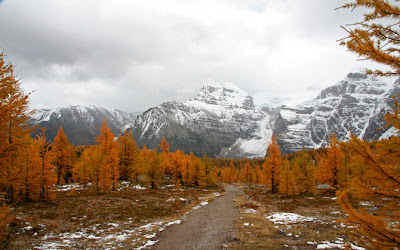 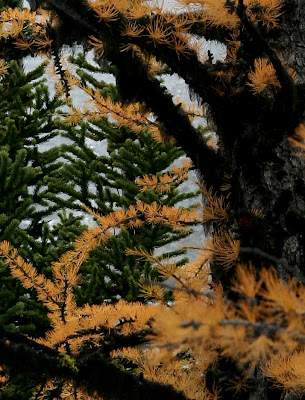 It is no surprise that they inspire poetry from great poets.


Asides
Though the season's begun to speak
Its long sentences of darkness,
The upswept boughs of the larch
Bristle with gold for a week,
And then there is only the willow
To make bright interjection,
Its drooping branches decked
With thin leaves, curved and yellow,
Till winter, loosening these
With a first flurry and bluster,
Shall scatter across the snow-crust
Their dropped parentheses.
by Richard Wilber
Posted by Tabor at 7:00 AM 10 comments:

I did write that we had four seasons.  Some people dread the cold and gray of winter, dislike the stark contrasts and the biting air and the lack of warm colors.  Canadians see it as a time to be outdoors even more. They ski, snowshoe, hike, skate and slush cross country to their heart's content. The anticipation of the arrival of winter was almost palpable at the Canmore Nordic Center where the Olympians train when we drove by.  I saw athletes racing with in-line skates and ski poles up the sides of paved roads and up paved sidewalks.  Get out your woolies and make some hot chocolate, because I am bringing you a virtual winter that we encountered as we climbed higher...winter just a little early...below.

East of Calgary is the high desert known as the Badlands. It is very similar to our U.S. desert with dramatic erosion, colored soils, rare minerals and those spooky Halloween hoodoos. While traveling in the Badlands east of Calgary I was most focused on finding the famous hoodoos. These are geological features where the softer earth has been eroded leaving a cap of harder rock at the top of the column which does not erode so rapidly and thus protects the remaining column of sandy earth below. The result is a strange formation giving a static picture of earth's time.  Below are photos of some of those haunting hoodoos. 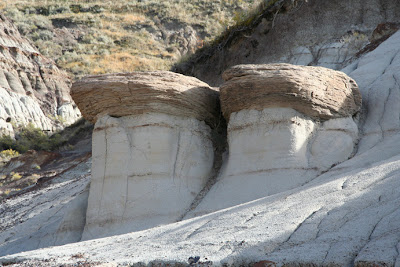 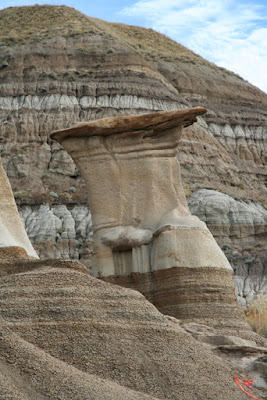 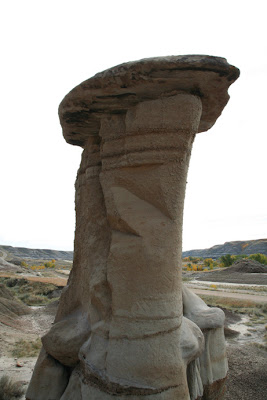 Daddy hoodoo looking at the big screen TV in the bar across the road.

This post is for Joyful Reflections who spends a good part of her life with her husband chasing waterfalls in the Southern U.S.  This post is also for all others who find waterfalls intriguing, frightening, awe inspiring, and breathtaking.  This is for those who are amazed that rushing water can wear away entire mountains with patience and tenacity in the blink of an eon and create a dashing river on the plains, for those who can watch forever dancing water falling happily and relentlessly to the sea, and for those of us who worry about what this will mean when this all comes to a terrifying end as the glaciers melt.

There are hundreds (thousands?) of waterfalls in Canada. In the east the most famous is Niagara, of course. In the west, Canadian Rockies have many junior cousins just as interesting.  For those of you content to live vicariously through my blog, make some tea and then listen to the water splashing, roaring and laughing in Canada in the photos below.  (No I did not set the camera to stop-blur the water...should really do that sometime.   And I didn't keep track of the names except for Troll falls...which I failed to show below!) 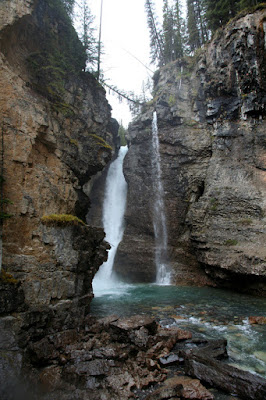 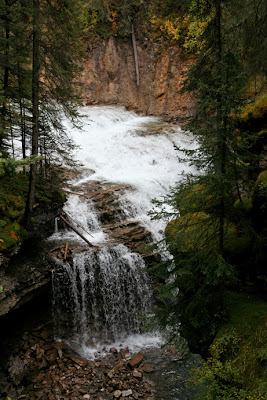 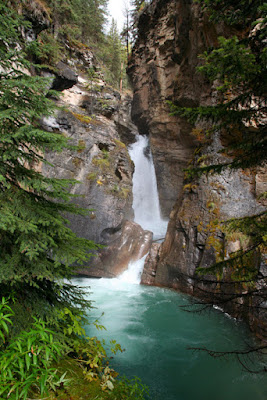 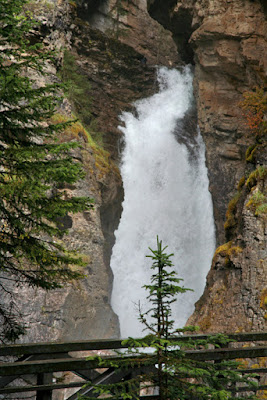 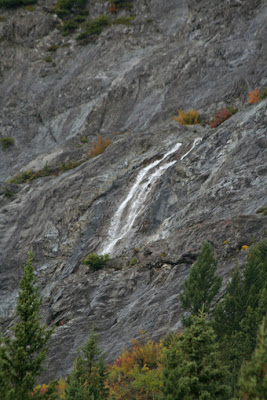 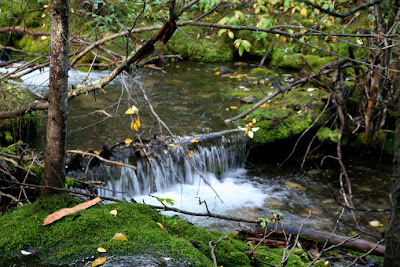 We were smart to pack a large wardrobe of layers as we entered the magical land of the Canadian Rockies to the west and Canadian Badlands to the east. We encountered all four seasons during our 10-day stay and not necessarily in any logical order and sometimes two or three seasons in one day.  Below are fall, spring, summer and winter. 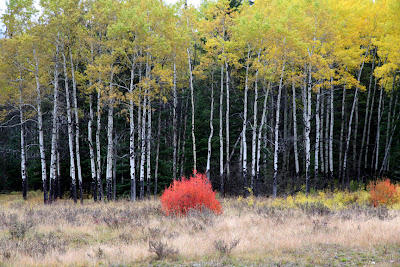 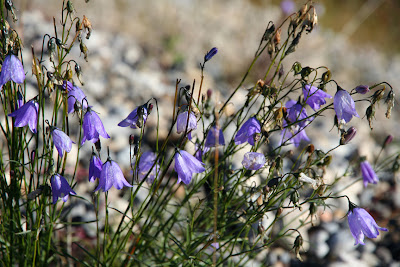 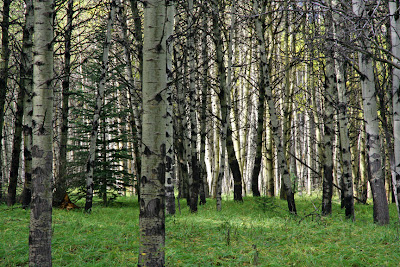 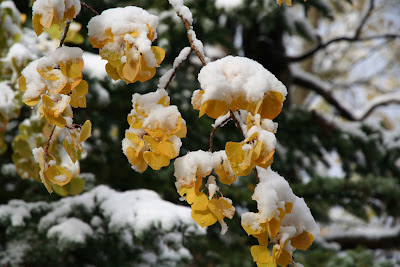 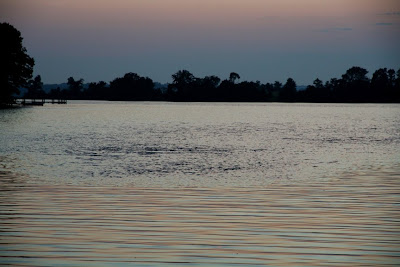 Each evening in late September while sitting at the dock waiting for the sun to set, this migration takes place. This wall of moving water, that ripples the surface, is made by large schools of menhaden that move into the protection of our finger of the river to shelter for the night. These fish are about four to 6 inches in length as they school, hoping to evade bluefish, stripers and other predatory fish, that can still follow them here. Menhaden is considered the second most important harvested species for oil and protein for commercial fishermen on our planet.  The catch is often fed to livestock which we eventually eat.  Menhaden abundance is essential to the ecology of this earth as they provide food for many wild species as well. 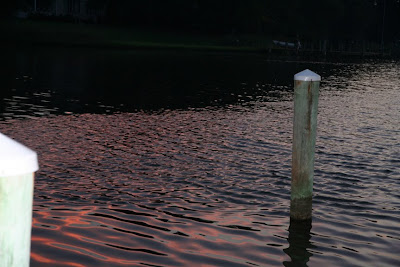 As I sit quietly letting the purple evening shadows wrap up the day, these little fellows will glisten like flashes of  silver foil as they flip just beneath the surface of the water weaving so gracefully past the dock. I can also hear their tails flap as they break the water's surface and it sounds like gentle popcorn snapping everywhere in the quiet air.  Fall is when they are beginning to sort themselves out to form large schools by size and organize for their migration south before the water becomes too cold. 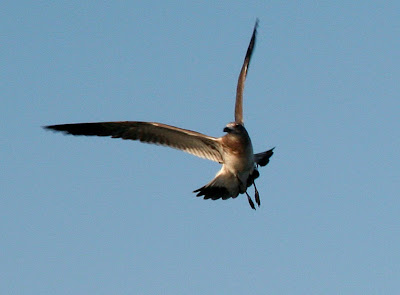 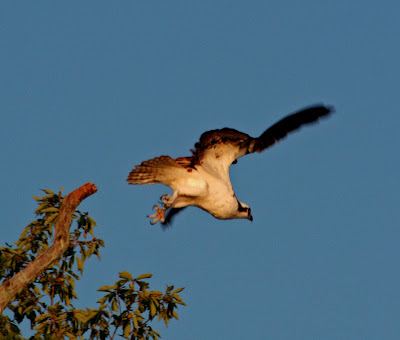 This fall gathering also provides an abundance of easy food for the predatory birds such as the osprey and gulls that laugh and cry and whistle their way against the peach-blue skies in the still evening air and grab the surface of the water for the last meal of the day.  Tummies full they then glide home into the setting sun. 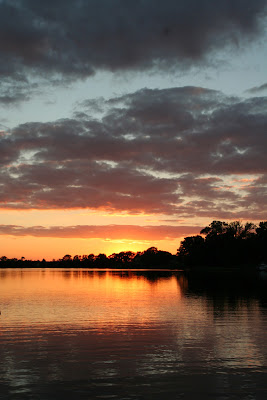 Fall is sometimes the busiest time of the year.  ( I am surprised upon my return from Canada that this is indeed a fall as I know it...but not really fall...the mornings have frost there and the leaves are falling!  Here the mornings are still warm enough to enjoy.)
Posted by Tabor at 7:41 AM 10 comments: