Packing for a trip and when I do that it tends to keep the creative director of my mind in hiding.  She is like a cat/dog hiding under the bed when the suitcases are brought out. But she will get over it once I am sitting in the car and gazing out the window and unable to have access to my laptop.   Then she will flood my mind with all the ideas she came up with while playing with the dust bunnies.  Here, instead, is last night's sunset as I clean out all the files from my photo chip and pack my cameras. (I now have two as I got a new one for Christmas!) 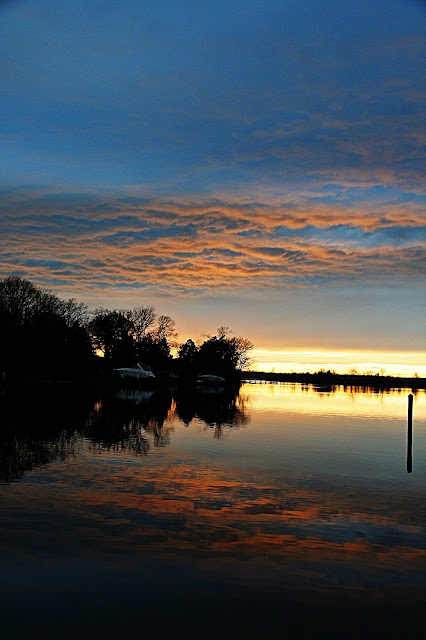 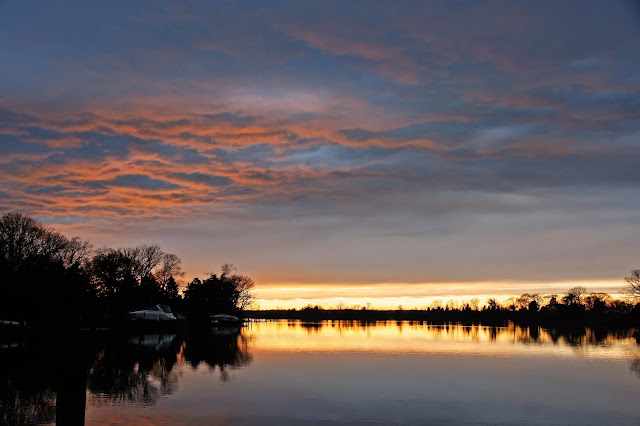 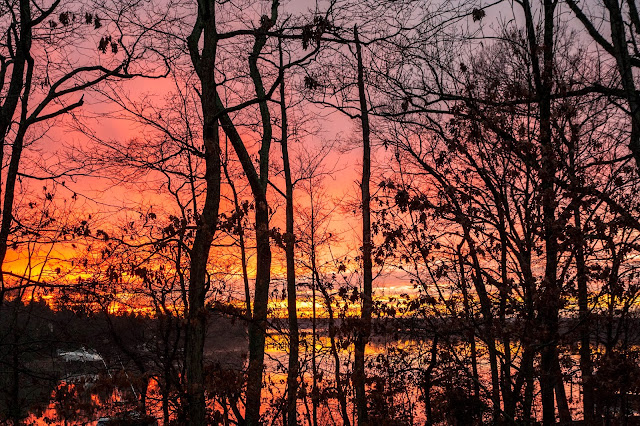 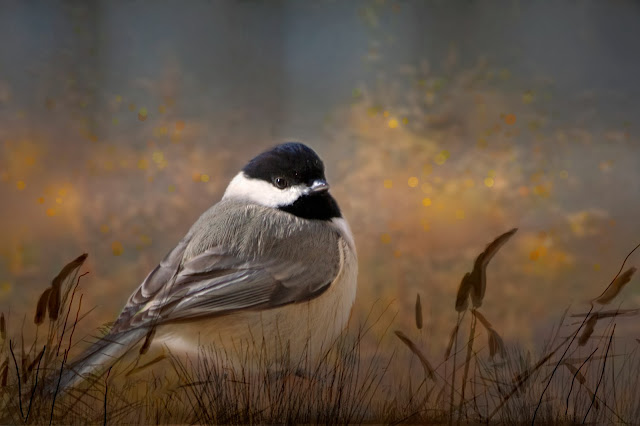 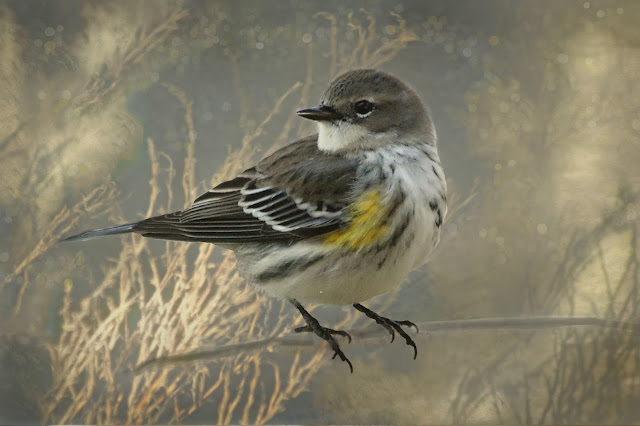 I am absolutely bored from being indoors due to rain!! So spending long afternoons at the computer.
Posted by Tabor at 7:15 AM 14 comments:

Meanwhile, back at the watercooler.

Yes, readers, it is that time of year again, when the elderly confine themselves to the safety and warmth of the house because they have no real life and fill the morning hours by taking photos of the birds at the bird-feeder through their windows leading to a blurry technique and not so funny captions.  Bear with me until better weather. 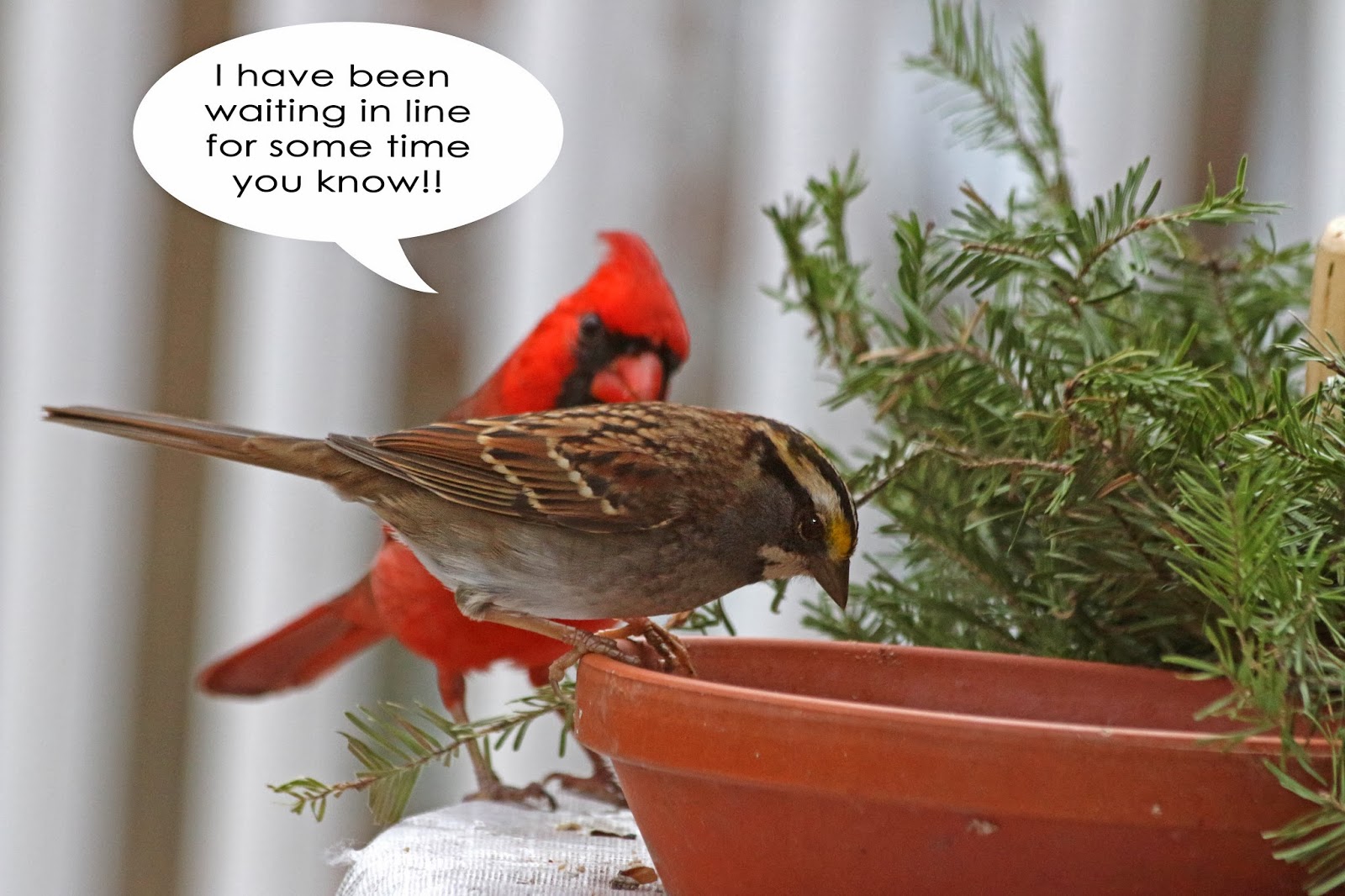 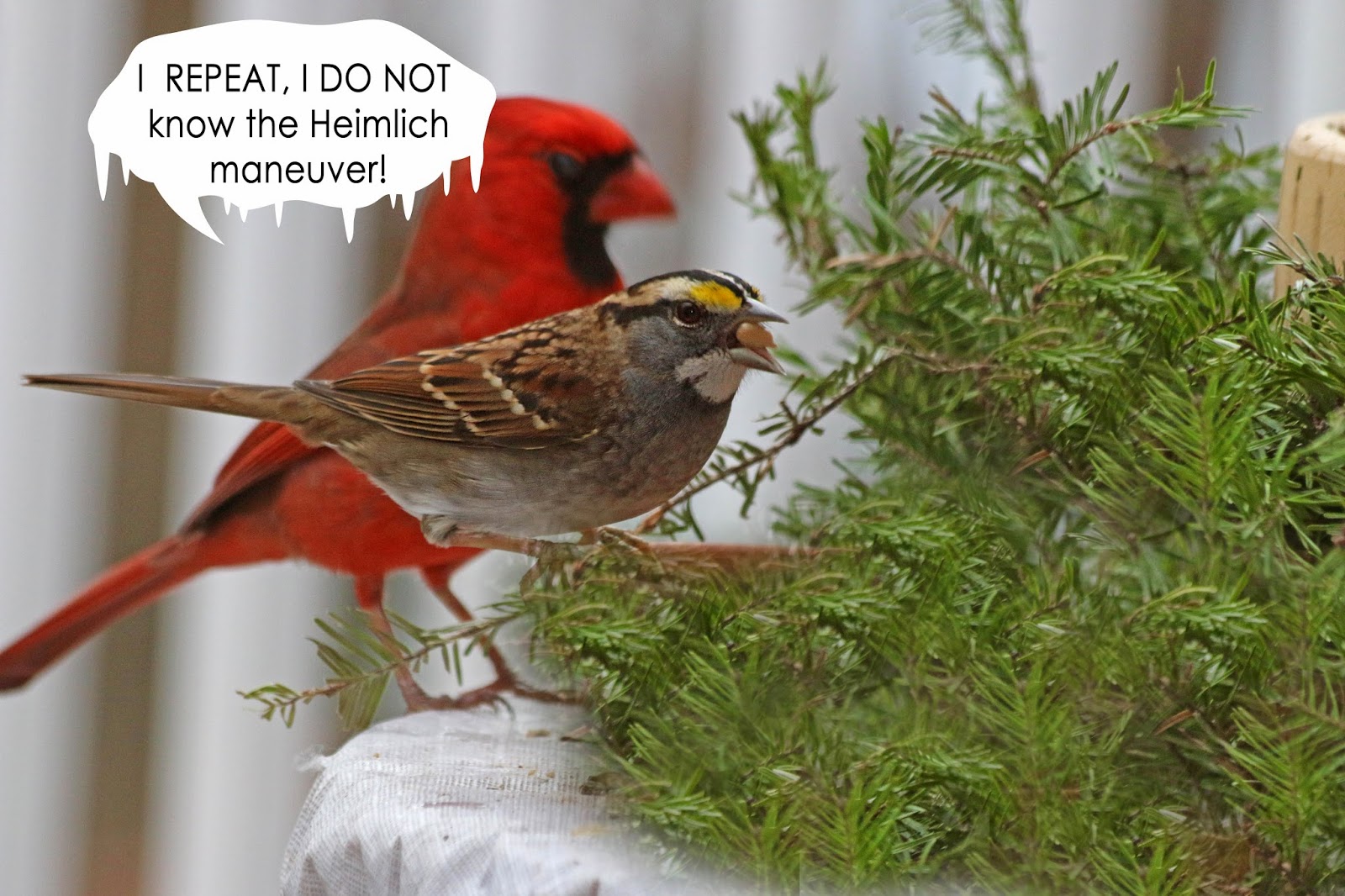 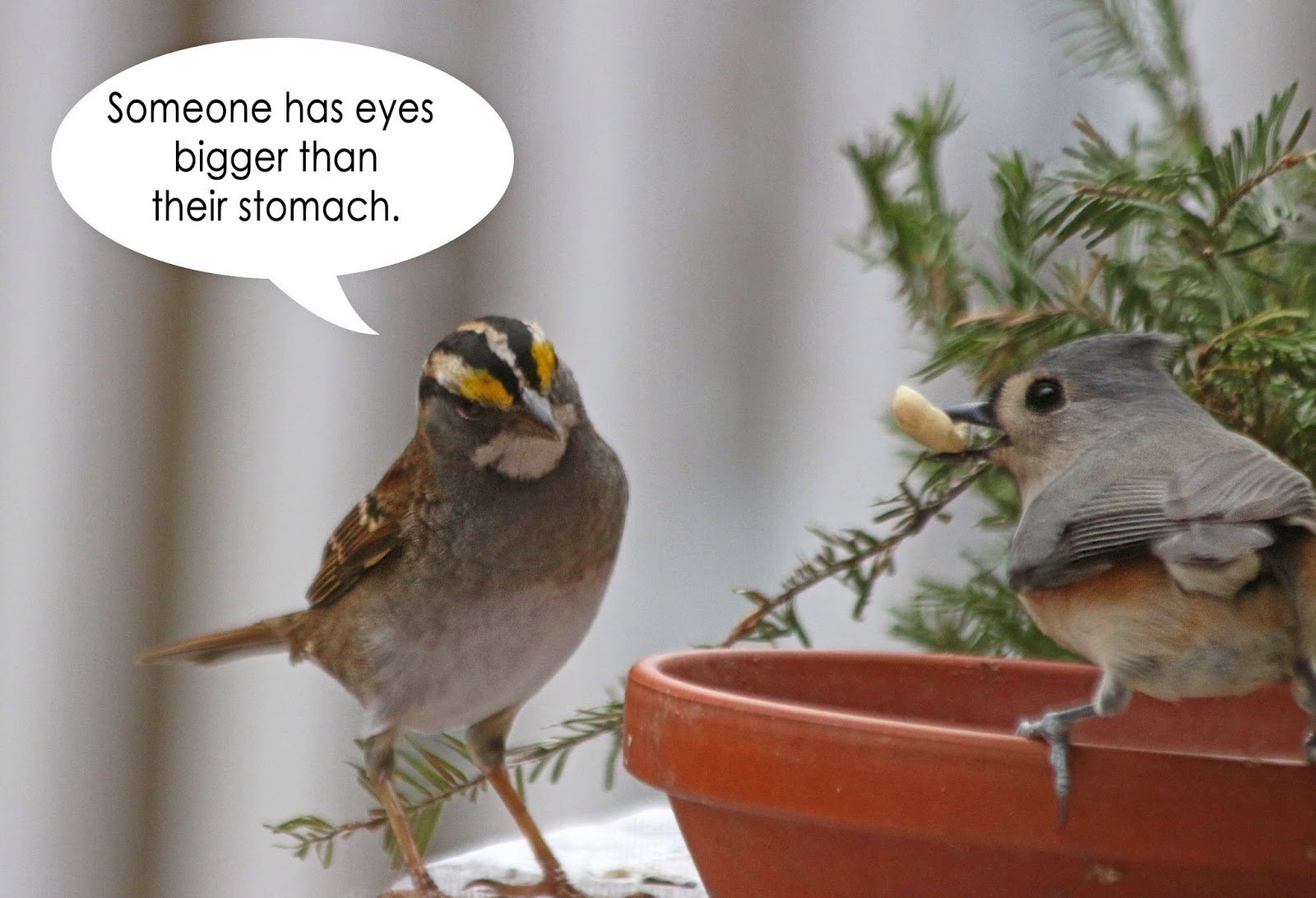 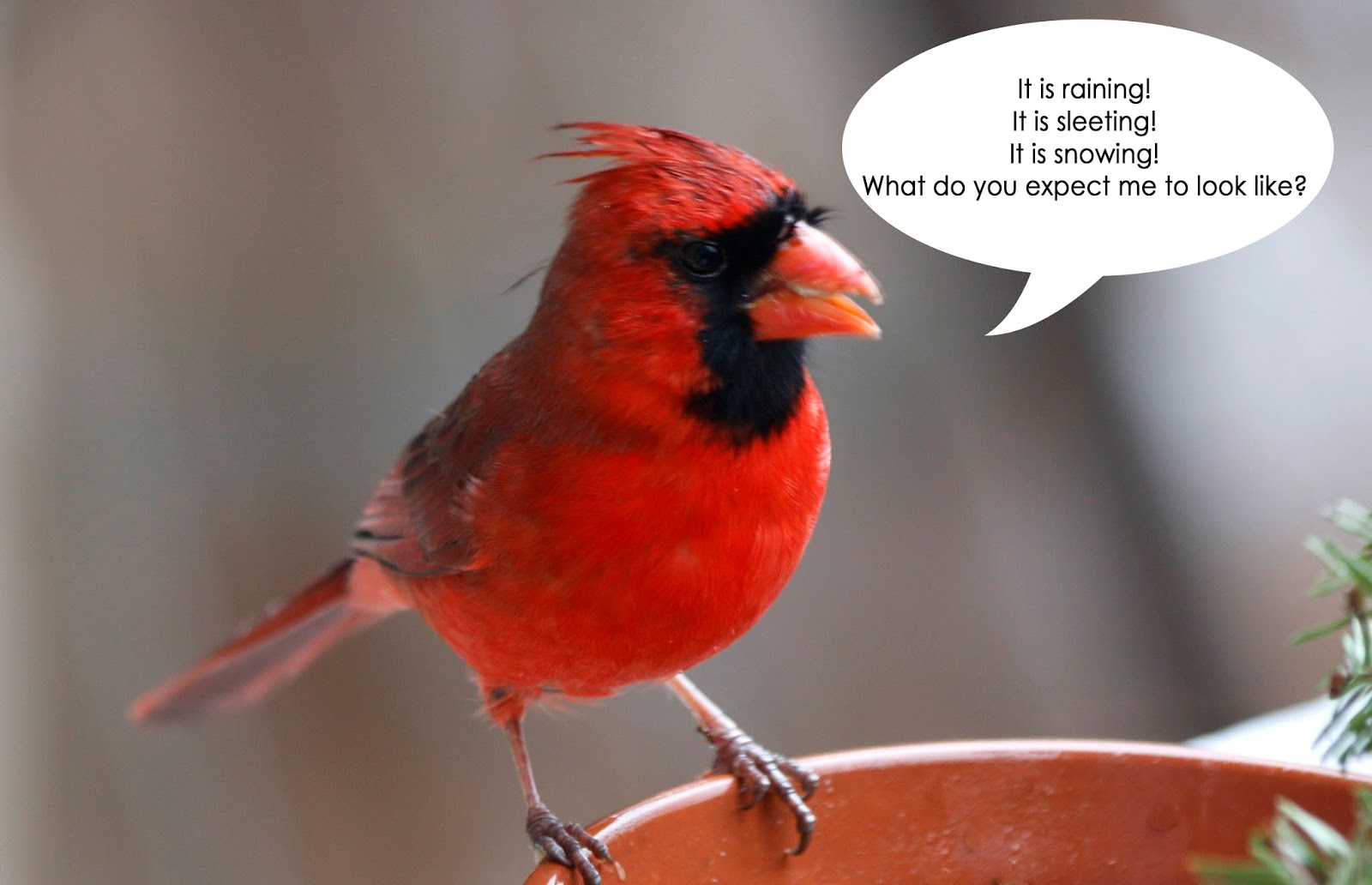 Last night the predicted, bitter arctic air left Santa's homeland and savagely battered and whistled outside our door and strained at our windows for hours.  We hide ourselves beneath a soft throw and watched the first episode of Season 4 of Downton Abbey which I had taped earlier.  It wasn't until after the TV was off and we headed to bed that we heard the howling, moaning, and groaning of the angry winter wind.  It was frightening and haunting.  It was all those things that make one think of the death of others and even their own death.  It was the loneliest sound I had ever heard, much worse than the sad nostalgia of that midnight train whistle that drifts aimlessly across an open field. It was Father Death determined to stay and embrace.

Snow had been predicted after midnight, but when I woke, as I sometimes do, at 4:00, the landscape was dry and brittle under my porch light.  I did not open the front door for a more fearless view for concern that I would startle the little wren that lives in the woodpile that we have stacked on the porch.  Sending her out into this wind-sheared night would be certain death for her.

The thermostat said it was a balmy 12 F outside!  They, those weather people who find these dramatic episodes a gleeful part of their career, had predicted 6 F which would have been even colder when multiplied by the added wind chill!  Were they disappointed that they were wrong? Did they 'Aw,shucks' that this had not been accompanied by a blizzard?  Were the people up north who have endured this winter's anger for the past two weeks even sympathetic that it now covers two-thirds of the country?

Where were all my feathered friends hidden?  Had they found shelter?

I made some coffee and waited for the sunrise and answers.

I do not live in "big sky country" but that does not stop the sky from stretching her blue canvas as far as the tree top horizon and dancing with flirty feathers across the air above my head.  This is the sky before our big cold front came through a few days ago.  While we did not get the quilts of snow, we did get a taste of winter and about an inch and half of the cold stuff.  It was light and fluffy and landed on top of a thin layer of rain that had frozen before the change to snow.  Taking a walk the next day was very crunchy and there were no animal tracks as clues of others that might have walked before the sun was up. 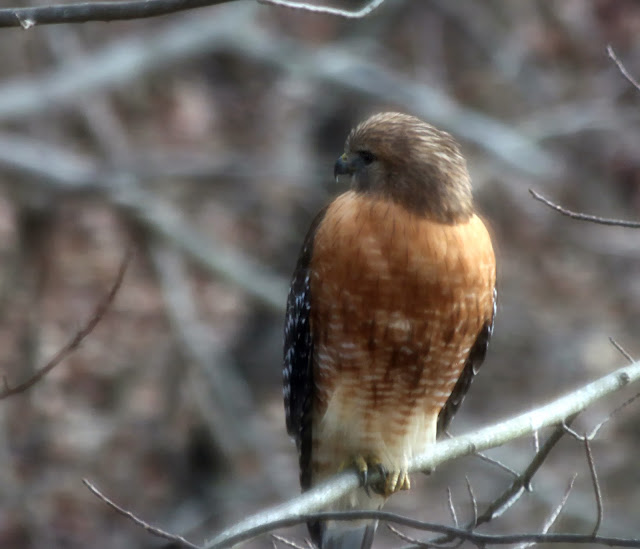 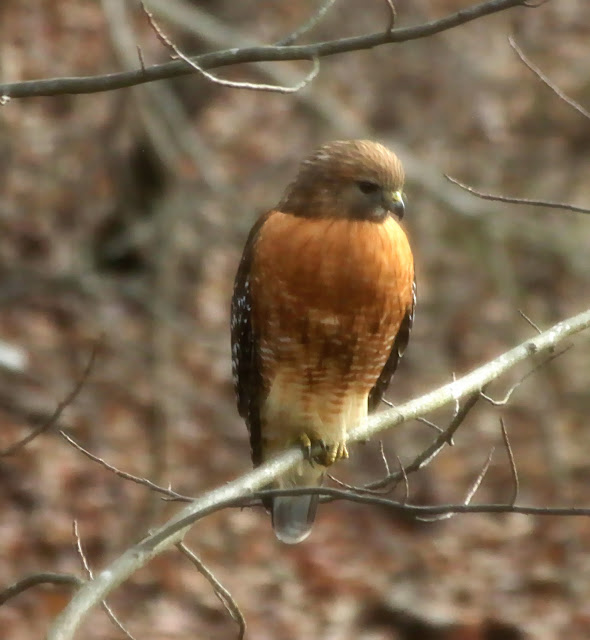 He sits, imperious, holding that regal pose, focused on the tiniest sound of movement and watching that precious lift of a leaf by the wood mouse in search of an errant seed.  He glowers, overlooking small birds with various brightly colored feathers that fly across his view and land teasingly close.  They ignore His Majesty without fear knowing his diet does not include them, knowing their dive and twist into the woods outmatches his sweep and swerve.  Yet the buteo's piercing eyes are magnetic and steely sharp as if they could see below the crust of this winter's earth into the safe den of each small rodent.  Broad wings are held tightly against his magnificent body like the drape of a royal cloak soft as a pashmina shawl in the color of warm chestnut.  He is both patient and intensely alert in the low angled winter afternoon sun.  I am impressed and glad to see him as my yard has been interwoven with the net of tunnels of moles and voles and spring will bring a population explosion.

(Taken through the screened kitchen window one recent afternoon.)
Posted by Tabor at 7:13 PM 13 comments: