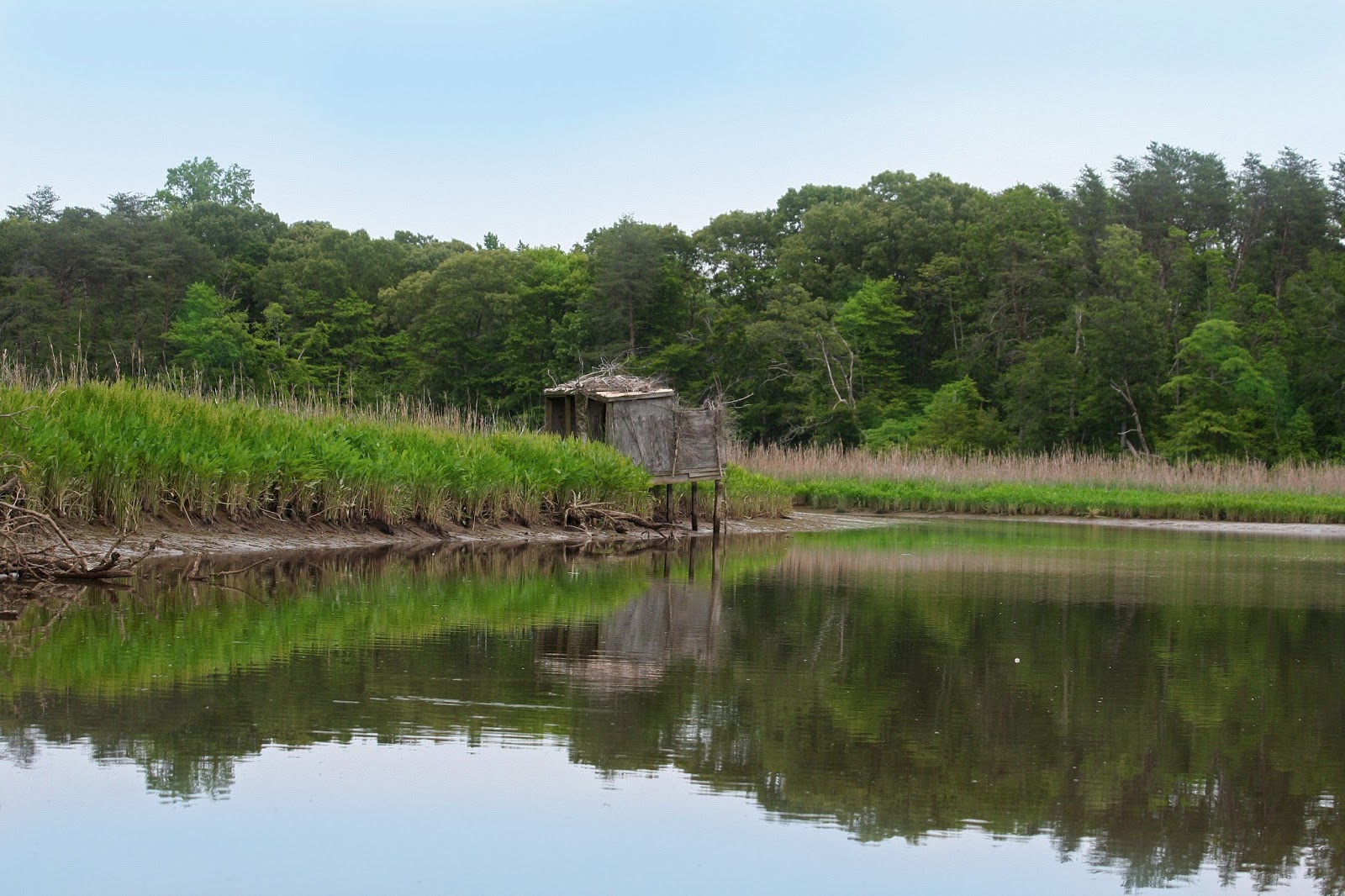 Few things in life match the smooth quiet release of a canoe as it is maneuvered away from the shore to glide smoothly past the Memorial Day fishermen hanging patiently on the dock.  It takes little effort to move swiftly across the river between a few holiday boaters and the noisy ski-doers into the quiet marshlands where only the shallowest of floaters can go.  Some may find the mud and the prehistoric water plants too strange for beauty.  But, of course, I know that all you have to do is keep your eyes open for treasures along the way, like this gaggle of butterflies playing in the mud... 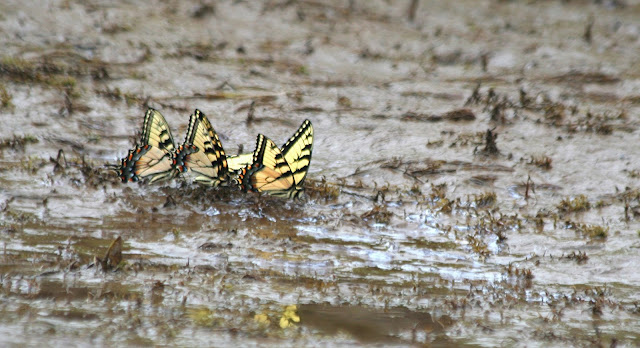 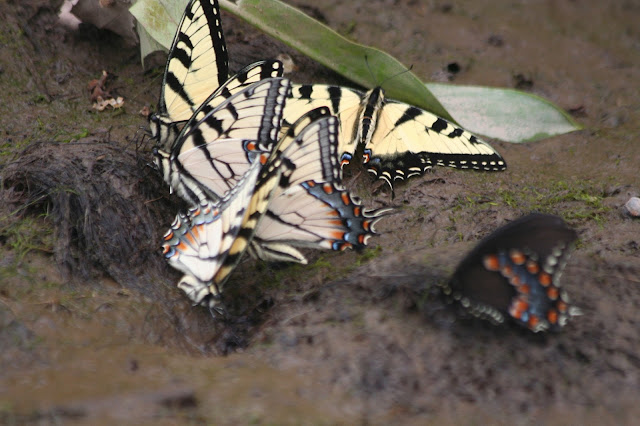 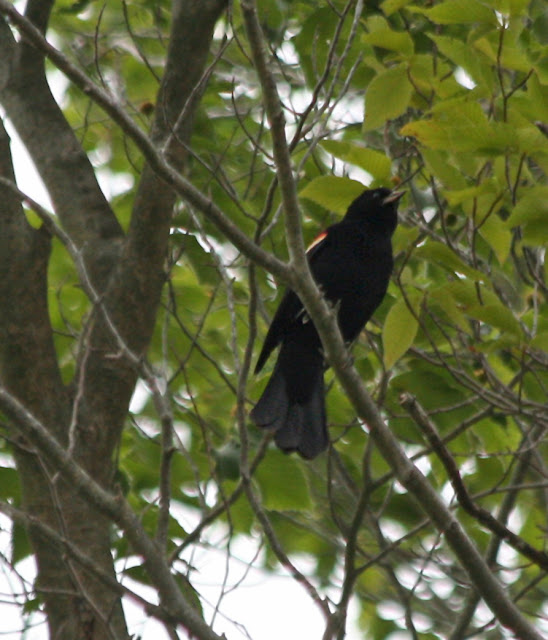 ...or this Red-winged blackbird that gave the most piercing call above us as we scooted beneath his tree.  The whistle was so loud and clear that at first we did not recognize the normally familiar song. 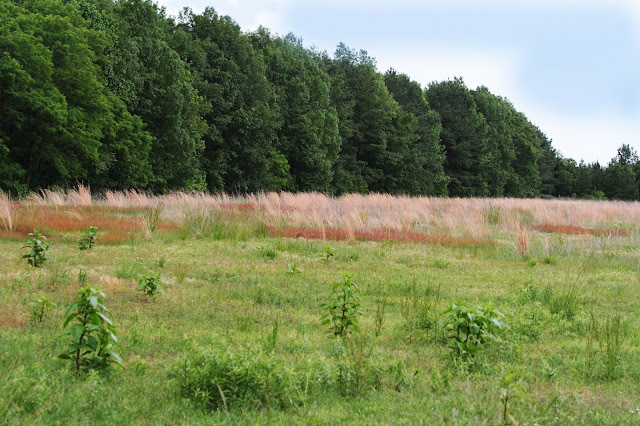 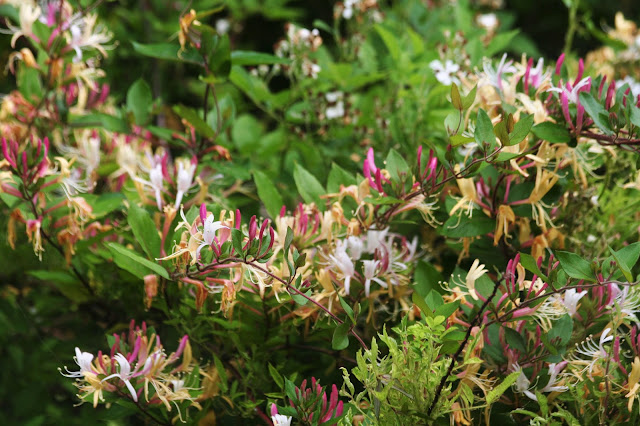 Fragrant honeysuckle that takes your breath away 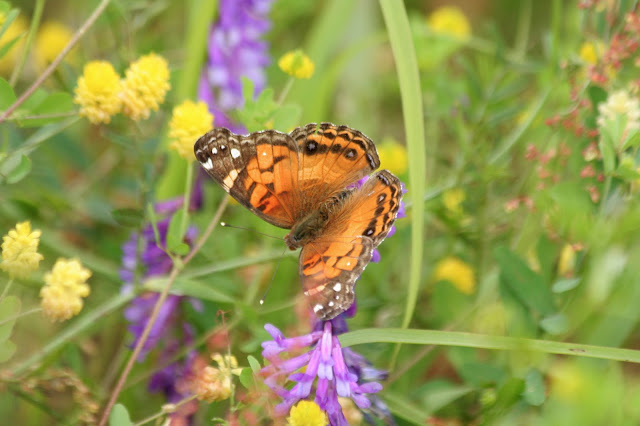 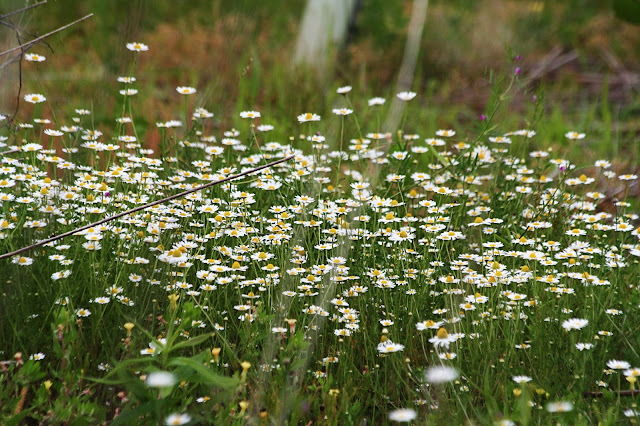 Now aren't you glad you came along and you didn't even have to paddle, or wear sunscreen, or spray on insect repellent!
Posted by Tabor at 8:02 AM 19 comments:

My Alarm Clock These Days 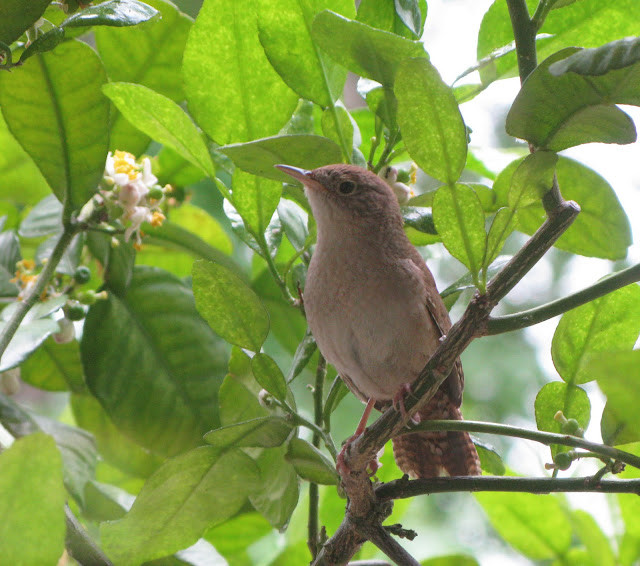 Here he sits early in the morning in my kaffir lime tree which sits in a pot on my deck. 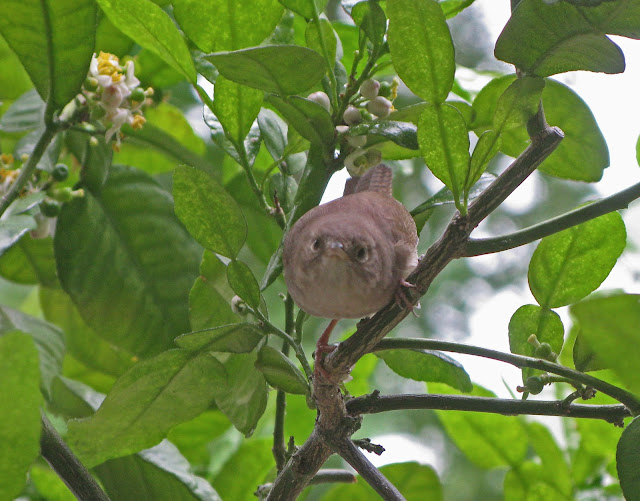 I think he is checking carefully to see if that movement he saw was me or just the shadow  of the sun. 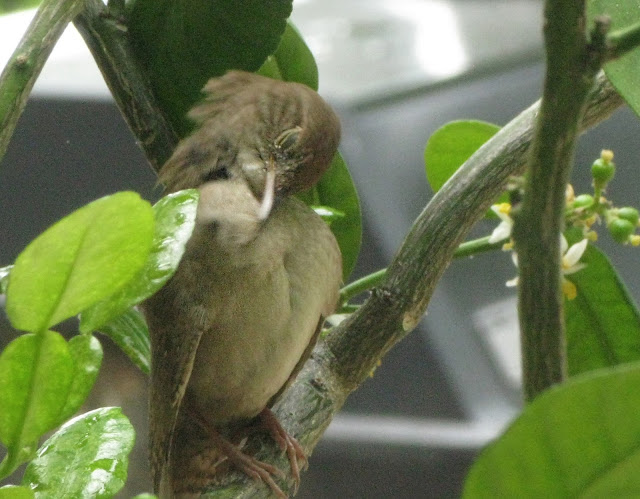 Next he begins his morning grooming. One has to look good, because these males are sometimes singing for a new mate while his old mate is still brooding on the nest!! 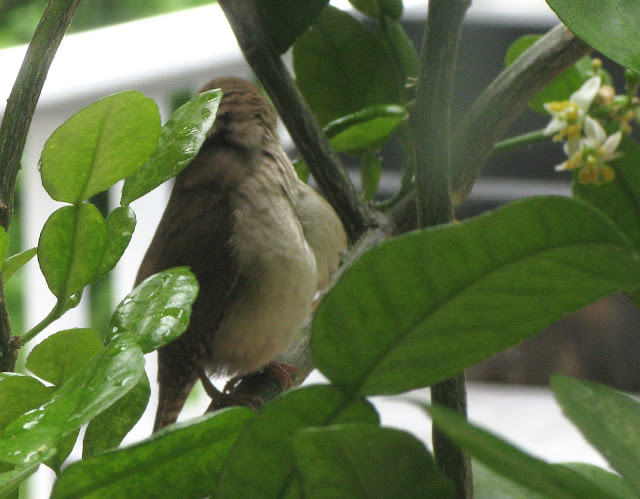 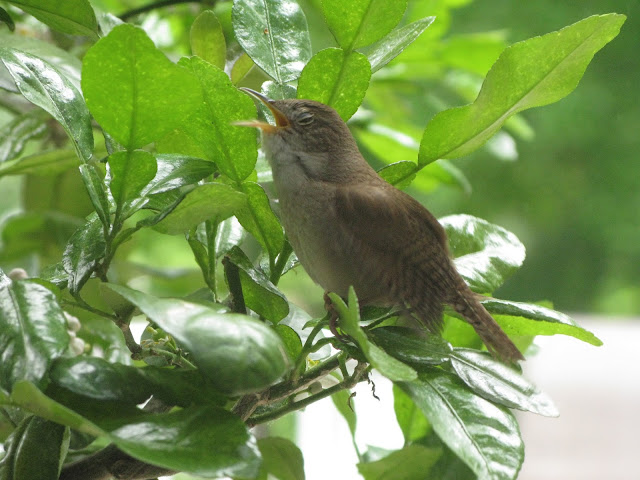 Everyone loves blue birds.  Right?  I mean what birdwatcher doesn't put up at least one mathmatically designed bird house that has just the right opening for a bluebird?  This doesn't mean that other birds will not use it, nor does it mean that the bluebird won't rent out a totally un-metric place to raise his/her young.  There are tons of posts on how to build a bluebird house and how to make the hole the exact optimum size (1.5 inches) and where to place it in your yard.

Last year the bluebirds used our ceramic house beneath the deck with its three inch wide hole.  Photos are here from that post.

This year two males and perhaps one female went in and out of that jar throughout February and March, but never settled on it.  Instead this year, a bluebird couple picked the brand new bluebird house that we had mounted on the arbor in March. 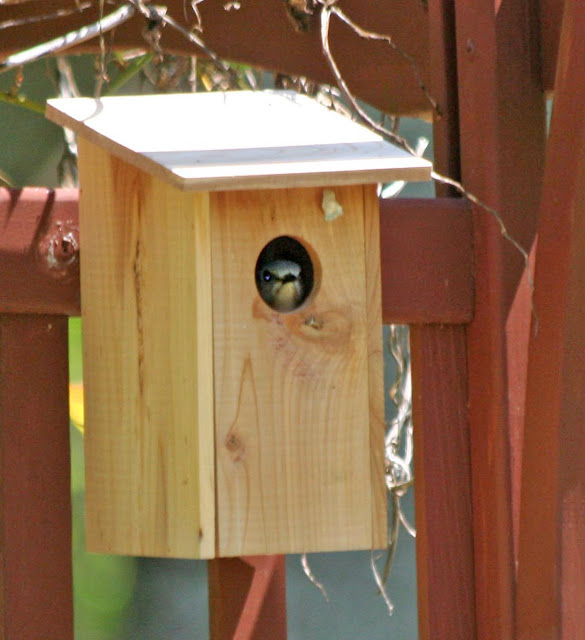 The female laid at least 4 eggs 9possibley more) that I could count on my quick peek, but everytime I went around the arbor to weed, or plant, or pick flowers, the male would 'snap' his wings with a click and then chirp and dive bomb me.  I tried to stay away as much as possible.  He was fearless and fearful.

This morning when hubby opened the front door to look at the front yard, we saw this little fledged bird on the porch looking tremendously lost. 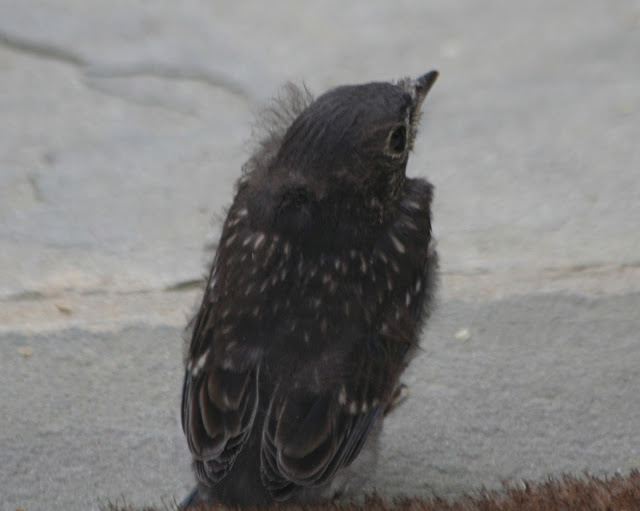 At first we guessed it might be a blackbird or cowbird because it looked pretty big.  Then when I studied the eye shape, I thought it might be a robin.  It did not fly away and allowed me to get close and snap a front view. 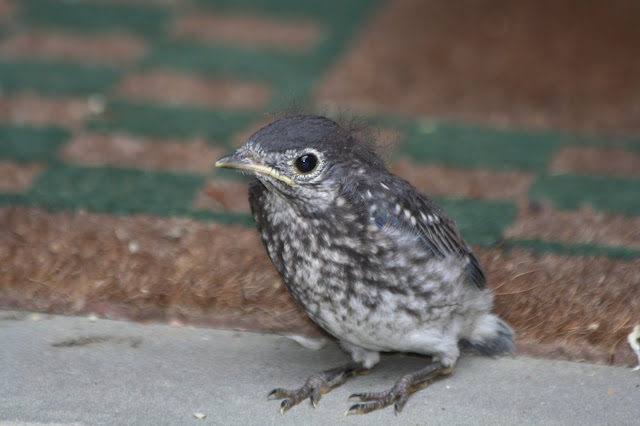 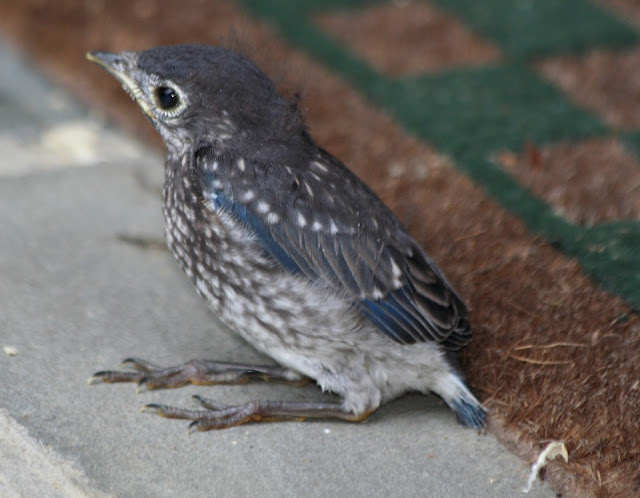 You can see from above that it is a little blue bird.  Its legs seem deformed, but I am not an expert on bird anatomy.  We tried to perch him in a nearby tree and he tottered over and then flew to the ground under the flowers.  I waited and watched for the parents for almost twenty minutes and they never showed.  All summer the parents had perched on this trellis or the fence posts, but they must have moved their young into the deep woods. 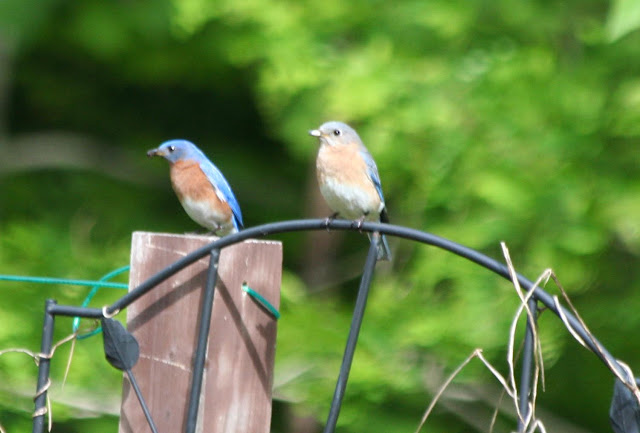 We put the fledge back in the house and actually brought it some caterpillars, but we did not see it feed.  Finally a bird rehabber told us to release it where we had last seen a parent.  We did and it flew through the fence into the woods only inches above the ground.  I hope he/she makes it, but I think this forlorn baby was the last of the group to hatch and is deformed in some way.  Sad, but it will be food for something else, and the bluebirds will probably build a second nest somewhere else.  We have a number of houses, so I will keep my eyes open for another clutch before the summer gets too warm.
Posted by Tabor at 1:44 PM 17 comments: 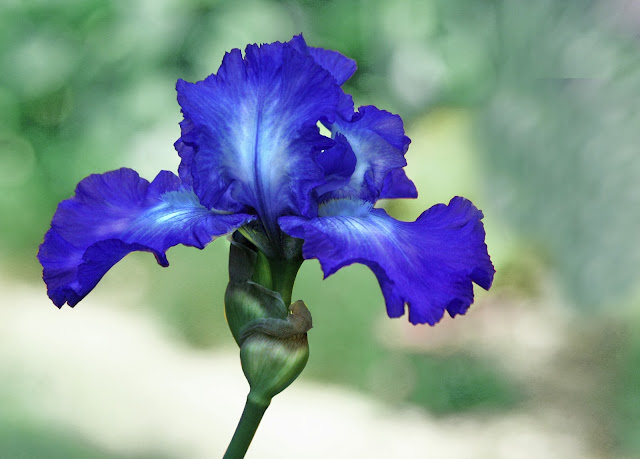 The wrens have taken over.  They have tried to build in my bicycle helmet and my garden tool tray and my husbands canoe...all because we left the garage door open one day.  They are noisy and attract a lot of attention to their nest, which makes me wonder how smart they are anyway! 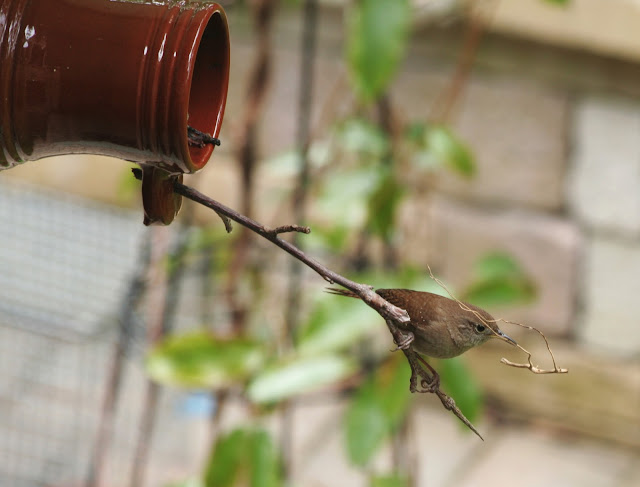 This one above is building a nest in the former blue bird house from last summer.  The bluebirds spent most of cold spring darting in and out of this jar, but never began a nest.  The wrens took advantage of the empty space over a week ago and then declared it home.  She is not shy in moving in larger decorative items.

This house is just outside my bedroom window and this is the time of year that I leave the windows open to take advantage of the comfortable fresh air.  She or he is very noisy...very early!!

These fairy ballerinas in their silken costumes last way too short a time dancing in the spring winds.  They swirl and twirl and waft on grape perfume and then are gone almost before the wind dies down.  You must click on them to feel the breath of a spring wind on your face. 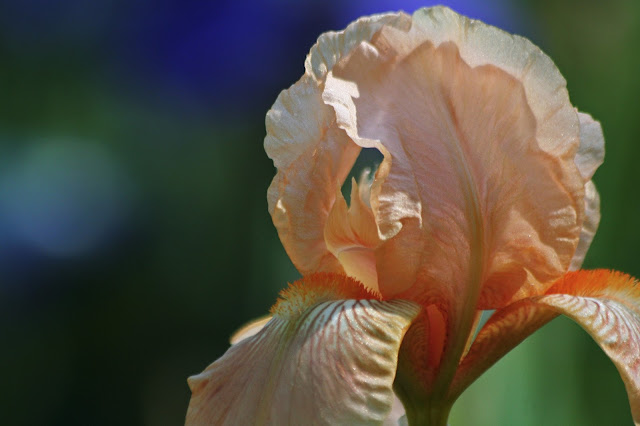 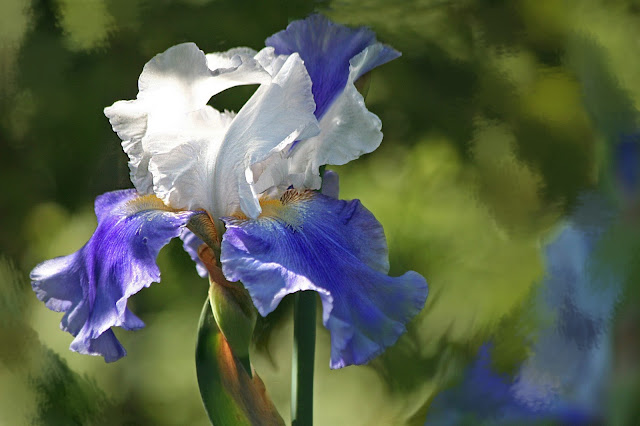 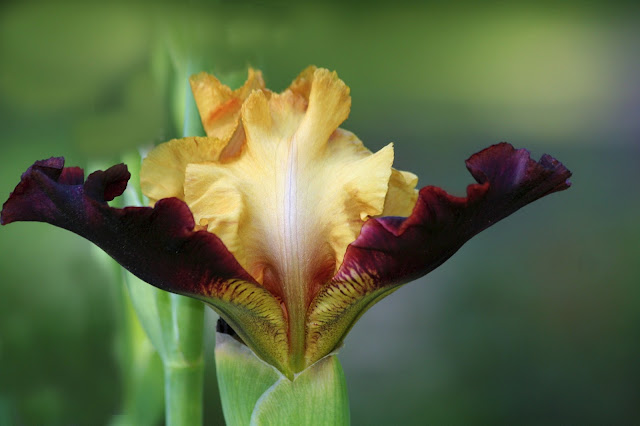 A few of the readers to this blog have asked about Fred and Ethel.  Are they back?  How are they doing?  Any photos?  If you do not know about Fred and Ethel you can go here  and for more here.
Or if you are stuck in bed today you can also check out the whole series on these two fish hawks by typing "Just Excellent" in the Blogger search window and working your way forward for several additional posts.

Fred and Ethel are my seasonal residential osprey.  Hubby and I in our expensive project of putting in a living shoreline, both to protect our river's edge from further erosion and to improve the environment of the area, also included an osprey platform.

I think that this platform cost us $300, in supplies, labor and permit application.  We did this so that the pair of osprey that visit each year can safely nest somewhere.  For a couple of years they would nest on the high crane that is parked across the river.  This was neither large enough or safe enough in wind storms for them.  Then two years ago they decided to nest on the roof of the cabin to our motor boat and when I kept removing the sticks they moved to our neighbors canvas top to their boat.  That nest was destroyed and they lost their eggs. 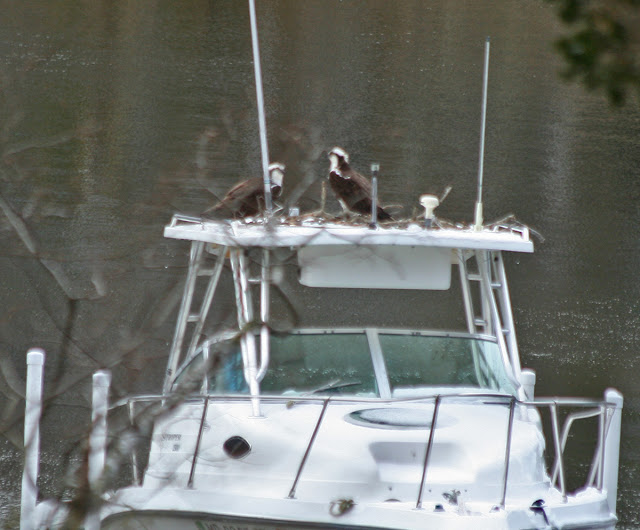 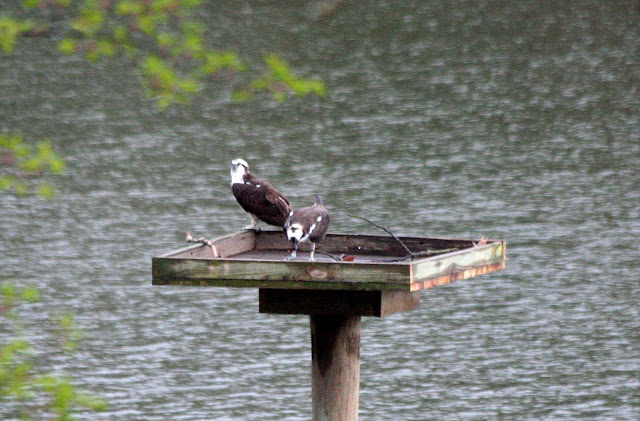 Last year was the first year they returned to find the osprey platform and they claimed it without hesitation.  The female, Ethel, has been banded.  The male seemed to have some dyslexia in performing his manly duties that year and we surmised that perhaps she had lost her original mate and this fellow was new to the task? Was this Fred II?   At any rate, if she eventually laid eggs or  not, I never was able to determine.  Her nest sitting was uneven and no young osprey ever appeared.

This year they arrived within days of St. Patricks Day which is the time we look for them.  They carefully added sticks of all sizes to the nest and mated.  I was so busy this spring I did not have time to really study them and their courtship.  But each day this week she has sat with regularity on the nest, so there are eggs on that soft green algae from the river.

She clearly remembers me as the person who destroyed her nest in the past and she angrily flies off and on the nest when I am at the dock sitting and enjoying the sunset on our new benches.  She cries and cries until she finally sits back on the nest and then just chirps with disgust until I eventually head back to the house.  As a result, I have not attempted much in the way of photos.

But, since Fred and Ethel have a fan club I will try to be more generous in sharing their drama in the coming weeks and make an attempt to get photos.

Dozens of hundred-year trees have made their large and impressive farewells within the last three years in this yard.  With or without a storm too many have fallen across the raven and across the lawn!  Last year our little (10 foot high) dogwood faced a duel with a large tulip poplar and lost one side of itself.  It looked sad and forlorn with a torn wound throughout the winter and we wondered how it would fare come spring.  But like those who have faced battle and lost something precious of themselves and yet lived and gained strength, our dogwood came forth.  In one version talking about this tree it says the dogwood got its name from the hard wood which the American Indian used to form "dags" or daggers and arrows and it was first called dagwood.  This wood was so hard that it also was used for tool handles, wine or fruit presses, loom shuttles, mallets, butcher blocks, cutting boards and even knitting needles!  Its scientific name is Cornus florida [flowered horn].  It also has inspired legends about reminding the early Christians of the Passion of the Christ with its petals forming a cross like pattern and the very tips of the bracts blood red like the piercings of the hands and feet in the crucifixion.  The original American dogwoods are white with this red marking, mine is a hybrid that glows pink.

My dogwood came forth this spring branches unsymmetrical but with perfect pink blossoms to glow another day.  It is close to my tiny arbor and I sit and watch it stretch in the evening sun with its flowing wavy bracts that surround tiny innocuous little yellow petals in the very center.  Even the leaves with early growth have flowing lines and a pink glow.  I watch new growth on the vacant side and know that in years to come, only a small scar will remain from its battle. 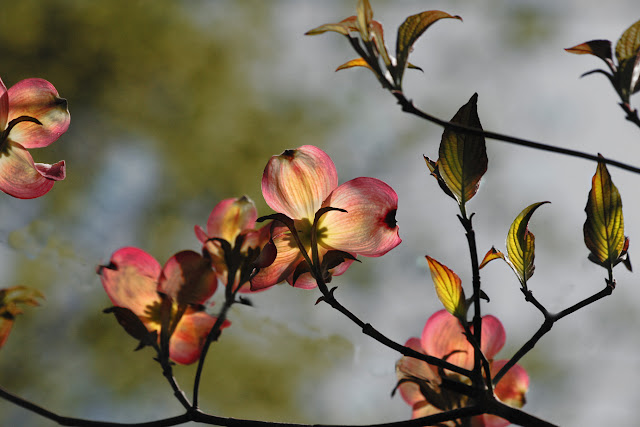 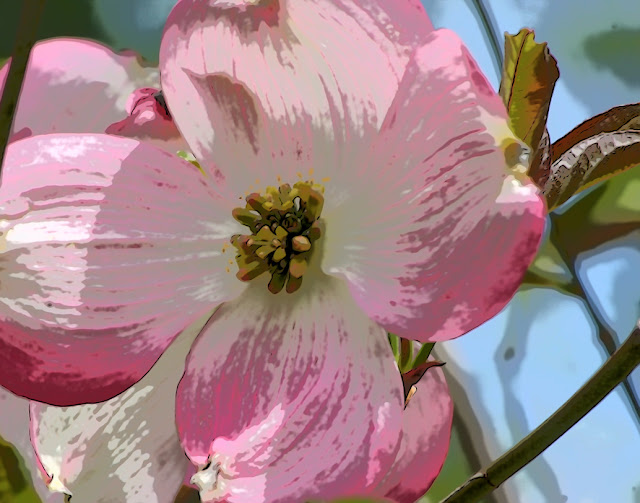