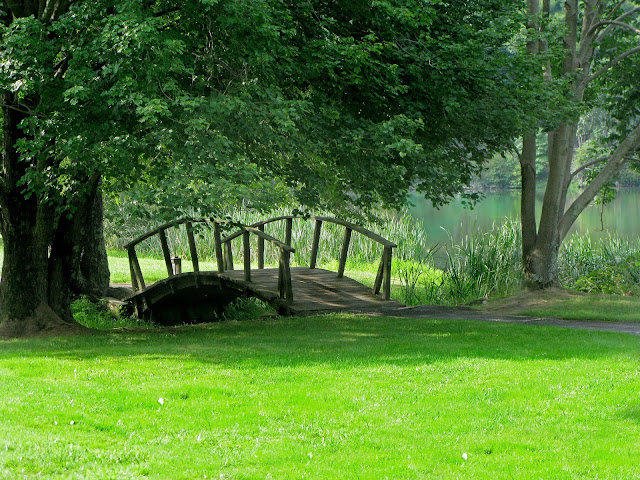 So much energy expended in treading water this green summer.  Soon I will cease this useless task and swim toward the shore and begin once again to Zen just a little....soon...because fall is fast approaching. 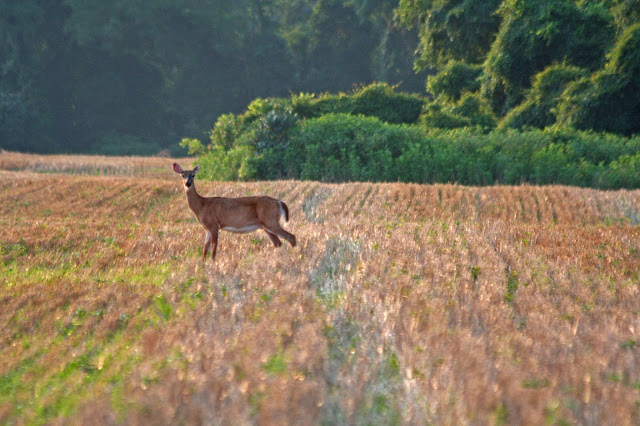 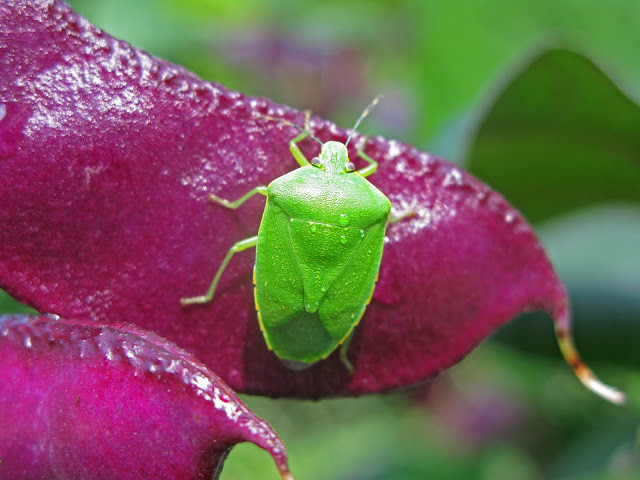 will be exchanged overnight to fall's amber colors. 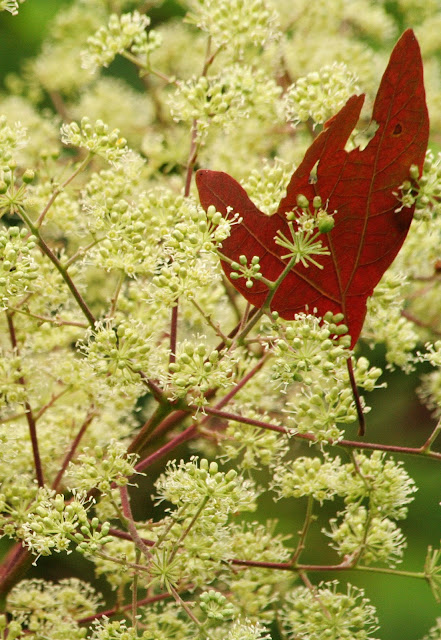 The Saga of the Seeds

I was so excited to be photographing a new flower this summer.  Yes I have had sunflowers bloom in summers past, but this year was such a good variety and I actually got several plants to stand proud and tall across my yard.  (Several meaning sparse, few, scanty, miniscule in numbers.) 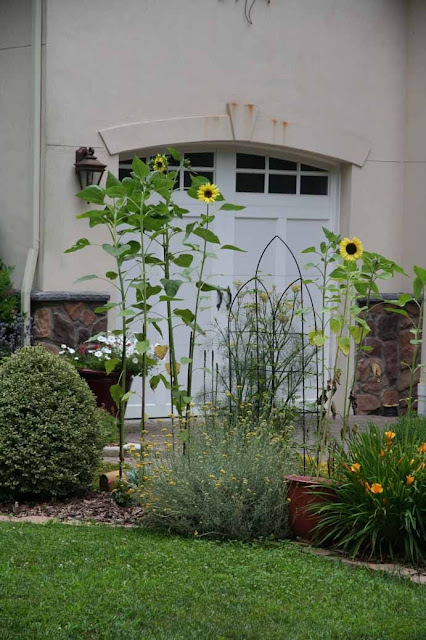 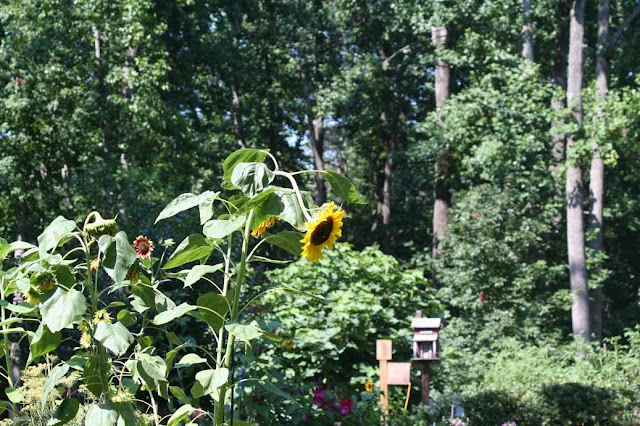 Yes, they needed my support, but all friends no matter how sunny their dispositions need support on rainy and windy days.  Those heavy heads can be quite droopy once the weight of the seeds kicks in. 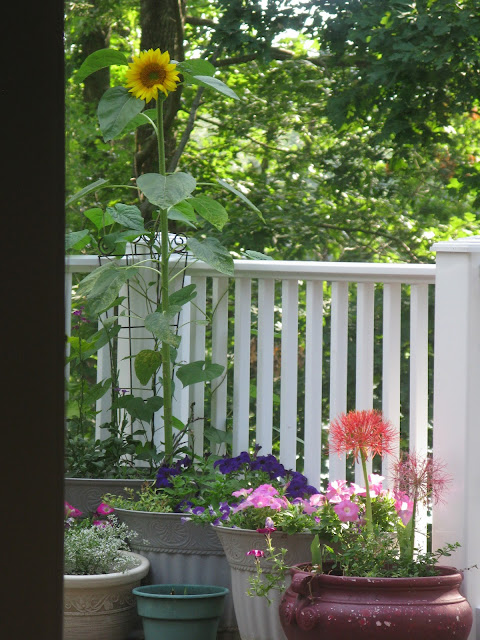 I even had a volunteer just appear in a pot on my back deck!  Yes it was a party crasher, but you know some party crashers are always welcome.  Soon it was full of seeds.  And soon the goldfinch, which I RARELY see until the coneflowers seed, were popping by morning and evening.  I could just sit in my living room and watch the floor show! 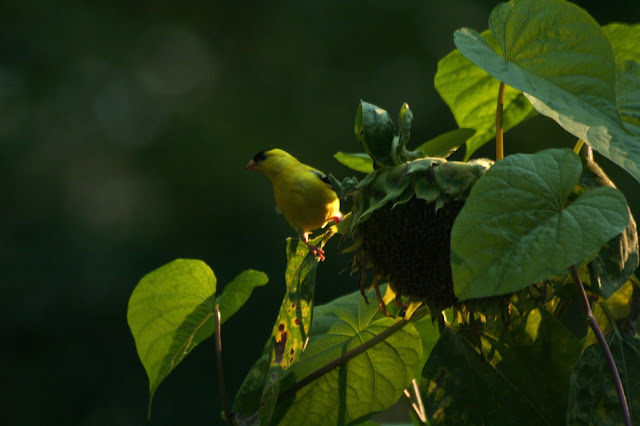 Once the morning sun was over the tree tops his golden glow was easy to spot even though he tucked himself in the leaves of my moon flower vine which was embracing the dying sunflower.  (I guess that they had had an affair of some sort?) 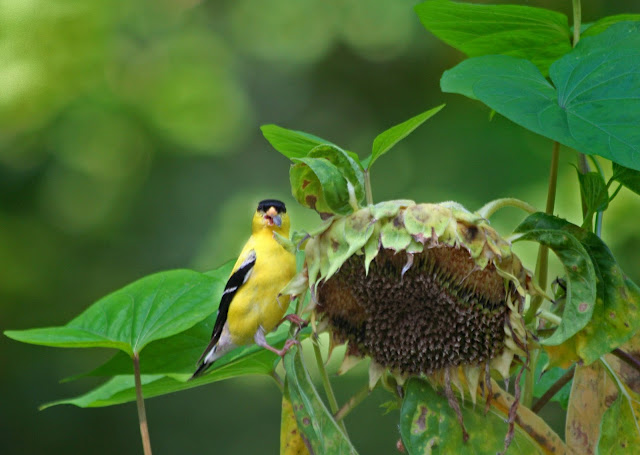 He really was a beauty and soon made a dent in the seed head.  BUT  it took no time at all for the gray squirrel to also crash this feast.  His manners were despicable and he did not consider sharing.  Faster than the goldfinch can fly away this was the carpet on my deck... 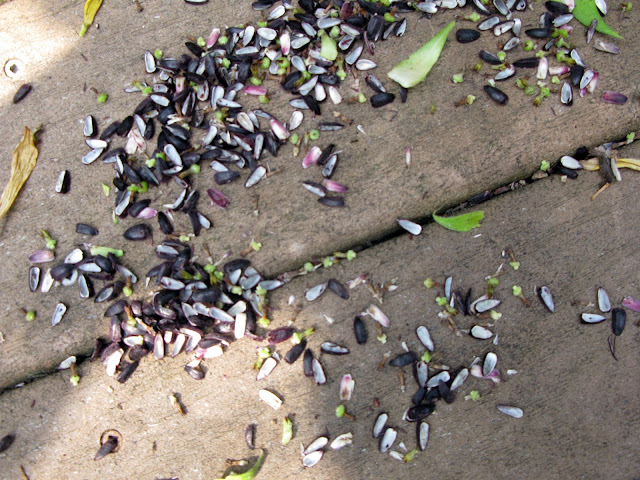 And this was how the remaining flower heads looked!  Egad, it was a frat party. 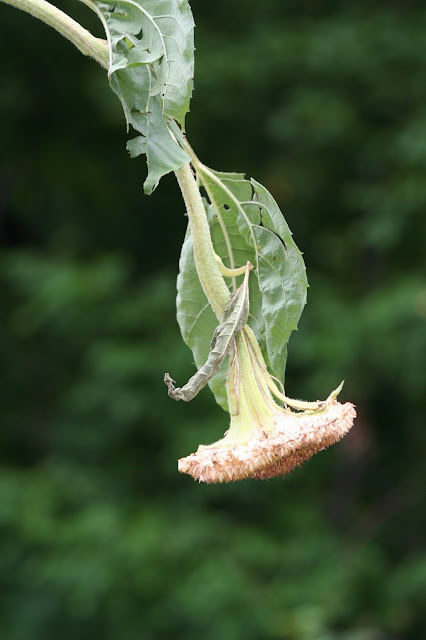 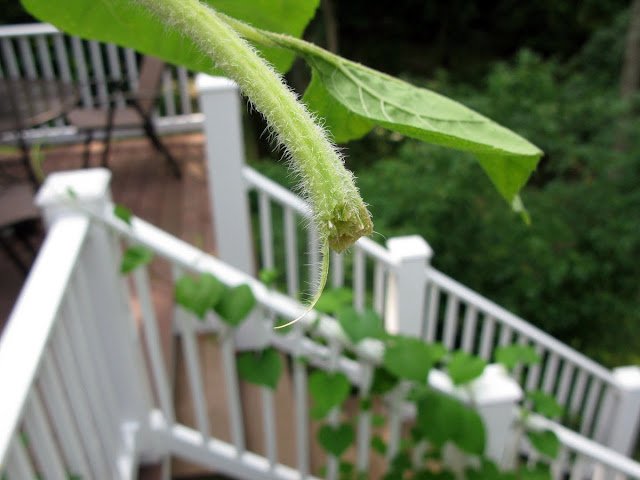 But I was not filled with dismay...because prior to this disaster, I got the following to warm your spirits as the mornings grow cooler. 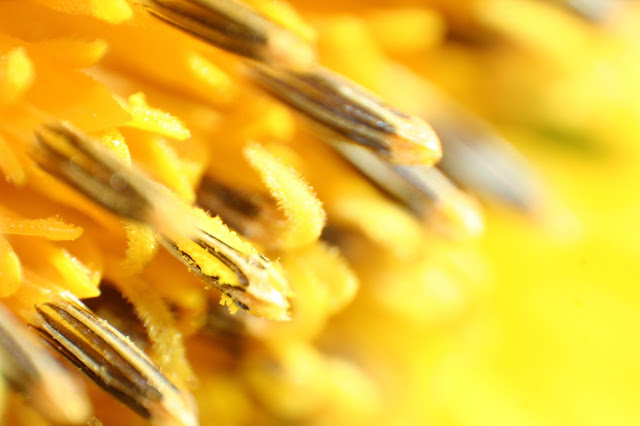 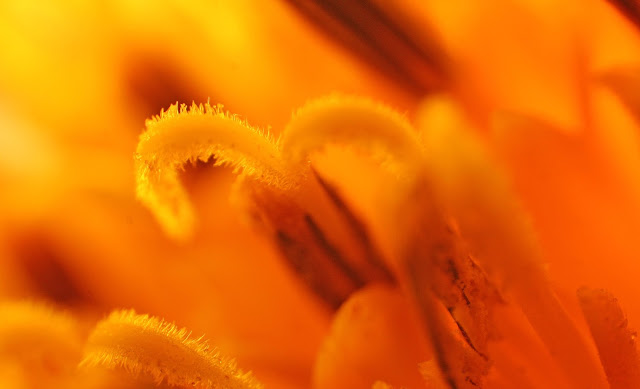 The two above I got while experimenting with a ring that I use to turn my lens backwards and convert it to a macro.  Cheaper than buying the macro lens, but VERY difficult to focus and stabilize! 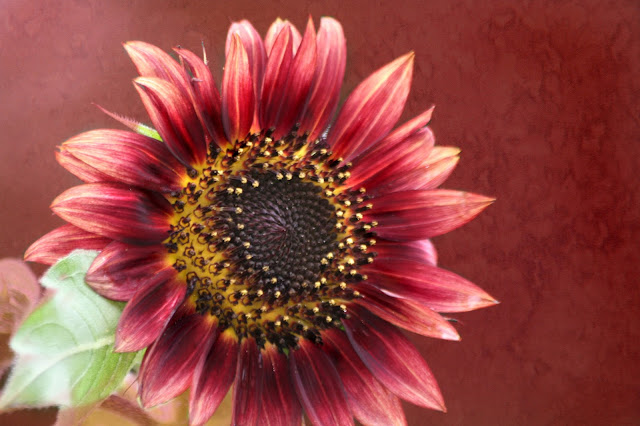 And since there was a party...how about a South American theme?   OLE!

Americans who remember their history know the story of Jamestown, the first permanent settlement of the British Empire on the new continent of North America on the James River.  But before the British, the native American Powhatans used this river to fish for sturgeon and other freshwater fish and used the flooded banks of this river for their agriculture.  Once settlement was started by the white man some beautiful plantations were constructed up and down the river with most labor (forced) provided by the black man.  The first windmill of the new world was built along the James River shores at the fairy-tale named Flowerdew Hundred Plantation.  This river is one of the longest rivers in the United States.  Its history is filled with death and harsh industrial growth and war that conflicts with its gentle flow that on most days turns like the soft skirts of a plantation lady's gown.

This river is magical and magnetic and I think also one of the most lovely.  I spent some time recently in a tiny town that sits back from the flood banks of the river and one evening my husband and I took a slow, peaceful walk across the grasses.  Come along and I will push you on the tire swing for a while and also bring some bread to feed the geese later.  Click on the photos if you are not afraid of getting your feet a little wet. 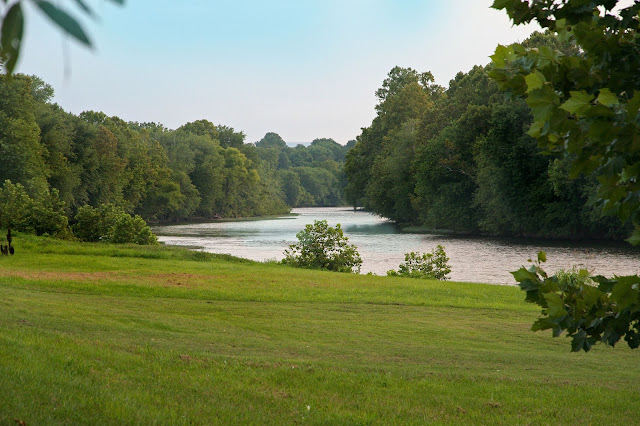 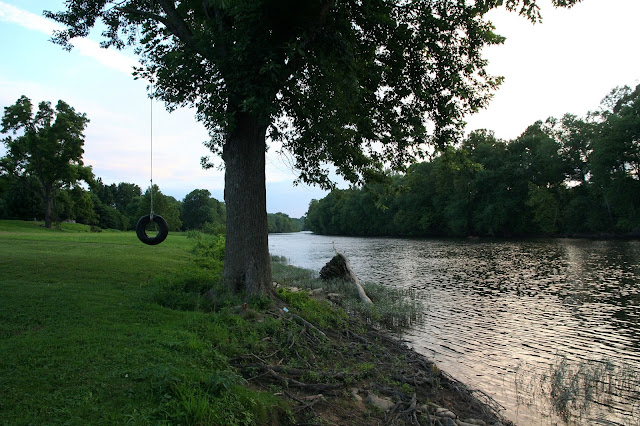 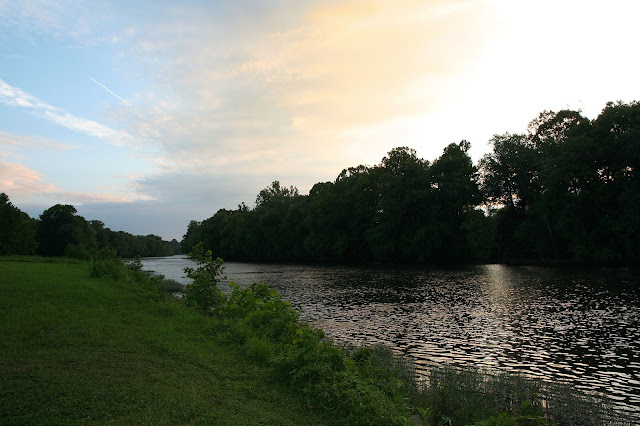 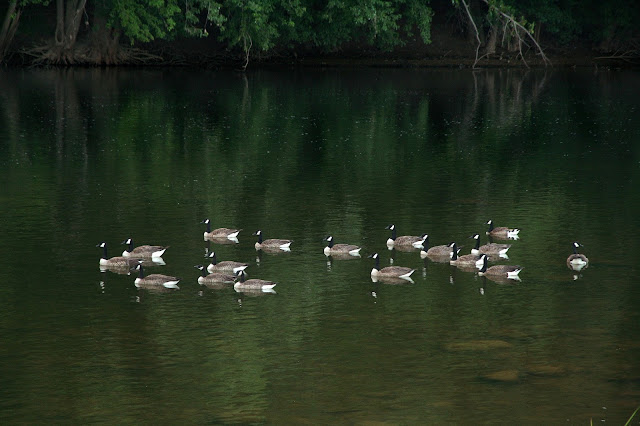 Perhaps if I was not so busy with my grandchildren I could identify for you more accurately these little toads which live on my banister down that goes down to the patio.  They hide under the huge leaves of the moonflower, which has an exotic fragrance that attracts all kinds of bugs...they somehow know this, even though a moonflower is an exotic tropical plant that only grows because I buy the seeds. 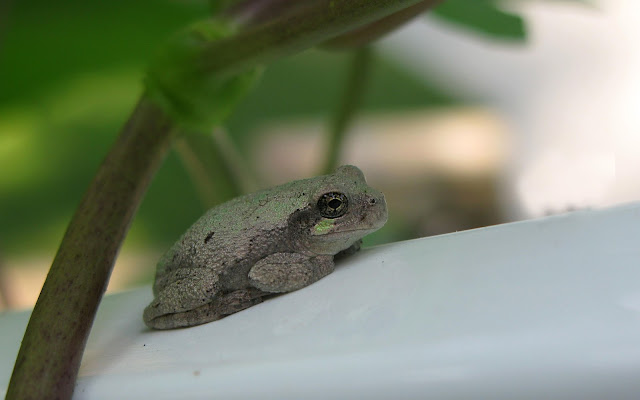 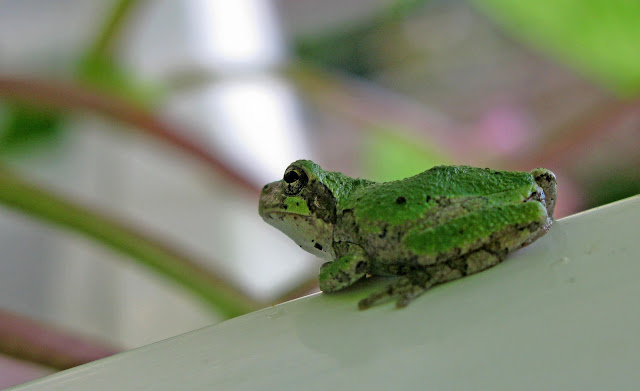 Both are smaller than my fingernail.  One is probably a male and one a female.  I have no time to research and ind out which one, but although they hang in proximity...they do not hang out together!  They are so beautiful.

PS..as one of my readers comments below, they are frogs and not toads.  "Bird voiced tree frogs."  I do know they live in trees and also patio umbrellas ;-).  Please click on the photo for a larger view.
Posted by Tabor at 6:43 PM 11 comments: 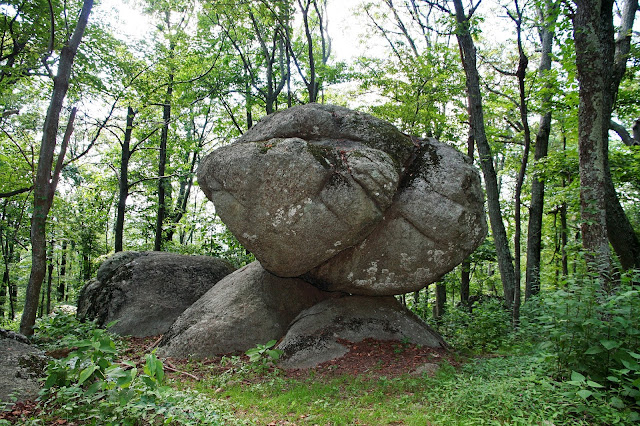