Up in the Tulip Poplar Tree

About three weeks ago I was awakened by crows throwing a fit over something.  They seemed close to the house, so I figured it must be a hawk too near their roosting place.  I sighed and tried to go back to sleep when I heard the hawk also yelling back at them.  Even if you live in the woods the animal neighbors can be just as noisy arguing as that screeching little old lady and the teenage boys on their skateboards!  Still this demeanor was way too early even for me.

I reluctantly dragged myself out of bed to see where this was happening, and discovered as I opened the front door where the cacophony exploded, that it was right outside the garage door in that big old leaning tulip poplar tree...that one we are saving money for to bring down as it is a threat to the garage and upstairs bedroom.

The crows were all around the top of the tree, some flying and some resting on branches cawing with vehemence.  Then I saw the hawk.  (No tripod, so apologies for the blurred images.) 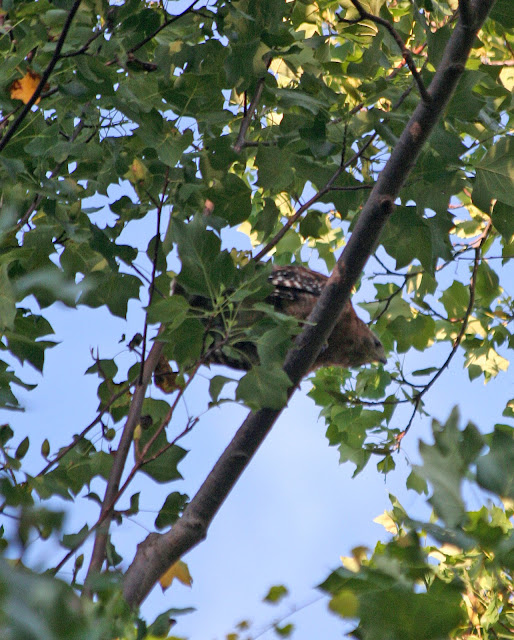 He was not looking at the crows and he was screeching just as loudly toward the center of the tree and then he took flight, perhaps at my sudden appearance. 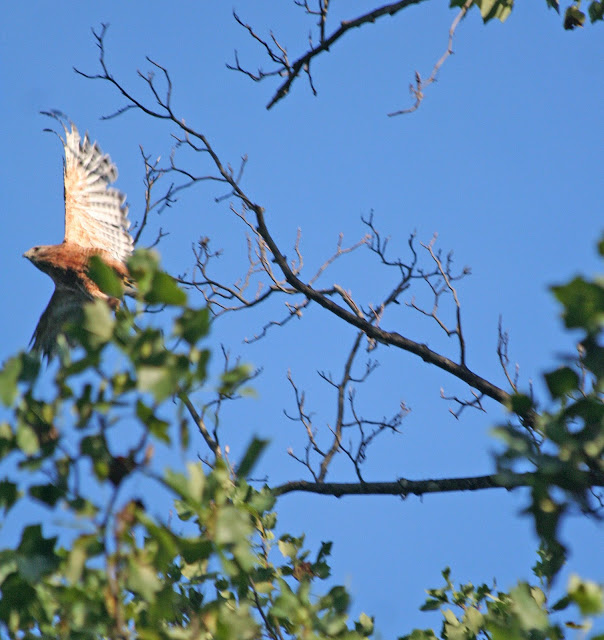 The 10 or so crows continued to caw in anger and flap their wings, but slowly a few flew away.  I studied the tree and suddenly noticed a HUGE wasp nest.  The shape of a football and three times that size.  Were they angry about a paper wasp nest??  I grabbed the binoculars. 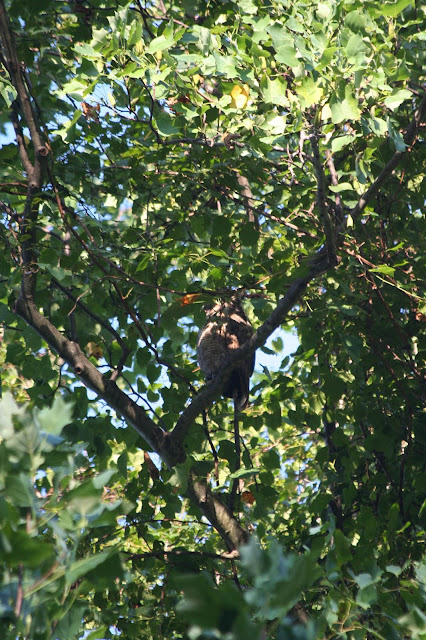 Of course, as I studied with the binoculars I realized it was NOT a wasp nest high up in that tree that was creating such dismay among the feathered ones. 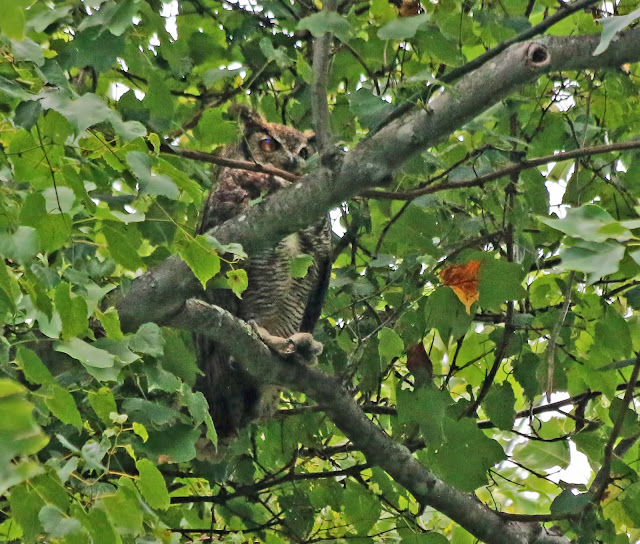 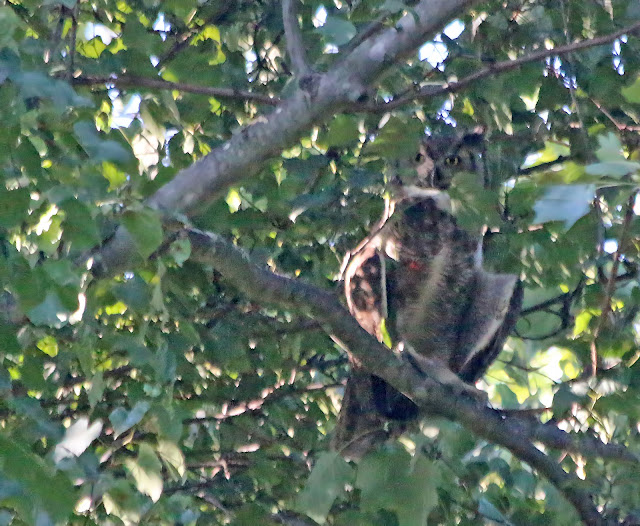 It was a Great Horned Owl. He was resting bored and patient but did give me a bit of a chill when he gave me the evil eye.  This magnificent animal returned on alternate mornings for almost two weeks to sleep sometimes opening his wings slightly on the hottest days and once appeared to have blood on the edge of his wing.  I think when we were planning our canoe trip later and had to load equipment onto the car in the driveway he must have decided to find a quieter roost because I have not seen him for over 5 days.

Still the short visit was a thrill!  Now we are undecided about bringing down that tree.

For months now, ever since early spring, there has been a female cardinal tapping at each of the windows around the house.  Some mornings she hits the bedroom window just as the sun is coming up around 6:00 A.M.!  She does this several times a week and now we are into August when bird hormones and energy are supposed to be dwindling.  Yet still she and her significant other arrive on the patio, bathe in the birdbath, feed each other, and then, while he rests on the back of the patio chair and cleans his beak or grooms his feathers which now are molting hideously, she lands on the doorknob and taps at the deck window. 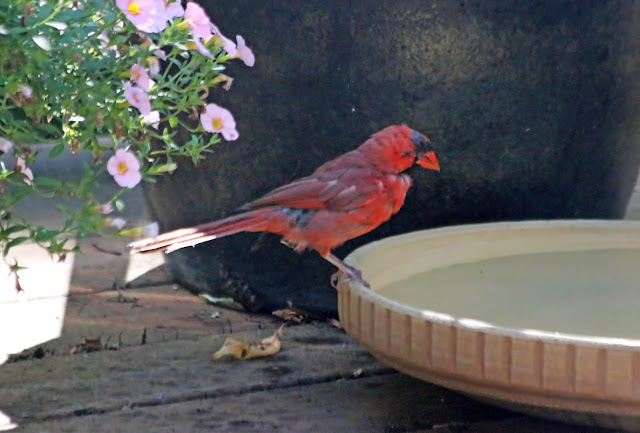 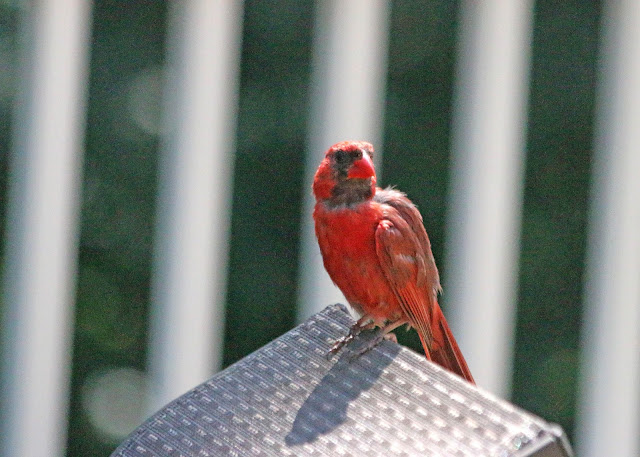 Somedays she puts on her crazy hat and rushes at the patio door like a suicide dancer scratching as she claws her way from bottom to top.  Maybe this is the feathered version of the pole dance?  Sometimes she just stops and stares a my interior decoration as if she has stumbled upon some bordello. 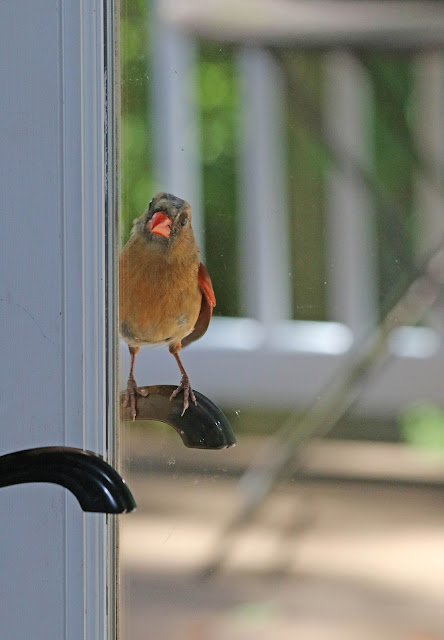 I chase her away if I am truly annoyed, but she seems to enjoy the interaction with me and laughs when she flies into the woods, so I have given up.  I wash the bird spit off the windows every few weeks, and try to ignore this aberrant behavior.  If she has built nests and was tending young ones, she must have lots of energy left over. 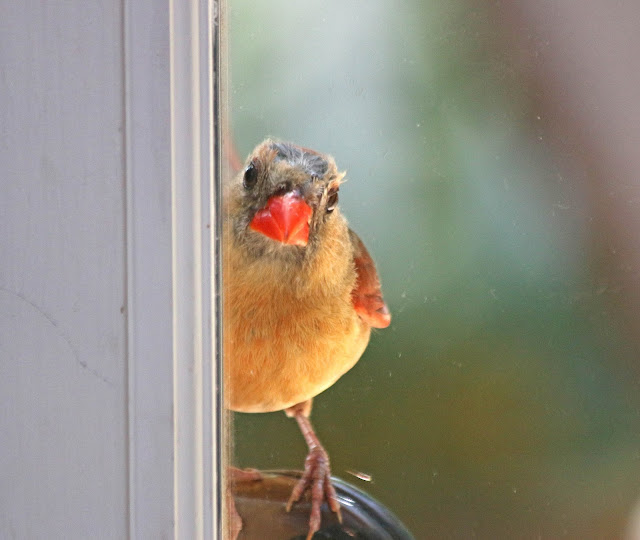 She seems to reflect this hot and angry summer we have been having with her erratic behavior.  We had good rains in July but now we are into high 90F weather with no rain most days, sometimes only an electrical storm; it is harsh.  Even the cicadas seem to sing with a rusty, scratchy sound rather than their rhythmic percussion and I hear not a peep from our frogs in the rain fed depression down in the ravine...and I am going to kill this bird as soon as I finish my iced tea.
Posted by Tabor at 2:48 PM 12 comments:

Recovering from my second batch of visitors and actually have this weekend free!  Let me share some peace and beauty with you in my photo painting morning! 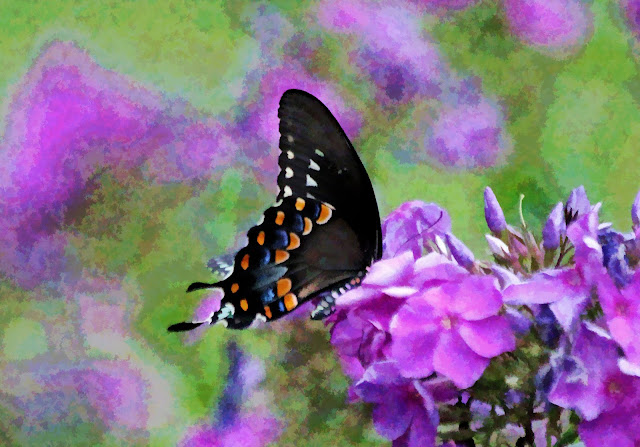 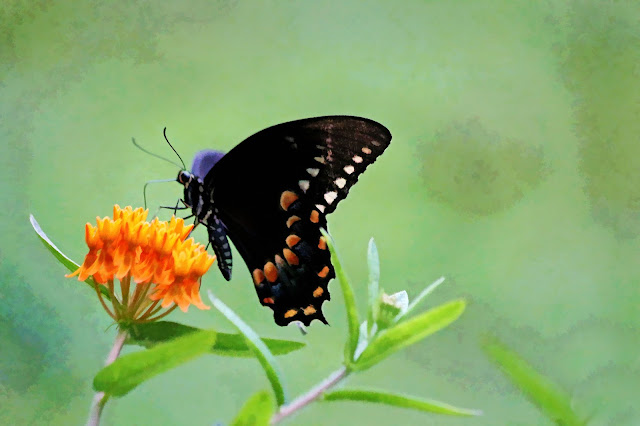 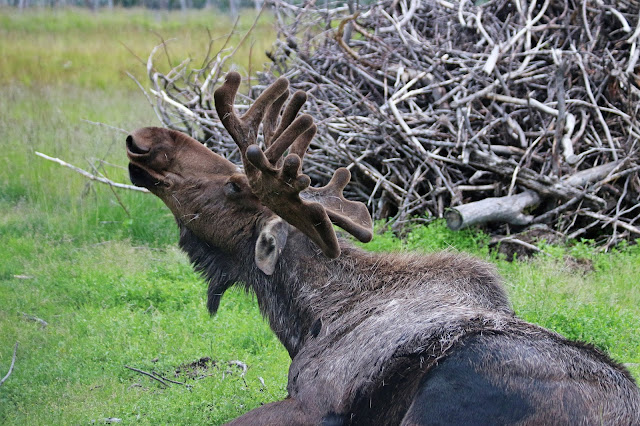 A few heavy downpours over the early August days break the heat but hold onto the humidity.  Yet, they provide enough to quench the thirst of the tulip trees which in late, hot, summer are dropping an abundance of yellow floating leaves that almost instantly turn to burnt brown on the sidewalks and grassy hillside.  Their scuttling crispness sometimes startles me when a breeze pushes them across the driveway like a large alien bug.

There are ethereal beauties that catch my eye as well in the small drop in temperature.  Our swallowtails are in abundance this year.  They are selective in which nectar filled trumpets they visit.  They avoid my purple petunias on the deck and go again and again pressing their faces into the verbena blossoms that are just inches away.  They lift like a drunken feather, then sink again to the next blossom. 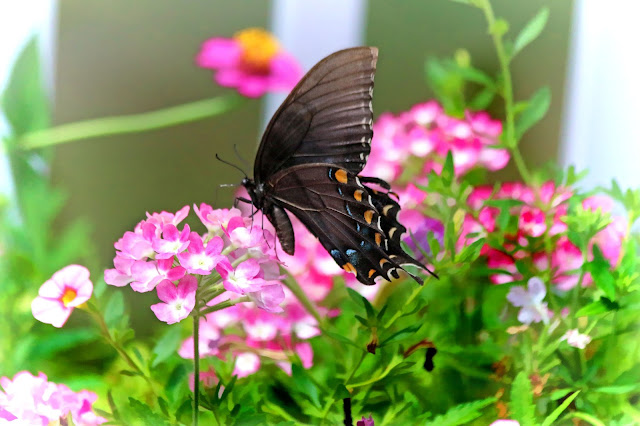 They look particularly beautiful when visiting the cosmos which are struggling this year against the few pounding rains after weeks of heat and drought.  When these beauties are satiated they float across the yard like zephyrs with tiny silk capes; slow, dipping even, and clearly in some mindless pleasure.  If I could see their faces, would they be smiling? 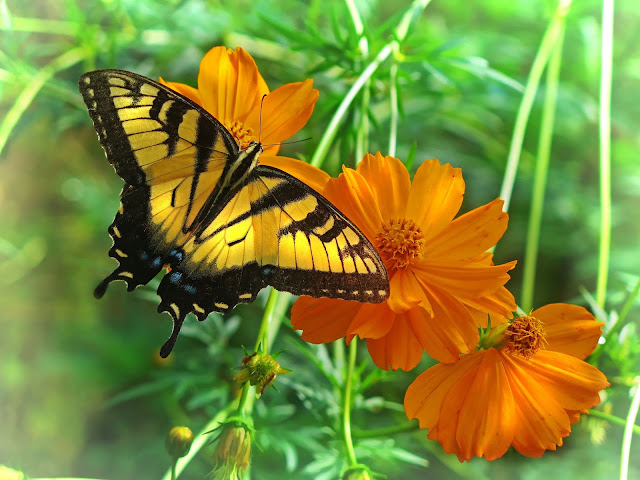