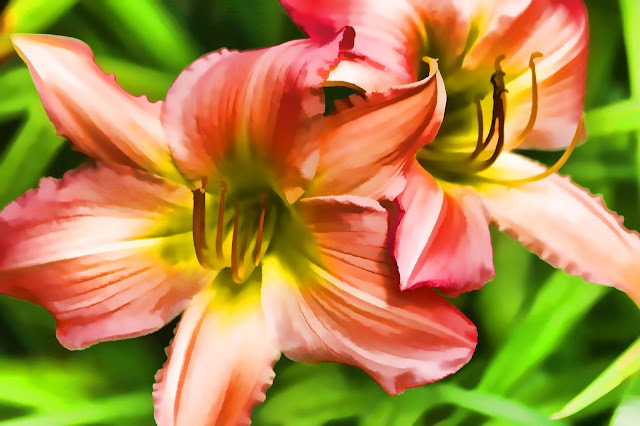 It has been a time of rains, tremendous rains. Three inches in one day! Floods along some low parts of highways and roads, but no flooding of homes...even tornado warnings in areas close to the Bay, but no touch  downs...no scores, thank goodness.

After these rich drops of water, filled with injected nitrogen via the lightning, arrive the chemistry has made the green jungle stretch and grow and overshadow all.  As I drive down various roads it almost seems as if the branches of the trees are long arms with claws reaching across the road to grab me up.  Heavy pulsing greens are everywhere.  If you pause you CAN hear the woods breathing.  You CAN see them growing.

My flowers are tall and full of blooms, the raspberries are abundant if a bit waterlogged lacking their usual sugars, the vegetables continue to grow with each sunny day that follows.

The birds hang tight to their power washed houses and it appears they are surviving as they have chosen their locations well.  Even my osprey family is doing well with two new young birds eating them out of house and home.

There are blossom petals everywhere:  beneath the pomegranate tree, below the long spines of the hostas, and on the bushes beneath  the last of the blooming clematis as each pale purple petal falls.

It has been a strange and rich summer thus far.  Each rain brings a small window of moderate temperatures, but I know these will be followed just a day later by the sauna...that is free.
Posted by Tabor at 6:33 PM 6 comments: 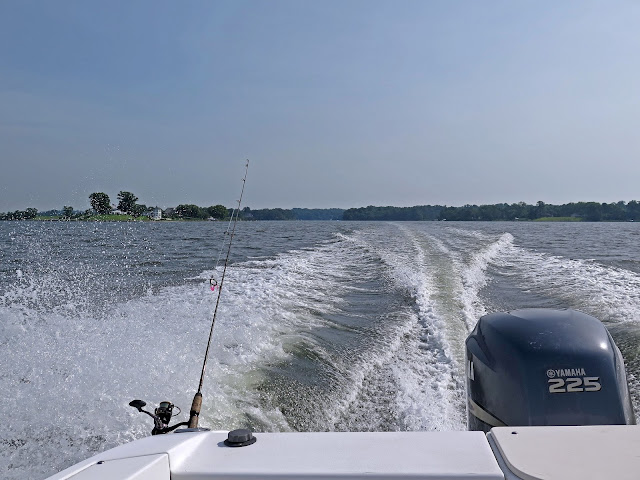 These are the days where you can only stay cool if you keep moving!
Posted by Tabor at 2:34 PM 4 comments: 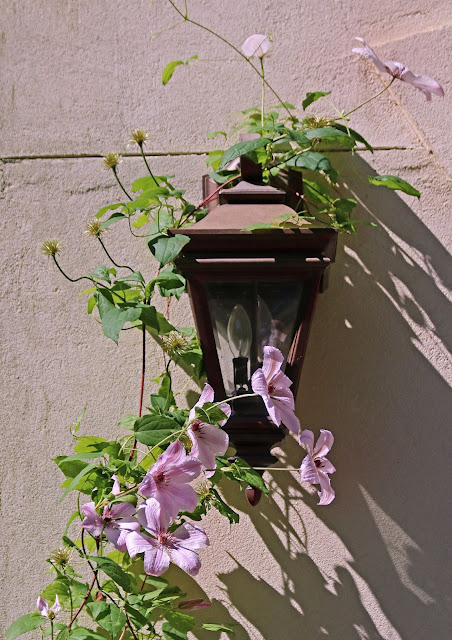 "Francis helps us to see that an integral ecology calls for openness to categories which transcend the language of mathematics and biology, and take us to the heart of what it is to be human. Just as happens when we fall in love with someone, whenever he would gaze at the sun, the moon or the smallest of animals, he burst into song, drawing all other creatures into his praise. He communed with all creation, even preaching to the flowers, inviting them “to praise the Lord, just as if they were endowed with reason”.19 His response to the world around him was so much more than intellectual appreciation or economic calculus, for to him each and every creature was a sister united to him by bonds of affection. That is why he felt called to care for all that exists. His disciple Saint Bonaventure tells us that, “from a reflection on the primary source of all things, filled with even more abundant piety, he would call creatures, no matter how small, by the name of ‘brother’ or ‘sister’”.20 Such a conviction cannot be written off as naive romanticism, for it affects the choices which determine our behaviour. If we approach nature and the environment without this openness to awe and wonder, if we no longer speak the language of fraternity and beauty in our relationship with the world, our attitude will be that of masters, consumers, ruthless exploiters, unable to set limits on their immediate needs. By contrast, if we feel intimately united with all that exists, then sobriety and care will well up spontaneously. The poverty and austerity of Saint Francis were no mere veneer of asceticism, but something much more radical: a refusal to turn reality into an object simply to be used and controlled."    A small part of the Pope's encyclical for June 2015.  No, I am not Catholic nor catholic, I am not even a Christian in clear analysis, but I am spiritual and this Pope is a spiritual poet that has restored my soul.
Posted by Tabor at 3:09 PM 8 comments:

Is this a natural fluctuation or a sign of a problem?  I live in my small world and only see things by comparing season to season and forgetting information at the far end.  I do not have actual data over decades, but even if I did, it would only be anecdotal as my small part of the environment.  Summer is here and I think I am seeing a few honeybees.  In the past I have had a huge collection of pollinators, but never honeybees!  (Below is a bumblebee.) 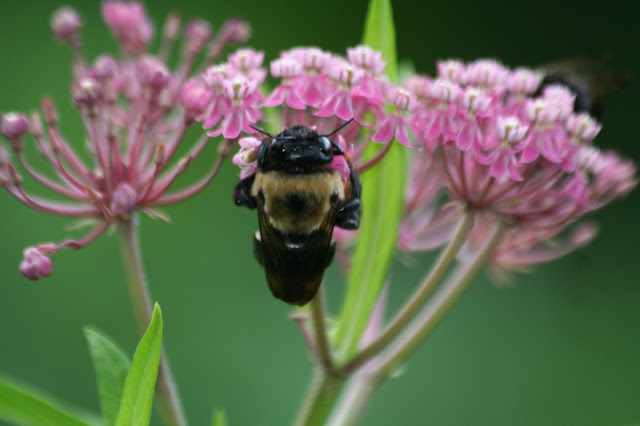 I have lost my bluebirds.  Not a one, when I had half a dozen last year!

Butterflies...zebra swallowtails because I have a couple of paw paw trees for larval food. 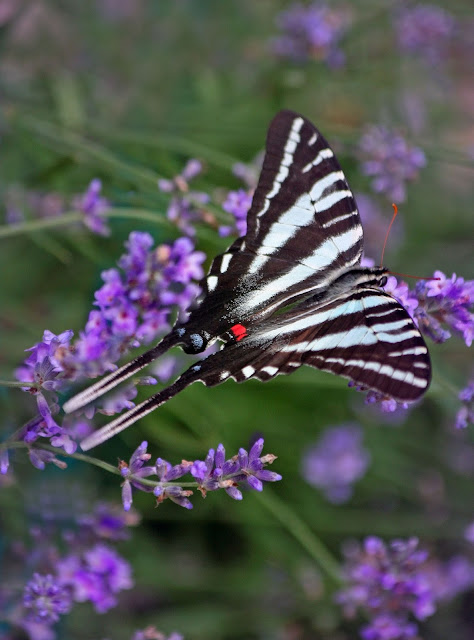 The odd skipper or two and a sulfur and yesterday my first fritillary butterfly.  Waiting always for the rare Monarchs! 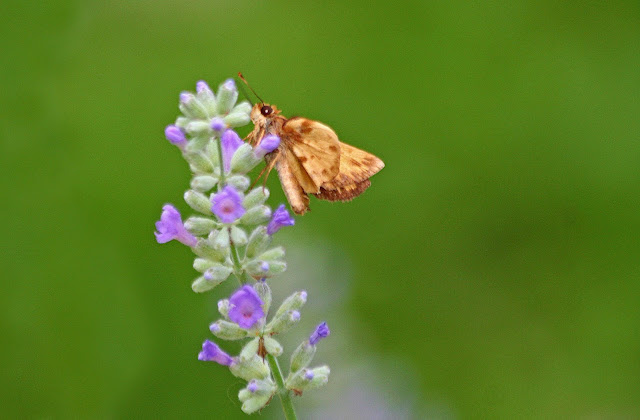 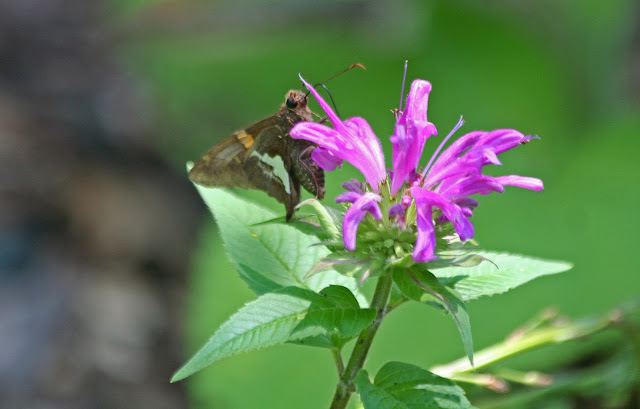 My butterfly weed plants are huge this year, so I do have my hopes up that Monarch will come for the feast... 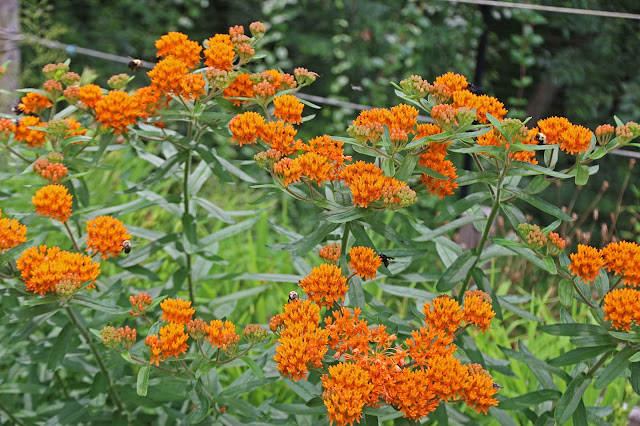 A few facts thatt may be of interest:  butterflies have been around at least as long as 3.500 years;  some, like the Monarchs, can fly 2,000 miles;  9-10 months is the longest lifetime of a butterfly;  many butterflies can taste with their feet and thus know whether the leaf is a good one on which to lay their eggs; and top flight speed is 12 miles per hour!

All that it takes is one angry thunderstorm and we had two and each an evening apart.  I was awakened by the explosions,the  light shards through the windows and then the angry sound of heavy pelting rain as if trying to drive me outside.  We did need the moisture because our weather has been still and hot.  When I go out early the next morning, barefoot, across the grass and return to a place where a tree died a long time ago I see the familiar fungus appearing.  I missed the photo where it looks like little golf balls.  By day two you can recognize them as mushrooms. 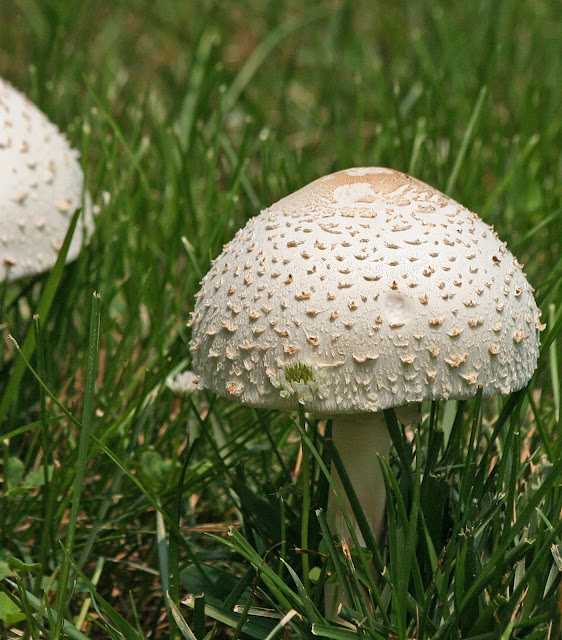 They are easily the size of dessert plates by the next day and look good tasting by day three and they have come up for three years in the same place. 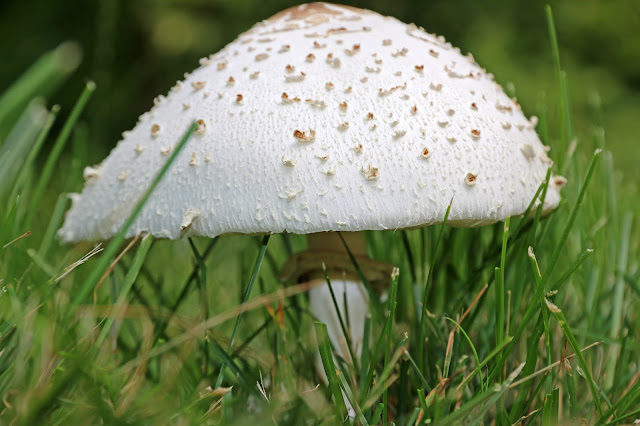 I have observed the squirrels eating them, but only a taste, so I guess they are not all that healthy or perhaps delicious. 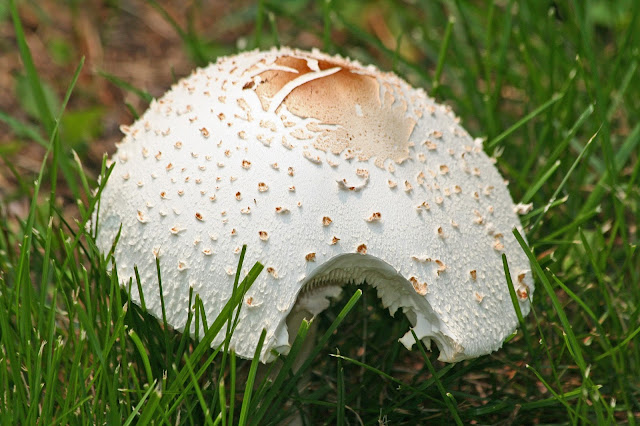 By day four they have become flying saucers. 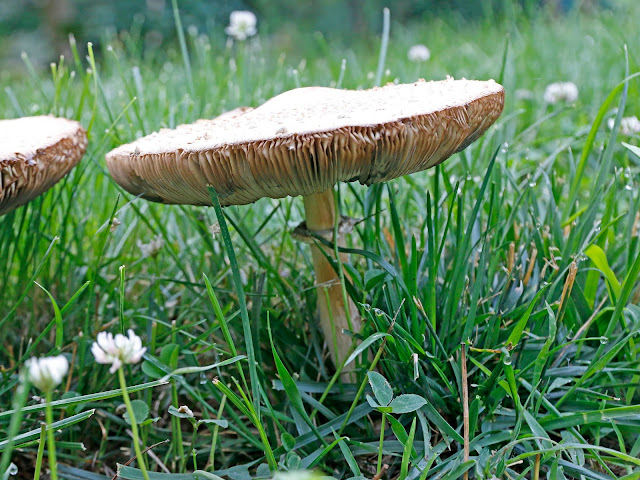 Then by day five they start to deflate like a bad meringue pie.  Soon they are black puddles of stink, and I will spare you that photo!

Such an amazing transition from when spring with its delicate yellows and greens and filamentous shoots dancing against the sunlight in a cool afternoon breeze that flirts and teases and makes you more beautiful than you were... 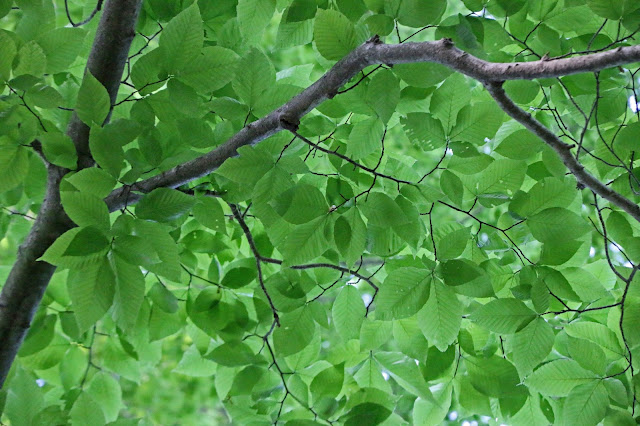 ...can overnight turn into a green monster breathing heavily and pulsing with elephantine activity.  Air that becomes so thick with moisture, just standing in the shade can cause one to perspire.  Air that sighs and wheezes and moves like an animal in heat. 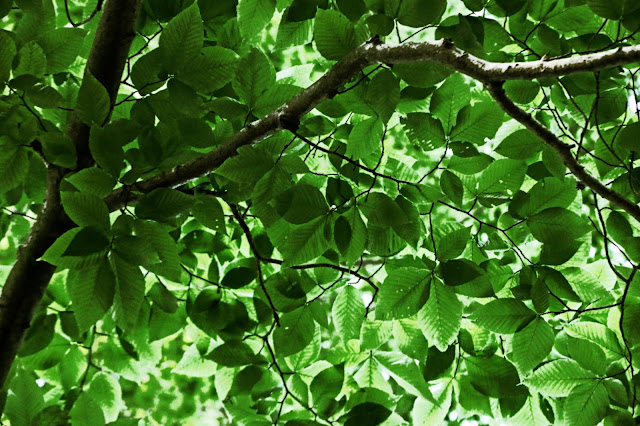 Yes, it is here in all its glory and now I am waiting for the temper tantrums that usually come along...

What a wealth awaited us from our garden upon our return.  We have been eating huge bowls of leaf lettuce for lunch each day, sometimes with cheese, or fruit slices, or nuts or meats.  We also harvest this lovely bunch of radishes.  Who needs French Impressionist art? 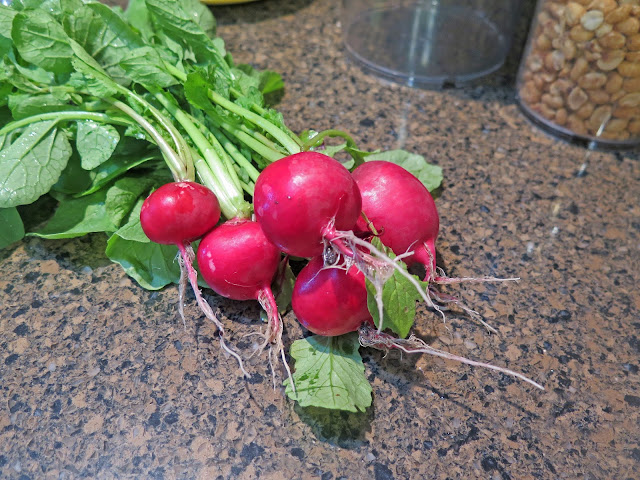 Summer is such a lovely time of year, even when a little hot and humid.  I tend to garden and take photos in my bare feet.  I love the feel of green grass and tend to run across the hot pavement.  It does make my feet spread, but I no longer wear those lovely narrow heels anyway.  Below is what I encountered on my way back through the garage. 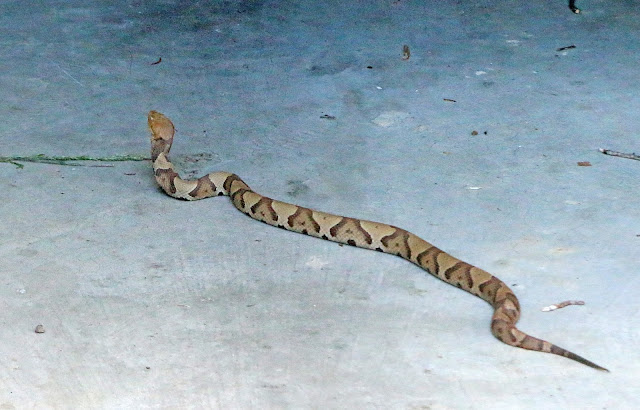 He had just swallowed a medium blue-tail lizard when I snapped the photo.  He was totally not intimidated by my presence.  I thought at first it was because he was digesting, but hubby explained that he had nothing and no one to fear in that garage. 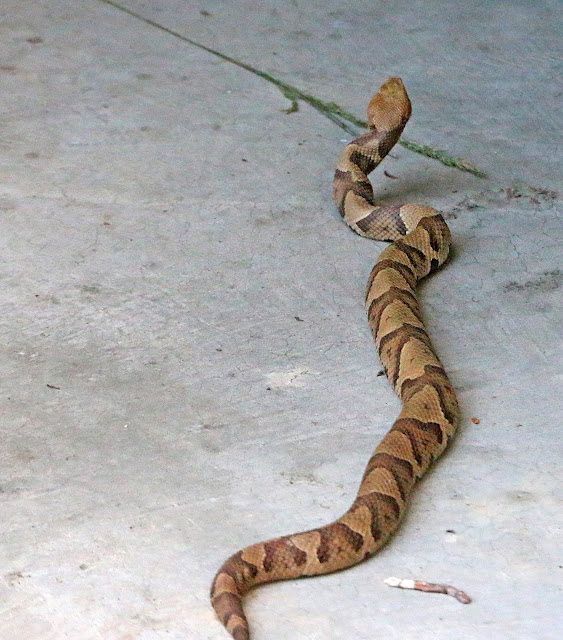 He allowed me to get close to him to take this photo.  Copper heads are not your friend.

Traveling across France from vineyard to vineyard and then learning that I only have a palate for the more interesting whites and not so much the subtle reds.  I like the bold Cabernet from anywhere other than California, Malbecs from Argentina, and Barolos and Sangioveses from Italy...French wine is wasted on me. 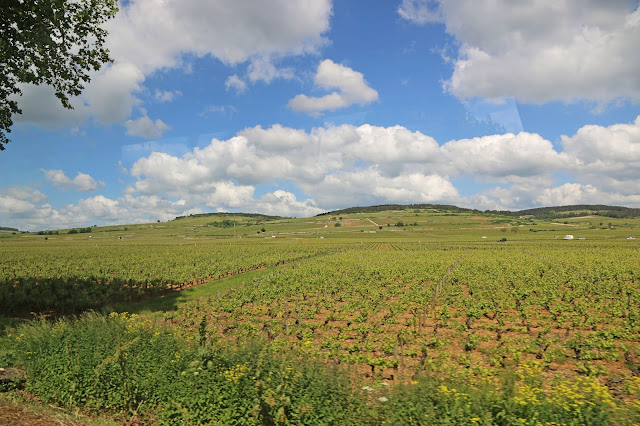 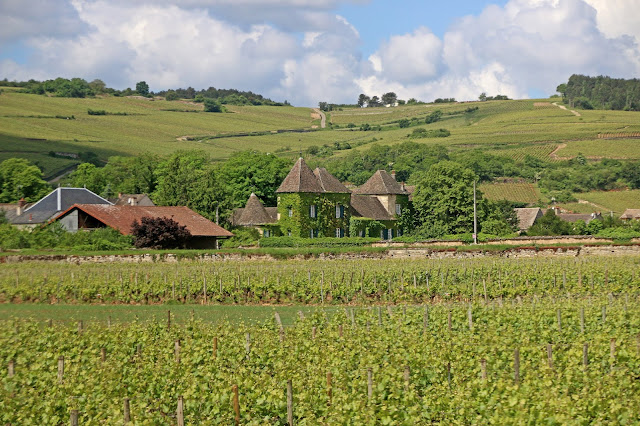 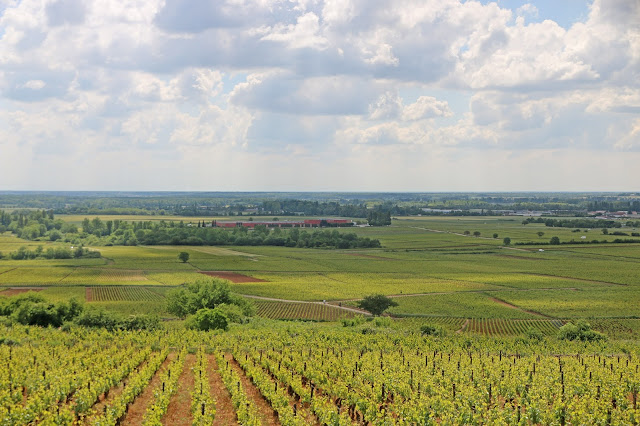 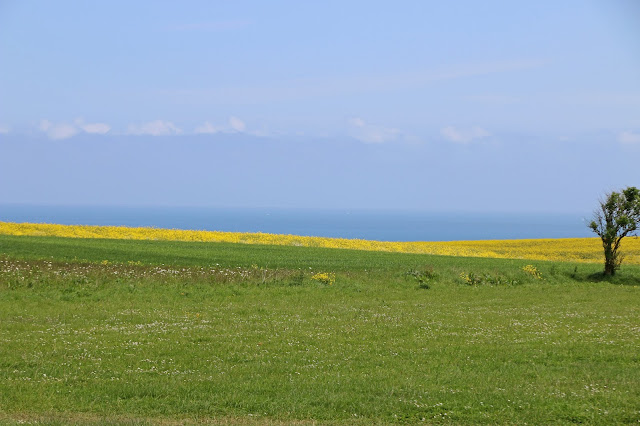 Such a peaceful and pastoral seen.  Canola blooming in the distance and the horizon of the Atlantic Ocean just beyond, a perfect spring day. 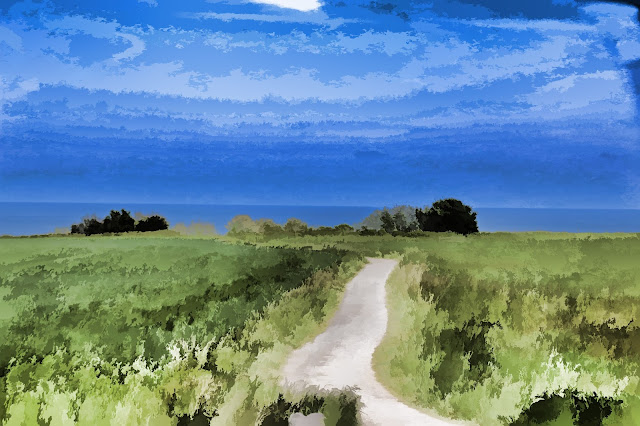 Perhaps this path existed 71 years ago to connect one farm house to another?  Perhaps today it is used for hikers and walkers to stretch their legs. 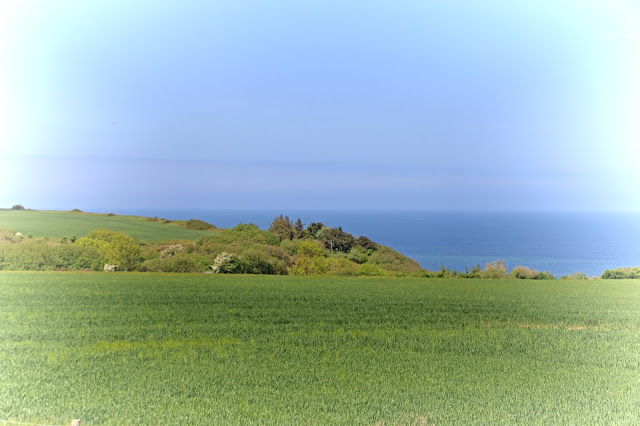 But 71 years ago today this land was filled with explosions and blood and the cry of young men as they fought their way ashore.

That is what it was labeled, and the rock wall and iron gate were too inviting to pass on by. 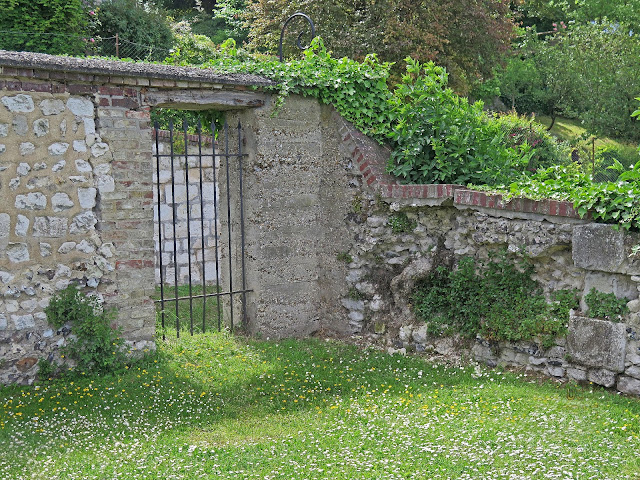 It was a public garden for the tourist and somewhat neglected.  Since we were public gardeners ourselves we had to stop.  Not sure if the plants were all medieval in nature, but still a nice pause on our walk down the hill from the castle. 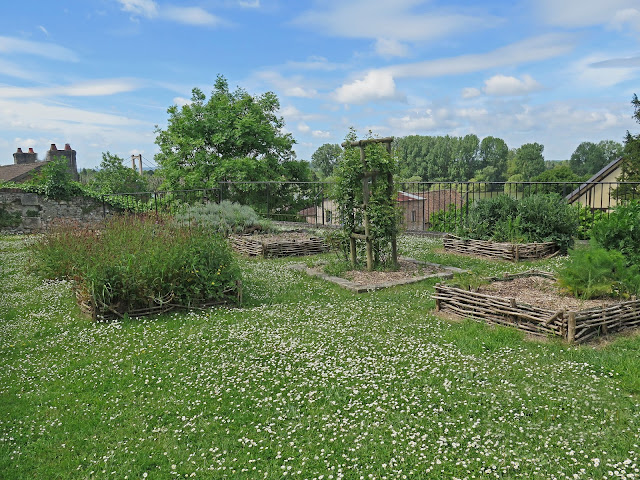 My Impression of Giverney 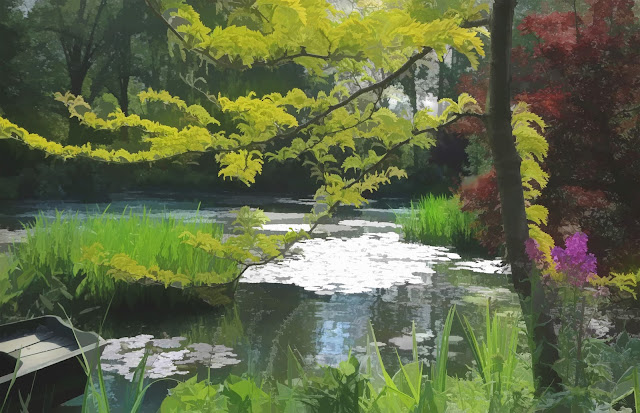