Ever since my little guy has been born he has refused to eat anything green, sweet or sour, textured or not; if it is green, he squinches up his nose and then at this age of 2.5 can now say "No." very clearly and adamantly.

We have all tried to get him to expand his diet from milk and taco chips with some success...but never into the green world. Yesterday, after putting in a load of laundry I decided to visit grandpa (Doc) and Xman out in the garden. 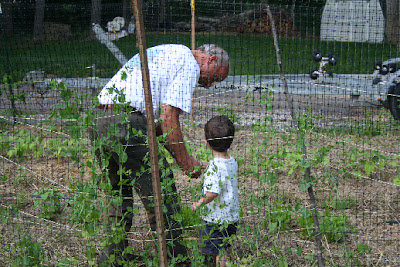 They were both deep in exploration of all the wonder that small seeds and earth and rain transform. Doc said to Xman, "Show Nona what you have." 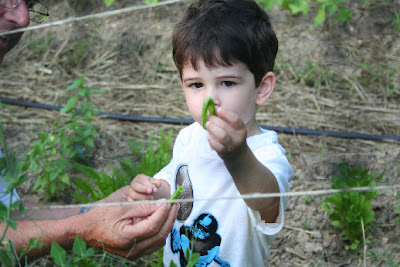 In his small hands Xman lifted that most delicious of green containers, the edible podded pea. 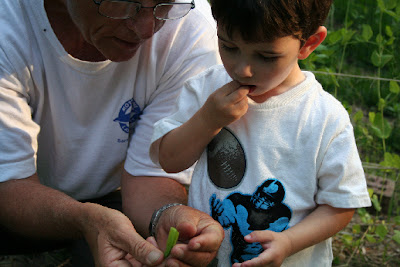 Then he proceeded to let Doc open the pods and take out those green jewels in the middle which he immediately put in his mouth. It didn't take long before he wanted to master the engineering feat of opening them himself and take charge of eating those emerald gems. He is not yet up to eating the pods...but who cares, we had so much fun watching him put away dozens of the peas.