The Wood Witch Loses Her Cool

I do try hard to be a sharing and giving and caring person on this earth.  I have no more right to be here than all the other living things, right?  I leave out seeds through the late fall and all of winter into spring and leave out water year-round for my feathered beauties.  We compost most kitchen scraps and do not mind when the turtles, raccoons, crows and whatever other scavengers depart with some of that stuff.  I let all the bugs eat to their hearts content unless I feel the plant is losing the battle.  I plant natives as much as possible so that the life cycle of local living things can both eat and lay their eggs.  While I might spray with something, it is on very rare occasions and with something less toxic.   I am a peacenik. 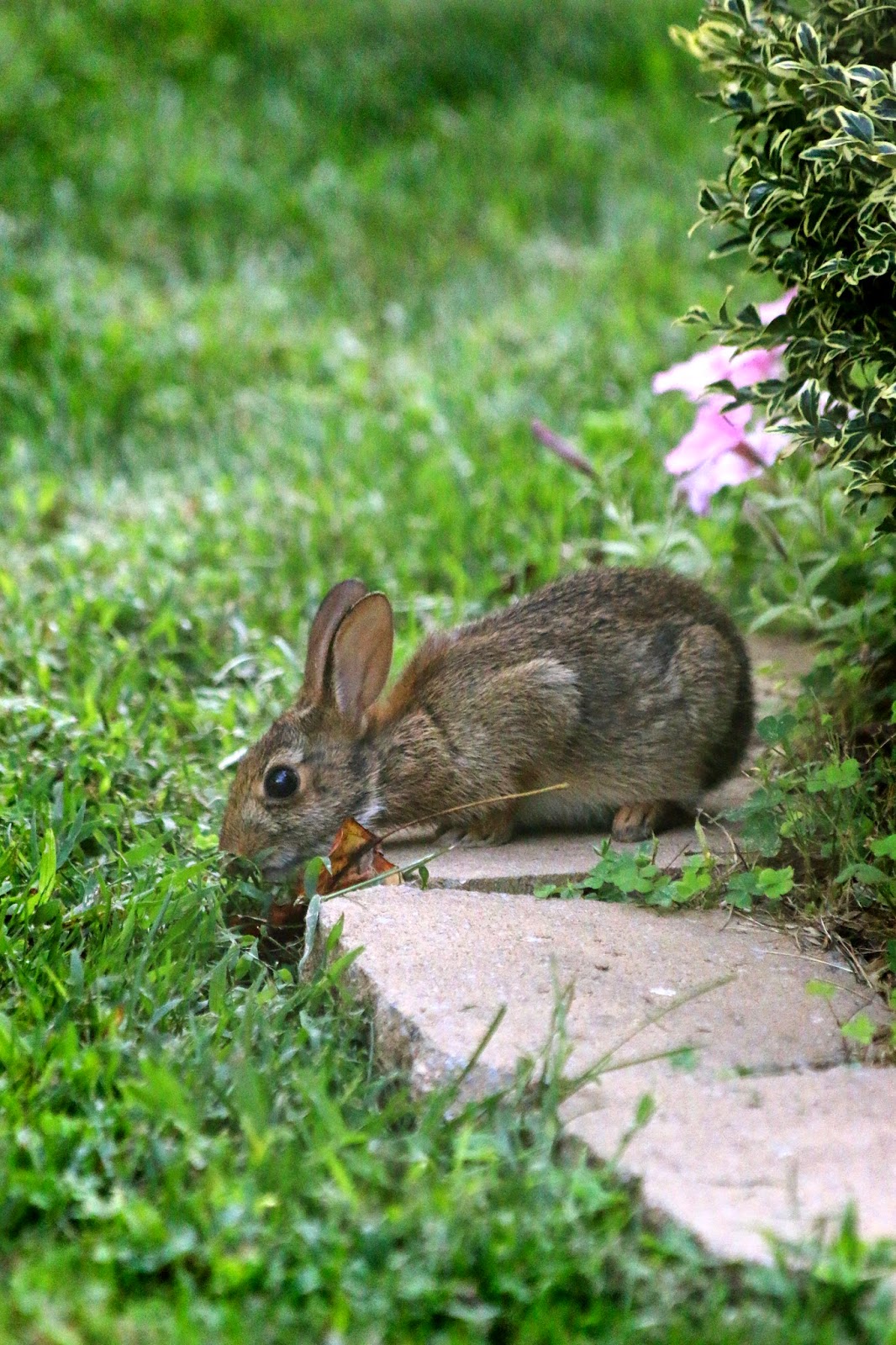 The other day I was weeding and out of the shrubbery bounced a small, young rabbit.  He paused at the edge of the brick edging and looked up at me with the most pitiable look.  I knew he was thinking. "Don't move, she can't see you...oh hell, she is only two feet away, OF COURSE SHE CAN SEE YOU!"  He put on his little baby face and opened his big brown eyes.  I talked to him softly and in my best rabbit whisperer voice asked if he could stay out of the flower bed and just eat the clover which was taking over my lawn.  He paused, seemed to smile, and then disappeared across the lawn into other shrubbery.  I turned to continue weeding and that is when I saw he had eaten HALF of my liatris stems almost down to the bulbs!  They had long ago finished their lovely purple fuzzy blooming, but now the bulbs were feeding for winter and he had stolen most of their dinner.  Ugh! 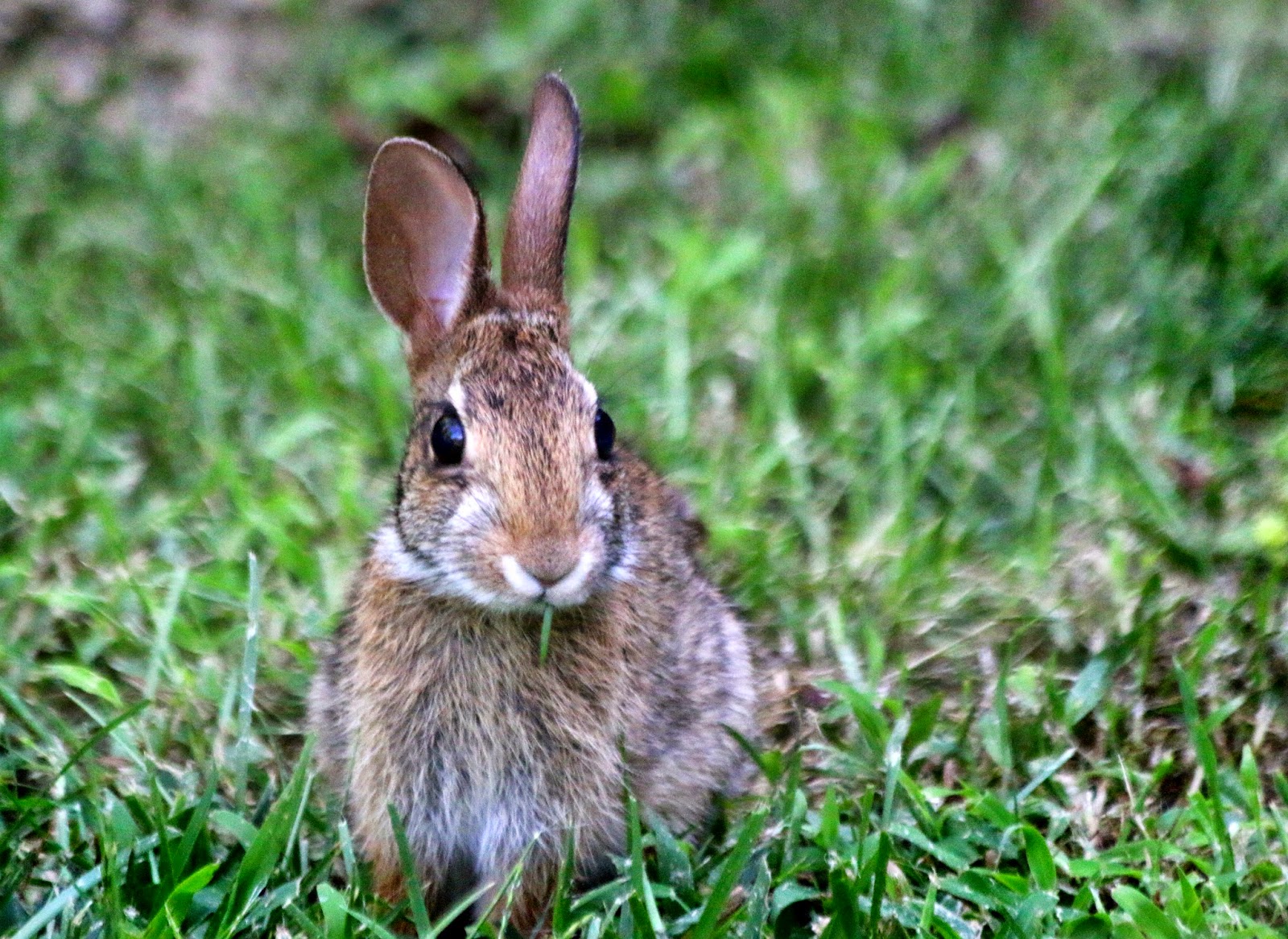 A few weeks later while sitting in the shade waiting to get a photo of a hummingbird (which Hilary more than put me in my place with her photo), I saw a gray-brown shadow out of the corner of my eye slowly making its way to where I sat on the low stool.  Since I had not chased him last time, this time he just watched me with my camera while he ate his afternoon snack. 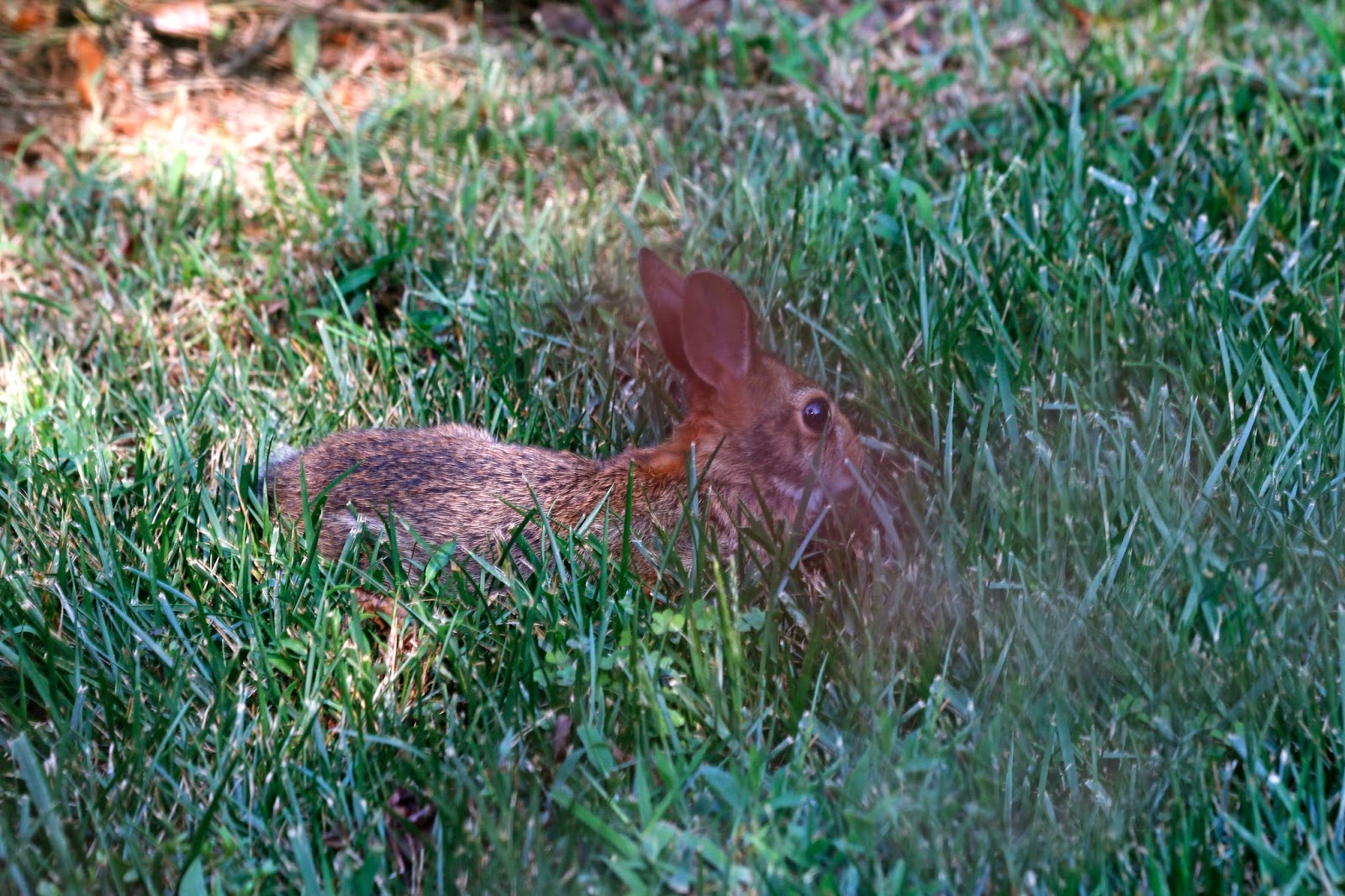 He even felt safe enough to lay down in the cool grass and meditate for a while. 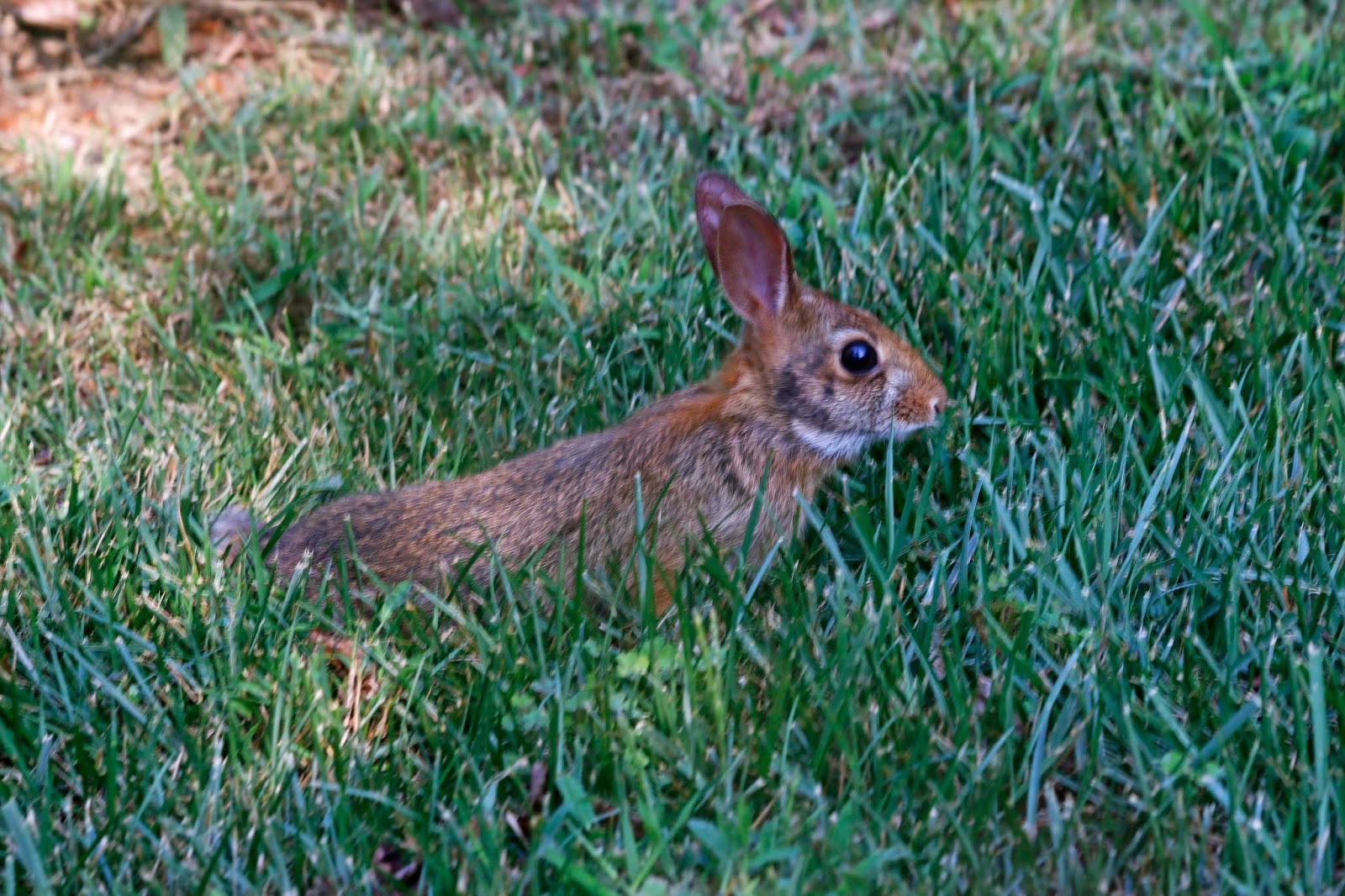 It was the nearby caw of the crow that brought him sharply upright and I am guessing that he knew angry crows meant nearby hawks and he scuttled off under the pyracantha. 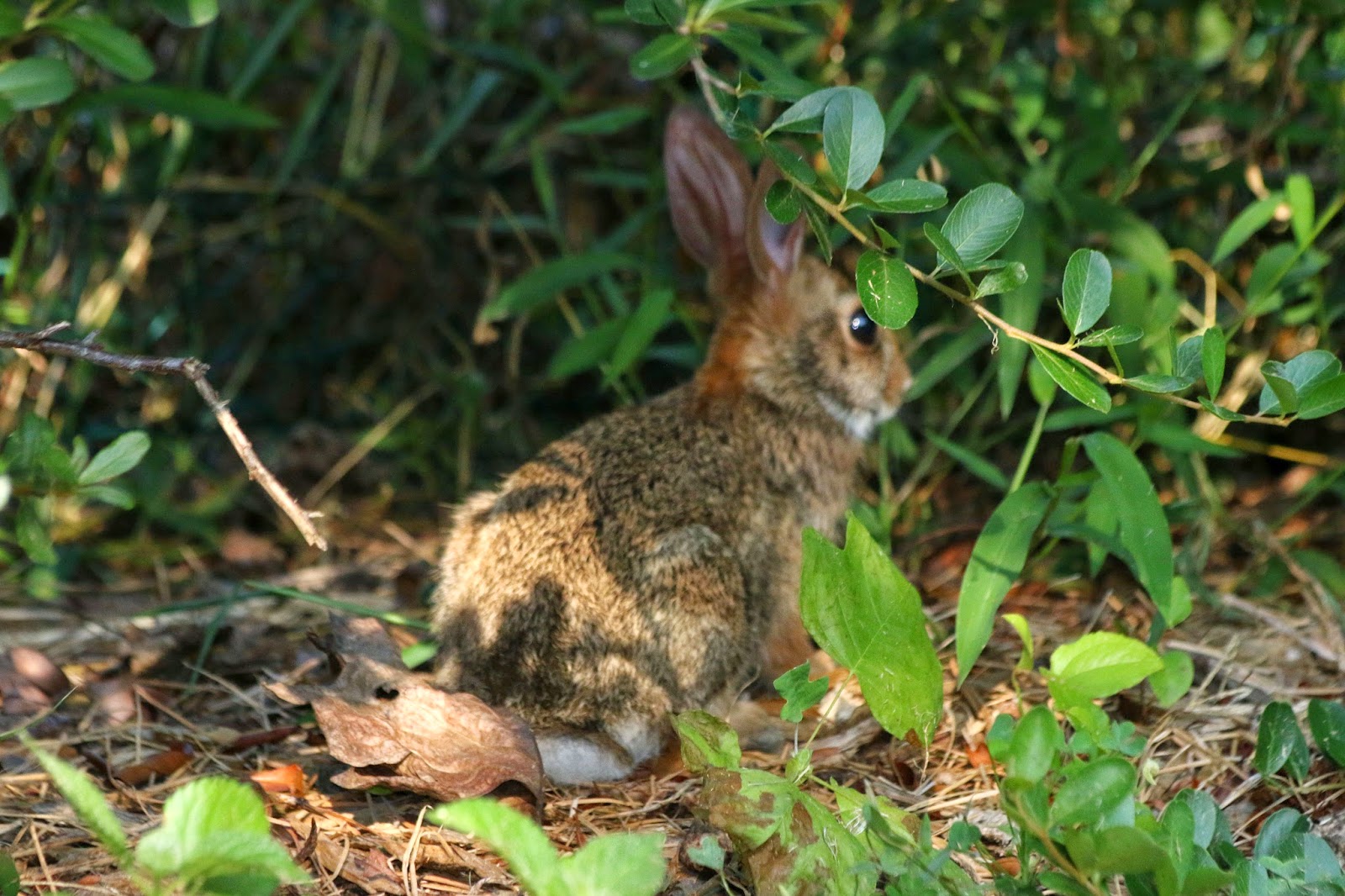 It was not until days later as I was walking to my front door (camera in hand as always) that I saw him right at my feet looking intensely at my toad lily plant.  If you look behind him you can see where a few of the stems have already been cropped. 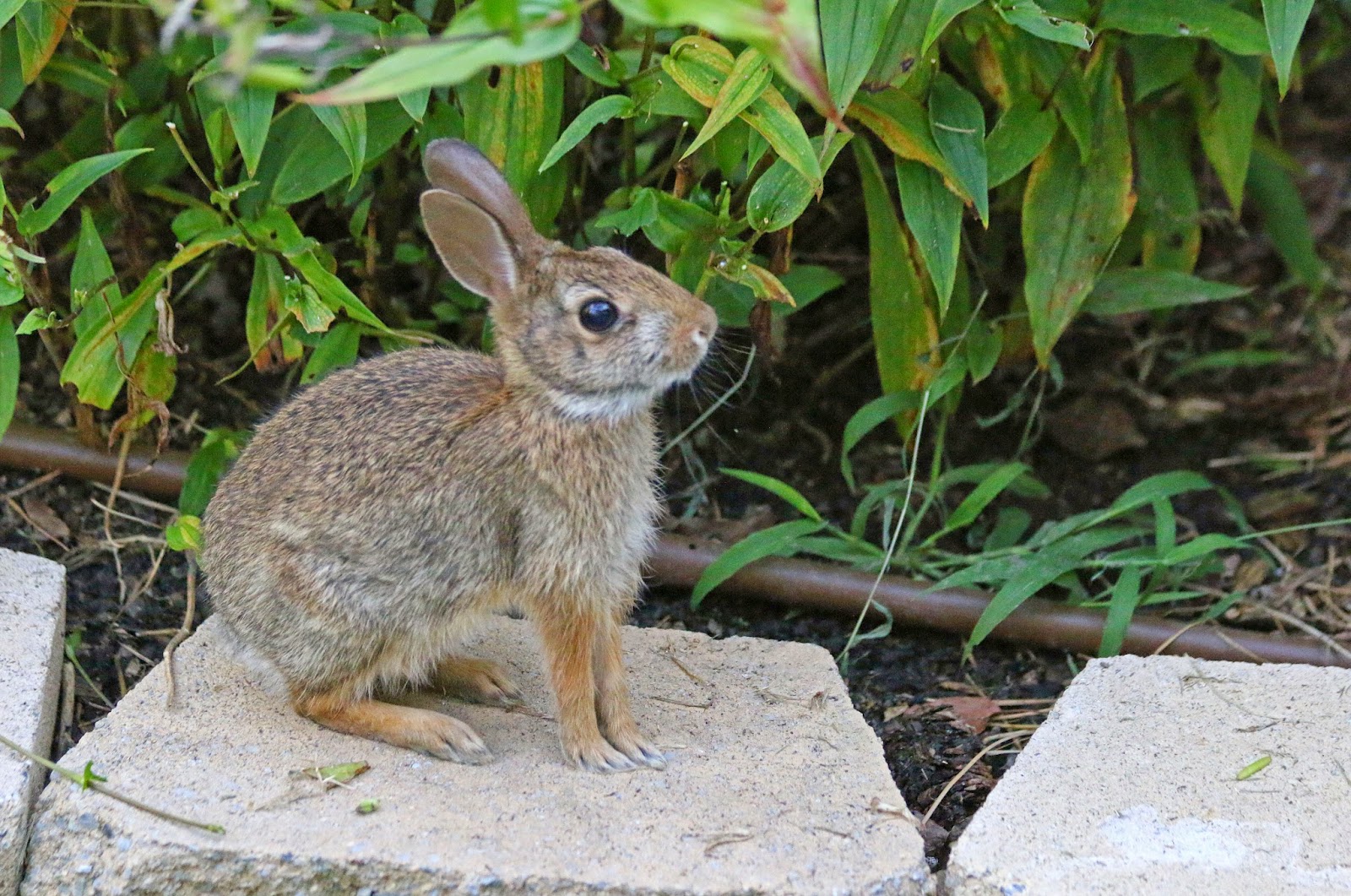 He was not worried about me as he clearly began to chew off on of the lovely stems with lily blossoms! 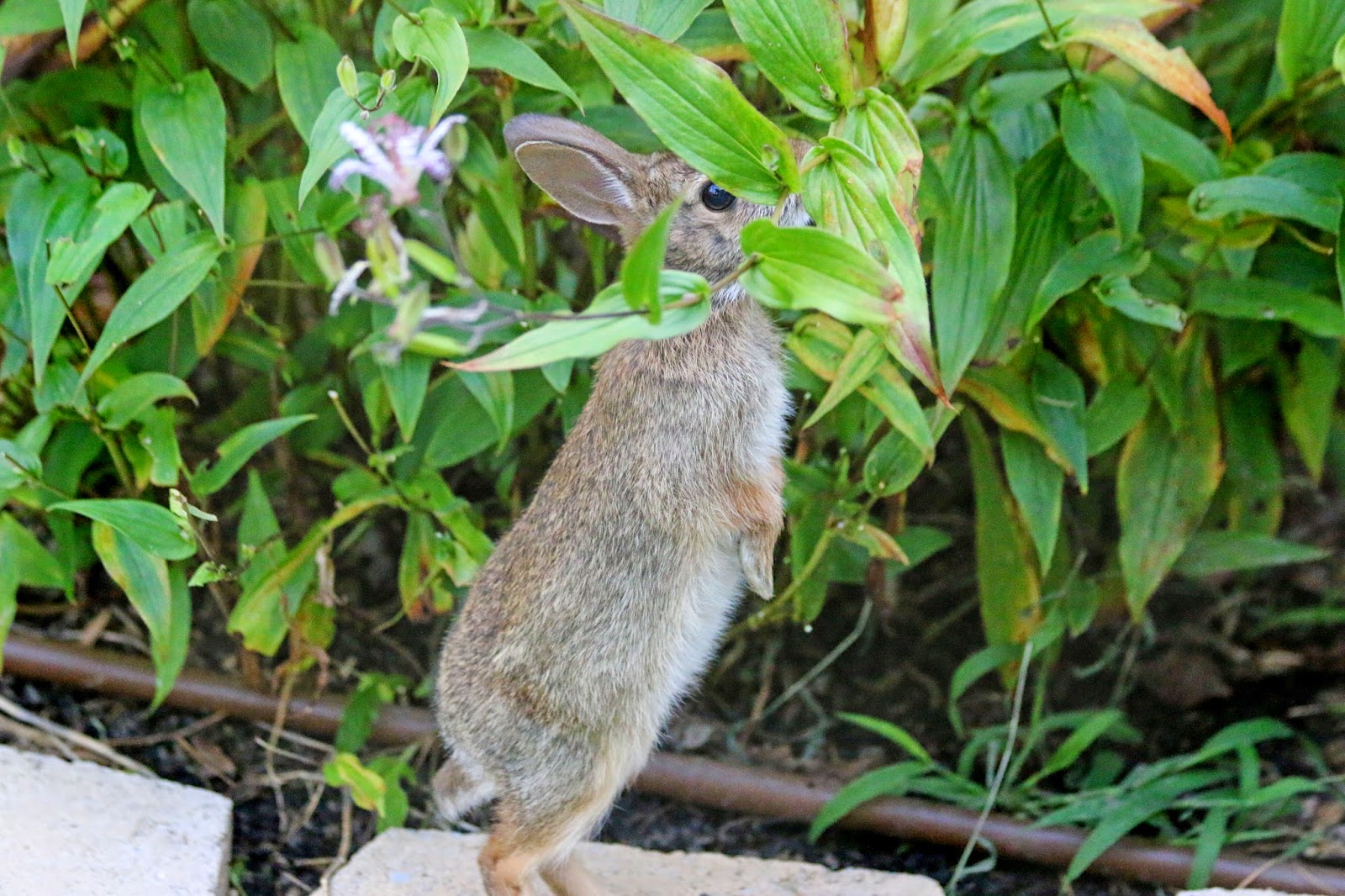 I am afraid that is what threw me out of my peaceful "wood-witch one-with-the-planet" mood.  I threw out my arms and went screaming toward him.  His survival response was good and I chased him down into the ravine calling out witch curses all the way.  I haven't seen him for days, but I know he is watching, waiting for me to go on my upcoming trip when it will be vacation time in the yard once again.
Posted by Tabor at 7:01 AM