Let Me Take You on a Five Hour Trip

A bit long of a post, so put your feet up.
Summer is finally releasing its grip on my area. The weather is in the 80s and not the 90s F.  So when Hubby suggested a trip to a park about 20 minutes from the house, I was amenable.  He had put the canoe on the top of the car weeks ago and every time we thought we might head out, the weather changed for the worst including storms with tornadoes followed by a hurricane or two.  Most of them bypassed our area, but we still had canceled our trip to be safe.
First a little history of the area where we canoed.  Families from Brittany in France immigrated to the area in the 1600's.  Their traditional language was Breton and therefore the Bay we canoed is called Breton Bay.  There are a few Breton Bays in America.  This one has a lovely long and protected coastline and a river before it spills into the ocean.  It was first "settled" by the Catholics followed by British settlers who purchased land for their first official settlement from the Yaocomico Native American tribe.  This area has a rich complicated history.
The day was calm, only slightly humid with the promise of hotter weather by mid-day.  We arrived at 9:00 in the morning and were able to quickly load our backpack with lunch, our two paddles, our small cooler with drinks, my camera bag, and our life jackets.  The canoe was not full.
My husband takes great pleasure in pulling that first stroke which "frees" us from the earth for most of the trip.  Weeks of rains had kept the growth green instead of that sage color that arrives in early fall.  So all the plant life was thick and abundant. 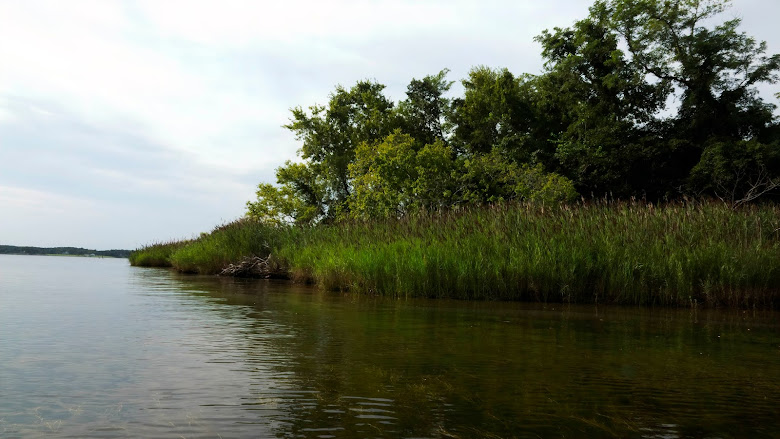 The curves of the shoreline made it easier to sneak up on birdlife.  They had finished raising their young and now seemed most intent on getting fat for winter. 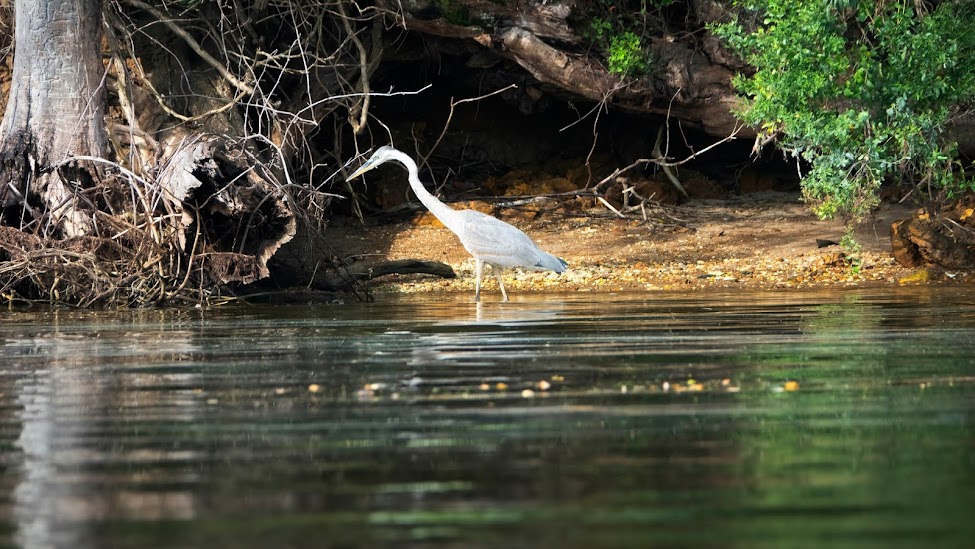 There was an abundance of white perch of all sizes and lots of recently molted crabs hiding for safety.
We passed the time easily, hubby catching small perch for our crab traps and me looking for good photo opportunities.  In two hours we were ready to stretch our legs and eat our light lunch.  Up ahead was an empty beach with a nice floating dock that had broken loose in the storm and washed ashore...a perfect lunch table/chairs!  ( I will not describe in detail how hard it is to get out of a canoe after two hours when you are in your 70's.  Thank goodness no one was looking) 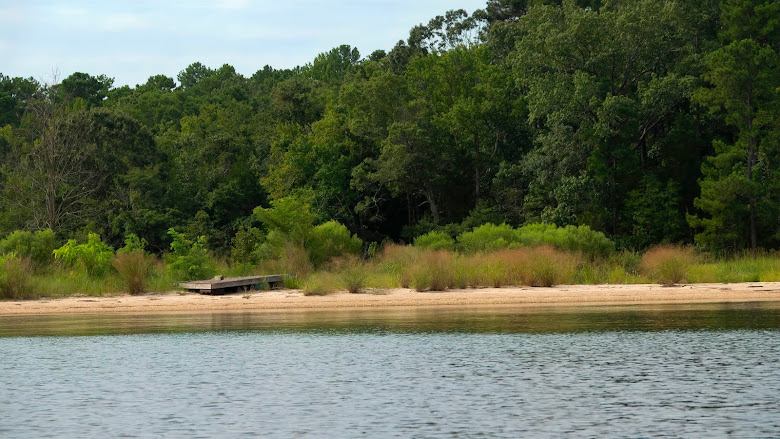 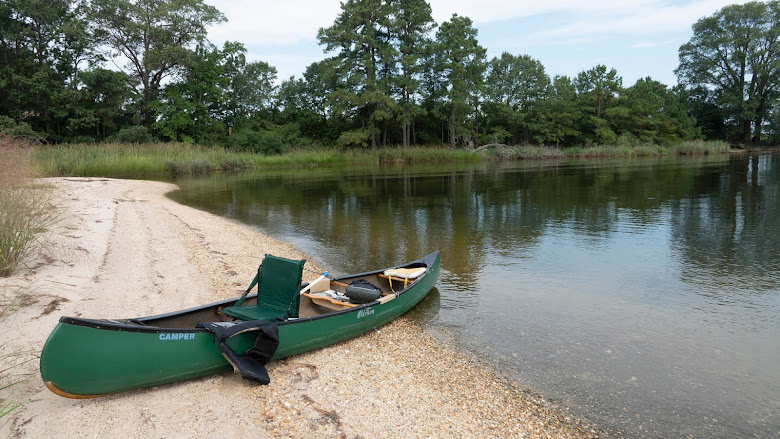 We are always thankful to have such a luxurious place to stop and listen to the quiet as we enjoyed our sandwiches and fruit.  Sometimes we beach comb or look for unusual native plants.  We are a most boring couple.  When we finished eating we noticed there was a small inlet behind the beach, and of course, perfect for us to explore with the canoe. 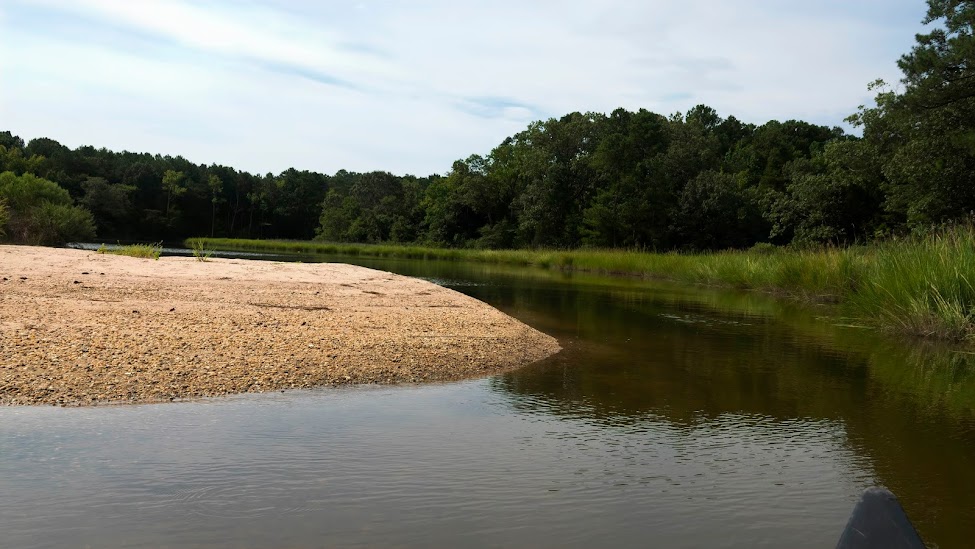 It was hard to accept that this area had been part of serious naval warfare against the British in the War of 1812 which pretty much crippled the tidal economy of oysters and crabs being harvested and sold.  The British "plundered" the area at that time.  It makes me realize that things here and now could be worse. 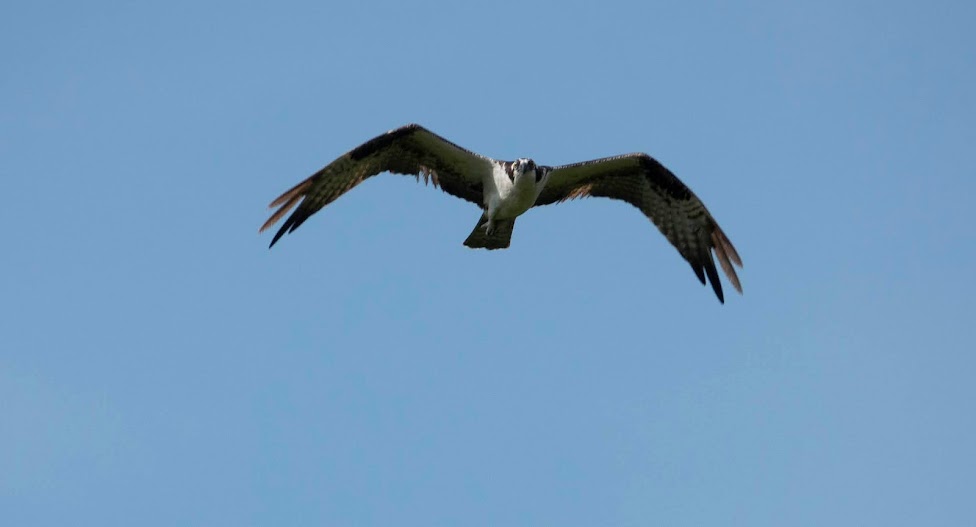 A lone osprey flew from his perch as we entered the inlet.  Most of the osprey are leaving this month and heading south, but I was able to see a least a half dozen on this trip.
Well, I am sure you need to stretch your legs by now.  Next post I will share some fun birdlife that excited me as we enjoyed the second half of our paddle.
Posted by Tabor at 11:04 AM