Since You Asked and I am Procrastinating on Food Shopping

Here we go on Part II of that canoe paddle.  I was pleased that many of you found this Mallow Bays/Potomac River trip as interesting as I did.  A canoe is confining to the muscles but so freeing in how you can cruise about on an afternoon into tiny places so silently that even wildlife accepts you.  We did encounter two couples of kayakers and exchanged pleasantries...but those who are out for an afternoon of water sliding are usually not out for an afternoon of conversation and small talk and we quickly went our own way. (I think you can see the kayaker below in the distance.)  (If you want to know more about Mallows Bay you can Google it or go to the link in my prior post.)  As always you can click on photos for a bit larger view. 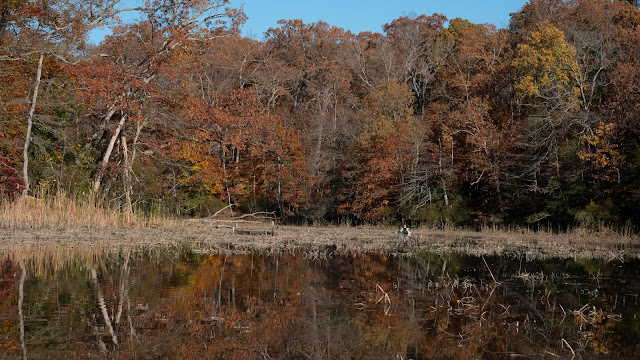 Bay waters were at low tide, so much of our moving met dead ends in the marsh.  As we decided to head out to the wider river we found that the only way out was to disturb several Cormorants, commonly called shags, in some areas.  They are the ones that are trained in Asia to fish.  Some have blue eyes.  They have webbed feet and a throat that can expand to a pouch. 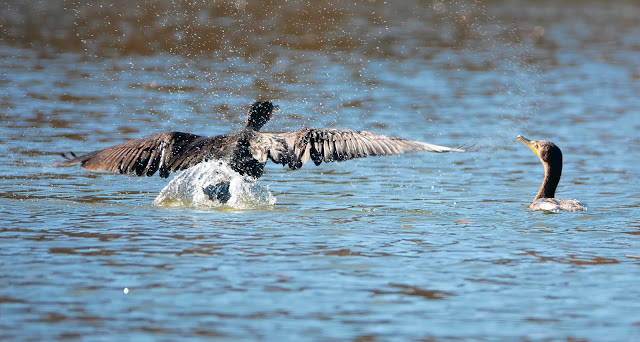 The old wharves of the bay have decayed into beautiful abstract gardens that get even better in the fall. 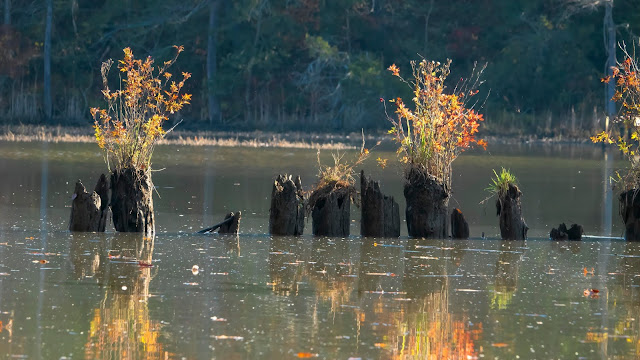 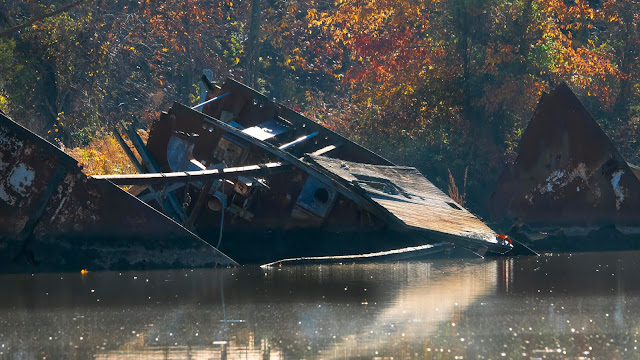 There are only a few boats that sit high enough that you can see some structure and remnants of their grand old days.  Each year they seem to sink a little more. 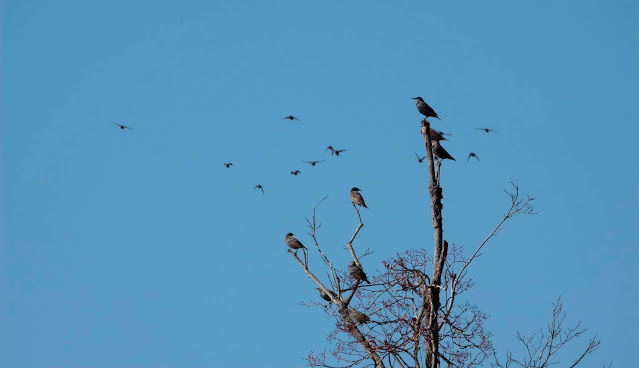 The starlings were moving in.  Most people hate these invasives as they damage other bird wildlife and displace them.  Someone introduced them from Asia to Central Park many years ago and we all regret that, but you can find their air ballet throughout the Internet.
We left the harbor entry and headed toward the bigger part of the naval graveyard. 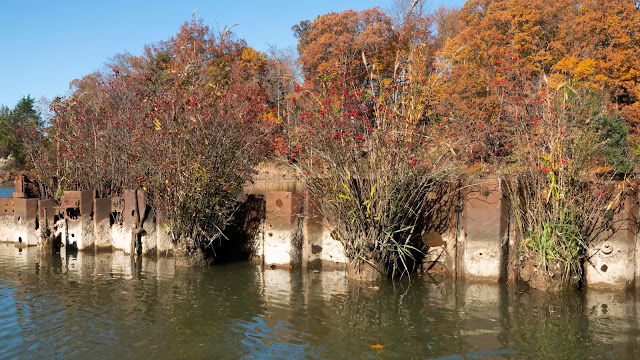 Only metal bolts protrude above the water in most of the area, even at this low tide.  We were careful but also found the birds fun to photograph as they staked their claim to parts of various wrecks. 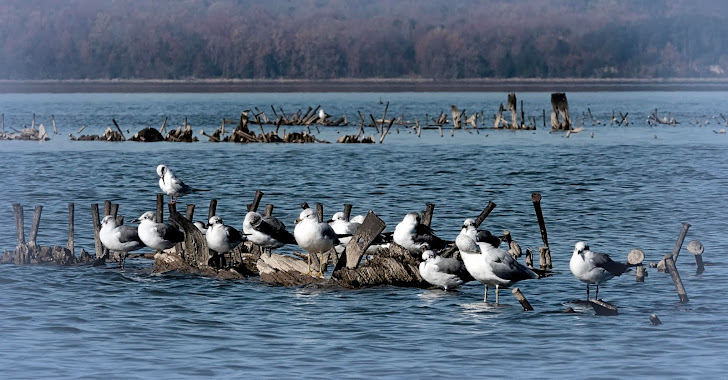 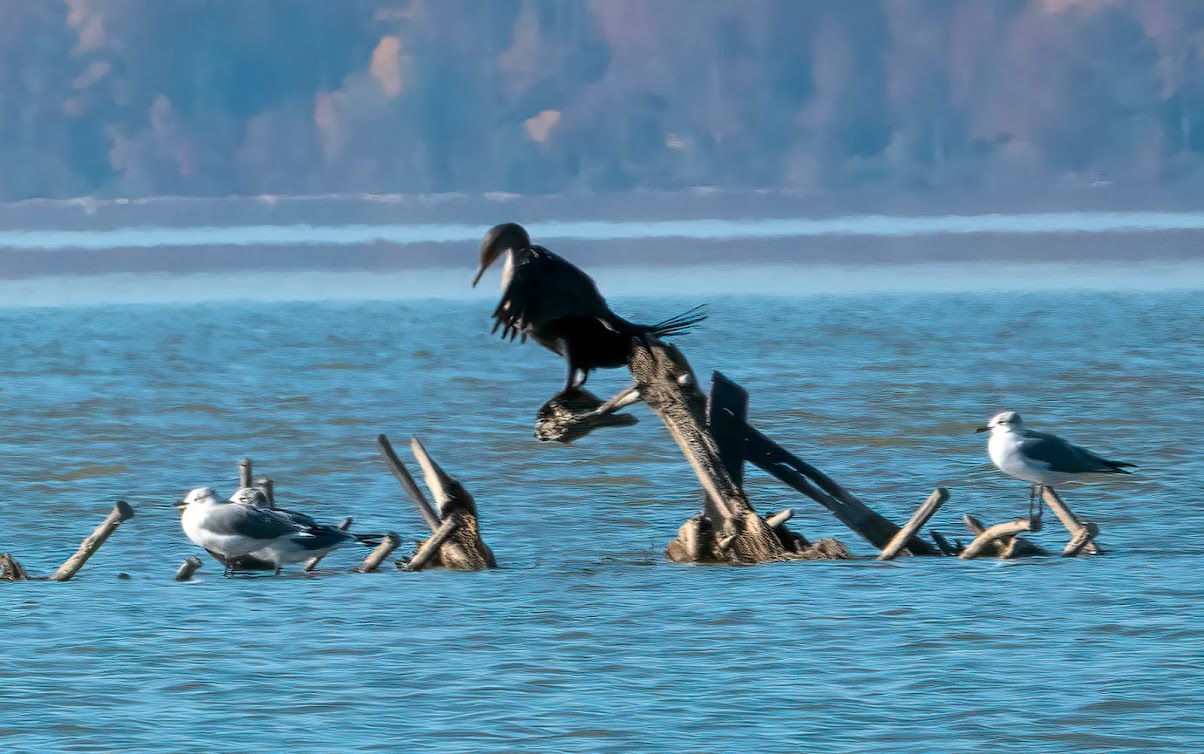 My husband was the first to hear the call of the white swans in the distance.  They were on their migration path from up north and rarely seen in such large groups for any length of time here.  If you squint you can see them in the distance.  I like the way the colors of the woods and sky in this photo look a little like an old painting.

There is a place down in some southern states where swans winter over and we once visited there and I want to go again postCovid.  It is a muddy area and hard to get to and requires a 4-wheel drive, but fun to find them all together.
Well, once again this post has become longer than I expected.  I guess I will have to save the water dogs, beaver dam, etc. for another time.
Posted by Tabor at 12:10 PM