You Have to Kiss a Lot of Toads Frogs 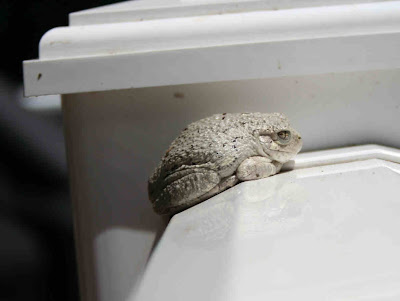 Perhaps some of you will remember my little tree frog that visited the house last year once we had finished the deck? I went outside early in the morning today and leaned on the deck railing to scan the river when this little fellow caught my eye to the left and sort of startled me. The expression on his face pretty much sums up his feelings on my being out and about so early in the morning moving about in his territory. He looks exactly like the the frog (which I have name Harry for obvious reasons) that I encountered last year. Except this guy is a little larger! Do you think he is the same fellow? If so, where did he winter over? He sat out like that for hours as the hot sun started to beat down on the deck. About ten o'clock in the mid-morning I was moving the lawn hose to the back yard to water and after I got the sprinkler exactly where I wanted it, I noticed the outside sweep of the sprinkler started to hit the top of the deck railing. When I looked out the window again, below is what I saw. 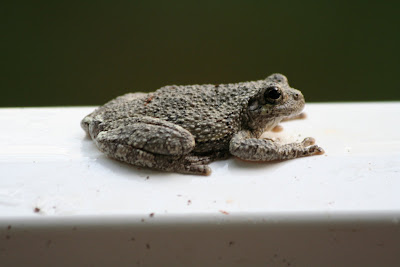 Now that he was soaking wet I just knew that he must love me even more. Eventually as the day wore on he disappeared. My instincts told me to look for him as I knew he could not have gotten far. Since he is probably a Prince in disguise he is not going to leave the Palace. 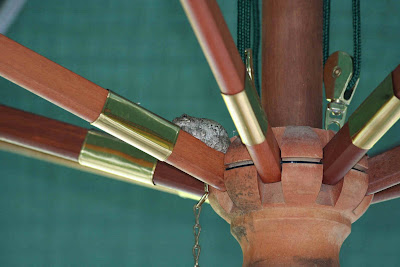 Ah, yes, it IS the same fellow as he is back in his favorite hangout as last year. Certainly makes himself quite at home. Do you suppose he wintered over in this umbrella with the bird nest with eggs that I discovered when I opened it up early this summer? The weathermen/women (those 50% right weather predictors) are predicting gusts of wind up to 14 miles per hour toward evening...and I have to leave the umbrella up as I head back to the apartment. I am too squeamish to try to grab him and move him!