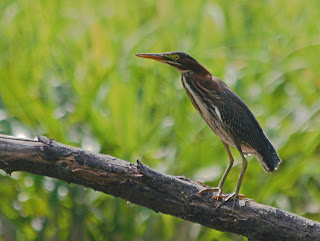 We were in the canoe and paddling our way down a thinner and shallower branch of a new river between high grasses. The air was heavy with moisture and all was quiet except for the whistle of a distant osprey high in the sky and the tiny buzz of some marsh insects. The marsh grass was closing in and hid the view that was going to appear around the bend. I guess it was too warm for bugs to be biting to distract our attention. 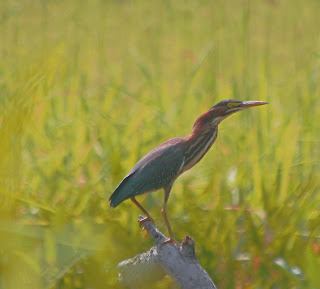 Hubby saw this lovely green heron before I did and slowed the canoe ever so carefully so that we could coast closer for a better shot. The photos are not as good as they should be, but that is because I was too busy studying the bird and not focusing on the shots! I probably had the wrong camera setting and that is why I am not a professional! The bird surprised me by not flying away as we paddled even closer. The larger herons in our area are very wary. He flew to another nearby cross branch and then stretched his neck as shown in the photo below almost as if to see if another canoe was to follow behind us. 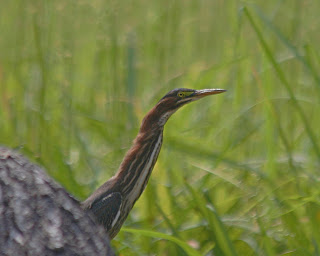 He was elegant and I thank him for waiting a little while before he flew on over the marsh grass to greater solitude.
Posted by Tabor at 5:03 PM