The magnetic poles are changing and maybe even flipping. That iron core is stretching and tilting. This is already affecting the technologies that humankind has created and is using.  The geologists say the last time the poles flipped was 750,00 years ago and they did not see any effect on life at that time from the review of fossils.  They actually wrote/said that!  750,000 years ago?   The earth is millions of years old.  What life was on the planet 750,000 years ago?  Did algal cells migrate at that time and reveal no change to their homeland?

Is this going to affect the migration of our water birds and skew their biological maps? It seems as if the powers that be are taking an index finger and swirling time and space and creating chaos putting humankind on edge and perhaps swirling all of earth's kind into some tumultuous trip?

Today the geese (visitors to my home) did their regular march down the river in the early morning. They march in lines like good soldiers and usually remain quiet unless they see a fox...or me.  Then there is much arguing about what to do and where to go, swim to the far side or burst into the air? 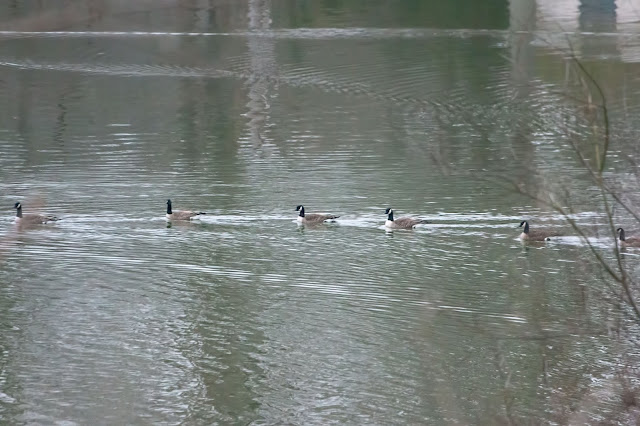 The Canvasbacks came in later and also stuck to the middle of the river. They seemed more relaxed sometimes pruning themselves as they paddled upstream. 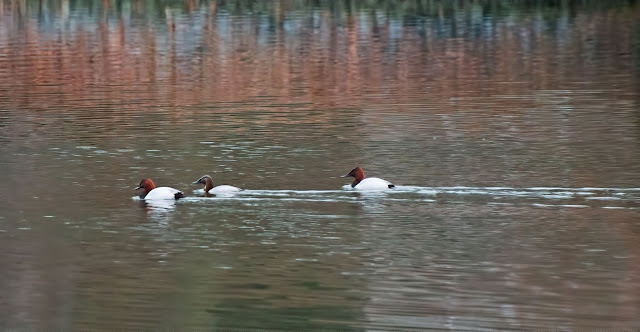 These photos are oversharpened because they were most wary of my presence on the dock and far away.  The Canvasbacks have a shovel of a bill.  They are a diving duck eating algae and crustaceans. 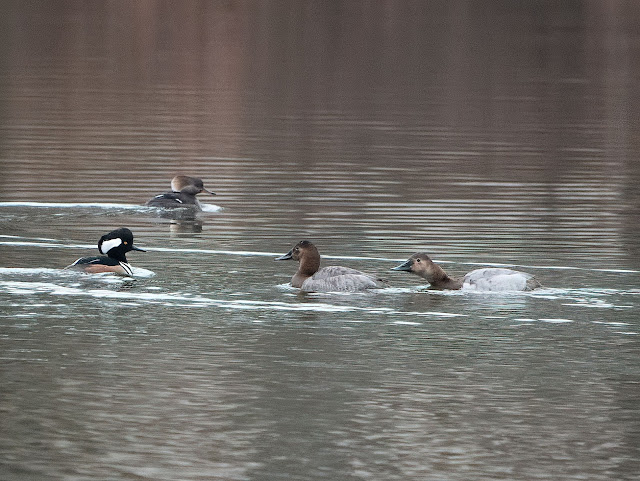 Then came the Buffleheads paddling in from the opposite direction. They gave no ground.  I was happy to see a male and a female.  The Bufflehead’s breeding range is limited by the distribution of Northern Flickers, which are their main source of nesting cavities.   They eat bugs, crustaceans, plant matter and even clams and snails in winter. 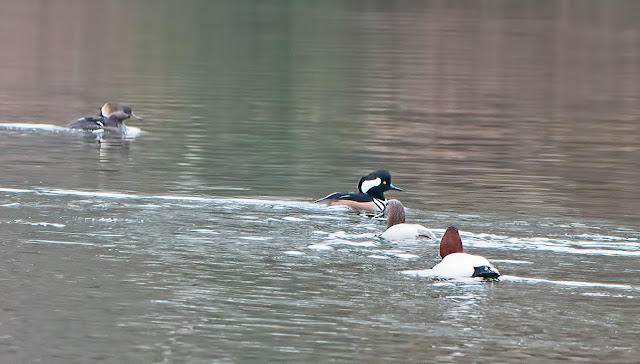 The male almost left the female behind in his bluster to move around the larger Canvasbacks.  The Canvasbacks seemed a bit impressed with his fancy dress which is his mating colors.  I am looking forward to data on their migration patterns in the years ahead.  Of course, it will all become even more complicated as Climate Warming moves or erases their normal breeding areas.
Posted by Tabor at 11:06 AM