I think many of us find renewed energy in spring because it reflects beginnings. After months of stasis before a warm fire, if you live in an area with no skiing, it is nice to want to move again and to move outdoors. Each morning I get up and make that first cup of coffee and go stand by one of the many windows that look out over my yard. On one particular morning at the end of April, I saw this fellow in my front yard. 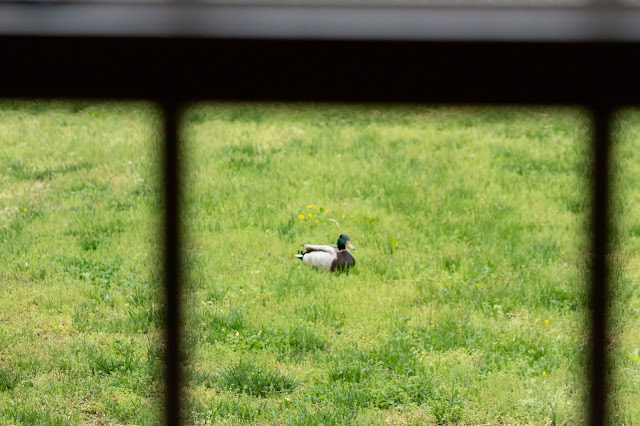 He was just sitting there. We sometimes get Mallards in the swales beside the street at the far front of the yard walking along the wet ditches, but they do not usually stop in the yard itself. We also have a deer fence that keeps most rodents out, and I am guessing he came through a small space at the gate near the riverside.  I looked some more and saw this.  (Photos were taken through a screened window so pretty blurry.) 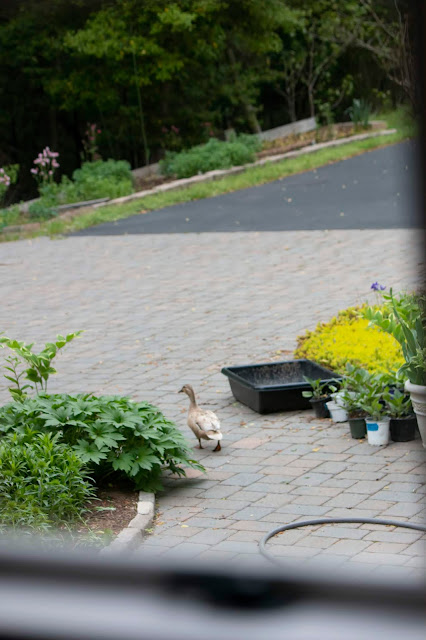 Her taffy color, instead of the mottled dark and light browns that are usual, makes me think she is the progeny of the lone white duck that paddles along the shoreline of our river. Mallards have been known to mate with other types. It was a nice morning and maybe they were just poking about. I was curious to see if they were going to eat some of my plants! 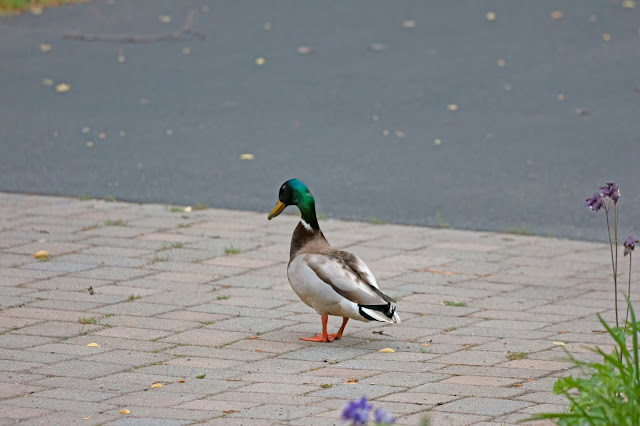 Finally, he got up to join her.  They proceeded to continue to survey the yard and I was beginning to think they were in nesting mode.

Then she walked over to my lilies and hopped up into the lily bed and disappeared into the green, confirming my theory. 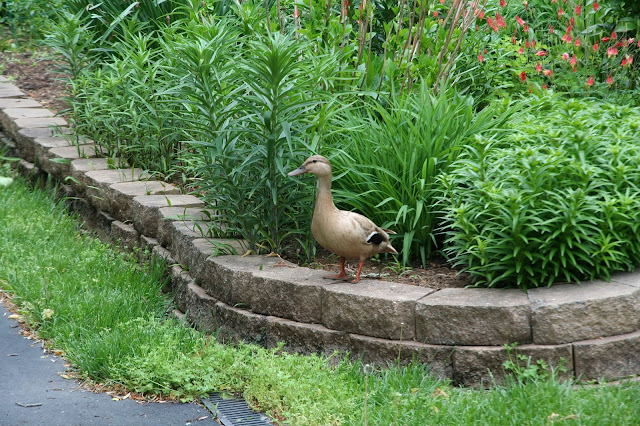 I went back to my breakfast and decided to check on this drama later.  I went outside toward the lily bed and peered in, but could not see anything.  As I pulled away, she flew out of the leaves with a big squawk and headed skyward.  I was startled and felt guilty, but I peeked back in to see if she had started a nest and below is what I saw. 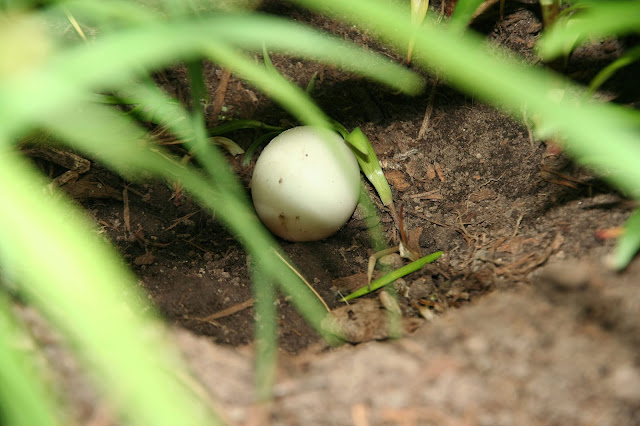 She had not had time to bury it.  She came back later in the day and dug away at the bark mulch to make a bowl, pushed the egg in and added a few twigs to hide most of it.  I did not get a picture of that.  Each day she came and laid an egg, stayed for a brief time and then left.  I started to mark the calendar in hopes of both counting the eggs and predicting that hatch.  It seems when they hatch the ducklings immediately leave the nest, so we could easily miss that opportunity. 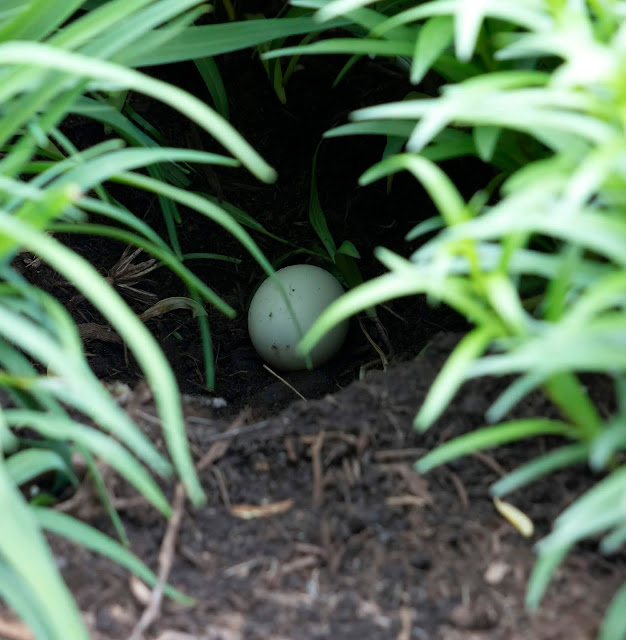 Finally, on the eighth day, she began to stay.  I read that the male totally leaves her on her own, so I guess she would have to abandon the nest briefly for sustenance.  When I walked outside, I was careful to give the nest wide berth, although it well camouflaged.  Photos below were taken with my telephoto. 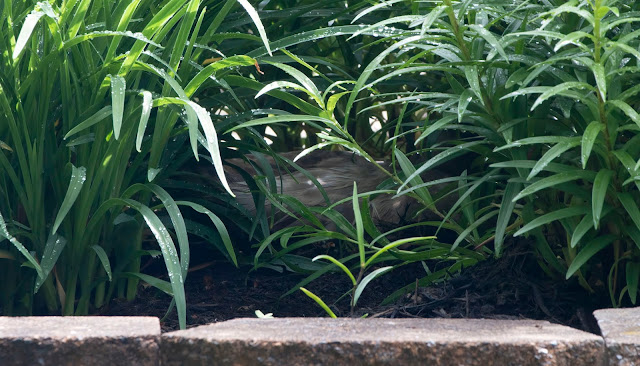 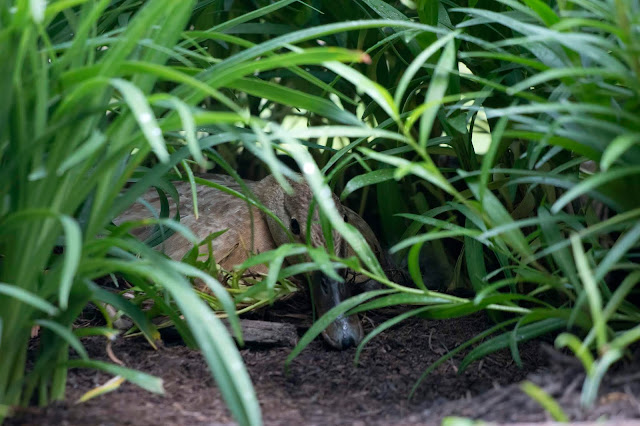 I was guessing that she was sitting on at least seven if not eight eggs.  The male was not to be seen.  A few days later I got up and looked out my front door, and below is what I saw. 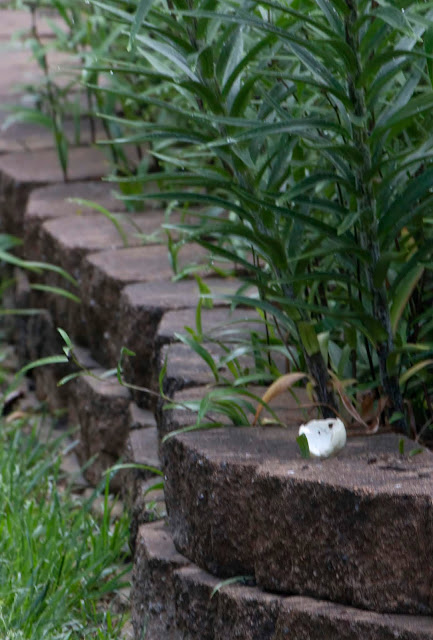 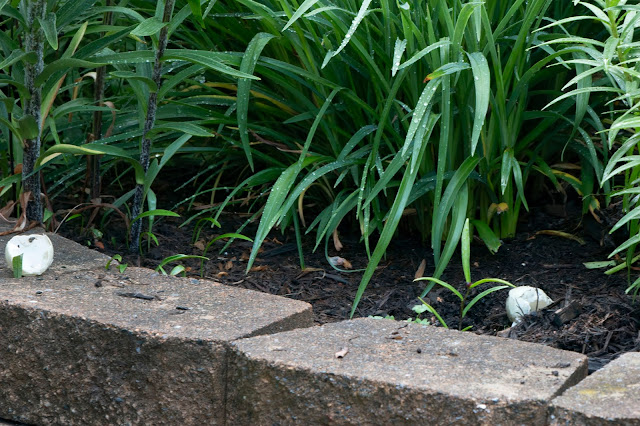 I was heartbroken!  At least three of the eggs had been raided with one shell carried over to my herb bed.  I am guessing it was a opossum as we have one who has been digging for worms in the flower beds each night.  There were still a few eggs buried under duck down and twigs that could barely be seen.  I  was pretty sure she would not be back and that was confirmed when the next morning the rest of the eggs were eaten and shells scattered around the bed.

It was a brief adventure and I am sad it ended so tragically, but definitely wonder how Mallards can be in such abundance with so much vulnerabilty.
Posted by Tabor at 9:25 AM