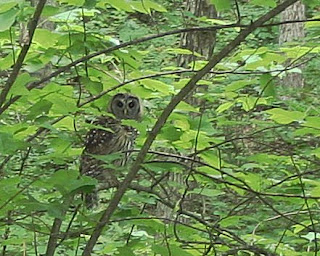 We came across this lovely owl standing in the middle of a narrow paved mountain road in West Virginia as we were heading home and winding our way down the steep side of the mountain. It stood there facing the other side of the pavement, feet firmly planted, not attempting to fly even as we approached, and giving no indication that it realized there was the danger of being hit by our car. I yelled for my husband to STOP, STOP as we came within feet of hitting the owl. Just as we got to the point of no return he/she flew into a nearby tree and I quickly took this marginally focused photo of the owl through the open window of the car. It was clearly saying something with its eyes.
I put my camera in my lap and and something caught my eye. I looked to the side of the road near where the owl had been standing. That is when I saw this little fellow shaking like the leaves on an aspen tree. He/she did not react as if knowing we were there. Both my husband and I sat in the car in panic but also with practical concern that another car might be wheeling down the winding road and not expect our stationary status. 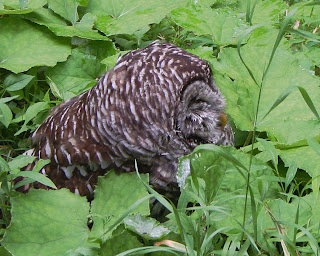 After a few seconds the owl sitting in the green leaves turned to look at what must have been a very white and scary car monster beside him/her with one eye closed in pain or damage. 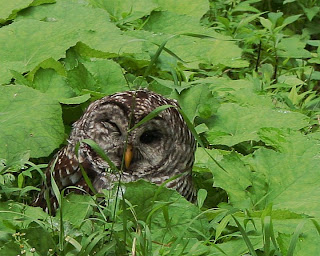 There was no safe place for me to exit the car as the ground dropped off rapidly down my side into the woods. The other side was the rocky wall into which the road had been cut. We had no gloves and I later thought about taking a jacket around the bird and easing it into the woods as we drove on, but I was also afraid that shoving it further down the hillside might injure it even more. Had we lived in the area we might have been able to call a rehabilitation number and make sure that the owl received help. I had absolutely no reception on my cell phone in the area and couldn't get reception for another hour down the mountain. It still bothers me to this day that we were not able to come up with an effective solution for all and I keep hoping that the owl that appeared to have been hit by a car was able to mend with time.
Posted by Tabor at 6:00 AM