Why the Caged Bird Pecks.

Once again my life was called upon for a rescue, partially my fault.  I stood up walking to the kitchen to heat some soup for lunch and heard a gentle thud outside against the window over the deck.  My stomach dropped as I had heard this familiar sound once or twice before during the years I have now lived here.  I looked out and down to the deck floor.  This lovely female downy woodpecker in the video above had hit our dining room window full force and then fell to the deck tucked beneath the railing at the edge.  She was there for about half a minute unmoving with her head bent awkwardly away from her body and down.  When I bent to gently pick her up, she revived suddenly and flew quickly away.  But she flew only a few yards and collapsed on the grass one story below, and then lay sprawled there with wings askew.  My heart was in my throat as I scanned the trees for hawks and as hubby ran down the steps.  He lifted her gently into his hands and brought her back up to the deck and we looked at her closely.  There was no blood and her wings did not appear to be broken and she was able to hold up her head.  Her eyes were half-closed and her beak was open as if panting either in shock or fear.  I brought her to the outside water dish and dropped some water down her beak from my fingers to see if I could revive her a little.  She gulped at the water and stuck out a little red tongue but made no effort to fly again.
Growing more concerned as she did not resist being held, we put her in the bamboo cage that had been so perfect for use with the frozen and desperate waxwing we saved last year.  She refused to leave my husband's hand as he rested it on the cage floor with his arm barely fitting in the tiny door, and she sat there dozing off and on for about ten minutes in his palm.  Hubby wanted lunch and so we were going to attempt a transfer to my hand.  As we did that she awakened with a start and flew to the opposite side of the cage looking out at the sky and pecking at the bamboo bars.  I took this video quickly as she had miraculously come back to life.  We took the cage outside.  We had to catch her inside the cage to release her and she was a little resistant, but once she was placed on the deck table she looked around for a second or two and then flew high into the far oak trees across the ravine.  We both audibly sighed and smiled.
We immediately ( well after 30 minutes) left to drive up to the nearby landscape place to purchase a half dozen decals for my windows.
Later that afternoon and after the decals were in place, she was back at the suet feeder!  She appeared in very good health.  Her mate also visits the feeder, each day so we hope they will have a nice family this summer. 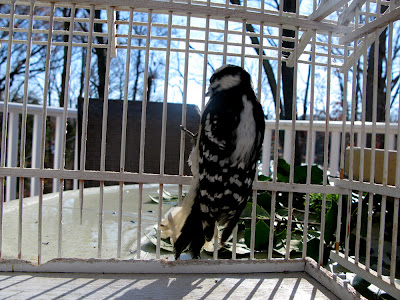