All the Little Birdies

This is a lengthy post and may require a stiff drink, a box of  tissues, and an open mind. 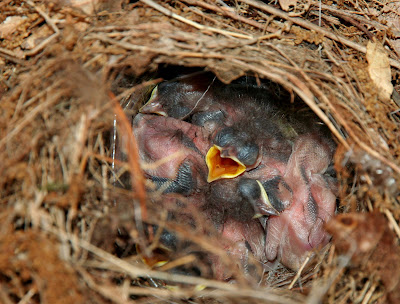 You may remember my excitement at finding six little wrens in a nest in the kayak beneath our deck a few weeks ago.  Watching them grow each day and watching the work that the wrens put forth in collecting insects was compelling.  I was worried about raccoons and other predators since their nest was so close to the ground and so accessible and I did often question the intelligence of this wren as I have the intelligence of other wrens in the past.

But bird mothers are like our own homeless mothers when they are forced to select a nest site quickly as the time is impending that they must lay their eggs.  We had some very heavy storms in the weeks prior to this and that is probably why this little dove was forced to abandon the nearby tree and selected this precarious window ledge in the suburbs of Arlington, Virginia to raise her two little ones.  (Only one can be seen here.)  It amazes me that baby birds survive at all! 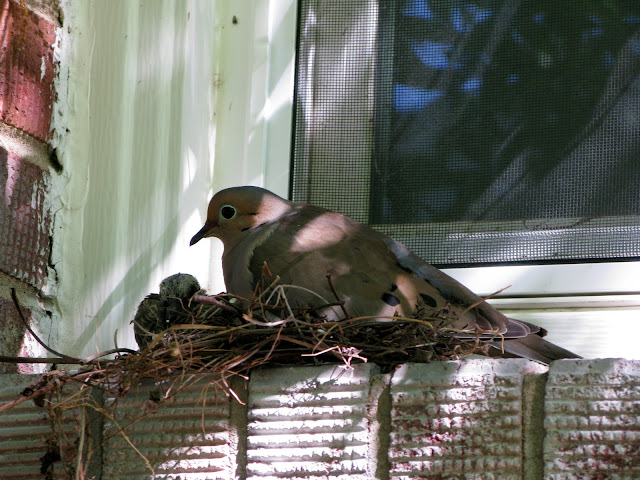 Back at my stomping grounds, a recent afternoon was filled with a mystery regarding my bluebirds that are also nesting in the bird house on the opposite side of the deck.  Both the male and female are bringing insects throughout the day, but without the speed and energy of the wren.  The mystery was why both were sitting on an iron trellis doing nothing one afternoon.  I had pushed the trellis into the lawn a few yards from their front door anticipating the danger of fledglings trying to fly to somewhere nearby to land as they took their first precarious flight.  The bluebirds just sat there for the longest time staring down at the patio.  There were at least two, maybe three, titmice, newly fledged, making a tremendous ruckus in the nearby pomegranate tree not far from the bluebirds, and I guessed that the bluebirds were irritated by this flying circus of crazy juveniles...behaving much like drunken teenagers so close to their nursery.  Eventually and thankfully the titmice flew away but almost immediately a chickadee landed very close to the bluebird parents on the same trellis. 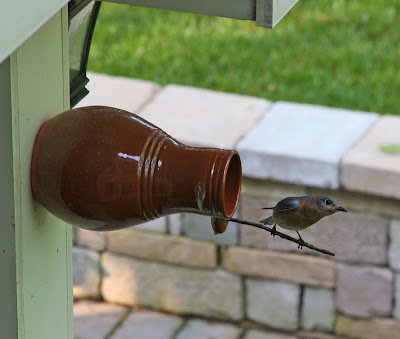 Very odd to see so many different birds in the same place!  I did not figure out what was going on until many minutes later  when I heard the wren throwing a tremendous fit on the other side of the deck perched on a nearby tree branch.

I walked down to the lower level to see what was going on.  As I lifted the kayak seat my heart fell hard into my stomach.  I saw the resident black snake curled ominously across the top of the nest completely covering it with only the rat's end of his tail draped across the red edge of the kayak.  I called in panic to my husband (who was making an important phone call) and he quickly handed me a gaff hook to go forth and battle on my own.  A gaff hook?  I had neither the courage nor the will nor the skill to gaff a snake.  This was not your traditional light weight aluminum gaff but a heavy duty tool that had been hand crafted by a friend many years ago with a very sharp hook end and a most solid handle.  Holding the gaff high above my head, I screamed at the snake, and next banged on the side of the kayak hard with the handle.  Before he gave up his larder he rattled his tail (just like a rattle snake) and hissed malevolently slithering off the nest.  He slowly disappeared beneath the black kayak seat and abandoned the little ones who seemed to still be all there.

I did not know what to do and was too afraid to really battle this fellow as snakes have me snookered before the word go.  In reality he was too small (3 feet) to do much damage to me.  Unfortunately in my banging panic as I tapped him on the head with the handle of the gaff each time he stuck it out from beneath the seat of the kayak, I managed to do some serious damage to my waist one stroke as the hook facing my side scraped me breaking the skin painfully.  This forced me to calm down, before I seriously hurt myself more than any black snake could.  I turned on the hose to see if I could flush the snake out from beneath the seat with no luck.

Finally my husband joined me and I pulled back to let the snake peer his head out and he almost immediately started to curve up toward the seat once again.  My husband with instant skill grasped the snake with the hook end of the gaff, but unseen by our eyes the snake actually thrust with lightning speed before being lifted away and caught one little bird in his mouth. The bird fell to the white pebble gravel below as my husband threw the snake to the ground.  The blind baby bird wobbled fragilely for a second.  I grabbed the warm and ever so light baby wren and put him back in the nest.

My husband looked at me with question and all I could say was get rid of the snake.  Hubby banged him hard on the head several times and then threw him/her into the woods.  He was not dead.  We learned a hard lesson the next day.  The next morning I saw the wren perched on the empty bird feeder. 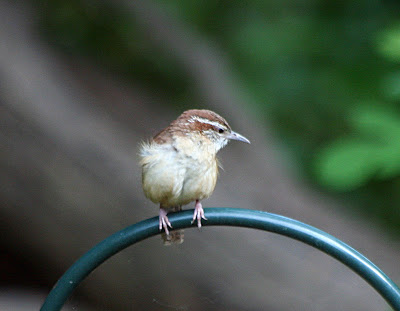 The day was still and there was no breeze, yet her feathers were quite ruffled as I watched through the binoculars.  She looked from side to side.  I put down my morning cup of coffee and went below the deck and you can probably guess that I found an empty nest.  We had not wanted to kill a snake as they are important predators in our woods, and we had adopted the wren babies as if they were our own small children and this broke my heart.  What a mess when mankind gets involved!  The snake had come back in the early morning or had a partner! 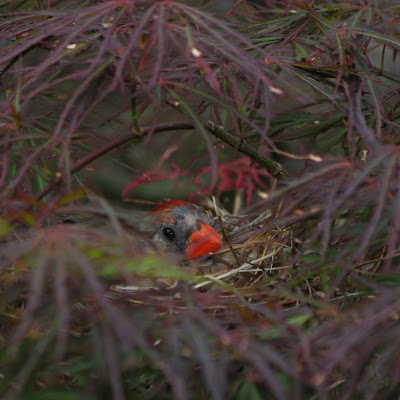 I have also discovered a perfectly engineered round nest at the top of my four foot high cut-leaf maple tree in the front yard a few days later just below my bay window.  I watched closely from the window and saw a female cardinal sitting in it as you can barely see above her shiny little eyes and her orange bill.  She is the exact color of those maple leaves.  She could barely get her big breast into the nest and she was panting open billed from the high heat of the afternoon.  I wondered if the nest was hers until I saw an egg in it a few days later when she was gone.  My husband, ever the biologist, picked up the egg one evening to discover that it had a small hole in it and an ant crawling on it.  We were very disappointed.  I went out the next day thinking to collect the egg shell and instead picked up a perfectly good new egg in the nest!  She had discarded the broken egg and had laid a new one and then a day later another one!  These birds do not need me after all. 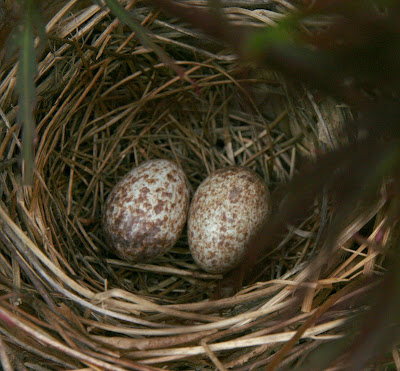 As a brief follow-up to this long soap opera on spring and birds and life, I was just now called to the door by my husband while writing this very post.  He said he saw a four foot black snake in the back yard on the lawn below the bluebird nest.  We were not going to have another tragedy if I had any say in this and I hurriedly went to my bedroom to get a pillowcase and hubby went to the basement to get that famous gaff hook.  When we got back to the place where he had originally seen the snake, it was gone!  Hubby looked around everywhere and I stood on the small stone wall that looked over the hill of the lawn toward the woods and could not see anything looking like a snake.  I was just beginning to lose heart when, with shock, we saw this below at our eye level only 5 feet away from us.  Me and my stupid trellis aid for baby birds!  This persistent snake was reaching out long and carefully to see if he could reach the opening to the bird house across the space. 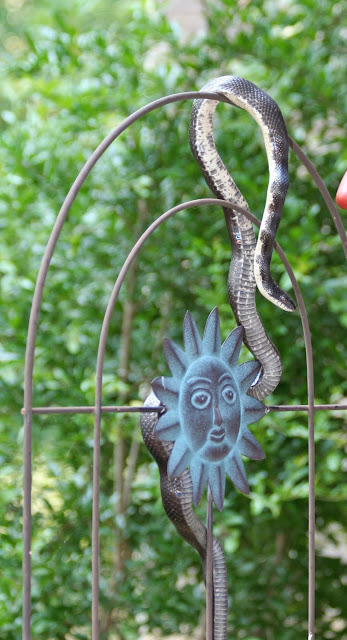 We got the snake onto the gaff hook and into the pillowcase and then took him on a three mile trip to the nearby park. There are lots of frogs and other edibles for him/her there.  Let us hope this is the end of my spring adventures for a while.  Oh, the wren couple are building a new nest in the front yard in the tiny brown bird house, an actual bird house, and unless this is just the energy of grief and shock, there is hope.