Near my front door is a four foot high and four foot wide cut leaf maple tree.  These trees are expensive to buy, and theoretically, worth lots of money as they get larger and add a certain gravitas to ones yards.  Gardeners sometimes view them as an investment...but, in reality, no one is going to pay more money for your house because you have a stunning cut leaf maple.  These plants were a big garden fad about a decade ago, when Americans thought they could add a bit of sophisticated Asian Zen to their gardens by buying and planting them.  Fortunately, for the American gardener who understands gardening as a "throw more money at it" activity, they are hardy and grow fairly well, although slowly, in almost any area of the yard.  Several weeks ago a rustling activity in the feathery leaves of this tree drew my attention as I passed. I investigated and this is what I saw giving me the evil eye. 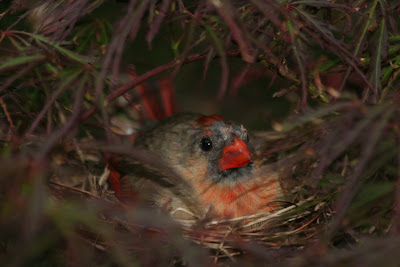 I could not help but notice that she blended perfectly with the color and shape of this tree.  Had I not heard a noise, I am sure I would never have seen her.  Nice and exciting to have the bird's eye view of a spring soap opera so close to my daily path.  I noticed a few days later, while the female cardinal was off eating, that there was one small speckled egg resting in the nest.  My husband, ever the investigative biologist, had to pick it up and examine it. 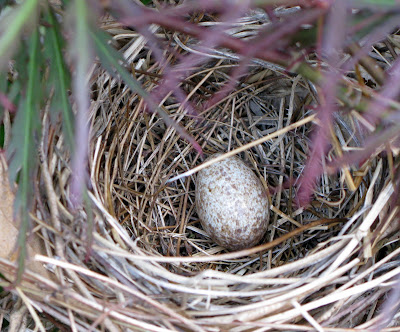 Alas, the shell had a small hole in it and was empty of any bird life.  Had the female cardinal abandoned her nest in grief?  The next day I went to collect the egg as a souvenir and found it was gone!  A day later I saw the female cardinal again sitting on the nest, and as the days passed, I was excited to see the scene in the photo below one afternoon while mama was out hunting bugs. 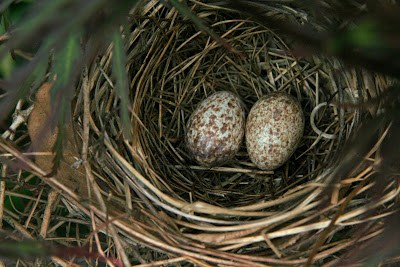 I clapped my hands like the little old lady that I am and smiled in joy.  Each day I watched the female cardinal sit on the nest.  For several days this spring(!) weather reached into the 90's F and she still sat there panting with her mouth open in the unbearable heat.  I would see the male cardinal bring her food.  It did not take long before I was rewarded with this exotic scene below. 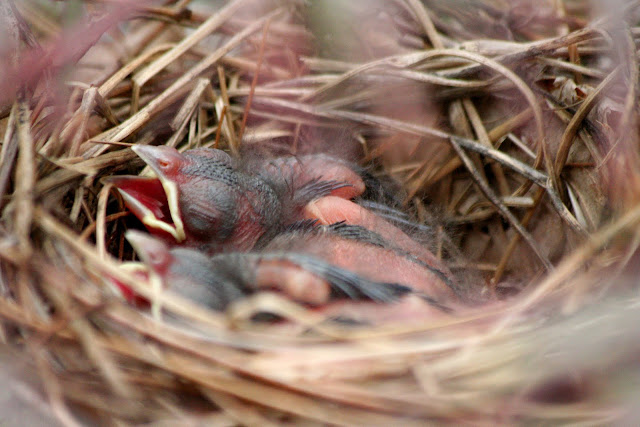 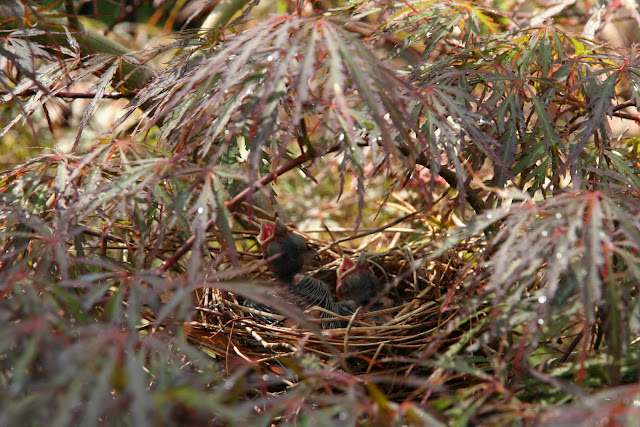 Blind baby birds.  Ugly with mouths half the width of their skulls, naked pink backs like plucked poultry for dinner and wings with pencil lead protrusions where wing feathers should be.  These two babes only a mother could love.  Both she and dad would visit the nest several times a day and bring gutsy breakfasts, lunches and dinners.  The babies would stretch their scrawny necks, open those cavernous mouths, and cheep ever so quietly, singing "My turn...My turn." while wavering on tiny legs and then releasing a pillow of white poop which mama picked up in her mouth and then dropped on the ground as she flew to the trees.  When parents were not near, they slept quietly hunched down in the nest and invisible to all.

I watched this drama at my window and door carefully each day trying to keep all the dangers these young ones faced far to the back of my mind as I cheered them on in their survival.  The spring varied from hot to cool from wet to dry and yet all were surviving.  Part II of this soap next.