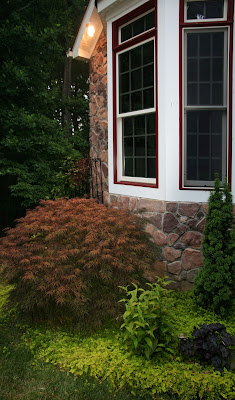 Back to the cut leaf maple tree in my front yard.  (Get ready for some preciousness.)

The drama of the cardinal family did continue.  I am an early riser and soon my morning ritual, after making coffee and while waiting for the sun to provide more than gray light, was to peak at the nest through my bay window allowing my eyes to adjust to the shadows to see if mama was sitting on the nest, and she always was.  She was very hard to see because she is the exact color of the leaves.  Later I would head out for my early morning walk around the yard allowing the security light to go on and thus see the tree in much more specific light.  This was the time that woodland birds were singing lustily and bumblebees woke from last night's drunken honey stupor drifting from their all nighter deep inside the hosta blossoms falling into the moist morning air.  During the rest of the day I could not walk by the tree to work in the yard without stopping and peeking at the two fledglings, and taking advantage of a photo opportunity. 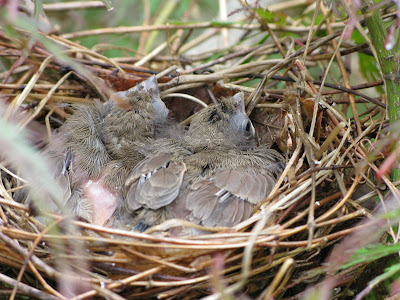 Within days the pencil lead wings were covered in soft gray feathers and the naked bodies began to be covered in soft fuzz and slits in the eyelids began to appear.  They still looked comical and alien when opening their mouths begging for food. 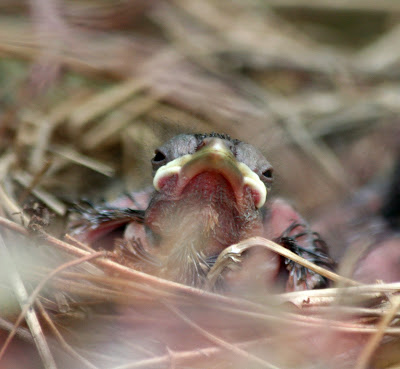 By the end of the week the first fledgling with feathered wings hopped from the nest and worked his/her way to the edge of an outer branch looking around at his/her new world with those sleepy bug eyes.  Both parents, who were sitting at the forest edge in the nearby holly tree, behaved the same we way we do when the kids get to use the keys to the car...encouragement, bravery and insane panic. 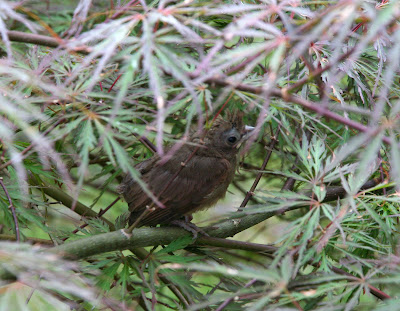 They tweeted for the little bird to join them, flitted from tree to fence line to trellis at the side of the house, tweeting and looking around.  He looks like he just woke up.  Doesn't this remind you of your teenager at breakfast?  The parents hopped across the front lawn pretending they were gathering bugs while all the while watching the novice flyer.  It took twenty minutes of persuasion and pleading before the first sibling flew 30 feet across and just a foot above the lawn and fell into my bed of pink impatient flowers scattering petals everywhere.  Dad cardinal flew to the edge of the flower bed and begged the little adventurer to fly to the net fence nearby.  The fledgling eventually made it to the fence netting but with graceless balance became caught in the net like a fly in a web and hung there awkwardly for some time. 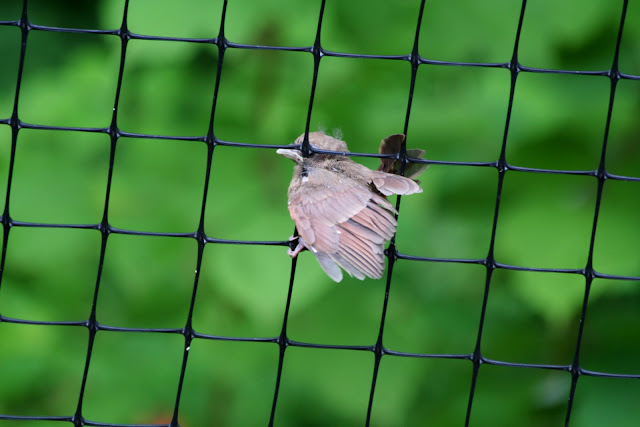 He looked about stupidly, wing caught on one side and seem to be cheeping, "Help!"  Dad refused to join the fledgling and instead gathered wild raspberries on the other side of  the fence line and held them high in his mouth as encouragement or bribery. 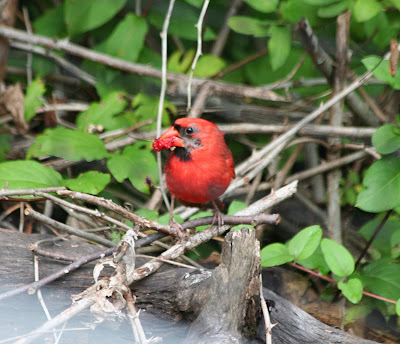 At last, this seemed to work because the bird fell through the net and then flew at a downward angle and crashed into the tangle of honeysuckle and other vines that live on an old tree snag on the woodland side of the fence.  Both parents and fledgling disappeared into the deep shadows of those vines with only the adult cardinals intense conversation indicating their location.

It took longer for number two to make his/her way to the branches.  He seemed to have an attitude problem and his mohawk haircut did not help me be more confident in his abilities.  This freak of nature was determined to wait for food delivery and reminded me of many a rebel without a cause that I have known through my teaching days. 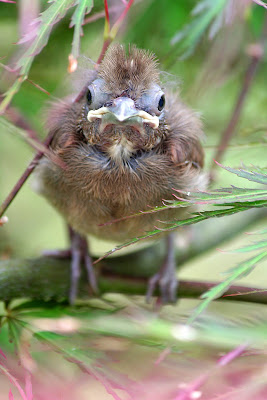 The parents hopped here and there with chirping and cheeping and whistling and all I could think about was all the attention they may be calling to any nearby predators. 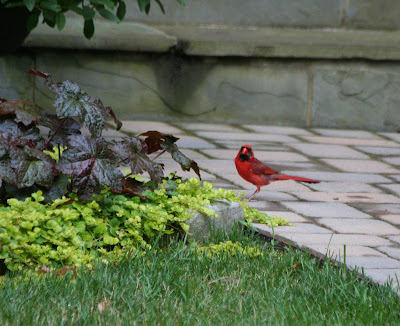 Eventually number two took a flying leap and joined mama in the nearby holly tree. There seemed to be a small celebration before he/she also disappeared deep into the darkness of the woods. 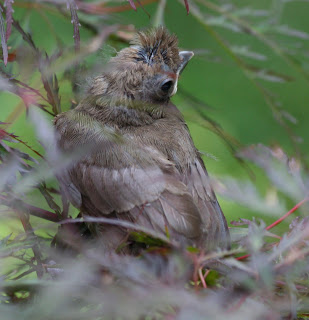 Sadly for Tabor, as in human life, this soap opera has now been cancelled and the next season picked up on location in the deep green woods where only Mother Nature could continue to watch.  The nest in the tree was empty.  It got more quiet as the afternoon wore on.  Tabor's yard became still and certainly seemed dramatically changed.  The event was over and the first and second act appeared to have been performed successfully.  Act 3 would probably not be seen by Tabor's eyes.  The next morning's coffee walk was wanting as I wondered if I would recognize anyone this winter at the feeder.  (But wait, I think I see the blue birds feeding family number two just beneath my deck, and yes, the wren has started her second batch of babes undeterred in the house in the flower bed!  All is not over yet.)