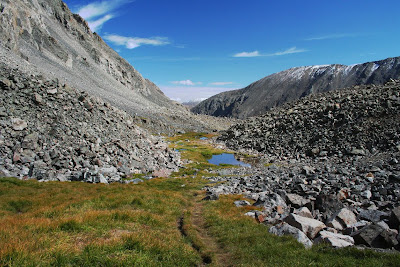 I will share with you another day of hiking in Colorado filled with dramatic views and you do not have to find your hiking boots or that worn rain parka. We hiked every day between 6 and 8 miles and every trail was so different in topography and flora and fauna. This trail took us up to about 12,400 feet. While I did not feel the hubris to attempt any "14ers" which is a common goal among hikers in the area, I felt that this climb was a more than acceptable achievement allowing me to pat myself on the back for such endurance while panting like a dog during most of the hike. I am so thankful to the powers that be in this universe that allow me to enjoy and complete this type of challenge at my age. It was mind altering as I stood in the moss and grass covered valley between the two imposing peaks of granite that will still be there erect, proud and strong, long after I leave this earth.

The trail was dry enough to miss most of the puddles of cold water as we headed up and up. The water, melted snow, was crystal clear and the moss and grasses a deep green as if it were spring. Musical gurgles of tiny waterfalls serenaded us during our small lunch near a huge boulder.

The little chinchilla-like Pika were peaking in and out of the rocks as they gathered mouthfuls of grass for the coming winter and whistling while they worked as they often do. They were the only wildlife we saw at this altitude. The lack of oxygen to breathe at this level meant I had to just enjoy the scenery while trying not to concentrate on breathing in and out. I got a vicarious pleasure at touching the snow field at the end of summer. The field is not seen in this photo but was just behind me. (I re-sized the photo above as it was too large for blogdom so if you click on it, it will be a bit grainy.) 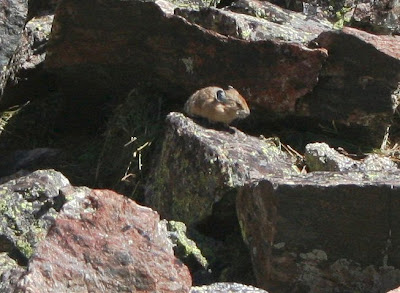