A Crack of Thunder

Fall is fully here with sticky wet leaves spinning their way to the ground between the gray rain drops leaving better and better views through the woods.  It is our first really cold day today, hanging in the high 40's F.  Last night as we sat watching television we heard a large crack like that of thunder or a rifle firing.  The sound seemed to come from across the river.  Hubby is an outdoors-man and said right away that it was the dying oak down by the dock that had finally fallen.  It was this tree's base where I had taken a picture of the Jack-O-Lantern fungus in the prior post.   This oak had started to die within months of our moving into our house, and for some reason, we felt a bit intimidated by that death as if we had caused it in some way.  It had lasted so many years and we wondered if we were we the ones that pushed it over the edge?  It spared the oyster cages which we laid at its feet. 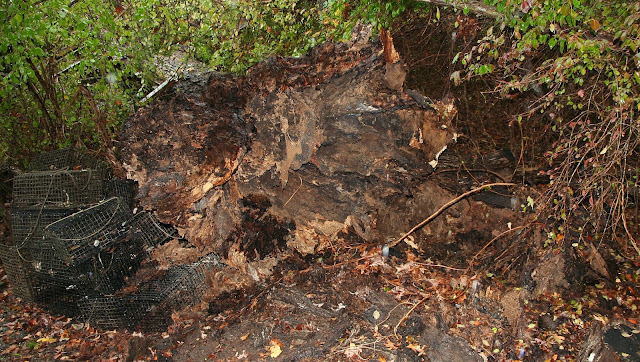 There were the remains of a hunter's stand nailed into the tree...which was perhaps the work that had eventually killed the tree.  We cut away all the dead limbs (widow makers)  that hung over the trail to the dock when we started living here.  Thus when this marvelous behemoth released his/her hold on the earth it fell away from the dock and toward the salt bush at the edge of the river.  It looked so much bigger when pushed to the earth.

A new meal for our resident pileated woodpeckers through this winter.

On a happier note, the last male osprey, Fred, left for warmer weather last week and I missed seeing, while sipping my coffee, his silhouette against the sky each day as he sat on the snag above his nest.  When the sun was out most days I saw the resident blue heron taking possession of the abandoned nest while grooming himself/herself.  (It is a terrible photo...taken in a rush!) 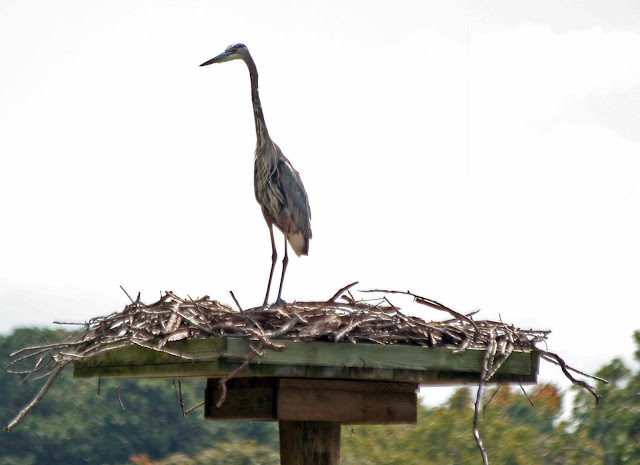 This morning as the gray day broke I saw the silhouette of larger bird on the same tree snag. At first I thought it was a vulture resting.  Then as the light grew brighter I grabbed my binoculars and saw that it was an immature bald eagle waiting for the heaviest rains to diminish or perhaps just waiting in a new place.  I hope he comes often in the months ahead even though they are very shy, but he/she will certainly move to another part of the woods when the osprey returns in the spring.  The arrival of nesting season in the spring will make these two top 'dogs' dangerous enemies.