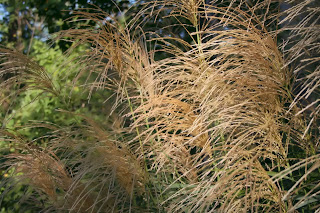 What appears above as delicate, feathery and even elegant can be like a hibernating bear in winter. We were gifted with about 8 plastic buckets of three or four varieties two years ago. Ornamental grasses can be quite expensive, so we were aware of the value of this gift, but we were moving into the house and only had time to burying them beside the driveway in unprepared soil and hope for the best. The grasses survived perhaps in anger if not humiliation at how we have ignored them over the years and spread and gave us wonderful back-lit golden borders as we approached our house at the end of the summer and fall days.

In the winter they got cut back to the ground for their dormant period and because of their size we had to use a chain saw!

Last week, we decided it was time to move a third of them to the retaining wall landscape bed, which had been our original intention. It took two hours of digging with two shovels and hours of whacking into 75 pound rooted dirt balls with a machete before we were able to break up three large plants into smaller plants and place in a long line to form a grassy wall along the garage and perhaps to prevent small children from falling into the ravine. 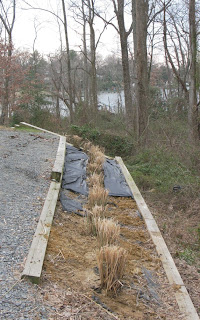 My legs are bloodied but I am unbowed. I have learned not to underestimate any plant.
Posted by Tabor at 6:08 AM