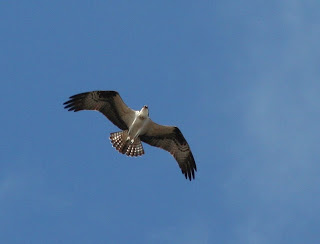 The call is a high cry, a short but piercing sound and yet sweet like it was coming from a much smaller bird. It is repeated with what seems like an exuberance and certainly an urgency. It is hard to ignore. (As usual, click on photos for more detail.)

When I first saw him alone it was early in the new spring day and the sun was just climbing up into the sky. 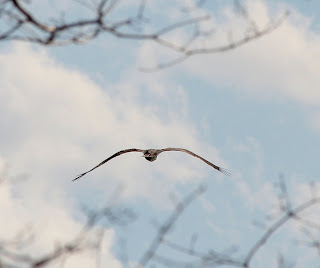 At the start, he flew low over the house and crossed the river and landed gently on the top of the old crane that sits on a barge across the river where they had nested last year. The crude, crossed-sticks nest had not survived the winter and he would have to start anew. His landing was elegant and graceful. 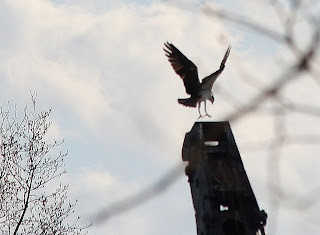 Later at mid-day, as I was working in my herb garden, I saw him again. He was swooping not too far overhead and flying back and forth above the house. He would pump his wings then swoop with a gentle dip, let the wind catch his wings and float gently backwards or hover in stasis and then cruise forward allowing the spring winds to carry him a few yards. The whole pattern would be repeated over and over along with the crying call.

Finally as the morning extended, there were two of them. Had he gone on ahead leaving their winter home in the south and told her he would check out the old summer place and wait for her to catch up? She joined him in flight and the calling continued. Then there were three flying together. Was this another male trying to woo the female or was it their child from last year?

Later in the afternoon the promised thunderstorm clouds began to form and started to hide the fingernail moon. As the sun began its descent in the sky, I sat on the deck to watch the sunset (early bird) show. One of the pair that remained settled in a tree close to the house overlooking the river and watched the other flying by sharing an occasional call. 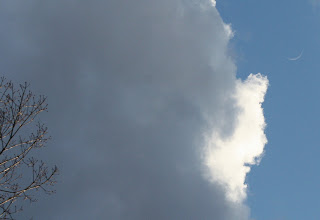 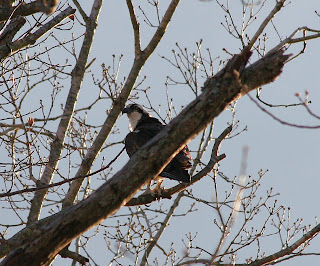 It must be nice to follow the sun and travel by the call of the changing seasons and the abundance of fish . They is so smart they even has their own genus, Pandion haliaetus!