The Golden Robed One 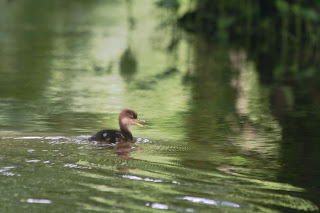 While paddling on a river that is a few hours drive my house we had been seeing wood duck boxes all along the river's edge placed at strategic intervals. Since it is late in the season and the ducks had mostly fledged I did not think I would see one. I was lucky enough to catch a photo of one fledged fellow mid-river as we coasted in the dense shade. Of course, they are very leery of people. I think this little fellow is a wood duck because of the long bill. Perhaps someone who is better at identifying than I can let me know. (Click on photo for full size.) 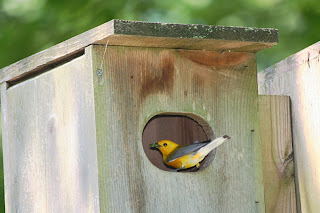 It was one of those last lovely days before warmer weather would make this type of trip a little stickier and buggier. We were really enjoying ourselves as gentle birdsong and gentle breezes and a gentle current moved us along. We stopped mid-day for a snack in the dark and swampy part of the river. It was too muddy to leave the canoe and so we nestled against the swamp grass and began to eat the food we had packed while getting a private serenade by various birds. I could hear the louder chatter of a bird just behind me. It was so noisy I began to think it was begging for some of my food. I looked up and asked out loud if it was a K-mart store bird and expecting some of my crackers which I was just going to hold out to it. When I turned to look over my shoulder I was so thrilled to see it was a Prothonotary warbler just behind us. Sitting in the hole of the wood duck box just above our heads, he was tending young and/or his mate in the house and perhaps not too happy that we had selected his front yard as our picnic area.

This bird was named by the Louisiana creoles because they thought the color of the bird was like the golden robes worn by an official who was an advisor to the Pope. This warbler usually nests in abandoned holes in trees and we actually saw another at a nest in a hole in a fallen tree in the very middle of the river later that day. The young can swim a little when they fledge...so that is useful if you are going to live just a few feet above a river. The Prothonotary visits us all the way from Central America and I felt honored to have met him.
Posted by Tabor at 6:00 AM