A Real 'Room Without Walls' 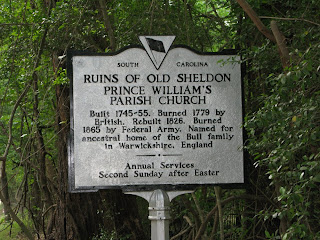 Imagine driving in the low country just north of the old historic port city of Beaufort (pronounced Bewfort) in South Carolina and coming across the sign above beside a heavily shaded narrow highway. Then imagine looking out the car window and seeing this "room without walls" in the photo below. In 1751, the church cornerstone was laid, and in 1757 the congregation held first services. In contradiction to purpose for this house for the Prince of Peace, during the Revolutionary War the church became a place to store gunpowder that was confiscated from British war ships. This ultimately led to the church's destruction by a leading Tory, Major DeVeaux, in 1779. The church was rebuilt in 1826, and burned again during our Civil War in 1865 by the Federal Army. Americans on both sides of the continent remember studying General Sherman's march to the sea and the destruction he left behind. 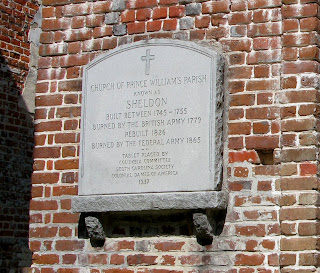 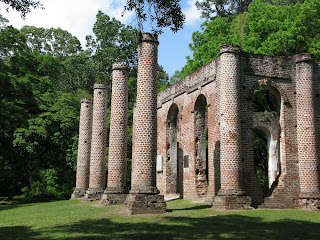 Stunning architecture called 'temple-form neoclassical structure' and an old graveyard made for a mystical spring afternoon in the low country of South Carolina. 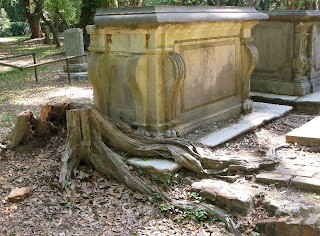 The remains of this strong tree's roots crawling over the tombstone are an interesting photograph and makes one think about how temporary everything is...or is not. 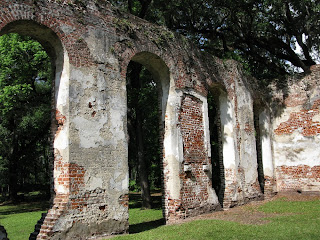 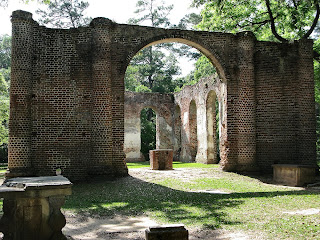 Click on the photo above and then think about the plantation families that founded this church as their anchor in the strange land they had arrived at from England. I wonder if that was the remains of the pulpit in the middle of the open church. Imagine slaves who assisted in the construction of the church or the survival of the rice plantations during the wars and how strange this land was to them as well.

Now the rice plantations are mostly gone as are most of all plantations except those available for tours. During our departure we stopped at the nearby canal in the marsh to chat with a black family (descendants of slaves?) netting crabs on a Saturday afternoon and I took this picture of another descendant in time. 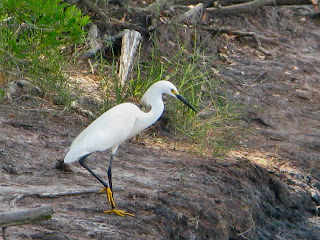