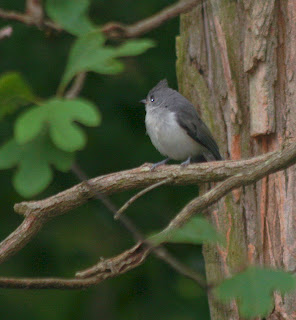 There is a charming newly fledged titmouse that has been hanging out beside the bird feeder for several days now. He/she is just so huggable. It is rewarding to see him as the little ones don't seem to stay around for long. 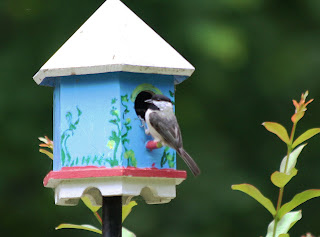 This photo was taken earlier in the week. (Remember the house with the laundry trailing out the front door?) Mom and Dad chickadee had been exhausting to watch. Removing every insect they could find in my yard they arrived continuously throughout the day. I peeked inside the house earlier in the week and saw at least two little faces with open yellow billed mouths panting inside. Two days later I returned from shopping and the parents were no longer darting inside. I looked and the nest was empty. They had fledged and I had missed it. 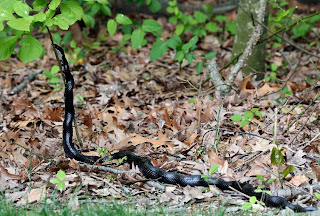 The blue bird story is sadder as we noticed no activity for weeks and upon finally opening the box we saw an empty nest. Even the eggs we had seen earlier were gone and there were no broken shells. Perhaps my five foot long friend here pretending he is part of a small oak tree beneath the bird feeder had something to do with it. He is not as talented as the tree that was pretending it was a bird.